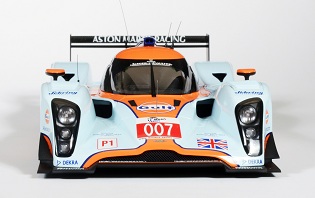 Lola / Aston Martin’s Gulf Oil-liveried #007 LMP1 prototype dominated the 2009 five-race Le Mans Series, winning the Team, Constructors’ and Drivers’ Championships, and was the highest-finishing gasoline-powered racer to complete the 2009 24 Hours of Le Mans, finishing fourth behind the diesel powered cars of Peugeot and Audi. Powered by a raucous production-based engine, and liveried in the iconic powder blue and orange of Gulf Oil racing, this car brought back welcome memories of races from the ‘60’s and ‘70’s when Gulf cars played such an important part in the action. AUTOart’s #007 accurately captures the stance and aesthetics of this wonderful race car. The outside skin is all about cast-in aerodynamics and applied graphics atop AUTOart’s amazing paint; with four antennae and a pitot tube bristling from the cars surface, along with the small body latches and through-the-body fender vents, the little details do a lot. Underneath the skin, the non-functioning suspension and power plant detailing are mostly shrouded beneath carbon fiber ducting and plumbing, as in life; opening the cockpit’s delicate doors exposes a no-frills, single-seat interior replicated in understated accuracy. If Bond were a race driver…  – Bill Bennett 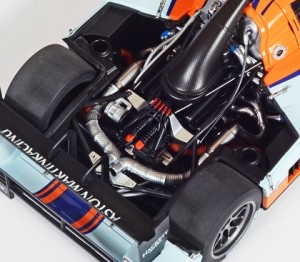