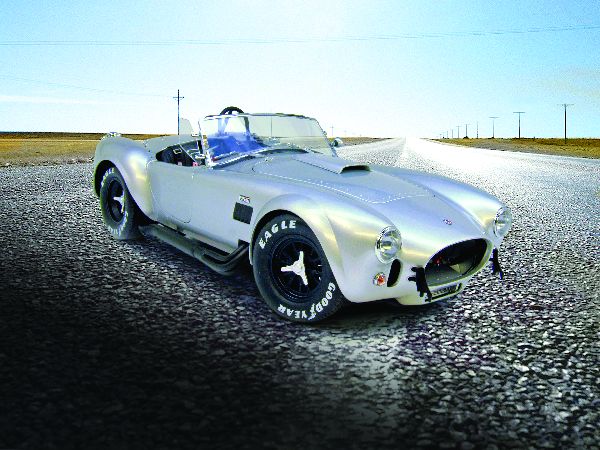 EXCERPT FROM THE WINTER 2012 ISSUE OF DIE CAST X!

…. Thus was born the Shelby Cobra 427 S/C (Semi/Competition), and thereby a new chapter in the Shelby chronicles. Not all of the S/Cs went onto the public roads; out of the 53 cars built on a specially widened and trussed “Mark III” chassis, approximately 20 full-on racers got sold to privateers, equipped with Ford’s 427 FE “side-oiler” V8, a 42-gallon fuel tank, and a 4-speed top-loader transmission firing into a Salisbury rear end. Stripped of all amenities, the less-than-aerodynamic roadsters were still capable of between 165 and 180 miles per hour, and blasted from 0-100 in well under 14 seconds, depending on gearing.

Once the racers had found homes, the balance of the cars left the Shelby works wearing full windshields, and a few had customer-specified options. But each retained aggressive side-dump header exhausts, roll bars, and the same jack-point-cum-bumperettes that the competition cars had. Both the racers and street cars remain the most desired of the production Shelby Cobras.

Kyosho’s new silver 1:12 Cobra 427 S/C carries that desirability on four wide, blacked-out Halibrands. This is the second of the K-crew’s big snakes; the first car was a chromed-out show ‘n’ go bomb wearing Guardsman Blue paint and crisp white stripes. This non-liveried version keeps the prior release’s deep detailing and heavy feature list, but stows much of the glitter in favor of a serious, in-your-face attitude.

Attitude? The model practically snarls on display, and the fine-grain metallic paint exaggerates the car’s wide fender flares and powerful, ready-to-pounce stance. The doors, hood, and trunk open on perfectly spaced shut lines, and the sharpness of the casting, especially around the wheel wells, adds to the realism. So do the secondary details, like the Lucas “PL” headlamps, and the pin-sized dzus fasteners around the cockpit. From the hinges on the wind wings to the dazzles cast into the taillight lenses, nothing seems out of place, or out of scale; even the steel fins in the car’s side cooling vents seem just the right thickness.

It’s when you stop ogling the model and start handling the car that the real fun begins. You’ll want to be careful around those bumpers; they stick out just far enough to get damaged if you’re not paying attention. With all of the finger fun at the ready, distraction comes easily; almost everything works or is poseable, including the wing windows, the sun visors, the side-view mirror, and the fuel filler cap. The hood and trunk have working, twist-lock handles, and the doors snick open and shut on spring-loaded catches and smooth, tight hinges. It’s a quality piece, and a great visual from nose to tail.

Not very many reviews include raves about a model’s frame this early in the verbiage, but this one warrants a few choice words. The backbone consists of two huge metal pipes, with attached outriggers holding the floors, fuel tank, suspension and exhaust pipes in place. The stoutly cast main section is sweet, and wears a trick detail where the cross members connect the beefy main tubes: simulated welds. Though there are no brake lines—just an e-brake cable—the fully detailed and articulated suspension, which seems to flex at a scale-correct level of pressure, is built up from delicate metal castings that jounce and rebound against real steel sprung coil-over shocks. Think that’s cool? Check out the working ride height adjusting screws. Turn them down, and the car gets lowered; back them off for a more street-ready stance. If that doesn’t get you giggling, check your pulse.

The heart of this beast is a medium-riser solid-lifter 427 that’s been detailed with only a few “noble” materials. Not to worry: the metal bits that do appear on the braided oil cooler lines, the air cleaner mesh, and the wrapping on the tachometer cable are placed onto a nicely cast and painted silver block and heads. The big four-barrel carb sits in its heat-shield bucket, lording over a scrupulously clean engine bay with tall, “427”-badged chromed rocker covers and a wired and plumbed firewall. At the sides, cooling ducts and reservoirs are mounted to the wall; up front, a trio of push/pull electric fans are mounted fore and aft of the tilted radiator. Like the oil cooler below it in the car’s nose, the unit’s been sheathed with a glistening photo-etched screen.

One of the car’s highlights is the dashboard, which is built onto a matte black backing. Fronted by a faux wood-rimmed steering wheel (with real steel spokes), the clear-faced gauges are so convincing that the needles on the tach and speedo seem to float above their printed faces. The wee knobs and pulls are no illusion; they’re separate castings fitted precisely onto the binnacle above a carpeted floor, ahead of soft-touch seats. Woven textile “Simpson” harnesses are threaded through photo-etched buckles, and the clasps at their centers are made from carefully folded metal pieces. Like the height adjuster set into the roll bar behind the driver’s seat, these look operable, but thankfully—lest you be tempted—they’ve been permanently affixed to the seat bottoms, atop small “leather” squares.

The trunk is neatly done, but not the kind of place you’d expect to find engaging detail. Among the metallized “aluminum,” there’s a fuel pump mounted to the side wall, and the deck lid itself stays aloft on a cool friction strut; add points if you’re just happy to have a place to stash the included black snap-on fabric tonneau cover.

A couple of the details may or may not impact the hardcore Cobra fans out there hoping for a period-correct, original S/C. That would be nice – but it is not happening here. The boldly logo’d Good Year Eagle tires, for instance, are too current, and so is some of the hardware under the hood; the silicon green sections of cooling hose, the anodized fittings on the relocated oil filter, and the too-small-by-half fuel tank seem to be more in line with a resto-modded or “continuation” piece than a historically accurate, vintage S/C. So, if you’re seeking a replica based on chassis CSX3001 to CSX3053, you’ll need to look elsewhere, at least for the time being.

But if you’re looking for a solid, hugely entertaining model of a contemporary legend, go for it. It’s a beautifully engineered and built piece, and, to be fair, Kyosho makes no statements or claims to this particular car’s provenance or history. For that, the buffs will have to wait and see how this all bodes for the planned race versions they’ve purportedly got on deck for later this year or early next. In the meantime, hats off to the greatest American roadster. 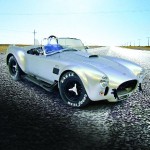 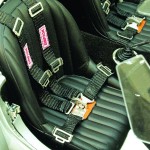 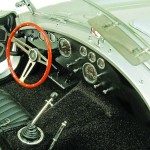 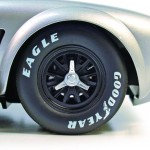 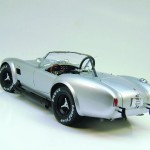