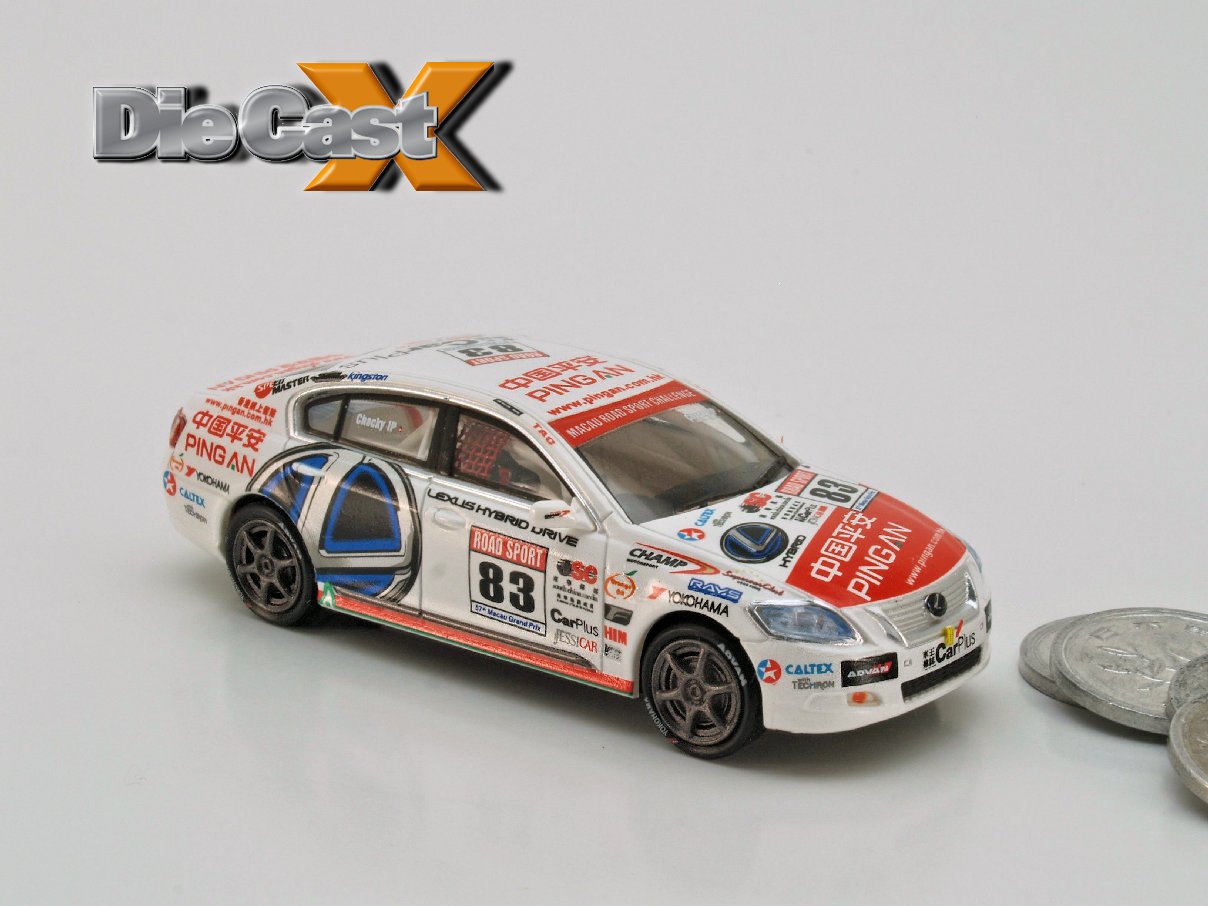 Back when the Internal Combustion Engine was first making its presence known, folks would put money on impromptu horse vs. automobile races. The horses, who needed nothing more than a bale of hay and a shot of spur to get them motivated, would usually be at the finish line happily chomping oats while the home-tuned cars (which needed substantially more in the way of coddling just to start and run) would get sidelined with mechanical maladies.

Now, the car’s the horse, and new technologies that emerge compete not against the automobile, but for a place under its hood. Hybrid power, Hydrogen fuel cells, and electric drive are all vying for a spot onboard the next generation of cars. And there’s no place better to prove a concept’s mettle than on the race track.

That’s what makes this wee Lexus GS450h from XCO Models (distributed through Daboxtoys.com) so interesting. The little image replicates the first Hybrid-drive car to be entered into the Macau Grand Prix, in 2010. Though the GS didn’t come across the finish line with the laurels, its 3.5 liter V6/electric motor driveline, as spurred by Chacky Ip (Chief Editor of Cars Plus magazine) had it munching its oats in a respectable 17th place, while much of the remainder of the gas-only field was still out on the road course.

The replica is a pretty high-tech piece in and of itself, and this maker claims that the neat little resincast body represents the first of its kind in regular 1:64 production. As a result, it’s lightweight in hand – but it’s also fairly heavy in its detailing. The model’s been finished in white and tattooed nicely with high-quality decals, and six-spoke wheels and clearly marked Yokohama Advan race rubber is tucked into the wheel wells. Between those wheels is a well-detailed relief cast chassis, also of resin, and finished in black, and terminating in sweet little hollow-point exhaust tips.

New 1:64 collectors, take note: at around $25.00US, this isn’t a Hot Wheels, Johnny Lightning, or a Matchbox-type collectible, and though the steel axles allow for the tires and wheels to spin, it doesn’t roll like one, either. No biggie; this one’s made to look cool standing still, and that it does. Individual lenses have been detailed and fitted into the front and rear of the casting, and the closed-windows glazing is clear – a good thing to note, because the race-gutted interior is fairly eye-popping, with a full-on roll cage, a detailed dash, a safety net behind the glass, and  – get this – a race harness with a  photoetched hasp on the lone driver’s seat. There are insects that weigh more than that single element, and its inclusion, particularly in a spot where it can easily be missed, makes the model all the more intriguing.

It looks like XCO has an eye for detail in unexpected places; the good news is that thanks to Daboxtoys, equally unexpected pleasures, like this relatively exotic, out-of-left-field piece, are available worldwide.