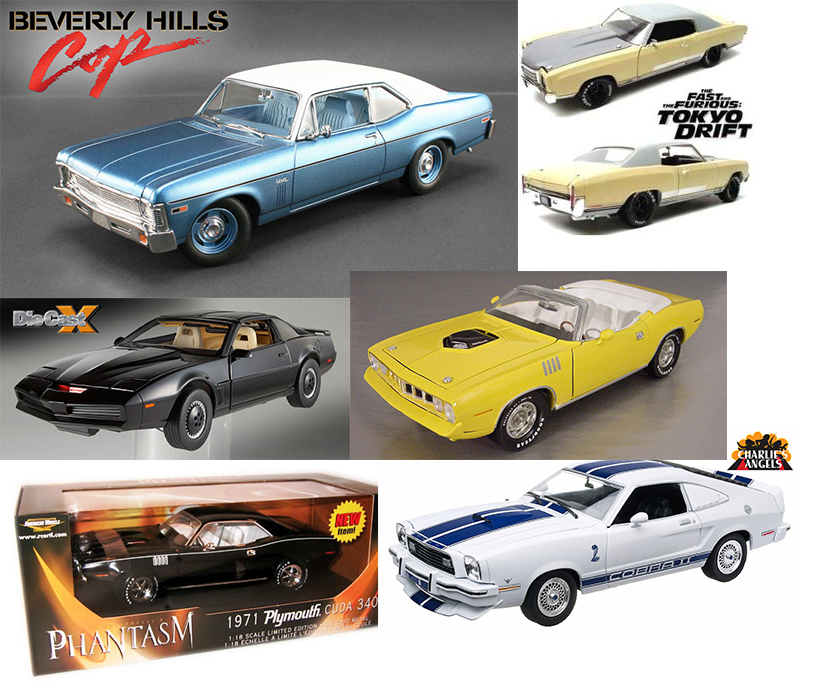 An interesting news item showed up in our inbox this week: an announcement that the ’71 Chevy Monte Carlo that made such an impact (literally!) in the opening scene of the third Fast and Furious film — Tokyo Drift —  is coming up for auction this weekend. According to Hemmings, one of the 5 surviving (of 11) F&F Montes will be listed with Julien’s Hollywood Legends. The pre-auction projection is for $50-70k, but the current owner is a fair bit more…”optimistic.” He’s hoping for $1 million! 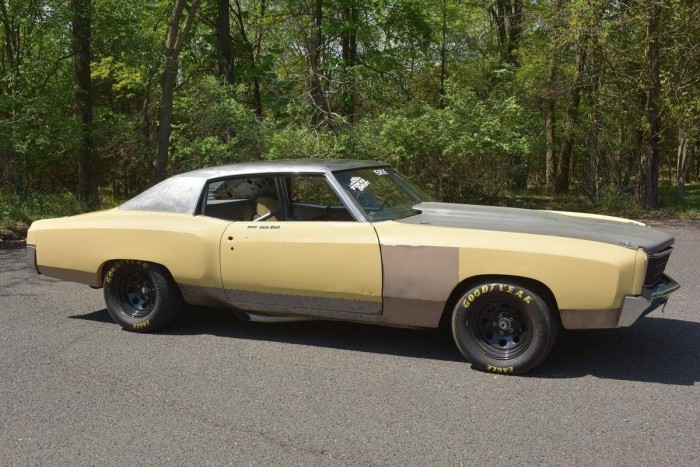 Now, We think that the big Chevy — with its primered panels and beater body hiding what amounts to a Saturday night stock modified car underneath — is way cooler than some of the gaudy tuner cars that dominated the rest of the film. But a million bucks?!? Especially since while some of the hero cars built for the film had big-blocks and 4-speeds, this particular car was built as one of the stunt cars for the jump scene so it sports a 350, an automatic, and a beefed up suspension. 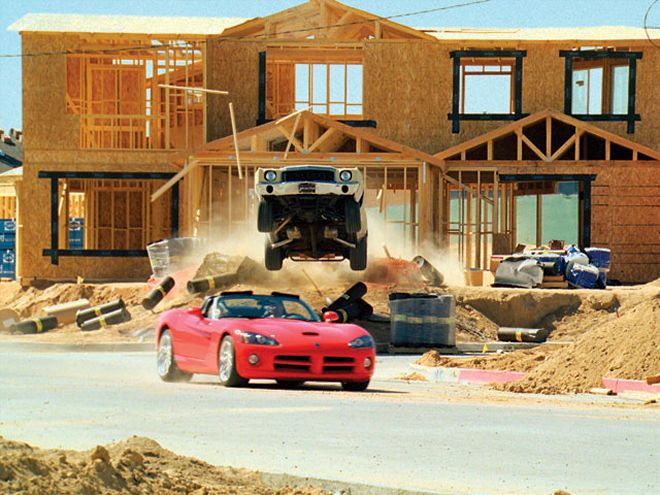 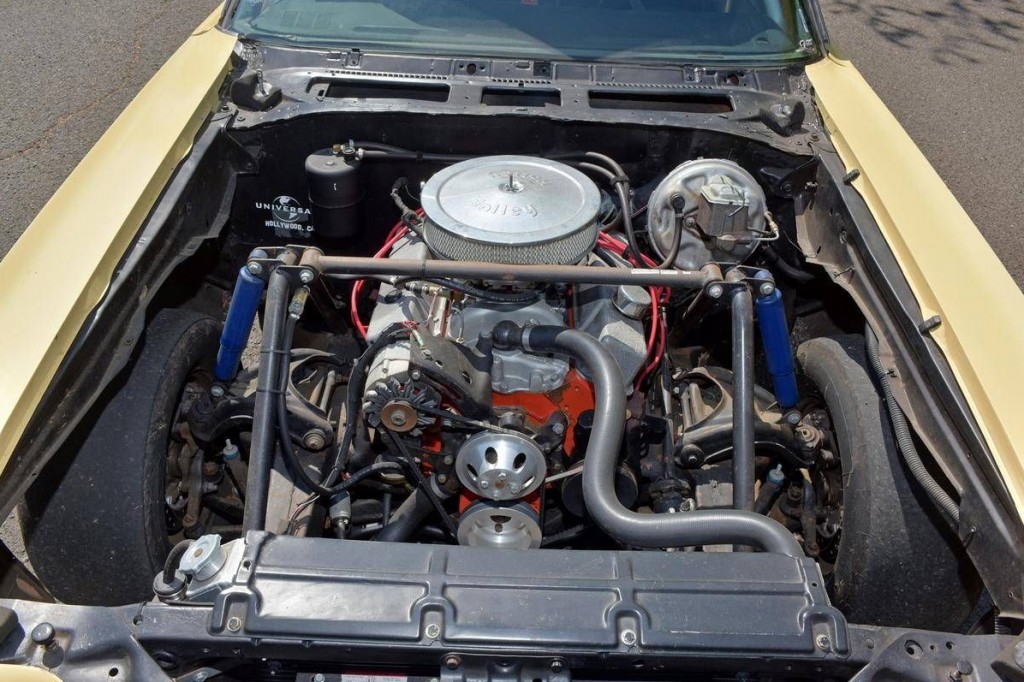 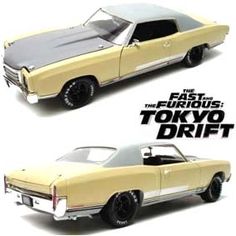 It’s by no means scientific, but one of the ways we gauge demand for a car is by the diecast it inspires, and let’s be honest — while the 1:18 F&F Monte Carlo Ertl did several years ago is a solid model for the money, it isn’t exactly a speculator’s goldmine. You can still find them today at or near MSRP. For that reason we suspect that the sale price of the auctioned car will probably fall a bit short of  the seller’s 7-figure ambitions.

But this got us thinking: What other movie and TV cars that are represented in diecast might be over- or underrated in the minds of fans and collectors? So here are five more star cars whose reputations don’t necessarily match where the rubber meets the road: 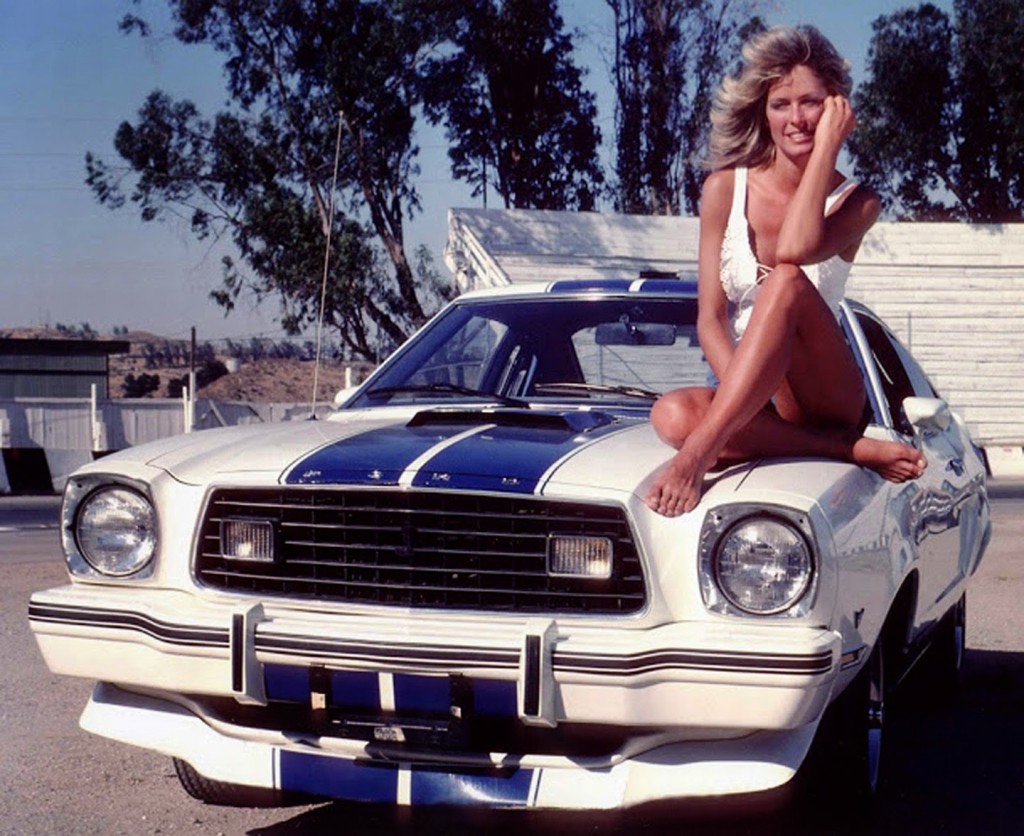 Yes, there’s actually a 1976 Mustang in this photo. (Well, sort of.) But despite the aesthetic upgrades (and some stuff done by Ford too) underneath it’s essentially a Pinto-stang. As such, it’s more of an interesting historical footnote than a desirable car on merit. In that sense, GreenLight’s 1:18 replica might actually be more collectible than the original. And it has the virtue of being the most attention-grabbing version of a Mustang body style that has been largely ignored by the diecast world.

(Plus, talking about it gave us an excuse to use that Farrah Fawcett pic.) 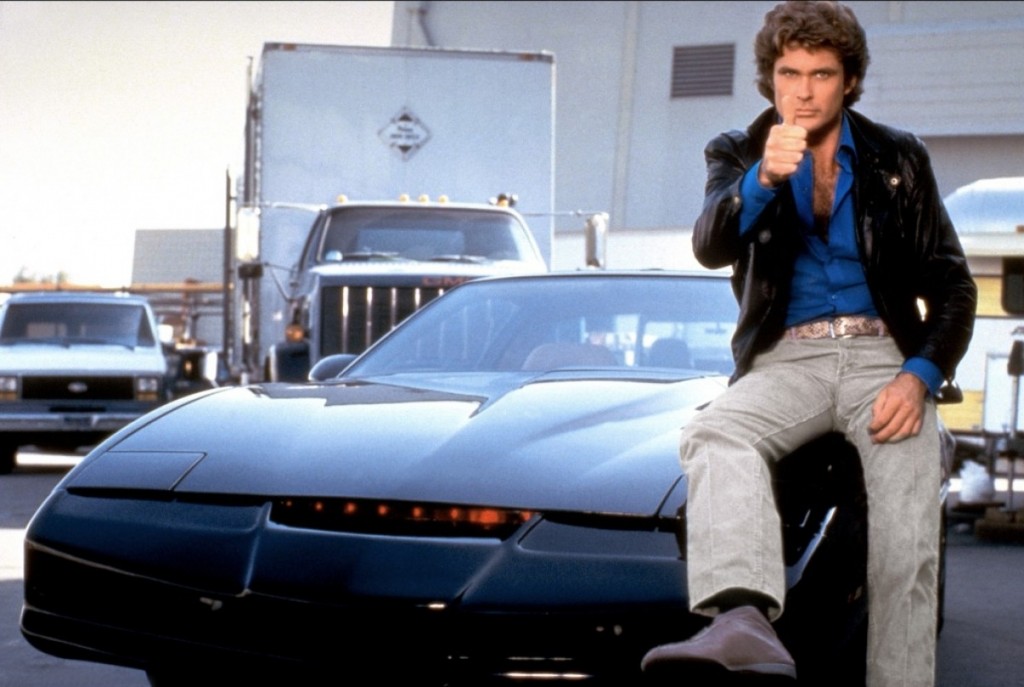 Yes, there’s a 1982 Trans Am in this photo. When you get past the Cylon-esque sweeping LED “scanner” it’s pretty much a stock ’82 Trans Am in all it’s “Crossfire-Injection” 165hp, 3-speed-slushbox-equipped glory. 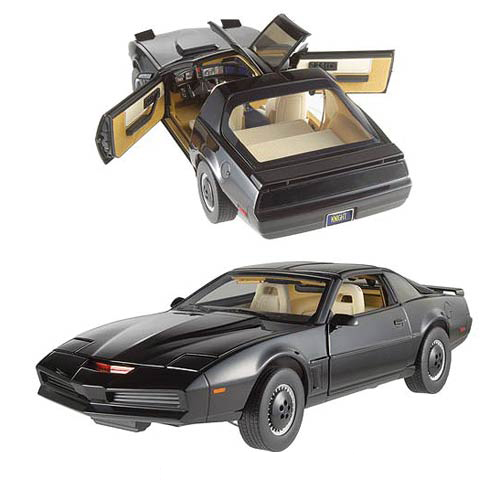 KITT was about the hottest machine on TV in 1982, even with that awkward lump on its hood (and we’re not talking about the cowl), but these days Knight Rider — and the ’82 Trans Am — are looking a little dated. Still, it’s super-nostalgic for those of us who grew up in the 80s, so the Hot Wheels Elite 1:18 version of KITT is highly sought after. (The ‘Hoff? Not so much.) 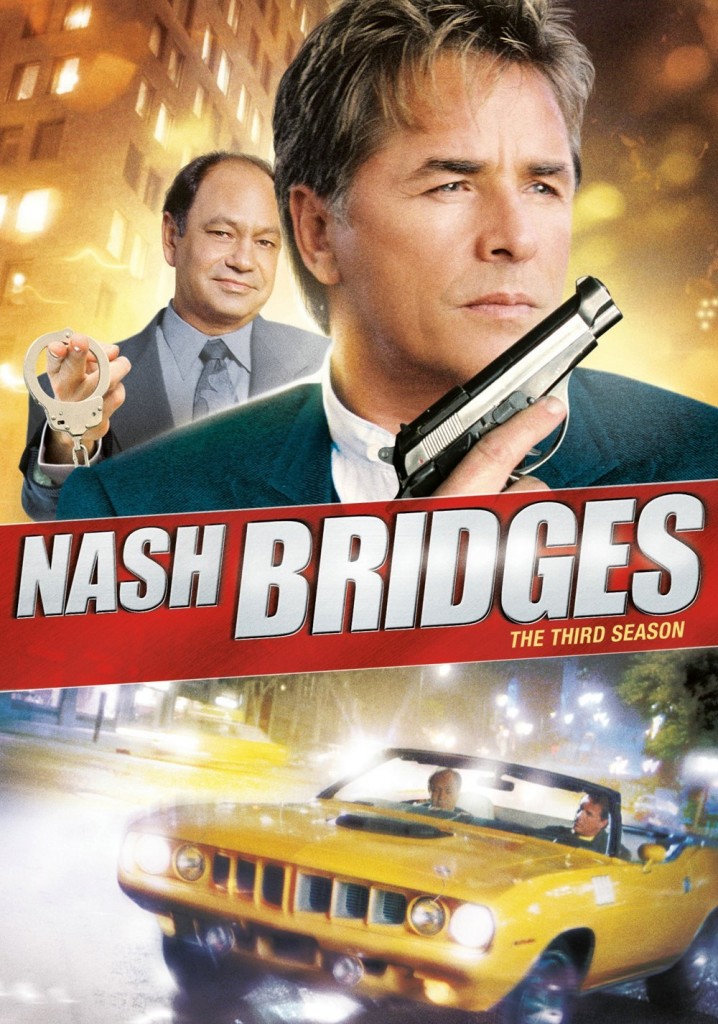 Don Johnson struck car-guy gold with his faux-Ferrari Daytona Spider in Miami Vice, but his comeback series Nash Bridges came off a little tinny, despite liberal screen time for another rare ragtop replica. This time it was an ersatz version of the Holy Grail of Mopar muscle: the 1971 Hemi’Cuda convertible. Johnson himself specified the ‘Cuda, evidently not concerned that only 12 ’71 Hemi’Cuda convertibles were ever actually built by Plymouth, and that the surviving examples today sell for TRIPLE what authentic examples of his Miami Vice Ferrari do–upwards of $3 million! Even droptops with more humdrum engines are rare–only 294 ‘Cuda convertibles were built in total with any engine in 1971–so the prop guys for the show used 1970 models updated with ’71-spec grilles, fenders and valences. The cars were painted Lemon Twist with white interiors, which actually was a color combo of one of the dozen originals. None of the show cars actually had Hemis though — most had 340s or crate 360s. 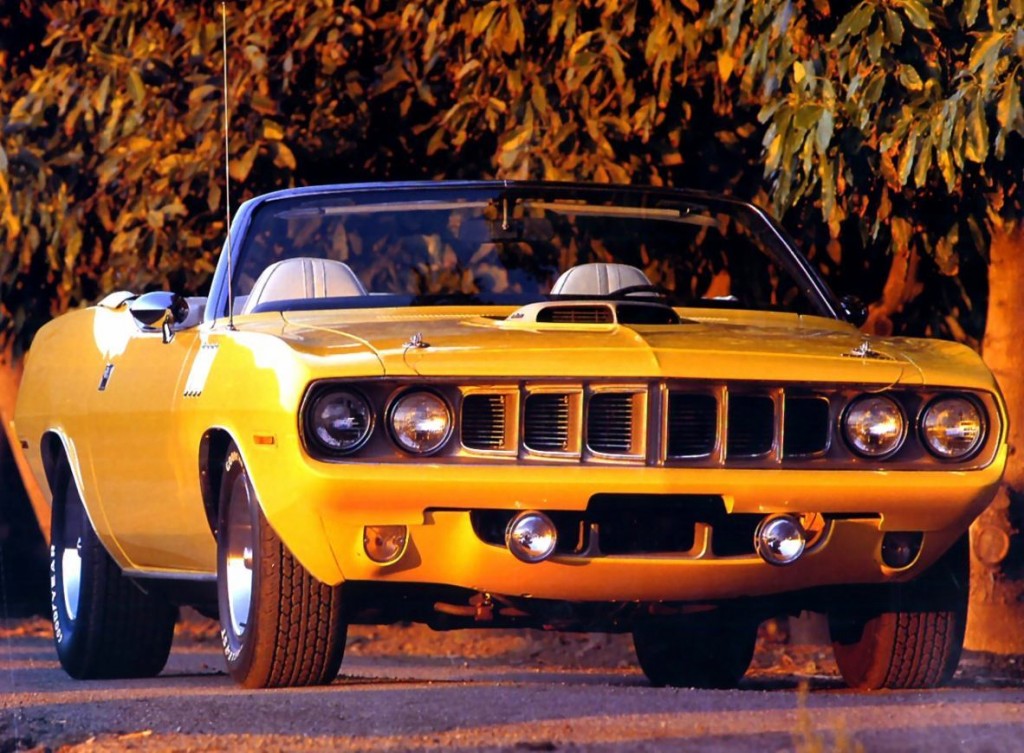 Ertl released a version in 1:18 during the show’s 6-season run, and although the casting suffers somewhat in the authenticity department, it nevertheless does have some collector value these days. For 1:64 fans, Johnny Lightning also made one. 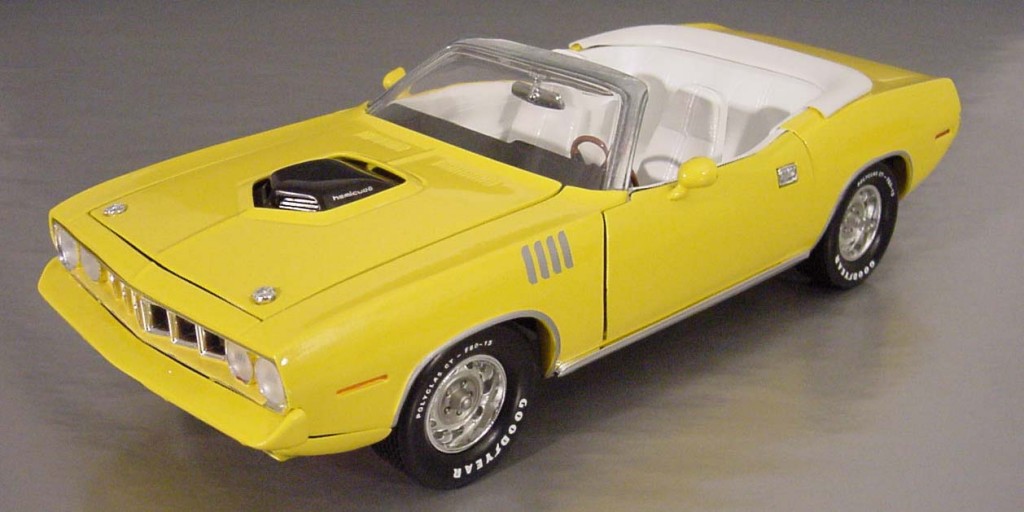 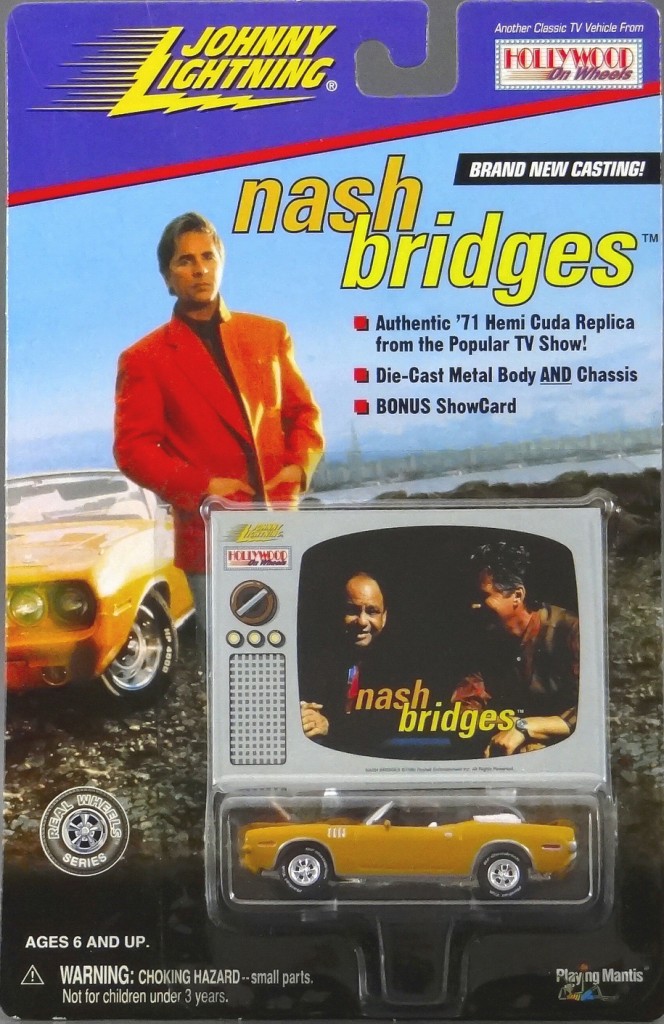 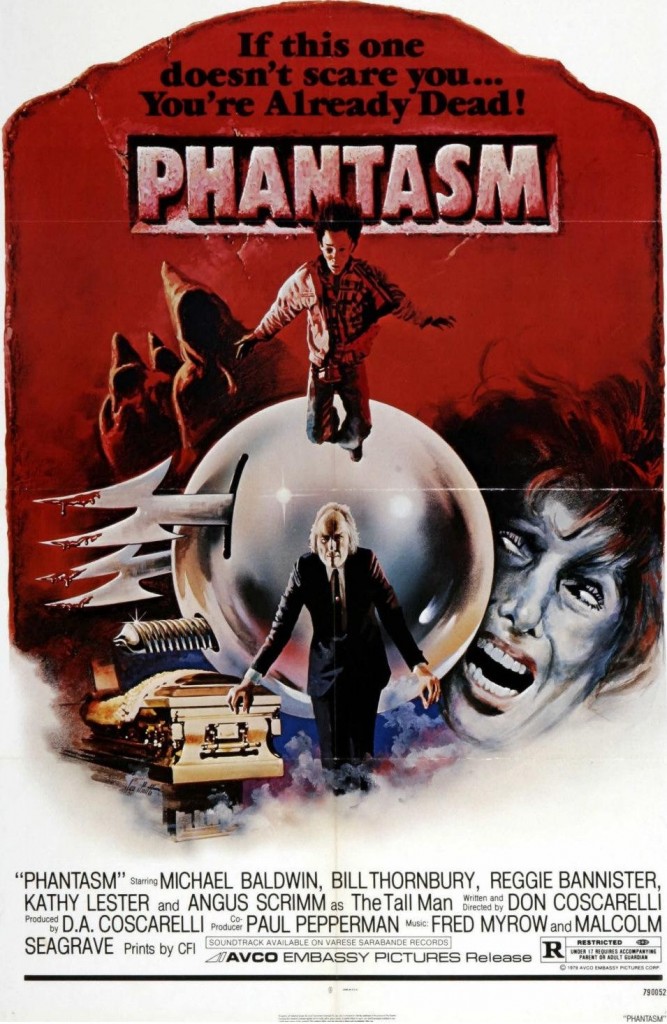 It’s appropriate somehow that the hallucinatory horror flick Phantasm should have spawned one of the most mysterious and fleeting movie Mopars ever. The low-budget film had just one car to work with, and at the time of its making 1979 the ’71 Cuda hardtop had no special significance or value, other than that director/writer Don Coscarelli was a Mopar fan and his script called for a stereotypical class-of-’79 highschooler’s muscle car. The car featured a mildly lifted rear, pinstripes, fat BFGs on Cragar 5-spokes, and an aftermarket sunroof and fender flares — very disco! It wore 440 badging, but it was actually a 340 4-speed car. It went to a member of the crew after  the film was finished, and he subsequently sold it for $1000. (Ouch!) Rumors have swirled for decades of its fate, but it has never resurfaced. Sequels brought in a bevy of ’70 and ’71 coupes and convertibles — most Hemi clones — but a few minutes of grainy film footage is all that remains of the original Phantasm Cuda! 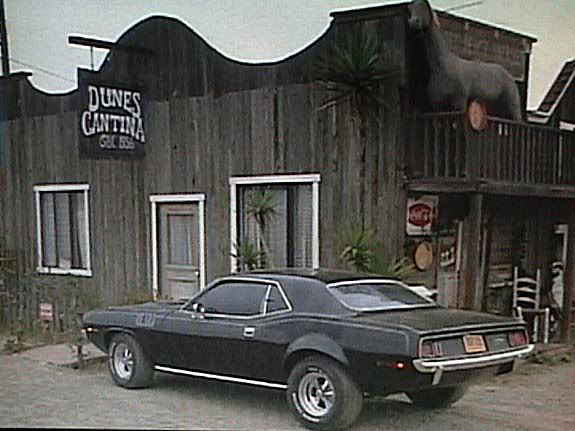 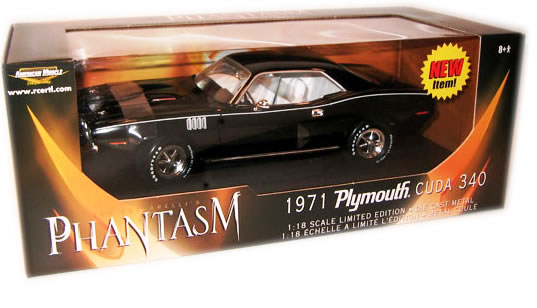 That didn’t stop Ertl from repurposing its ’71 Cuda casting (the same one used for the Nash Bridges car in fact–but with a roof,) into a truly horrifying rendition of the Phantasm car. None of the custom touches were attempted on the model, save the Cragars. As such, what you got was basically a stock ’71 Cuda 340 model in black, packaged in a Phantasm box. They are collectable for sure, but not very accurate to the movie car. 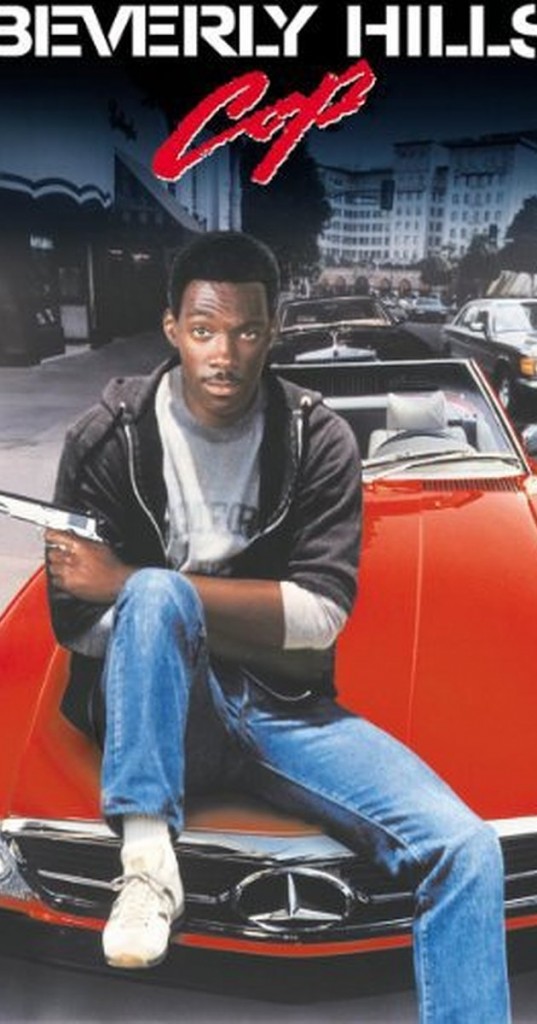 Last, we have a model that has just been released — Detective Axel Foley’s 1970 Chevy Nova from Beverly Hills Cop. This is an odd one. BHC is not really thought of as a car film — although the opening chase/crash sequence with the 18-wheeler set to the Pointer Sisters’ soundtrack is pretty action-packed. And while the beater Nova gets a fair amount of screen time, it never goes fast or performs stunts. In fact, it barely starts! 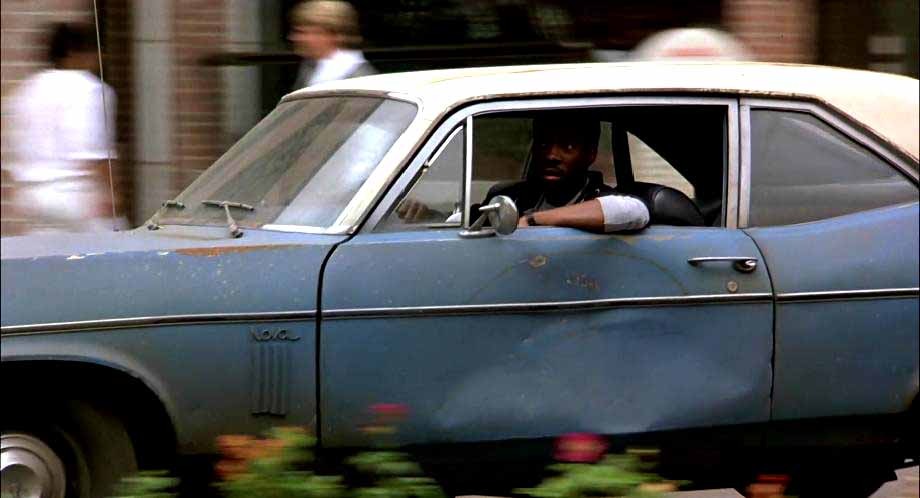 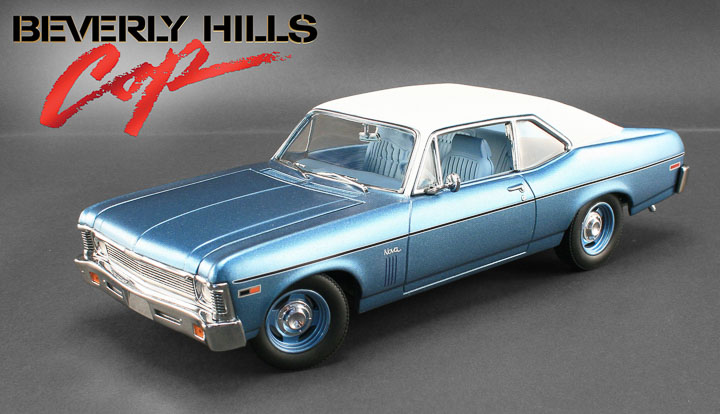 To be Axel’s car this one needs to spend a few minutes in a media blaster, followed by a week submerged down a drain pipe.

So there you have it. There’s no denying the appeal of Star Cars as subjects for diecast. And as we can see here, even fairly lame real cars can make for interesting — and desirable — diecasts. Likewise, some truly awesome onscreen machines end up falling flat in scale if not done well. One thing is for sure though: for as long as the automobile plays a pivotal  role in movies and TV, manufacturers will keep replicating them in scale, and we will keep collecting them!