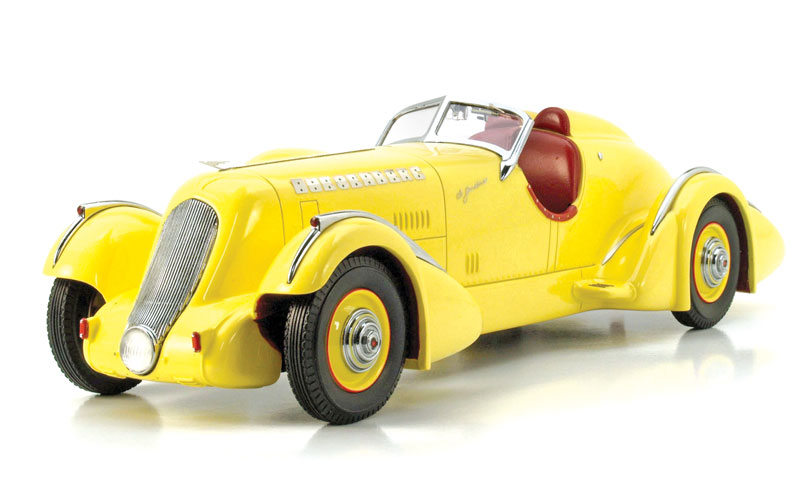 Automodello Mormon Meteor
Speed records were big news in the 1920s and 1930s, in the air, on the ground, and on the water. Among the daring fellows who were pushing the envelope – to occasionally fatal levels – David Abbot “Ab” Jenkins was a bit of a celebrity on terra firma, with more automotive speed records than any other American driver. In 1934, Ab took a near-stock Pierce Arrow (and a heavy right foot) to the salt flats, and set time-distance speed records on every notch of the clock, from one hour all the way to 24. This got the attention of one Roy Faulkner, president of Duesenberg, who saw the potential for some much-needed publicity, and offered to build a special race car for Jenkins’ use in 1935. Ab took Faulkner’s offer.

Working out of a lean-to garage behind the factory, Augie Duesenberg himself supervised the modification of a short-wheelbase (142.5”) SJ chassis, and the preparation of two special 390-horsepower supercharged Duesy engines. Neither the car, nor the two engines, were given serial numbers; the racer was listed simply as the “Duesenberg Special” in company records. Herb Newport designed a slender, low-drag two-seat body with a canted-back radiator, a long tapered tail, a full belly pan, and a big, un-muffled side pipe exhaust. The body was sleek, but it was also clever: the fenders were designed with removable centers that lowered the car’s coefficient of drag.

Ab picked the car up at Duesenberg’s Indiana factory and drove it back to Salt Lake City, where the cycle fenders were removed, leaving behind the “Special’s” aero fairings. The split windshield was replaced with an unpainted aluminum wind deflector, and the passenger headrest was removed, to improve air flow all the more. Nobody called it such yet, but the “Mormon Meteor” – a name the press would soon use, conjured up from Jenkins’ faith, and the car’s incredible speed – had been born.

Engine failures ended the first 24-hour attempts, but on August 31, 1935, Jenkins, with Tony Gulotta spelling him at the wheel, set new records on the Bonneville 10-mile oval – 152.1 mph for one hour (besting an Auto-Union race car at Avus), and 135.47mph for 24 hours. That last record saw the car travel 3,523 miles and on its final lap, the Duesenberg Special went past the timing stand at a blazing 160mph.

Period photos show the salt-encrusted car stripped down for record runs, missing its passenger headrest and fender tops, and wearing the bare metal wind deflector. It didn’t stay that way for long. The “Special” was now a celebrity; Ab cleaned it up and drove it back East for publicity photos. He purchased it for the bargain price of $4,800, and over the years the car was re-powered for other record attempts, until Jenkins retired the machine from competition, ultimately using it as a daily driver in his duties as mayor of Salt Lake City. It still exists, with an award-winning restoration to its 1930s glory. Ab Jenkins passed in 1956.

Automodello has just released this stunning curbside 1/24-scale resin model of the car in its Pebble Beach-winning configuration. There are dozens, if not hundreds, of photos of this restoration in magazines and on the web, and Automodello’s model matches them perfectly. While 1935 photos appear to show a cast-iron header and the tailpipe bending up slightly just behind the cockpit, the model is exactly as seen in current photos. The big, heavy resin body is literally flawless with deeply, yet finely, engraved panel lines, crisp louvers and scoops, and rivet head detail, all placed as they are on the real car.  Automodello’s high-gloss paint is among the best we’ve ever seen on a model; taking into account all the variables that can affect a color choice – lighting conditions, background colors, camera settings, the choice of hues by the printing-press operator for four-color magazine prints, etc. – and the fact that Automodello had access to the actual car,we’d bet their colors are right, all the way down to the body-colored ring in the plated hub cap.

All the trim is done with either chrome-plated or photo-etched parts, including the delicate “Duesenbird” mascot, the segmented hood hinge, a hand-operated wiper, and a couple dozen scale-size screw heads. The chrome “Ab Jenkins” script on the cowl has an almost invisible clear protective film, but those big block “DUESENBERG” letters are photo-etched; on the right side of the hood, they’ve been carefully bent to conform to the manifold bulge. The big chromed exhaust pipe is hollow and its end is correctly “scarfed.”

Cockpit detail is just as complete, with dark red upholstery wearing a very realistic sheen, and a patterned “rubber” floor mat. Individual pedals are mounted correctly, and the plated shift and brake levers are there too. The Meteor’s instrument panel is described as dark blue, but it looks black in photos – and that’s how you see it here, wearing gauges with plated bezels and legible faces. Above it, a thin, clear windshield fits into a plated frame; speaking of glass, the Meteor’s single “cyclops” headlight, set low into the car’s sloped grille, has an accurately fluted lens.

Aside from the Meteor’s unique (for a Duesenberg) dropped front axle, there’s no chassis detail, but that would have been covered by the full-length belly pan anyway. Want a nit? There should be a couple more thin horizontal bars in the delicately cast grille.

There haven’t been a lot of new 1/24-scale models lately, and Automodello’s new Mormon Meteor is as accurately and beautifully made a replica on display as any we’ve seen in this scale. As one of the most significant and widely publicized Duesenbergs ever built (and a beautiful car in its own right), it’s one of many historically important – not to mention beautiful – replicas we hope to see. Automodello is clearly on to something very, very good. Highly recommended.