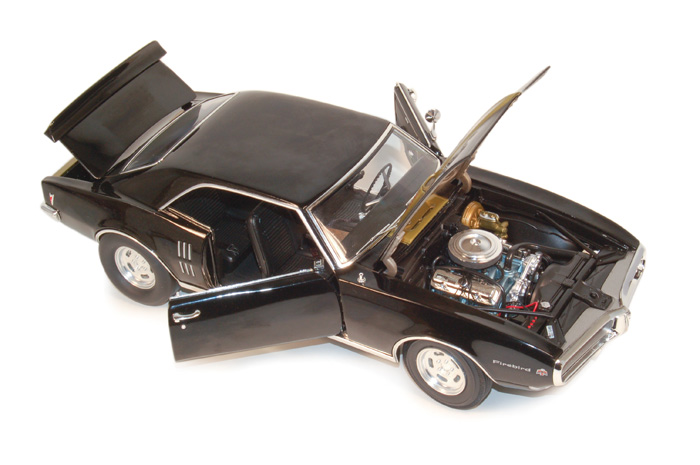 As soon as 1968 Firebirds were available, the parts manager at aDetroit dealership ordered one he intended to build up for street racing. Delivered in black with “Light Peach Gold” trim, it had the Ram Air 400 engine, “three on the tree” column shift for its Hydra-Matic transmission, and air conditioning! Although the black Firebird became a familiar sight at Detroit street races, it wasn’t until Jim Wangers, legendary marketing maven for Pontiac,bought it in 1970 and dropped in a “backdoor” experimental Pontiac 455 cid V-8 with all the hop-up parts his friends at Pontiaccould provide that the “Blackbird” gained such notoriety as theabsolute ruler of Woodward Avenue that it was featured in the March 1971 Popular Hot Rodding and January 1972 Super Stock and Drag Racing magazines. 

The Blackbird’s reputation among Firebird enthusiasts, coupled with the fact that it still exists, made it a natural choice for the first release in ACME Trading Companiesnew series of ’68 Firebird models. What you see here is one of the first “color samples” to reach these shores, and as such, there will be many changes made in production versions.  The Black and Peach Gold paint matches photos very well, with crisply printed“400” numbers; nameplates, portions of the side window trim, lamp housings, and the rear fender trim are all printed chromewith other brightwork done with plated parts. Everything opens,of course; under the hood of this early sample is a stand-in small block and manual gearbox, but ACME says production models will have correct big-block engines and Hyda-Matics—possibly in both “original” and “Jim Wangers” versions of the Blackbird. Interior detail is just as good, with nicely done upholstery (includingthe oft-neglected headliner), plated handles and cranks, fabric belts, wood-grain console trim, and detailed instruments. Chassis detail includes separate hydraulic and fuel lines, good suspension detail, and correct skinny front wheels and tires with wide rear rims carrying slicks. Blackbird’s massive traction arms are missingand hopefully those will be on the production models, too. If ACME makes the necessary changes while preserving the paint quality and level of detail, Pontiac fans are in for a treat. —Wayne Moyer