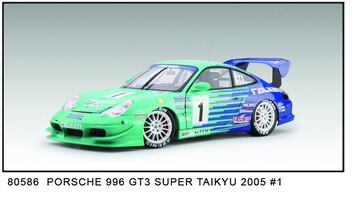 Never heard of Super Taikyu? This is Japan’s national series for production-based road racing, and it translates roughly as “Super Endurance”. What it really means is “super-competitive”, as the nearly stock vehicles (rules are based on the FIA’s old Group N touring car regs) produce exciting side-by-side racing by some of the world’s most recognizable performance cars. Along side the Subaru WRXs, Mitsubishi Evos and Nissan 350Zs are a number of BMWs and — of course — the Porsche 911 GT3.

As part of its sweeping Porsche 1:18 race car series AUTOart produces several Super Taikyu series competitors. Two of the newest are these ’05 season GT3s. Interior detail on the roll cages and dash panels, as well as gorgeous wheels and brakes show what it takes to transform a 911 into a champion.