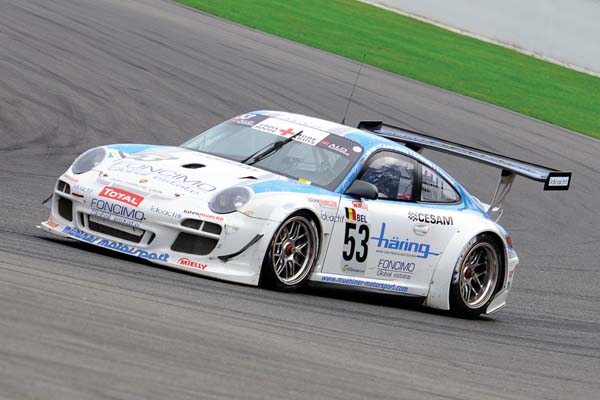 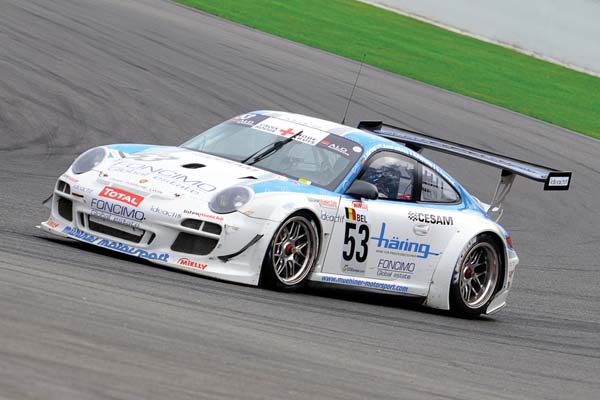 IN 1998, after winning the 24 Hours of Le Mans (overall) for the fifteenth time, Porsche shut down its factory-backed race effort. The official word was that the move had come in the name of saving some sorely needed cash. Though the years of victory had been sweet, the race program had proven hellaciously expensive. BY BILL BENNETT

But the tale wasn’t over; far from it. That same year, Stuttgart decided to play the part of Santa, and began an effort to provide factory-built race cars available for sale to interested buyers. These cars would give privateers a shot at racing, and allow further development of the breed, while freeing the factory from footing the bill for their care and feeding. The Porsche GT3, in its different versions, came from that decision, and Porsche has been making these works- built glory machines for their customers since 1999.

The GT3 series of sports cars includes the GT3, the GT3 R, RS, and RSR; the GT3 Cup, and the GT3 RS 4.0. These are serious pieces, and come (depending on version) with fuel cells, modified suspension and brakes, special lightweight body panels and glazing, roll cages, and fire bottles. Powered by either a 3.6 or 4.0 liter flat six (based on the engines used in the Porsche 962 and 911 GT1 endurance racers), these normally aspirated, water-cooled machines are built to conform to the rules of the various sanctioning bodies where they race, including FIA, ACO, SCCA, and the JAF.

GT3s have shown their mettle when being raced in the United States, Europe, the Middle East, the Asianmainland and Japan, by winning their class in all events where they have been entered. In addition, they have won, overall, the 24 Hours of Nurburgring six times, the 24 Hours of Spa twice, and the 24 Hours of Daytona.

Not all the victories have been on the track. In a hearkening back to the days of the 356, some of these models are approved for street use as well. Not that the cars are what you’d call comfy; GT3 road cars arrive in the owner’s driveway minus their rear seats, rear speakers, air conditioning, sunroof and any sound deadening. Bigger brakes, manually adjustable racing seats, roll cages and 6-point harnesses are also available. Porsche’s goal, obviously, wasn’t plush motoring—these cars were built to meet the performance expectations of every player, from professional racing teams all the way down to the “gentleman racers” who use their GTs for transportation, between full chat track days.

The goal has been met, and the Porsche GT3 RSR, in particular, has been a popular car for 1:18 scale diecast manufacturers such as AUTOart, PMA/Minichamps, Hot Wheels, Welly, Norev, Bburago and Sunstar. We’ve picked three makers. 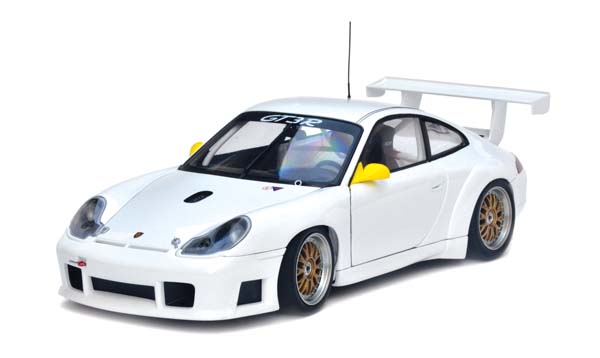 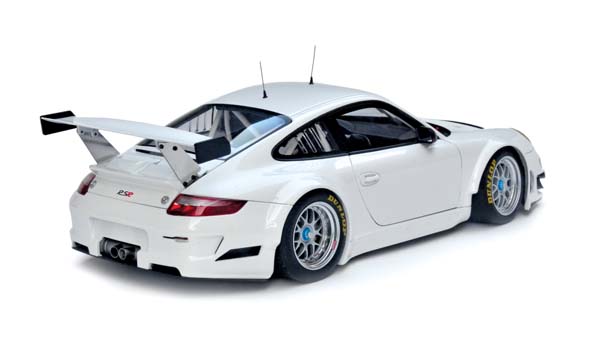 Above: This white 997 can be adorned with custom decals or admired in pure, non-liverled form.

AUTOart has manufactured both the 996 (1999-2005) and the 997 (2005- 2011) versions of the 911 GT3 R & RSR and, typical of AUTOart’s work, both of these cars are magnificent. And there are a slew of them; AUTOart is a prolific manufacturer, building many of the cars that raced in series’ worldwide, as well as non- liveried models in versions of the car dating back to its introduction.

Of course, there’s an element of consistency among all of the Aa pieces, and the stance of the cars and the shut lines in the castings are exceptional. The metal finishing of the bodies and of all of the pieces used rates as among the best in the hobby, and the paint and applied graphics are just amazing. The glazing and lensing are also top-notch.

AUTOart uses tons of photo-etched pieces to represent latches, windshield clips, and aerodynamic supports, and these add a great deal of realism to the models. Cockpit and engine detail, as well as the detail under the front bonnet, is also at a very high level. The tires are scuffed and lettered, and wheels wear a satin metallic finish that looks just like the real thing. That top-to-bottom realism is a hallmark of this maker—and makes these pieces breathtakingly collectible. 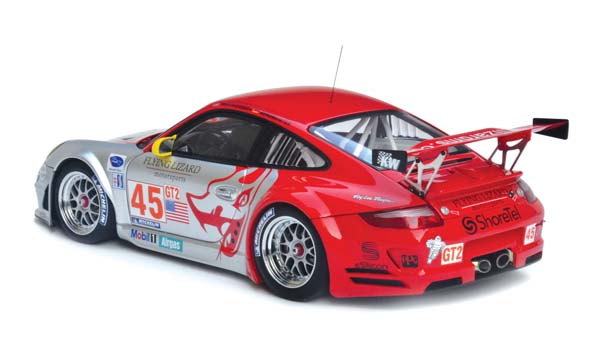 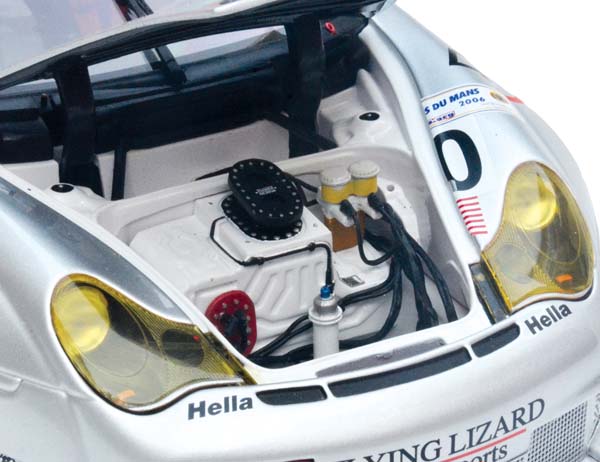 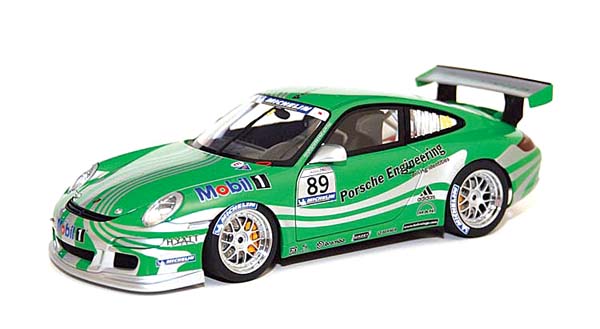 First Image: Flying Lizard is one of the truly successful teams racing the GT3 in the ALMS GT2 class. The racer is beautifully executed in scale by AUTOart. Second Image: Opening the hood on AUTOart’s 997 Flying Lizard GT3 reveals the center-mounted fuel tank and some ancillary equipment. Third Image: This 997 GT3 ran in the 2006 Porsche Michelin Supercup series, supporting the FIA Formula One World Championship. This VIP car, sponsored by Porsche Engineering, was loaned to celebrities and dignitaries to compete in the races.

The GT3 is a historically important car … it’s available in 1:18 scale at just about every price point 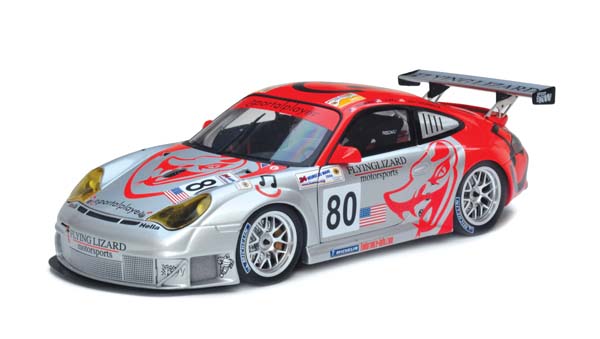 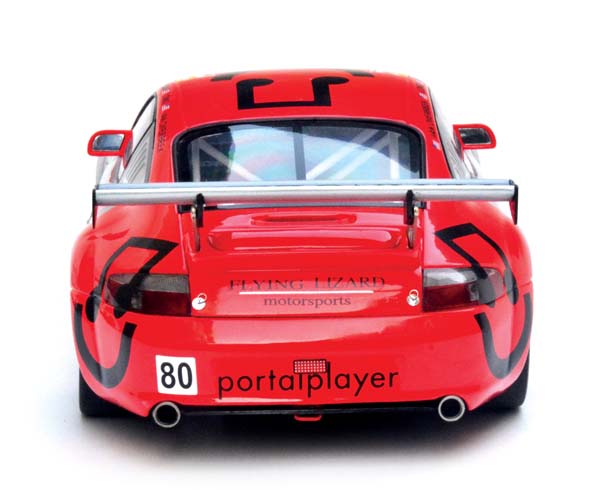 PMA/Minichamps also makes liveried and non-liveried versions of the Porsche 996 GT3 RSR, and one of the nicest is a model of the wildly decorated “Flying Lizard” racer. Everywhere you look, the car is meticulously crafted and decorated—and, tellingly, so are the non-liveried versions, which are polished and perfect, wearing rich, mile-deep paint on castings with pin-straight shut lines and seams. Overall, the cars’ bodies are view. On the PMA/Minichamps cars, beautifully represented. these are all bundled and incredibly So are the cabins: in these comp realistic, especially the eye-grabbing machines, a mass of exposed wires and plastic and stainless-sheathed cable cables that would normally be hidden running from the upright shifter back t underneath the carpeting come into the constant-mesh transmission. Under the bonnet is t the fuel cell and all of its associated plumbing; the h are also brake and clutch e r r master cylinders, hoses f e e f r r the brakes, and air lines f the front pneumatic jack. They’re a little heavier than the AUTOart versions, too— and overall, these models are about as good as it gets. 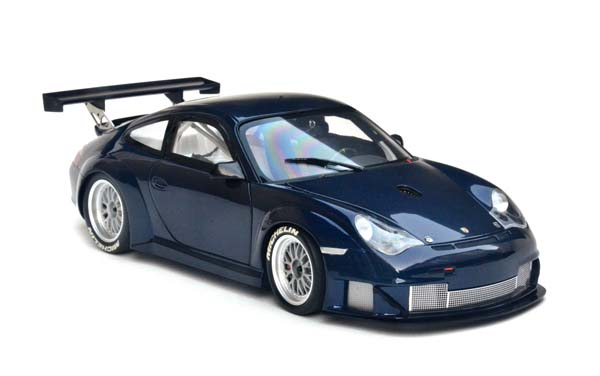 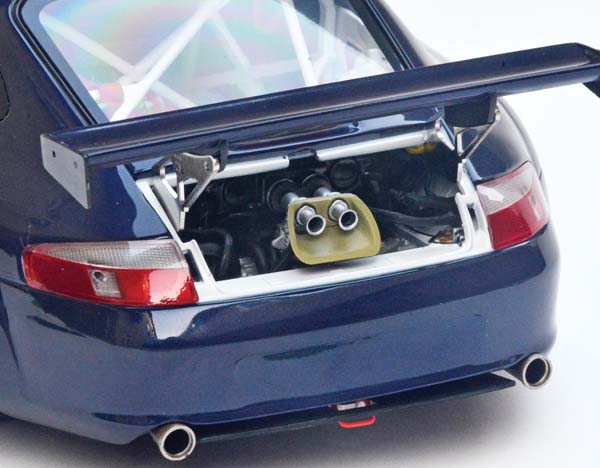 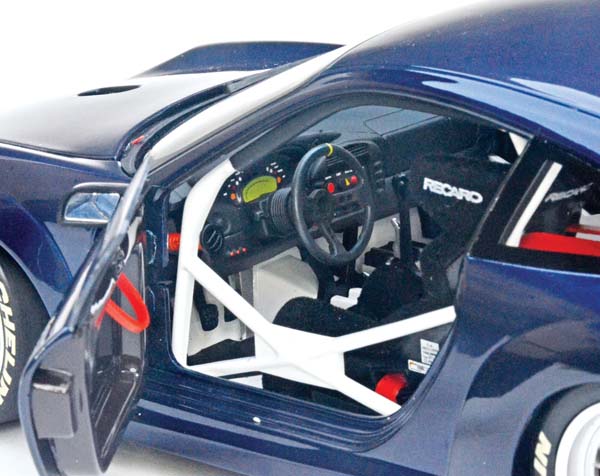 First Image: This non-liveried Minichamps 996 is absolutely breathtaking, with “mile deep” blue metallic paint. Second Image: Not much to see here–but that’s just how the real thing looks; the engine is covered with carbon fiber and alloy shrouds, leaving only the air intakes and some plumbing to be seen. Third Image: Opening the driver’s door on the Minichamps 996 exposes loads of wonderful detail in the stripped-to-the-bones interior. 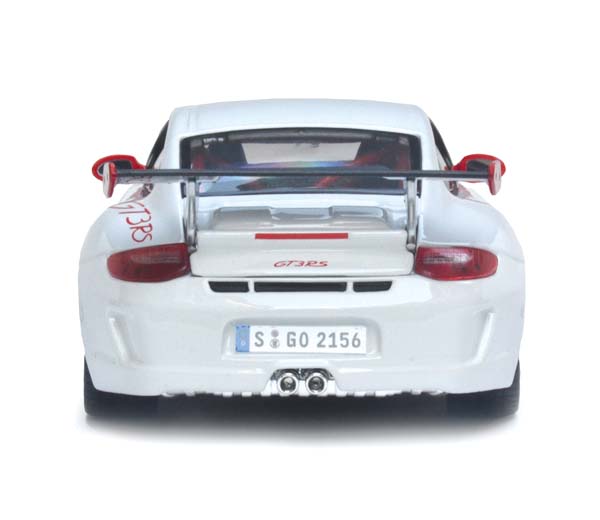 Above: Bburago makes a nice version of the GT3 for those young collectors or those not demanding the highest levels of detail. An excellent value for the price.

As a reasonably priced alternative, Bburago’s GT3 RS does a nice job of capturing the essence of the GT3. The smooth white paint, accented by the bright red wheels, graphics, rear view mirrors, grille “lipstick” and wing end-plates makes for an attractive combination. It’s a durable finish, as well, but the downside is the paint’s thickness, which obscures some of the details of the door handles and body seams.

This is a road car with a roll bar, and it has a full-boat interior with racing bucket seats. The doors hinge inside the fenders— a nice touch—but the areas under the bonnet and boot are plastic “plate” castings, and they have a negative impact on detail. Still, price considered, this mass-market-targeted piece is a very nice model, particularly for sharing with the untrained hands of non-collectors … or as an entry car for a new, younger collector.

Keep an eye out, and an open mind, and you’ll come away happy. The GT3 is a historically important car—and thanks to the efforts of the above manufacturers, it’s available in 1:18 scale at just about every price point, and in several collectible liveries. So, no matter what your price range, there’s one for you, whether you’re a hardcore collector who demands the finest in detail—or you just want to play Santa to a new collector. Now, that’s a race worth running.