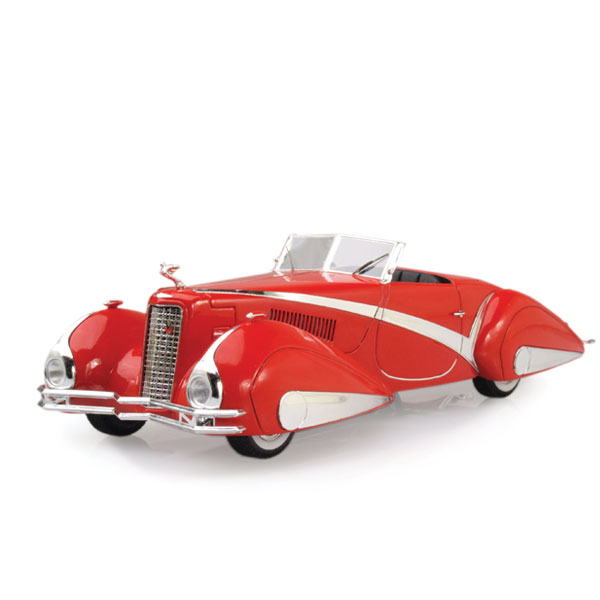 Wealthy Swiss playboy Philippe Barraud’s friends drove custom-bodied Bugattis, Delahayes, and other exotics; he wanted something just as sexy but much more imposing. He discovered a massive 154-inch wheelbase V-16 at a Lauserne Cadillac dealership, ordered a bare chassis, and had a local coachbuilder, Hartmann, design and build a two-seat cabriolet to his specifications that was even longer than a Bugatti Royale. Originally painted off-white with swoopy orange fender and body accents, the car was re-painted and restored several times before finding its way back to the USA where the current restoration gave it bright red paint with the accents covered in chrome, a disappearing top, and a recessed egg-crate grille. TMC has modeled this final version from the Blackhawk Museum and plenty of photos show they haven’t missed a thing. The big (6.07”), crisply detailed resin body’s lines are just right and its red paint and chromed metal accents are literally perfect. Every detail, from the red V-16 badge and winged emblem to the stalk-mounted taillights, is there in perfect scale.  The cockpit has plush upholstery, separate plated handles and shifter, and an authentic black dash with aluminum instrument panel; all seven gauges have detailed faces.  What a bargain!  — Wayne Moyer