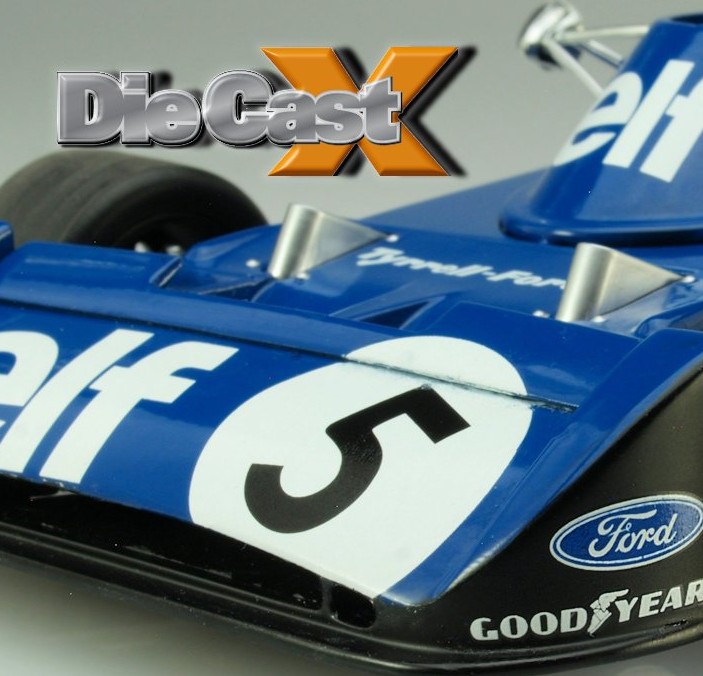 TSM Models’ Tyrrell 006 racer is a tight little replica of Jackie Stewart’s final F1 ride; a sealed-body marvel that pays homage to a great driver – and the sport he walked away from when he parked the car for the last time.

The Tyrrell 006 first got raced in late 1972 at the Canadian Grand Prix. Stewart clicked with the car, and won his third Driver’s Championship in 1973, besting a stable of talented pilots, including his teammate, the movie-star-handsome, supremely talented Francois Cevert. The Ford Cosworth DFV engine, Hewland five speed, and ZF differential  were a perfect match of power and gearing for Stewart and his Tyrrell cohorts, scoring five wins, three poles, and two fastest lap laurels in 18 races.

This is a great looking model of the car as it appeared when Stewart won the Belgian GP in 1973. It was a tough race even before it started; after walking the circuit at Zolder scarcely a week before the contest, Stewart, Emerson Fittipaldi, and Francois Cevert all found the track in terrible condition, with chunks of its surface loose enough to cause a hazard. So, they put their collective foot down: fix the track, or we won’t show up.  The course got resurfaced in time for the race.

It’s a testament to the trio that they won that day; Stewart was first, Cevert second, and Fittipaldi third, in a Lotus-Ford. It would be Stewart’s only Belgian GP victory, and one of his last races. On October 6, 1973, Cevert, Stewart’s friend, protégé, and heir apparent to the Elf Team leadership, crashed and died at Watkins Glen in his Tyrrell during qualifying for the U.S. Grand Prix. In a touching moment, Stewart – who could be seen prior to the race discussing with Francois how to maneuver through the very spot where he later crashed – drove his Tyrrell to the scene, trying to determine what could have gone wrong. He retired from Formula 1 racing that day, having already taken his third Driver’s Championship.

TSM has done a bang-up job on the model. Not only is the car properly proportioned and perfectly cast, it’s also painted beautifully, and decorated with tampos of outstanding clarity and quality. Even where the white markings are faced against the dark blue, the images are sharp, glossy, and opaque. The scuffed tires, complete (and mostly visible) engine and exhaust detailing, complex (but static) suspension bits and the beautifully braced rear wing offer up a ton of detail, despite the lack of a single working feature, save for free-wheeling axles.

It’s always fun to compare a replica to archival footage of its full-sized inspiration in the hands of a master, especially when it’s a car as twitchy and light on its feet as this one was. Watching Stewart bomb through corners on the ragged edge of control had us looking between our monitors and the tabletop, again and again, and celebrating not only the model’s accuracy, but “The Flying Scot” himself for the treasure he is. That elevated TSM’s Tyrrell from display piece to something of a touchstone. Highly recommended.