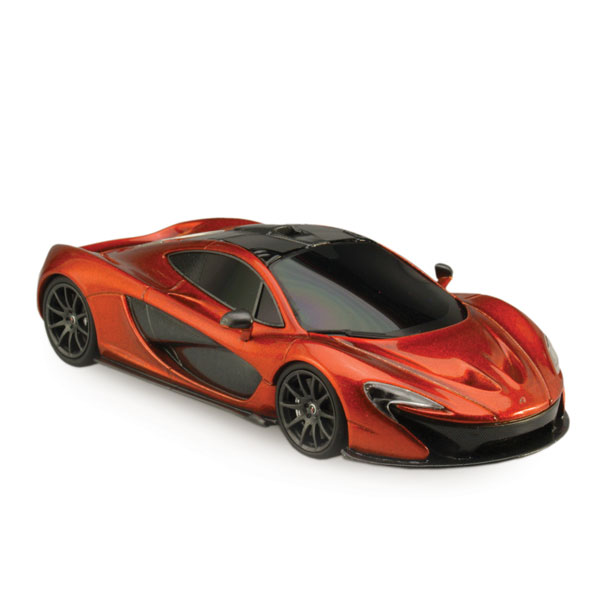 TSM’s McLaren P1 is covered by the deepest, most fiery metallic finish we’ve ever seen on a 1:43 model… and as if that wasn’t enough, the stuff smells great. No, really: this is the scent of top-quality paint, and it took us right back to our building days. If you were lucky enough to be at the Paris Motor Show in 2012, then the model will take you back, too, to the McLaren display where the 1,000-horsepower plug-in hybrid supercar was revealed to an excited (read that: drooling) crowd. The TSM resincast miniature has all of the P1’s dramatic angles and sweep, not to mention all of its eye-grabbing eccentricities. The anthracite-toned wheels are here, in front of brake discs and McLaren calipers; so is the McLaren logo-shaped lensing, exquisitely thin-cast air diffuser at the rear, and the carbon-fiber inserts all around. It takes a great eye to render something this small and retain the correct stance, shape, and presence — which TSM has, from every aspect. If after all that effort, the paint seems a tad too flashy to be scale correct, it is, but for the best possible reason: it’s the same finish that was used on the concept — with the same sized metalflake as the full-sized car. That’s a beautiful thing. This is well worth sniffing out. — Joe Kelly, Jr.