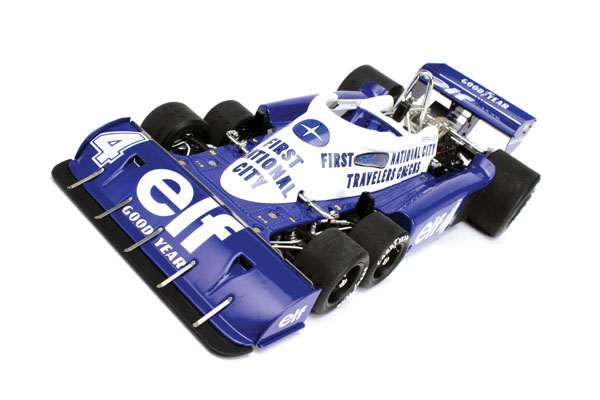 One look at the legendary Tyrrell 6-wheeled P34 and you know that it’s one of the most groundbreaking and distinctive race cars in Formula 1 history. Ken Tyrrell was a fearless innovator and engineer, and the idea of using four small wheels in front in place of the conventional large two was driven by sound engineering principles—reduced aerodynamic drag, reduced rolling resistance, and increased grip. Patrick Depailler piloted the car at the 1977 Monaco Grand Prix, where it qualified a respectable 8th and showed flashes of speed, but the mechanical gremlins that plagued the car all season (mainly unrelated to the unusual wheel arrangement) reared up again in Monaco, forcing the car to retire with gearbox failure. We’ve been impressed with TSM’s recent releases of historic F1 models (check out the review of Senna’s McLaren in the Winter 2015 issue) and this Tyrrell looks to continue that trend. It’s a fascinating engineering exercise, a great conversation piece, and a distinctive piece of racing history. And with just 300 pieces slated to be produced, it should be quite collectible as well.