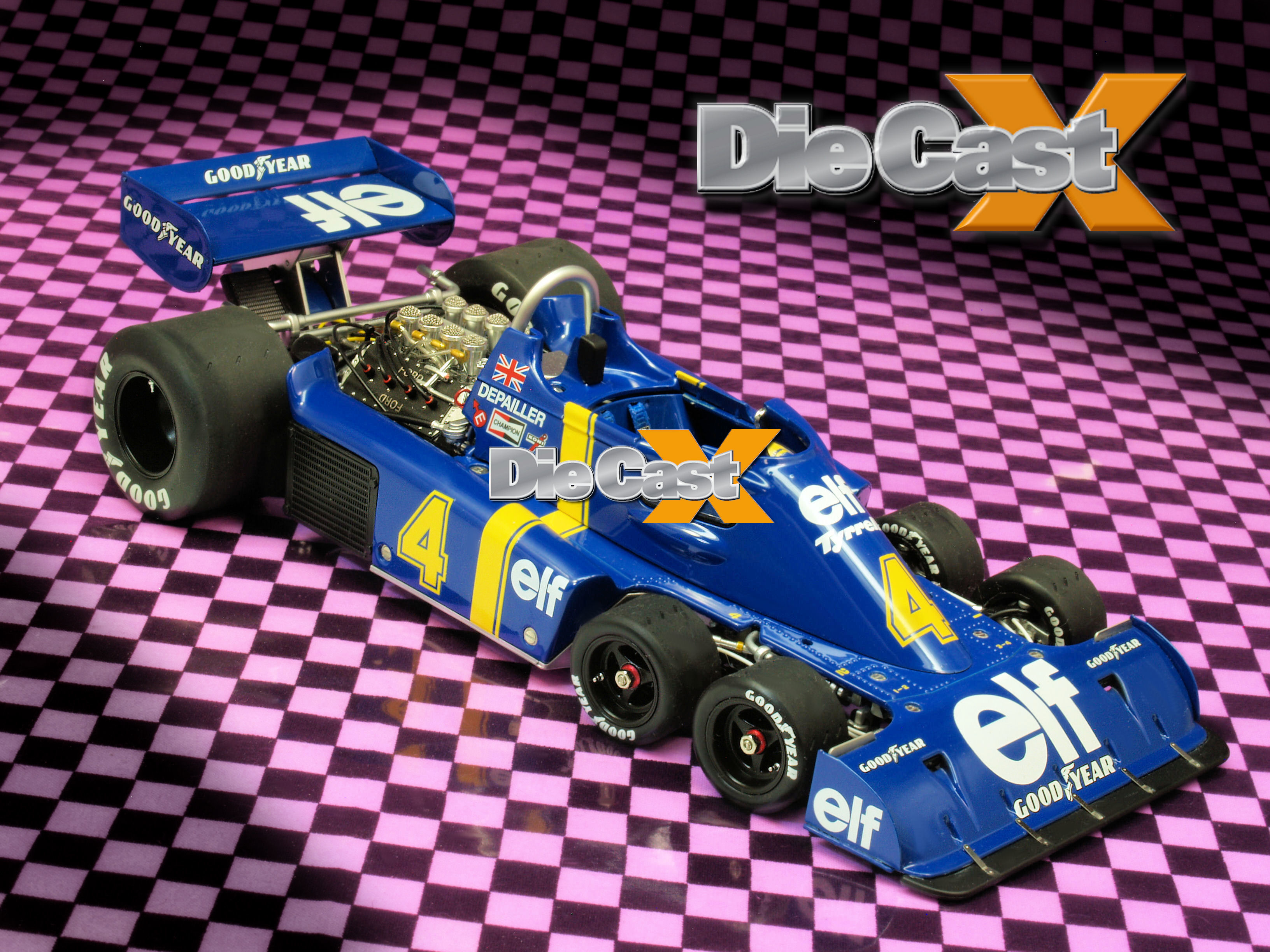 Oh, to be odd. To flip convention off like a bad pair of shoes. To break through the walls of normalcy with a loud crash… okay, scratch that last one. Crashing isn’t what most race car designers and engineers are aiming for, per se. But sometimes, it takes a trip far afield to cheat physics, sidestep logic, and defy the odds by being… odd.

To that end, there appears on the scene the occasional left-of-center racing machine. In 1976, the machine was the six-wheeled, chisel-faced Tyrrell P34, and the designer of note was a fellow named Derek Gardner. Derek’s idea was simple: buck aerodynamic drag by making the frontal area of the car as low as possible.

In and of itself, that wasn’t an original thought; designers had been doing it for years. But when faced with the same stumbling block that every F1 architect had been forced to reckon with – the height of the front wheels and tires – Gardner (and team owner Ken Tyrrell) did a little chin stroking, took a long, lingering look at the rule book, and then did something historic, original, and elegantly, wonderfully unconventional: he made the front wheels smaller.

Despite introducing a whole new level of problems (not the least of which would be finding tires), the car was a visual, if not performance, sensation when it debuted at the Spanish GP in 1976. Jody Scheckter (DNF: blown motor) and Patrick Depailler (ditto: crash) were the pilots, the latter driver heaping praise on the machine, and the former, not so much. Though he wasn’t a fan of the techno-gizmo four-wheel steering, Scheckter did manage to bring the car in first at the Swedish GP later that year, with Depailler coming in second.

With the machine at constant odds with tire development, brake cooling, and with the clock ticking on a growing dislike for the edgy design on the part of the ruling bodies, it was the only outright win for the P34. By 1978, the Tyrrell was off the track, but in the books as one of the most recognizable and original designs in auto racing history.

There must be miles and miles of smiles at TrueScale Miniatures these days. The company started with re-realized mold sets sourced from another manufacturer a while back (resulting in an excellent series of Porsche 935s), and now they’re seeing an even greater level of success. And though this 500 piece limited run set – representing the cars as they appeared in their finest hour, at the Swedish GP, 1976 – has been sold out for a while, it’s one that you might want to check into on the secondary market.

The subject matter is top shelf, and the fact that this was TSM’s very first in-house tool makes the cars all the more impressive, and likely to appreciate over time. Even the way the cars are packaged is engaging; like a lot of high-enders, these arrive semi-assembled. Now, don’t get nervous. The heavy lifting’s already been done. All you need do is attach the two rear wheels and the rear wing, an activity that will give you a chance to get intimate with some of the detail that’s on tap.

Once properly put up, the cars are real eye grabbers in this tampo-based, painted-on “Elf” livery. The larger body castings are slick and well fitted, their finishes further enhanced by added-on photo-etched braces for the front lip and a lightweight, (folded metal?) rear foil. More etched steel makes up the radiator and oil cooler faces; heavier gauge, flat stock metal replicates the struts for the wing, and makes for a deep, multi-media visual in hand. The Goodyear tires are scuffed, the decos are sharp, and taken as a whole, the cars come across as quality items.

In this case, multi-media also means multi-piece, and there’s a lot of small stuff to take in, like the ovoid windows at the cockpit sides that allowed drivers to keep an eye on the front tires and suspension. On the track, these small units were a constant cause for concern. As for me, I couldn’t keep my eyes off those little rollers, or the series of rods, struts and joints that TSM’s hung them on. I’m no geometry whiz, but watching the multi-axle, multi-plane set up at work is a real kick, made all the more impressive by the flexible brake cooling hoses that come along for the ride. More remarkable: When placed in the straight-ahead position, the wheels all line up perfectly. Figuring all of those angles, pivots, and arcs had to be a challenging task in real life – but in scale? Wow. Bravo, guys.

That’s not to say that the car’s jammed with exotica. It’s true, there’s a fair amount of steel and etched hardware on tap, but TrueScale keeps the price on these cars to an acceptable level by using a good amount of styrene. Fear not – it’s high-grade, crisply-cast stuff that’s been painted, textured, or metallized. That really shows at the rear, where the stressed member, 485-horse Ford-Cosworth DFV V8 and Hewland 5-speed trans have been slung from plastic that’s been so well decorated and assembled it had me doing double takes. In addition to the wiring and detailing, the race motors have been fitted with steel screens in their stacks, clear fuel lines, and braided steel hoses. Look closer, and you can read the “Lockheed” on the inboard-mounted calipers (my pre-production samples said “Lookheed”, as do the production pieces I’ve seen). Turn the car over, and the dry sump oil pan, ZF differential, and neat, multi-link (static) suspension are complex and detailed assemblies in multiple metal finishes. Pull a wheel – any of the six on the car – and there are steel faced discs and full brake detailing.

Pick the canopy off and there’s a creditable cockpit on display, with a neat steering knuckle below a piped and wired tube brace for the wheel and gauges. The seat itself is a sling with fabric belts and plastic and photo etched buckles; look closer for the hot-pressed “Willans” decos on the straps. It seems these fellows want to wow you with clever ideas and bang for the buck.  Not a bad thing, from where I sit.

Even the way TSM is marketed the models was slick, in the best possible way. Scheckter’s number 3 car (also sold out) was available as a separate piece, but if you’d wanted to park it next to the number 4 driven by Pat Depailler, you had to buy the two as a set. The good news was that the pair came at a substantial discount – and that made these models all the more remarkable.

It’s not a secret that tooling and manufacturing costs, or a single financial misstep, can sink a company for good these days. On the other hand, the price point for some high-end models makes them all but unattainable. But this crew seems to have a knack for representing much-desired, impeccably-detailed racing machinery at a price that allows the average collector a chance at ownership. This would seem to indicate a high level of thoughtfulness and planning on TrueScale’s part;  a full, 360 degree approach to not only the development of the models themselves, but to how they get presented and ultimately delivered to a savvy collecting base hungry for solid value and high standards.