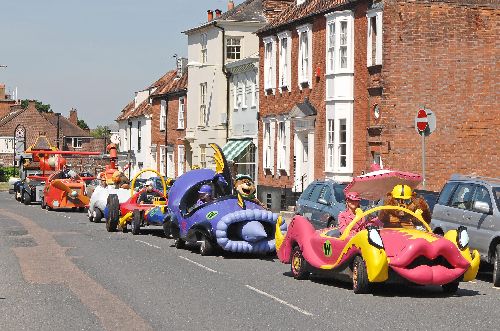 Just when you think you’ve seen everything, along come those crazy Brits. The annual Goodwood Festival of Speed is one of the premier vintage racing events on either side of the Atlantic. Like similar events in Monterey, California, and Watkins Glen, New York, the event features the most significant racing cars in history along with a preview of what the future has to offer. The coordinators of the Goodwood event, however, pushed the envelope a bit further, with activities and attractions that appeal to the next generation of motorsports fans. For 2009, full-size, real-life and functioning versions of the Hanna-Barbera Wacky Racers made their global debut.

British custom creator Modeltech constructed 10 full-scale Wacky Racer replicas for the June 22-24 event. What heretofore could only be seen in the States on Cartoon Network or Boomerang came to life to the delight of kids of all ages. The 10 re-created racers were Penelope Pitstops Compact Pussycat, Peter Perfects Turbo Terrific, Dastardly and Muttleys Mean Machine, Professor Pat Pendings Convert-A-Car, the Creepy Coupe, the Boulder Mobile, the Army Surplus Special, the Crimson Haybaler, the Arkansas Chugabug and the Buzzwagon driven by Rufus Ruffcut and Sawtooth. Missing in action (possibly waiting to be paroled) was the Ant Hill Mobs Bulletproof Bomb.