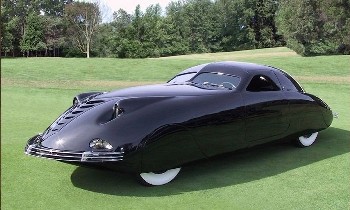 Those 57 Varieties must have been running pretty well when Rusty Heinz contracted Maurice Schwartz (of Bohman & Schwartz coach builders) to help design and build a special car, atop an already special machine. Thus the dashing coachwork of the Phantom Corsair, of which only one would ever be made, was built onto a Cord 810 chassis. With front wheel drive and 4.7 liter V8 power, the Cord frame and drive train were a match made in heaven for the incredible Heinz/Schwartz design, which eschewed fenders and running boards, and did away with frilly external ornamentation in favor of a streamlined, extremely low (for the time) profile and skirted wheel wells.

Heinz spent $24,000 on the prototype car – enough scratch for a couple of plush homes in 1938 – and intended to sell more at around $12,500.00 a copy. Unfortunately, Rusty Heinz died before production could be set up, and all that remained of the man’s dream was that original car.

Automodello will be fielding a 1:24 resin-bodied replica of the Corsair this December, and if it’s up to the par of the recent 1:43 this company’s been rolling out (and we’ve no reason to believe it won’t be), it’s going to be a stunner. Like most of Automodello’s chosen subjects, it’s a rare bird – and an even rarer subject in scale. Look for a tidy casting, as evidenced by these factory pre-production images, done in the deep, hand-rubbed paint finish that this maker is becoming known for.

Expect the model to be extremely limited in its production, as well – only 299 will be made.