Bill Bennett
From the Magazine 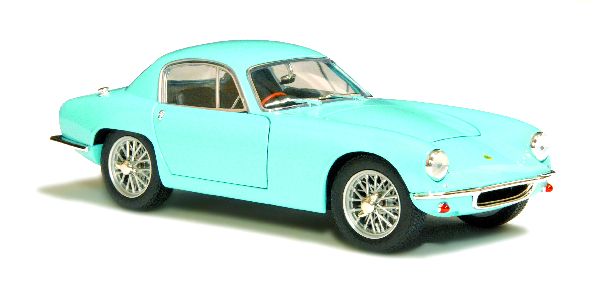 During the 1960s and ’70s, Lotus was the most successful name in Formula 1 racing and won seven Constructor’s Championships and six Drivers’ Championships with Jim Clark, Graham Hill, Jochen Rindt, Emerson Fittipaldi and Mario Andretti. Lotus even picked up a 1965 Indy 500 win in the process. But just as important as these achievements were the other 100-plus unique open-wheel, sports racing and sports car designs they built in their 59-year history.

Engineer Colin Chapman founded Lotus in 1952. The company name was taken from the nickname “Lotus Blossom” he had given to his fiancée. Innovative engineering played a key role in Lotus’s success, and many concepts it developed in the ’60s and ’70s remain in active use by racers and car manufacturers. The use of the engine and transmission as “stressed chassis members” in race cars, the use of composites, the first monocoque Formula 1 chassis, new aerodynamic and ground effects concepts in racing cars as well as many other suspension and chassis concepts can all be credited to Chapman and the Lotus engineers. But Chapman was also a pragmatist and had no misgivings about borrowing good ideas from anywhere else he could find them. For example, his early use of wings came directly from Jim Hall’s Chaparrals.

Lotus was responsible for developing the Lotus-Ford Twin Cam engine, a four-cylinder block with a cross-flow DOHC head. Chapman and Lotus have often been compared to Ferrari (the man and his cars), Chapman’s chief rival in his Formula 1 “glory years.” But their biggest difference was how they accomplished their goals: Ferrari through power; Lotus through finesse.

Lotus cars were always built with one eye on the scale. There was a feeling among some of his drivers that Chapman was so weight-conscious that he designed his cars to cross the finish line in first place and then fall apart. There is no question that his phobia about poundage created cars that were incredibly nimble, quick and fuel efficient if not a little bit fragile and dangerous. This phobia also carried over into his street cars that, even after several changes in Lotus’s ownership, retain a reputation for agility and economy due to their light weight.

For Lotus lovers, there are many 1:18-scale choices. Manufacturers as diverse as Anson, AUTOart, Carousel1, Exoto, Kyosho, Minichamps, Quartzo, Revell, Spark, Sun Star, True Scale Miniatures and Yat Ming produce a broad range of subject matter, quality and cost. This look at some of the 1:18-scale models is a representative collection of Lotus street cars (race cars will follow in a subsequent issue).

A surprisingly great model considering the bargain pricing, the Elite was Lotus’s first purpose-built street car. Built out of fiberglass, the car was light, agile and a little underpowered in its stock form. Its monocoque fiberglass shell was fragile and expensive to repair. But it was a real joy to drive and garnered a committed following. The Elite was successfully raced at Le Mans and the Nürburgring, winning its class six times at Le Mans and also gaining two “Index of Thermal Efficiency” wins. Recommended and a real bargain. 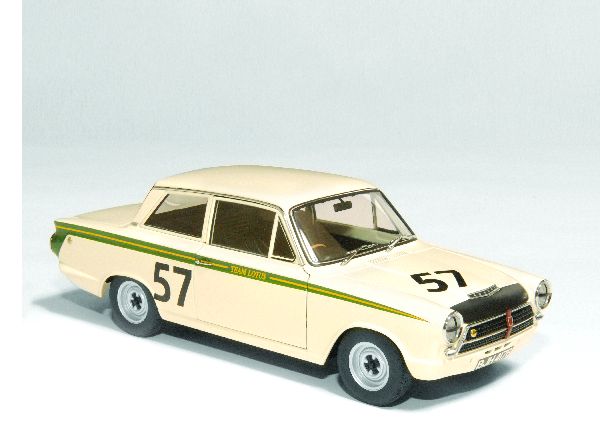 1964 Lotus Cortina Mk I by AUTOart
One of the first factory tuner cars, Lotus started with a Ford Cortina coupe fitted with aluminum bonnet, boot and doors. Lotus fitted the shell with a DOHC, dual Weber carbureted engine and completed significant suspension modifications and added Girling front disc brakes to create a competent club racer. Jim Clark raced a modified Lotus Cortina extensively and was quite successful. AUTOart’s rendition is nicely done in both showroom and liveried as Clark’s #57 racer.

1965 Lotus Elan S/E Coupe
by AUTOart
Introduced initially as a roadster in 1962 and a coupe in 1966, the fiberglass Elan replaced the Elite and was less fragile and easier to build. Utilizing a steel subframe to mount the drivetrain and suspension components, the Elan was more durable and didn’t have the de-lamination problem found with the Elites. Equipped with a 1558cc dual-cam engine based on the Ford four-cylinder block and a Lotus-developed aluminum head, four-wheel independent suspension and disc brakes, the little lightweight (1,500 lb.) had a top speed of over 120mph and was beautifully composed on the twisties. A quarter century later, Mazda’s Miata MX-5 would find much inspiration from the Elan.
AUTOart has created a beautiful model of this car with pop-up headlights, carpeting and the dual-Weber Lotus-Ford engine. Built to the high standards of AUTOart, their Elan will make a nice addition to your collection.

1973 Lotus Europa Twin Cam Special JPS by Kyosho
The ’73 Lotus Europa Twin Cam in black and gold pays homage to the John Player Special cars that were raced in Formula 1 by Lotus with drivers such as Fittipaldi, Andretti and Senna. Initially equipped with a Renault engine and transaxle, the Twin Cam Special replaced the Renault powerplant with a Lotus-Ford Twin Cam engine but retained the Renault transaxle. Sporting a fiberglass body attached to a steel backbone, the car was light (1,570 lb.) and nimble from the get-go. 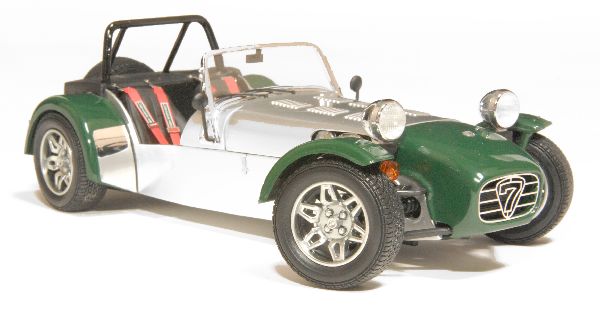 1974 Caterham Super Seven w/cycle fenders
by Kyosho
The Caterham Super Seven is a direct descendant of the Series 3 version of Lotus Seven. The Lotus Seven was first introduced in 1957 as a kit for either the owner or a professional builder to complete. The Seven embodied Colin Chapman’s philosophy of simplicity and low weight. Although not practical as daily transportation, most Sevens were used as Club Racers or weekend drivers. Lotus produced over 2,500 of the Sevens between 1957 and 1972. When Lotus ceased production of the Seven, one dealer, Caterham Cars, purchased the rights to continue production of the Seven. Kyosho makes a number of versions of this iconic car. This car features an aluminum and green-painted fiberglass body and cycle fenders, a DOHC Cosworth-Ford with dual Webers and K&N air filters and four-wheel independent suspension and disc brakes. This is a little gem, and if you were going to only have one Lotus street car in your collection, this would be a good choice.

1976 Lotus Esprit S1 by AUTOart
Built to replace the Europa, the Esprit’s fiberglass body was designed by Giorgetto Giugiaro in his sharp-edged, wedge style as introduced at the 1975 Paris Auto Show. Using a slightly stretched version of the Europa’s wishbone chassis, it featured a longitudinally mounted Lotus 907 2.0 liter, 4-cylinder engine producing 160hp in European trim. Once again, “performance through light weight” was the goal in this design. It was equipped with four-wheel disc brakes and independent four-wheel suspension. AUTOart makes two versions of this model: street and the in-water submarine from the James Bond movie The Spy Who Loved Me. This is a nice little car and necessary to complete a definitive Lotus collection.

1996 Lotus Esprit V-8
by AUTOart
In 1987 and again in 1993, the Esprit went through design changes that changed the exterior and interior from its original Giugiaro design. Lines were softened and aerodynamic elements added. In ’96, a twin-turbocharged V-8 was offered. The 918 engine had been rated by Lotus at 500hp, but because of the Renault transaxle’s limitations, the engine was de-tuned to 350hp. The car would go 0-60mph in 4.4 seconds and had a top speed beyond 175mph. AUTOart’s model is just plain stunning. With Guards Red paint and Camel interior, it is close to perfection. The engine compartment is somewhat understated with only the valve covers and intake horns visible. The rest of the area under the engine cover serves as a luggage compartment and is flocked to represent carpeting. Under the bonnet is a spare and assorted mechanicals. The glazing and rubber gaskets are perfect, and the detailing and expertly rendered shut lines make the car come alive. This is one of the nicest street cars in this collection. 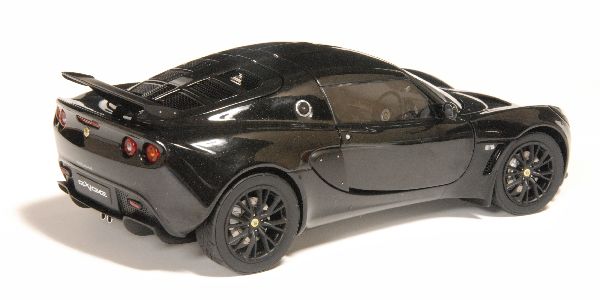 1999 Lotus Elise Mk I Type 49
by Sun Star
The Elise was introduced in September 1996. Designed by Julian Thomson, head of Lotus design, and Richard Rackham, Lotus’s chief engineer, the car was composed of a hand-laid fiberglass body attached to an extruded aluminum full-length chassis that carried the engine, transaxle and suspension. The car was fitted with an 118hp, 1.8L Rover K-Series 14 engine and 5-speed manual transmission. With the car tipping the scales at about 1,600 pounds, the Elise can do 0-60mph in a respectable 5.8 seconds. Limited editions have also been released that bump the horsepower up to 190. Two homage cars were created to celebrate Lotus’s relationship with Gold Leaf and John Player Special, the former in red, white and gold livery, the latter in black and gold.
The Sun Star car is painted in the red, white and gold colors of Graham Hill’s Lotus 49B that he raced in Formula 1. Sun Star has created a really nice little car considering its bargain price. With a Spartan interior and a detail packed engine bay, this model represents the real car well.

2000 Lotus Exige by AUTOart
This coupe was a derivative of the Elise. Introduced in 2000, it came with the same Rover K Series engine producing 177hp in street tune and 192hp in “Track Spec.” Further engine development has been done with the fitting of a DOHC Toyota/Yamaha engine and horsepower topping 240hp. AUTOart’s triple-black Exige is elegant in a stealthy, understated way. The Spartan interior is nicely captured and features alloy foot wells and shifter pedestal. The instruments and accessories are realistically portrayed, and the exterior details are extraordinary as we’ve come to expect from AUTOart. The brakes are rotating cross-drilled rotors with pass-through calipers. AUTOart’s portfolio of finishes is breathtaking and allows them to simulate fabric, paint, metal, vinyl and rubber in ways that few manufacturers can.

There is some very impressive quality in the models in this collection. From the Yat Ming and Sun Star to AUTOart and Kyosho, there’s not a disappointment in the bunch. The bargain cars obviously have fewer details, but they still do a nice job of capturing the subject matter. Kyosho has done an excellent job of bringing us the Caterham Super Seven and the Europa. As for AUTOart, they never cease to amaze us with the beautiful exteriors, the quality of the detail work capturing the layers of material and the ability to render all the finishes.