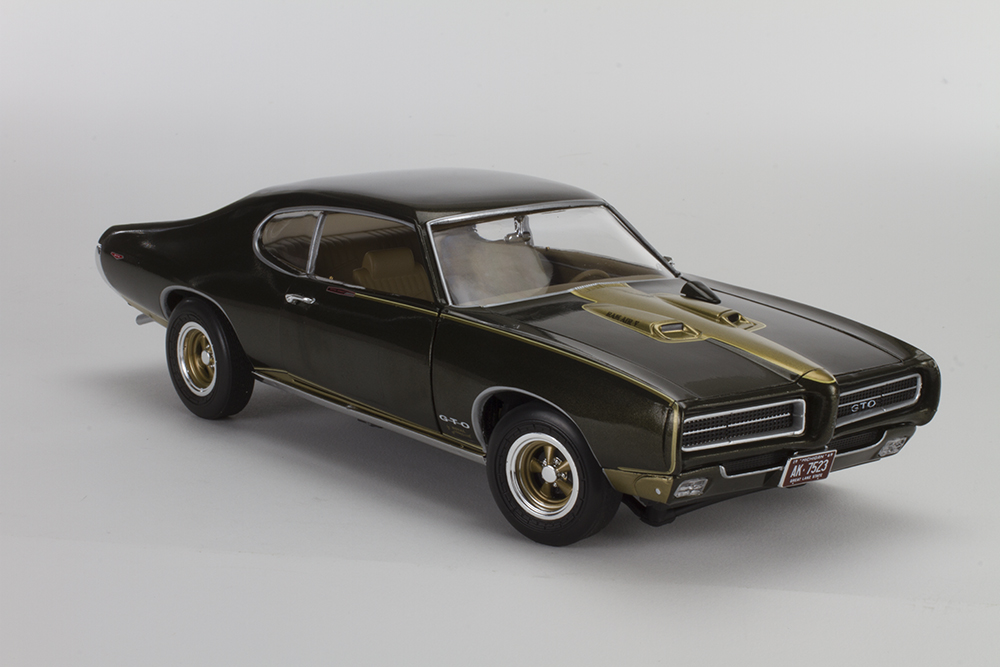 For enthusiasts in the 1960s Royal Pontiac was indeed the regal palace of Poncho performance. Tapped as the official factory-supported skunkworks by new Pontiac general manager Semon “Bunkie” Knudsen and marketing maven Jim Wangers (of GTO fame) in 1959 to help build the brand into a performance leader, Royal-campaigned Super Duty Pontiacs were soon winning races on drag strips from coast to coast. When GM withdrew official factory support from racing in 1963, Royal expanded its operation to fill the void, offering dealer-modified performance models as well as mail-order do-it-yourself kits, under the tutelage of Performance Manager Milt Schornack. 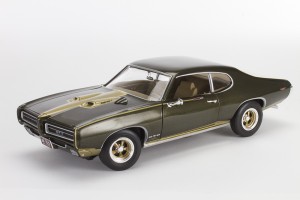 Royal was, among other things, responsible for building the legendary 1964 GTO sleeper (complete with a secret 421 big block!) that Car and Driver used in its famous Pontiac GTO vs Ferrari GTO “comparison test.” In later years Royal was best known for its “Royal Bobcat” package. This was a hop-up kit for Pontiac engines (usually in GTOs) which consisted of rocker arm locking nuts, thinner gaskets with higher compression and blocked heat risers, a re-jetted carb, a distributor re-curve kit with Mallory points and condenser. When installed at Royal, the Bobcat package also included a full balancing and blueprinting of the engine, and various decals, stripes and badges. The cosmetic changes served as a warning to would-be stoplight warriors; the Bobcat package added 30-40 horsepower!

Royal held court over the kingdom of Pontiac performance until late 1969, when corporate bureaucracy and mounting resistance to the type of performance upgrades that Royal specialized in became too burdensome. Royal’s owner Ace Wilson Jr. sold the dealership and the reign of Royal came to an end—but not before unveiling one final, crowning achievement: The 1969 Royal Bobcat GTO Ram Air V!

Royal had been instrumental in the development of the mythical Ram Air V—an engine so radical that it, like its sibling Chevrolet’s LS7 or Buick’s Stage II, was never installed in a vehicle from the factory. The Ram Air V was available only as a crate motor—or, four motors to be more precise. The package could be ordered in four different displacements: 303ci (for Trans Am road-racing), 366ci (for NASCAR), 400ci (for street use), or 428ci (for drag racing), although to be honest even the 400 stretched the limits of what could be considered ‘streetable’. The key elements of the package were unique tunnel port cylinder heads with cavernous oval ports, gigantic valves, and high-compression combustion chambers. To them were added a radical solid lifter camshaft, and a reinforced block and bottom end with four-bolt mains to handle the 7000rpm speeds that the big cam and heads were built for. If that wasn’t enough, when you ordered a Ram Air V GTO from Royal you could get the Bobcat treatment added to it! 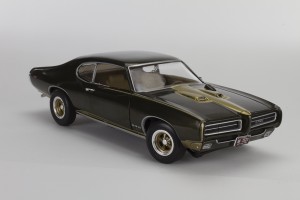 This one-of-a-kind Espresso Brown with Hurst Gold Ram Air V Royal Bobcat GTO is yet more special. It was built by Schornack’s team as part test mule and part marketing tool to showcase the potential of the Ram Air V crate engine. The car makes the rounds to car shows to this day, and can be recognized not just by its unique paint scheme, but also by the vintage Michigan license plates reading “AK 7523”—both of which AutoWorld has recreated faithfully here in 1:18. Fit and finish is quite good, with smooth paint and clean edges on the trim stripes and decals, including the Royal Bobcat door badges. Only an oddly shaped side mirror and the painted on window surrounds reveal this model’s origins in the old American Muscle casting. 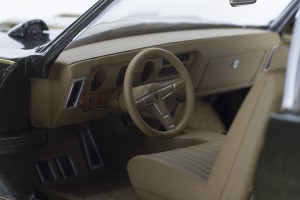 The interior of this model really shines—because it doesn’t shine! By which I mean that the use of flat beige paint on the dash and upholstery is a huge step up over traditional shiny hard plastic. This is probably the single biggest improvement to this casting over the old Ertl-spec version, and it makes a world of difference. Add to that the nice, fine-pile carpeting with driver’s side floor mat. There’s also a nice Hurst-style T-handle shifter for the console mounted 4-speed gear lever. 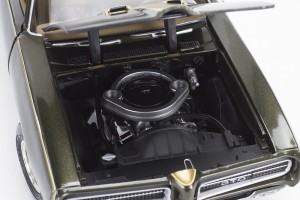 Lurking beneath the hood is the thing that sets this GTO apart from your run-of-the-mill Royal Bobcat (as if there could possibly be such a thing!): a Bobcatized Ram Air V! (Interestingly, although the car was originally built with a 400, but now carries an overbored 428. Externally, the two engines are visually indistinguishable, so this presents no problems.) The AutoWorld does a respectable if slightly inconsistent job of replicating the Ram Air V beast in 1:18. The engine is fully wired and plumbed, with flat metallic paint on the intake and exhaust manifolds nicely accenting the black block. Ram Air V cylinder heads are significantly different than traditional Pontiac heads; those giant ports necessitated equally spacing, rather than the siamesed ports of the lesser Pontiac heads. That means they have very distinctive exhaust manifolds. The model appears to have the correct spacing on the driver’s side manifold, but the passenger’s side has a stock, siamesed port manifold. The model does have the appropriate ducting on the underside of the hood to mate up to the elaborate Ram Air snorkel system surrounding the air cleaner, but I would have liked to see the signature foam gasket represented that seals to the hood duct.

Schornack chose Fenton Hustler wheels for his Bobcat, with the spokes pained Hurst Gold to match the body highlights. The real car currently wears staggered sizes—14×6 in front and 15×6.5 in the rear. The model comes with 14s all around, which is probably how the car was originally outfitted so it’s not a mistake. In any case, they look the part, with nicely painted spokes and blacked out centers. Tires are traditional American Muscle fare; no sidewall markings, but authentic contours and tread. 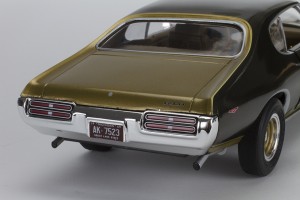 This model is very appealing on several levels; for its provenance, its rarity, and of course for its potent performance. As the test mule and show car for Ram Air V performance, it is a recognizable piece of Pontiac history, and the fact that the car still exists today—and appears publicly—adds to the appeal. AutoWorld has made significant—and welcome!—upgrades to the American Muscle ’69 GTO tooling, particularly in the interior. I would like to see a bit more attention paid to capturing the specific details of the Ram Air V engine itself, but that’s a small thing probably noticed only by engine geeks like me! At around $70, this model costs more than the old entry-level American Muscle GTO from years previous, but you get quite a bit more detail in the bargain.