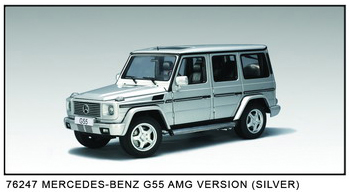 This boxy brute is Mercedes’ range-topping SUV — the G-Class. Like America’s original Hummer (H1), the G-Class — often referred to as G-Wagen (short for Geländewagen) — was developed first as a military vehicle and then adapted to civilian use. Durability and all-terrain prowess were among its highest design priorities when it first appeared in the late 1970’s, and for much of its life the G-Wagen came with three fully-locking differentials, a feature only the most hardcore off-roaders offer.

Gradually, the G-Wagen was phased out of military service and Mercedes began offering them with luxury appointments more in keeping with its civilian customer base. The G-Wagen’s cachet reached a whole new level with its 1990 redesign, and when an AMG-tuned version debuted it became the vehicle to own for the discriminating SUV’er.

AUTOart offers both the standard ’90s G-Wagen, and the ultra-chic G55 AMG.