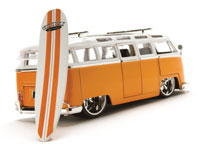 Did you ever think you’d live to see the day when a Volkswagen Bus would be considered an image car? This is the same vehicle even VW pitched with the slogan “It’s ugly, but it gets you there.” But in the 40-odd years it’s been chugging along, it’s earned a sort of geek-chic, and is much sought after by the beach set. Now, with a little “chop ‘n’ drop” treatment from Jada, these ’62 1:24 versions are downright smokin’. The white over orange Bus comes with safari windows, a surf board and low-and-wide 5-spoke wheels that make the originals look like bicycle tires. Primer paint and whitewalls with full moon caps give the gray Bus a rat rod look. Either way, it’s finally cool to be seen in a short bus!