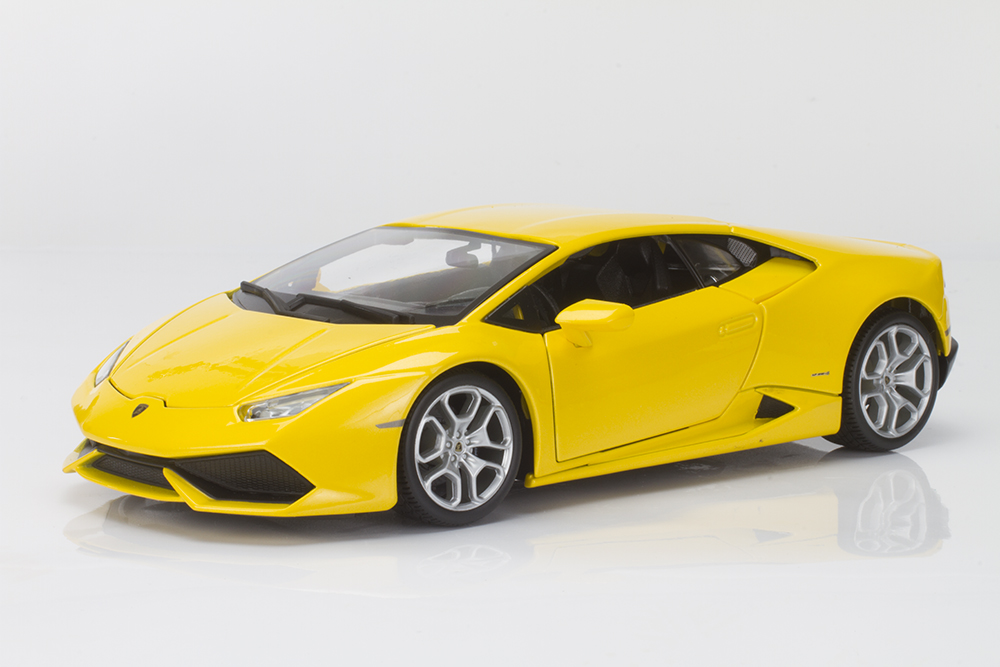 The survival of an exotic marque hinges on its…well… “exoticness.” Lamborghini, perhaps more than any other brand, has come to epitomize that elusive quality. Attention-grabbing extravagances like explosive engines and extroverted styling add mystique, which enhances desirability, which is the only way an exotic manufacturer can thrive. And while we’re all being dazzled by flagship models like the Aventador, Lamborghini has been quietly (well, as ‘quietly’ as Lambo gets) wheeling base models (well, as ‘base’ as Lambo gets) out the side door to throngs of eager buyers. The outgoing base model, the Gallardo, was in production from 2004 to 2014, and made that era the most successful in Lamborghini’s history. Nearly half of all the Lamborghinis produced have been Gallardos. Not just over this last decade—I’m talking ever! Of the 30,000 or so Lamborghinis ever built, 14,000 have been Gallardos! 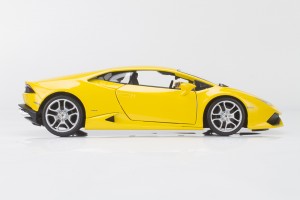 Obviously, replacing the best selling Lamborghini ever is serious business. And the result—the Huracán LP 610-4—is a serious machine. It’s packed with the company’s latest technology wrapped in eye-catching yet refined styling, and delivers uncharacteristic civility without taking away from the extreme performance which is essential to the a Lambo’s identity. It may well be the best all-around vehicle Lamborghini has ever produced. All the more reason then to snag a diecast replica of this legend in the making! 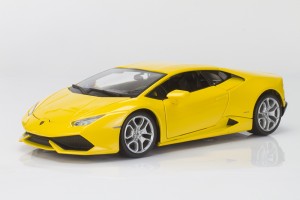 Bburago was the first to make it to market with a 1:18 Huracán. To my eye the Huracán has the look of a 7/8ths scale Murciélago—and that’s a good thing. Most importantly, it has more flowing, organic lines than the wedgy little doorstop Gallardo, and Bburago executes them well. The body is all metal, and the doors, boot and engine cover all open. There is one small burr in the right rear wheel well on the yellow car, but the green car is smoothly cast. The paint has just a touch of orange-peeling, but that’s forgivable at this price point. Multi-piece light inserts, sharply printed decals, and double 5-spoke wheels with attractive hexed-off spokes round out a striking exterior. 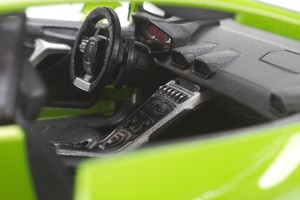 Narrow-throw door openings and black interior conspire to make interior detailing a challenge to photograph, but it’s there. Well-molded switchgear is highlighted with multicolor paint on the center stack, and a glossy decal replicates the LCD-screen instrument cluster. Tucked in behind the meaty steering wheel with its racing-style flat bottom are jumbo shifter paddles—denoting the presence of a modern dual-clutch automated manual gearbox, a giant leap forward for Lamborghini—literally!—as it helps the littlest Lambo rocket to 60mph in 3.2 seconds! The downside is that there is no traditional shift gate eye-candy, and there are only two pedals in the footwell—rendered in chromed plastic. 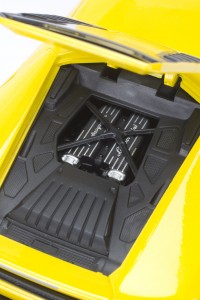 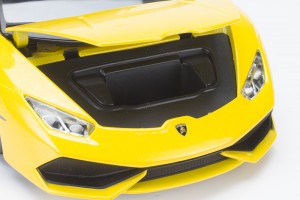 Don’t judge the Huracán’s engine by its cover—because it mostly is covered. Underneath all the camouflage is a 5.2L V10 that delivers 610 ponies through all four wheels. There’s a scale version of a fully molded engine and exhaust system buried in there, but you have to contort your eyeballs a bit to see them. 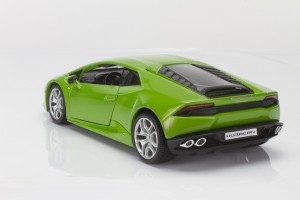 I’m pleased Bburago was able to produce a 1:18 Huracán this well this quickly—just as the buzz on the new baby Lambo is ramping up. And the pricepoint means enthusiasts at any level can afford to add one to their collections. Bburago’s fit and finish presents well, so this model looks at home among more expensive pieces, but could easily serve as the star in a fledgling collector’s display. Get one.—Matt Boyd