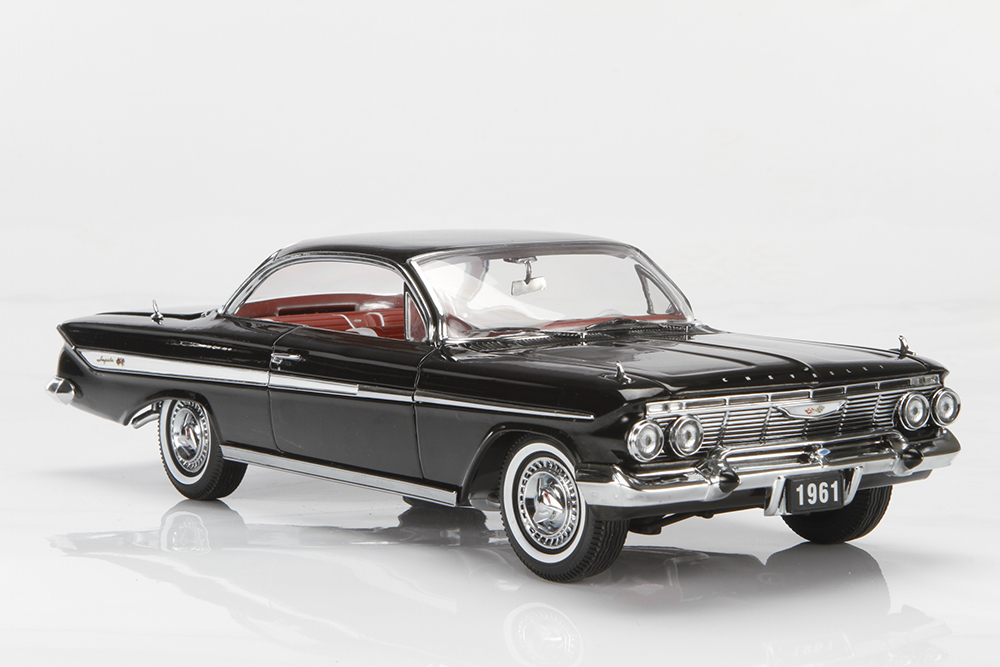 The most celebrated badge in Chevrolet Performance history—the legendary “SS”—started as anything but. Introduced with little fanfare late in 1961 as an option kit on the Impala sport coupe, the “Super Sport” package was overshadowed by the dramatic “Bubbleback” of the new-for-’61 body style.  The package itself was a tremendous bargain: it included power steering, a 7000rpm steering column-mounted tachometer, heavy-duty shocks and springs, power brakes with heavy-duty drum linings, a Corvette-style dashboard grab bar, special wheel covers and various “SS” emblems. All for $54! Also new was the “Turbo-Fire” 409—a big-inch, big power version of the 348ci W-series V8 that had powered Impalas since 1957. The 409 used a thicker wall casting to accommodate a bore increase from 4.125 to 4.3125 inches, along with an extra 0.25 inches of stroke, plus solid lifters and a high-lift cam, and a larger Carter 4-barrel carb. Output was a healthy 360hp, and a torque figure that matched the displacement—409 lb-ft! That was more than enough grunt to keep up with its Detroit rivals at the drag strip and on Main Street. The SS and the 409 were announced together late in the year, so production numbers were exceedingly low. They could be had separately, but were most desirable when optioned together; still only 142 of the 453 SS Impalas ordered in 1961 were 409s. The short-year availability was certainly a factor in the 409’s rarity, but so too was the fact that it could only be ordered with manual transmission (not until 1963 would a 409 be available with a Powerglide automatic.) 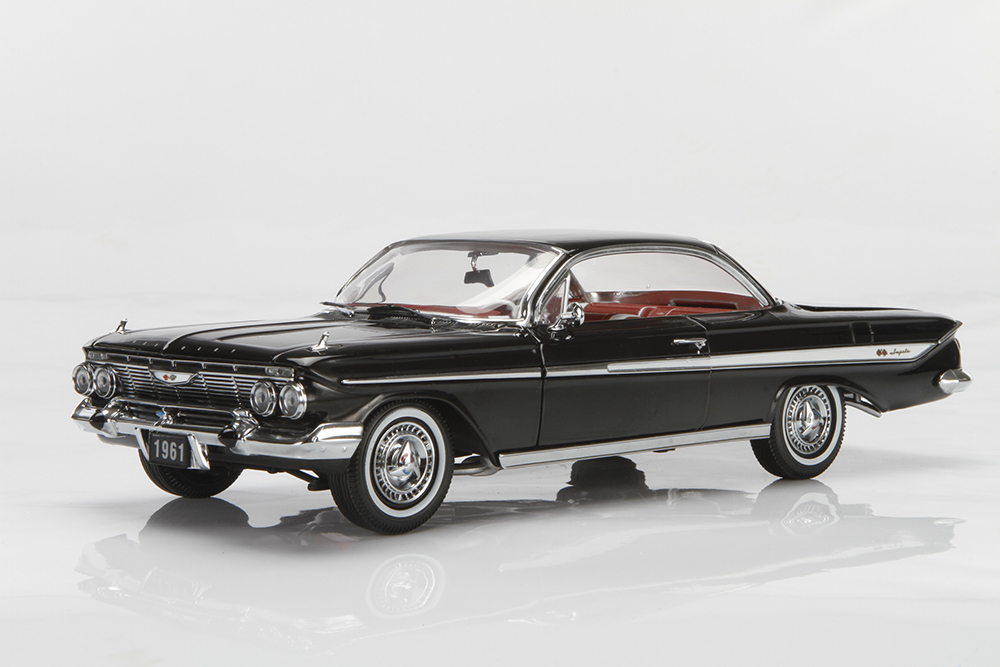 A 4-speed, bubbleback hardtop coupe SS 409 would have been most enthusiasts’ preferred configuration, although a few hardcore racers liked the 2-door post sedan for its marginally lighter weight. Sun Star has chosen the more stylish bubbleback decked in Tuxedo Black with a red interior as its latest depiction in 1:18. The casting has been used a number of times before, and the lines and gaps are good for the price point. The paint is also pretty good, although black is one of those colors that shows every speck and flaw, so there are a few. The signature bubble-top is cast separately to allow some of the same body castings to be used for the convertible version, but the seams are tight and straight so it is no drawback to presentation. The white side spears feature etched “Impala” scripts and SS logos, and there are etched badges on the grille and trunk lid as well. The Impala’s extensive brightwork is depicted mostly of cast metal parts, although the rocker moldings are chromed plastic and the driver’s side one doesn’t sit quite flush. 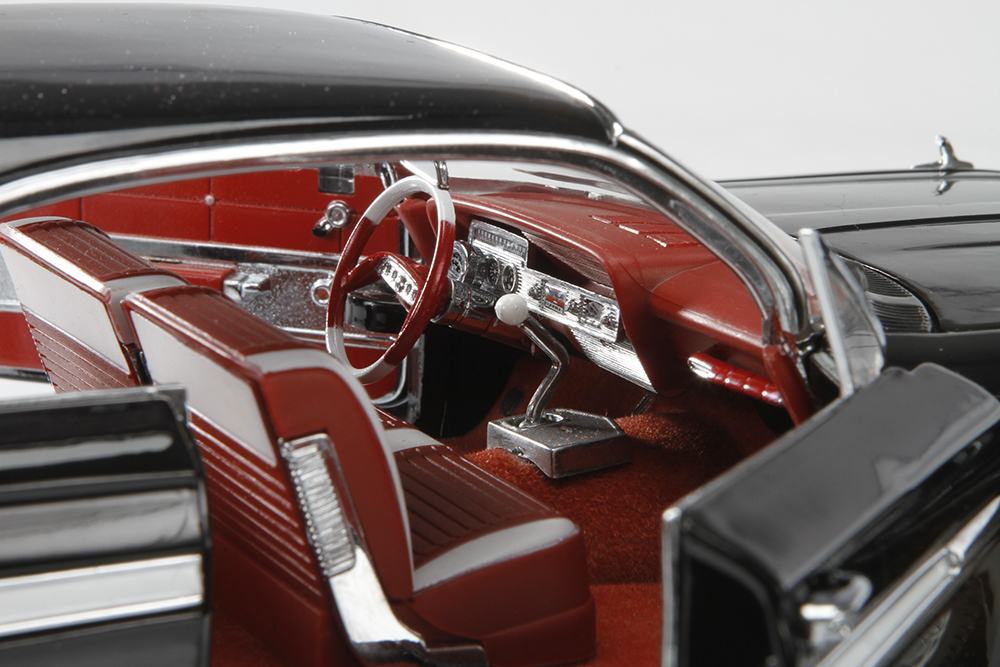 The red interior shows well, with white highlights and a fair bit of chrome. The seat surfaces are hard plastic, but the matte finish and offsetting colors give it a more upscale look. There is red flocking on the floorboards for carpeting, but no floor mats, and the flocking is sprayed over the surface-molded pedals. 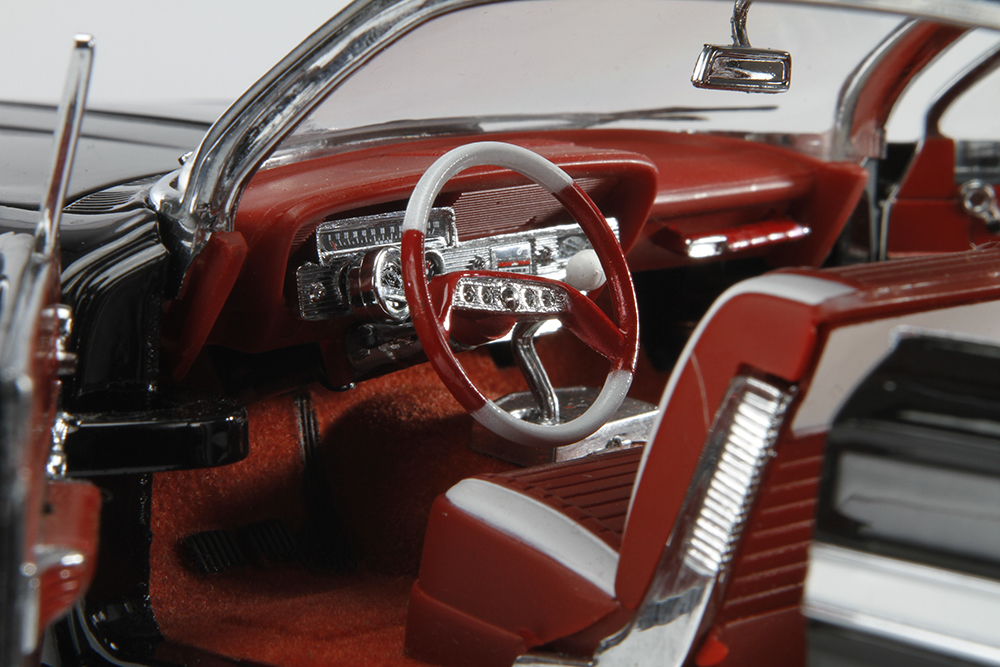 The instrument cluster is nice—a big sweeper speedo and a couple smaller gauges set into a textured chrome panel. The steering column has the SS-spec tach, and the wheel itself is has the deluxe two-tone color matching the rest of the interior. There is a console of sorts on the transmission tunnel in front of the bench seat; it has a vaguely home-plate shape and a texture similar to the dash. The sharply angled gear lever for the 4-speed juts up out of it. With the exception of the pedals the interior presentation is very satisfying. 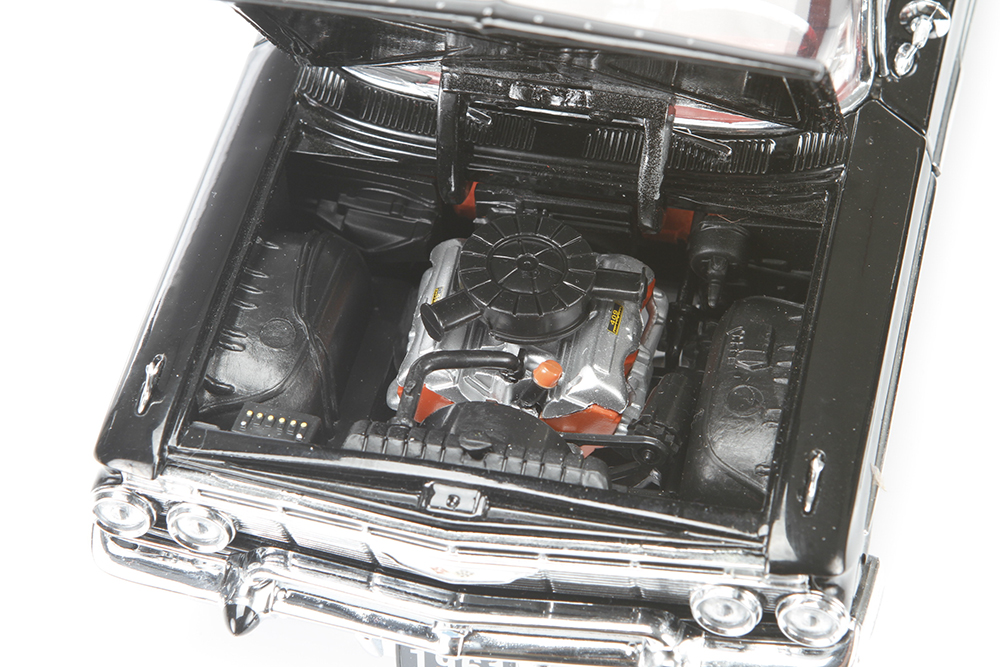 Being the impetus for a second Chevy legend, the engine bay is a place everyone will want to get a look at. The famed 409 was the inspiration for Beach Boys songs, stoplight heroics, and professional race victories in its 5 years of production. In its debut year it was available in just one configuration: with 11.25 compression, a solid-lifter cam and a big Carter 4-barrel. It churned out 360hp, but its big advantage was torque—it boasted nearly 50lb-ft advantage over the top-option 348 it superseded late in the model year. Since it was based on the 348 block, the 409 is physically small for a “big” block—and that is accurately reflected on the model. Also accurate is the matte silver finish on the W-shaped valve covers (chrome was not used on the 409 until 1963.) There are nice ‘409 Chevrolet’ decals on them as well. There are no plug wires, but the upper and lower radiator hoses are there, as are full exhaust manifolds that run to the dual pipes below. There’s a fair bit of surface detail on the firewall, but the all-black palette masks it somewhat. 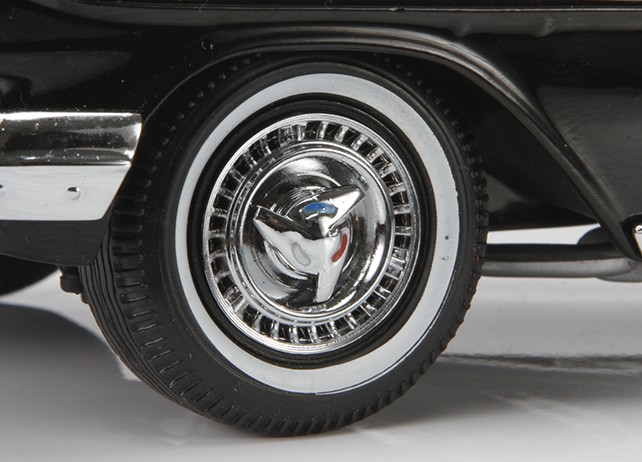 The styling was all-new for 1961 and sat on GM’s B-platform—using the ubiquitous X frame which it shared with several B-body Oldsmobiles, Pontiacs and Buicks. Sun Star does a convincing version with quite bit of detail molded into the chassis, although again unpainted black plastic makes that detail slightly harder to see. The dual exhaust follows the contours of the X-frame and is nicely painted. The special ‘SS’ wheel covers with their faux spinners are very nicely molded, and the chrome offsets the whitewall tires effectively.

Although it almost certainly wasn’t apparent at the time, the combination of the “bubbleback” roofline, the first appearance of the 409 engine and the introduction of the ‘SS’ package make the 1961 Impala arguably the most significant full-size Chevy ever. What was apparent even then was that the Impala SS 409 was a fast, stylish and modern coupe that gave Chevy a viable competitor against anything coming out of Detroit at the time. Sun Star recognizes the significance of the car and does it justice with its 1:18 rendition, combining nice detail with an affordable asking price. Tuxedo Black is always a good choice for a classic Chevy, and the Impala’s mix of style and story will be a strong addition to any collection. 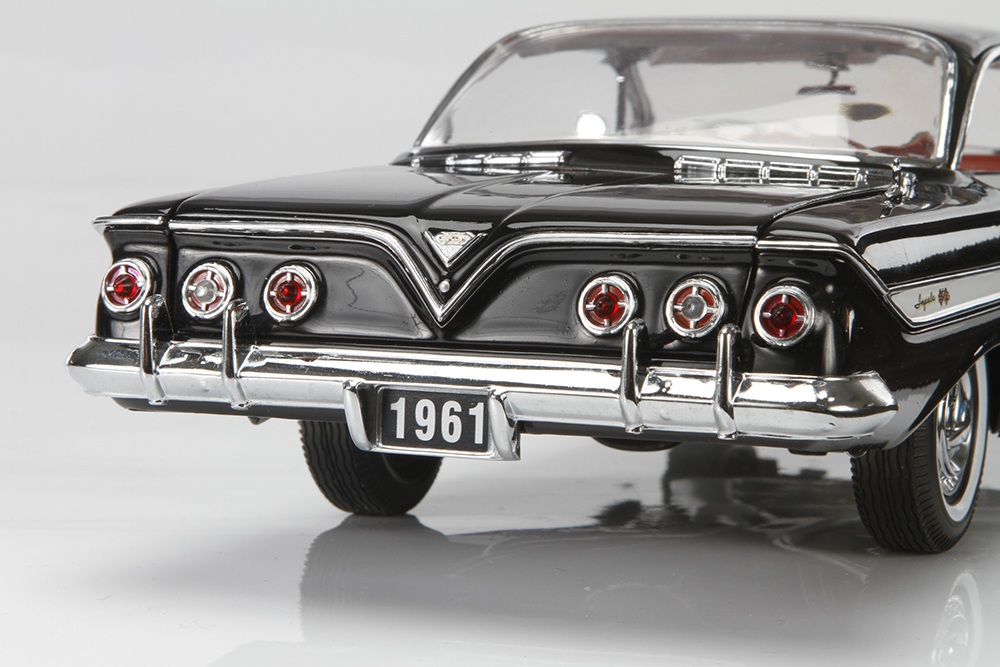