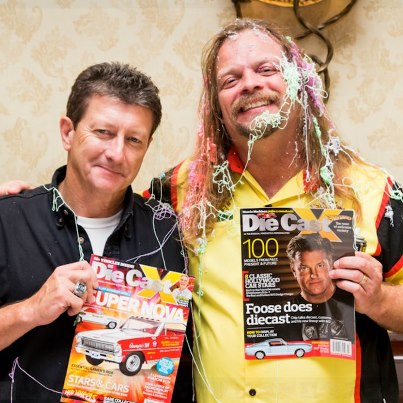 Hot Wheels Summer Smash 5 was a huge success. The Rhode Island Hot Wheels Club is an amazing group of collectors that work tirelessly to make sure every event they produce is held to the highest standards within the industry.

The minute you arrive at the venue, they make you feel right at home.  From Sizzler races, to interactive custom seminar – charity bingo to the charity downhill racing – there was something for everyone.

Charity is a large part of the Smash Conventions and the Rhode Island Hot Wheels Club conducts an auction, dinner and a downhill race competition to raise money for the “Children’s Wishes of Rhode Island” organization. This year, the winner (who asked to remain anonymous) of the downhill race event received $800 and donated it all back to the Charity!

Other collectors have that same giving heart too, like Jeffrey Stoller who for the past few years has been able, through his Masonic Lodge, to donate an additional $3,000. This year the Rhode Island Hot Wheels Club raised over $10,000 for the charity.

Some of this year’s celebrity guests included Johnny Jimenez from TV’s Pawn Stars and SciFi Channel Ghost Hunters, Jason Hawes and Steve Gonsalves who sat along with the diecast celebrities at the autograph sessions.

Some of the other events were the Celebrity Breakfast with Hot Wheels Designer Phil Reihlman, the RAOK Party sponsored by us (Die Cast X Magazine) and of course the “Liberty Treasure Quest” where people search the hotel for tiny scrolls to win limited edition diecast prizes.

There’s never a dull moment at Summer Smash as there’s always something to do along with the never ending room to room trading!  Thanks to everyone who attended and we look forward to seeing you all again next year at “Summer Smash 6” – Mike Zarnock

check out all the fun attendees had at Summer Smash 5

plenty of pictures to view at www.summersmashri.com