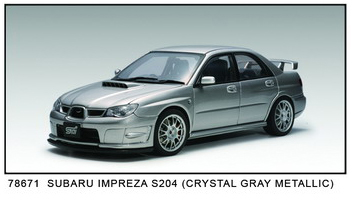 Codenamed the S204, this is Subaru’s attempt at a world-class sports sedan and they freely admit they had their sights on BMW’s M3, although the comparison with Audi’s RS4 might be more apt. Starting with the already formidable previous-generation STi, they tweaked virtually every dynamic element of the car (brakes, suspension and power) to produce the ultimate road-going Subaru. A twin-scroll, ball-bearing turbo with an optimized ECU, an enlarged intercooler and a special low-backpressure titanium exhaust system raises power of the Japan-spec 2.0L motor from 300 to 320hp. Channeled through a 6-speed manual, that power can push the car to 60mph in 4.4 seconds and nail the quartermile in the high 12’s.

But the S204’s forte isn’t drag-racing — it prefers when the road gets twisty. The supension sits 2/3-inch lower than the stock STi and the springs are 50% stiffer. The handling highlight, though, is the special dampers (developed in conjunction with Yamaha) mounted between the strut tower braces and the special lightweight BBS wheels wrapped in Pirelli P-Zero tires — these items combine to make this by far the most sure-footed Subie ever.

Other notable additions include giant Brembo brakes, special Recaro seats wrapped in leather, a high-efficiency rear wing, a front diffuser and subtle badges — all of which AUTOart appears to have included in its replica. This was the final incarnation of the outgoing Impreza body-style, and Subaru definitely held the best for last. Too bad it made only 600, and only for the Japanese and British (right-hand-drive) markets. But at least AUTOart gives you the chance to own one in scale.