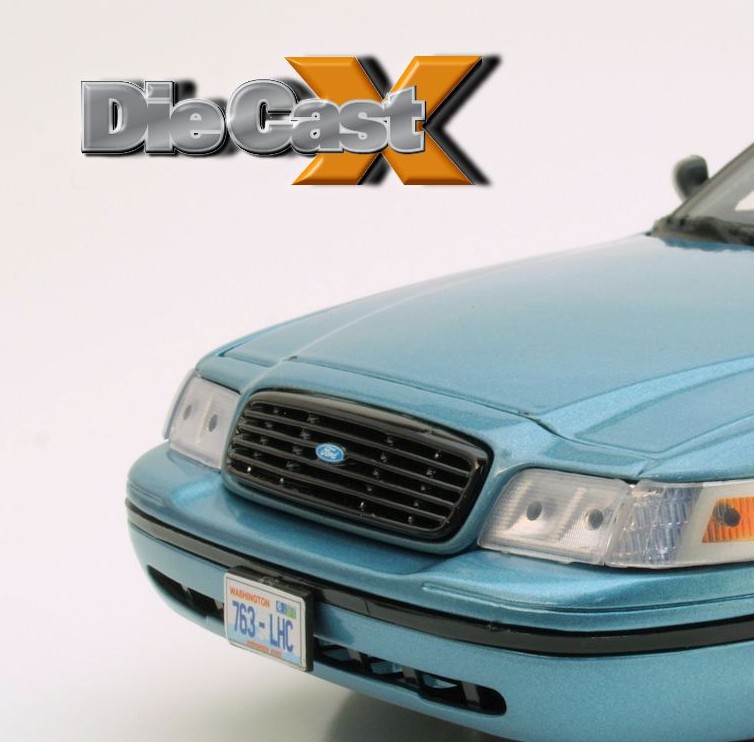 Okay, look – we haven’t seen any of the Twilight movies, and we wouldn’t know a single character from those fang-fests f they were standing next to us picking their teeth. But GreenLight Collectibles is keeping fans of the vampire classics happy.  This latest – a 2008 Ford Crown Victoria Police Interceptor cruiser, deco’d as the RMP that Chief of Police “Charlie Swan” drives – looks very much like the movie car it’s patterned after, from its decaled-on “Forks Police Department” stripes to the license plate number it’s wearing.  The model beneath the decos is decent, being a moderately well-detailed scale version of the ubiquitous Crown Vic; all four doors open, as do the trunk and hood (on dog-leg hinges), and though the black plastic that sits behind and beneath every opening is mostly undecorated (save for the gauge sticker on the dashboard), it’s sharply cast, and has a lot of detail – especially under the hood and on its chassis. Yes, the pegged-in lensing takes away from the image a bit, and the wheels are a bit whonky, but if you’re a fan of the flicks – or want to grab this budget-level CV for a little home-brewed tweaking of your own – those are hardly a cause for concern. Cop one.  – Joe Kelly, Jr.