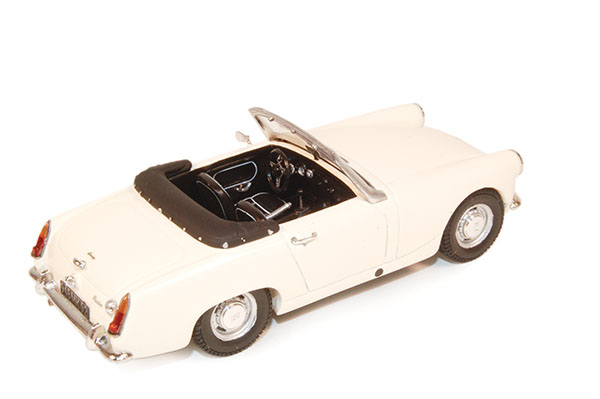 Although they’d sold almost 50,000 of the original Sprites in just three years, Austin Healey introduced the Mk. II in 1961. It had a much more modern-looking body with an “alligator” hood (instead of a forward tipping nose section) and a trunk that could be reached trough a lid instead of trough the passenger compartment. It did, however, lack the whimsical charm of its bug-eyed (frog-eyed if you’re British) predecessor. When its identical twin MG Midget appeared a year later the two became forever known as “Spridgets.” If it had full wheel covers, this resincast little jewel from Spark would be an exact match for the car seen on the cover of the August 1961 Road & Track. The glossy white paint is as good as anything in this scale and it’s fully detailed from the tiny 3D photo-etched Healey wings on the nose to the legible Austin and Sprite scripts on the deck. Interior detail is done to the same level; the black seats and door panels have exceptionally thin white piping while the latter have separate plated door pulls. Instruments are done with crisply printed decals. Wild About Wheels supplied this sample of Spark’s dead-accurate ’61 Sprite.  —Wayne Moyer