As many of you know, it’s car show season. It was kicked off for full-size cars in Detroit in late January, followed by Chicago in February. The biggest European show—Geneva—happening right now, and New York is in a couple weeks. But it’s just as big a show season for diecast, with the Nuremburg Toy Fair and the New York Toy Fair both taking place in February. We cherry-picked a few of the coolest products that were announced at each. Check them out and start making your shopping list for the rest of 2018!

We could do a whole issue on the stuff that American Excellence (and its European counterpart Model Car World) showed off in Nuremberg. Here are some of our favs: 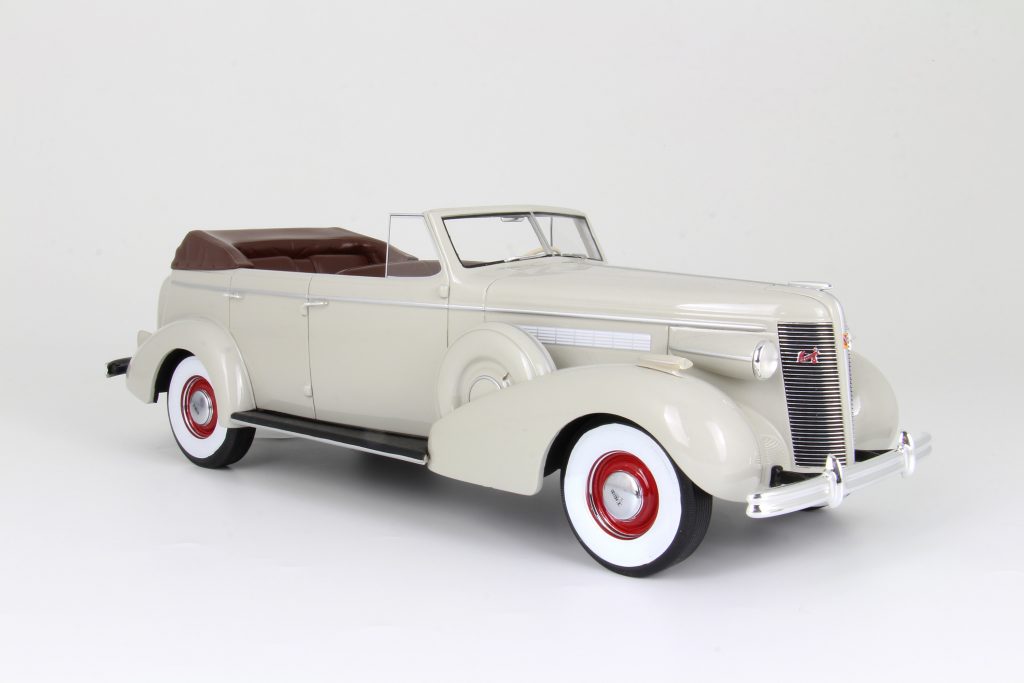 Best of Show has quite an extensive collection of pre-war American cars in 1:18. If you’re a Buick fan it doesn’t get much more appealing than a Roadmaster droptop. 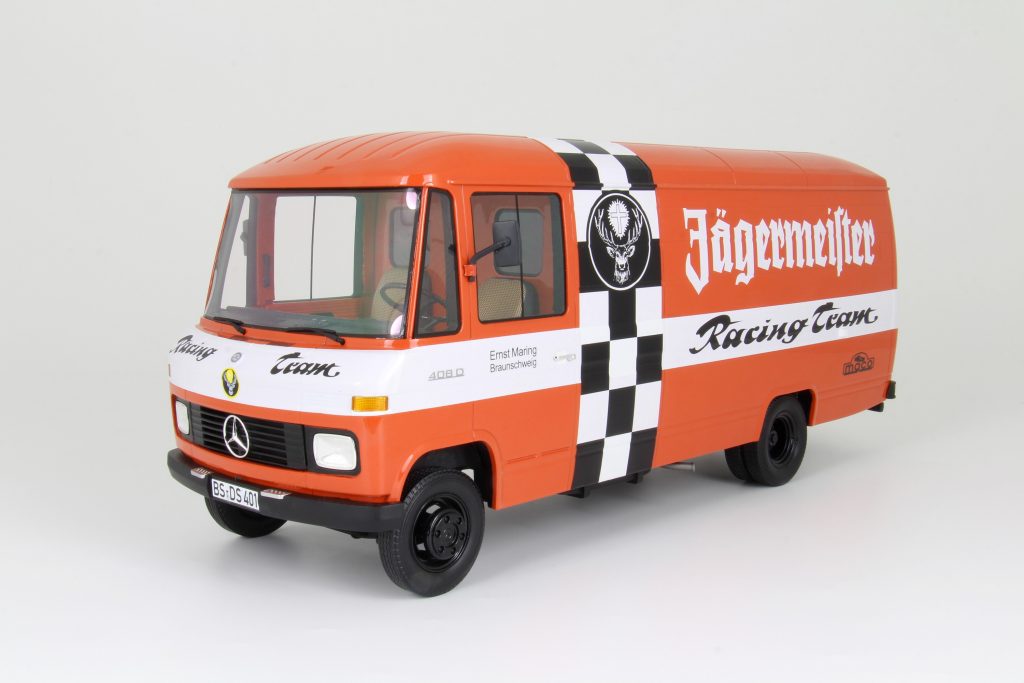 With its searing orange and checkerboard “Jägermeister” racing livery it’s hard to imagine a truck that grabs more attention, but if you have a Jäger-sponsored race car this is team hauler from Premium ClassiXXs a perfect match.

We saw some really cool military Jeep models coming from Auto World that we could not yet photo, but we did come away with shots of some of Johnny Lightning’s new Twin Packs while visiting their booth in New York.

They had one featuring the Barn Finds line with a pair of Plymouth Superbirds—one retro-street machine from the Muscle Car and Corvette Nationals, and one factory-fresh stock version.

GreenLight had a big booth in New York with a ton of new stuff on display.

The biggest news for us concerns their ongoing revival of the Highway 61 brand. They had a Plymouth Valiant Duster on display, as well as a bare metal prototype of a custom GMC G15 van from a certain ‘80s TV series, (We pity the fool that doesn’t recognize it!) 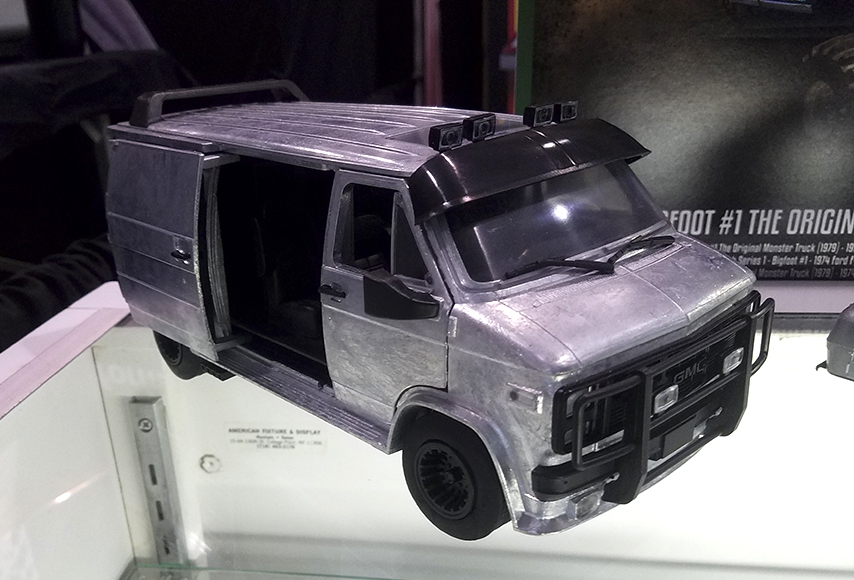 GL also teased a series of 1:64 and 1:43 Monster Trucks titled “Kings of Crunch” which will be kicked off by the original Bigfoot #1 ’79 Ford.

On the 1:18 front they showed a bare metal Bronco in vintage Baja trim and the Mad Max Pursuit Special. 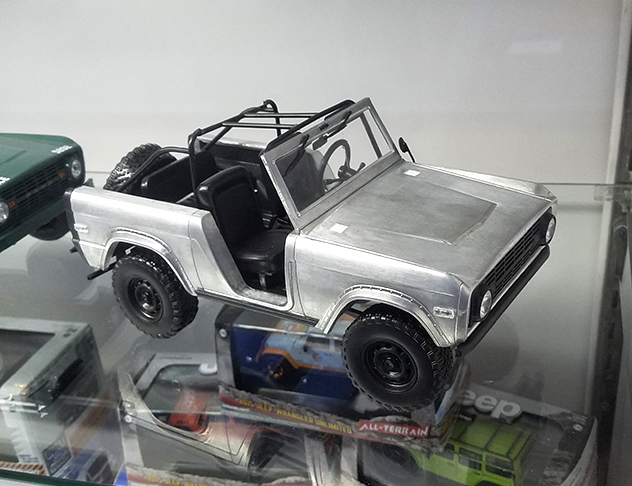 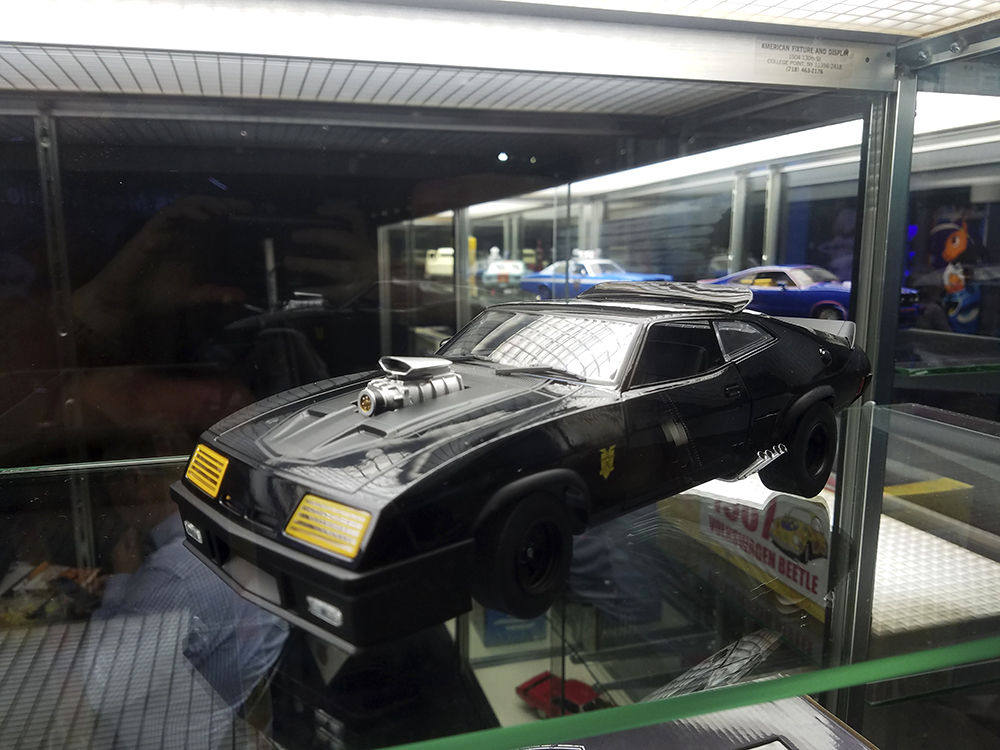 The guys at Maisto were showing off a few new items from their Maisto Design series. Two of our favorites were the ’69 Dodge Charger and the 1970 Datsun 240Z. They’re both based on standard 1:18 castings, but compared to the standard Charger this lime green Design version has Torq Thrust wheels, staggered Firestones, modern sport seats and a bunch of extra interior detail. 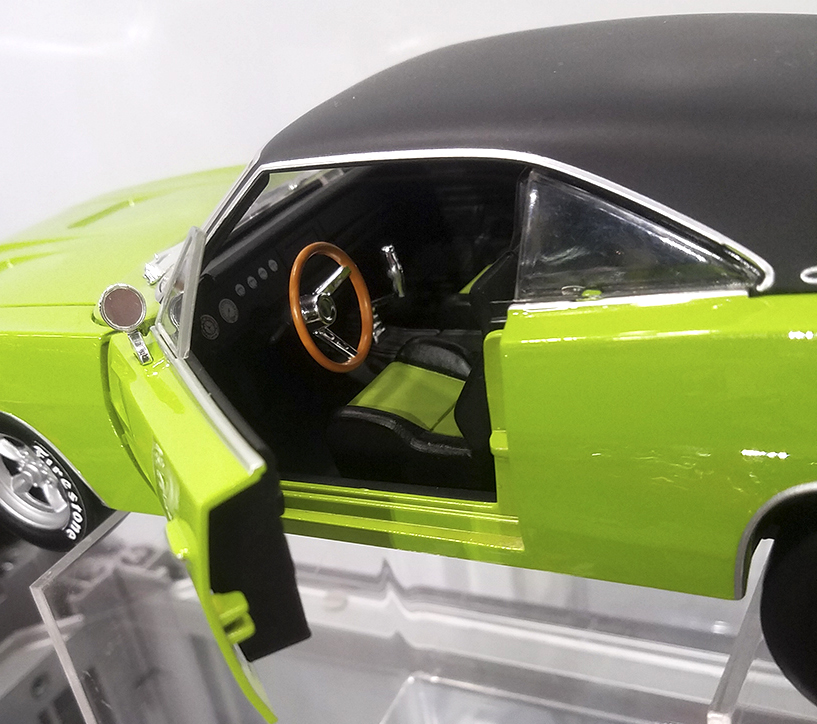 The Z got similar interior treatment, plus wide Panasport wheels and racing-style fender flares to clear the wider rubber. 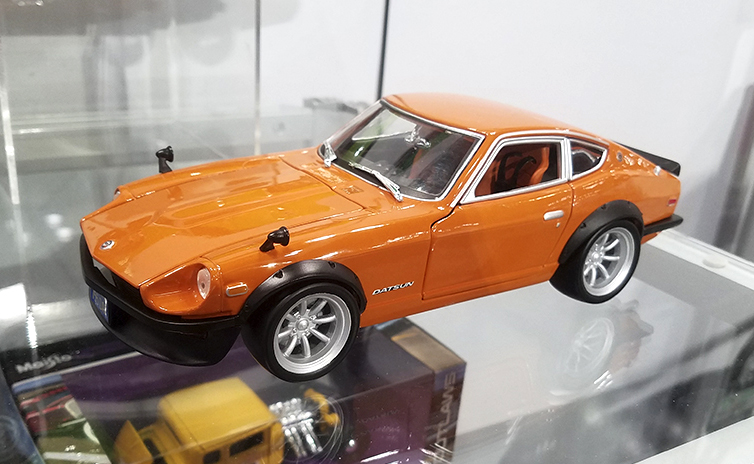 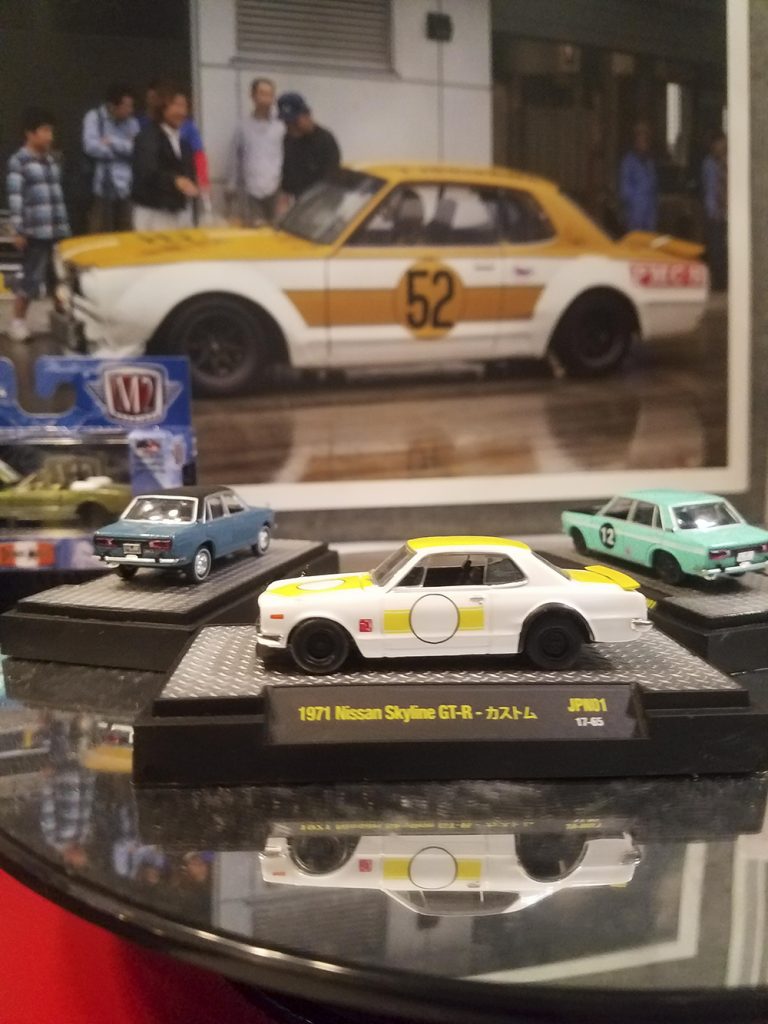 But the big announcement concerned a huge promotional deal with Coca-Cola that was just announced at the show that day. Scheduled for Fall 2018, details were still being finalized, but it will involve multiple scales and some new castings too. Stay tuned! 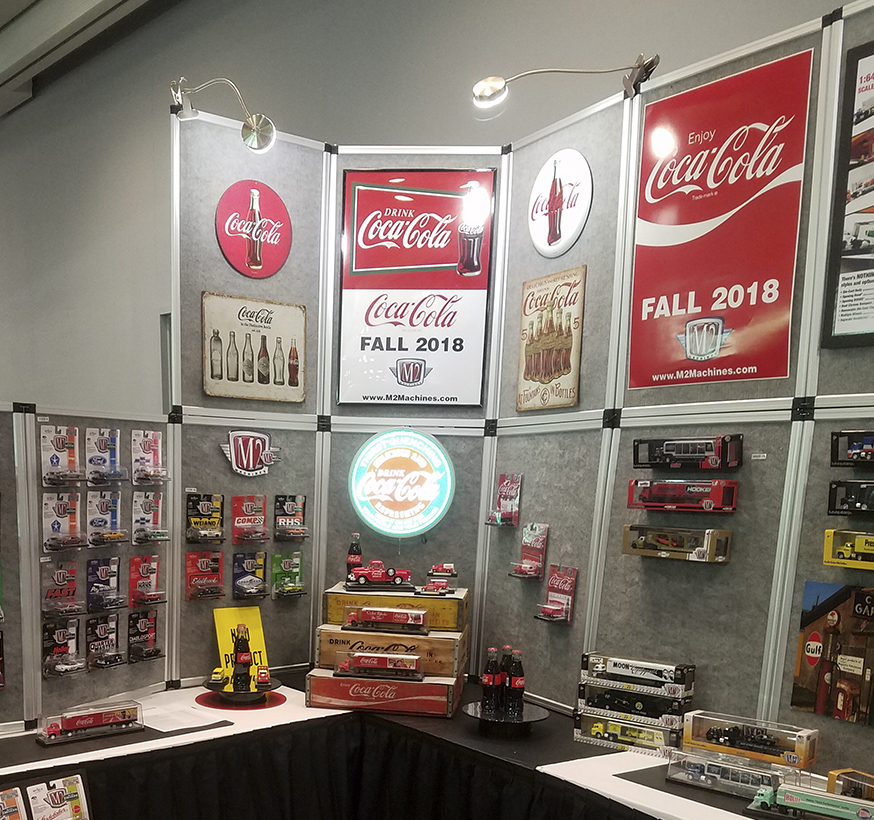 AUTOart become something of a specialist when it comes to specialty hyper exotics. Koenigsegg touts its latest creation as the world’s first “megacar” and it boasts an astonishing 1:1 horsepower-to-kg weight ratio, hence its (slightly awkward) name “One:1.” No reservation about its capabilities though. It can pull 2Gs of lateral grip thanks to more than 1800lbs of downforce at 273mph—which means it can go 273mph! (1340hp will do that.) Mega indeed. AUTOart’s model is pretty mega too. Have a look for yourself. 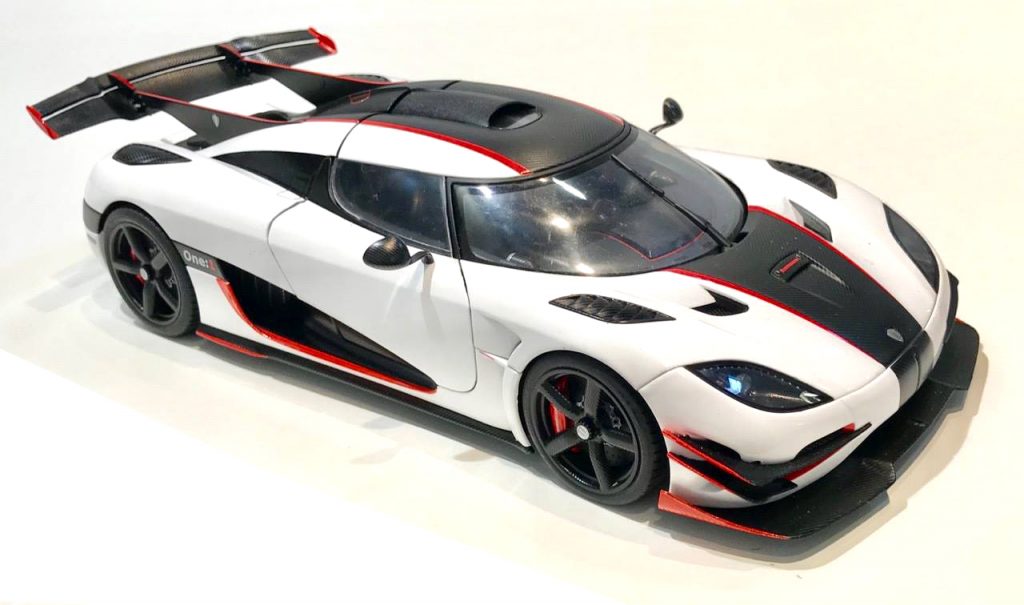