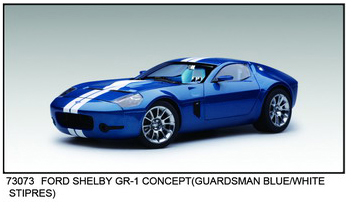 Now that Ford and Shelby are once again making automotive magic together, several new dream machines bearing the distinctive snake logo have rolled onto the world stage. Some, like the GT500 Mustang, have made it to production, while others have so far only been seen in concept form. One such concept that Shelby himself has a special fondness for is the GR-1 Concept — a modern reinterpretation of the classic Cobra Daytona coupe Shelby built to take on Ferrari at the high-speed sportscar tracks like Le Mans.

Ford and Shelby have announced no official plans for a production version, but that doesn’t mean you can’t have a GR-1 of your own. AUTOart has released two in 1:18 — one in Guardsman Blue (the most famous Cobra color) and one in Silver Metallic (like the show car.)