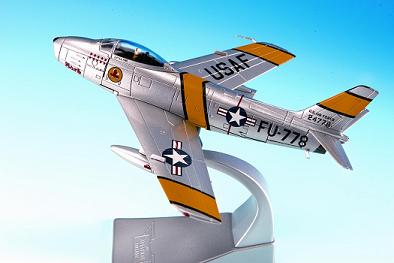 The F-86 Sabre was the fighter that ushered the United States into the Jet Age, and its effectiveness over the skies of Korea cemented its place in aviation history. Corgi celebrates the Sabre as part of its Aviation Archive series, and the plane it chose to model is that of Capt. Ralph Parr, a double-ace during the Korean conflict. Parr was a member of the 334th Fighter Squadron, a highly decorated unit that has inspired a four-piece special series of which this F-86F is the final installment. As with most Corgi pieces, it has provisions for gear-down display or can be shown in-flight on the included stand. A detailed cockpit with pilot and a pair of drop tanks round out the package.