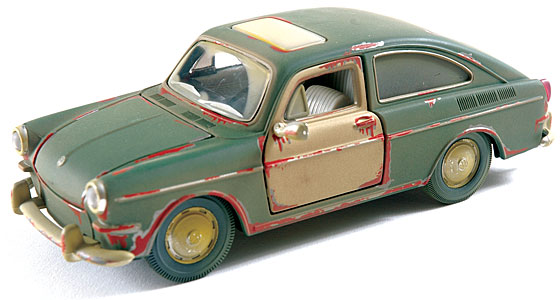 Maisto Old Friends 1967 Volkswagen Fastback » 1:24-scale » $20
Maisto’s Old Friends line may not be the most attractive series in its extensive line of diecast cars, but it certainly is one of the most unique. Aged to perfection, the Volkswagen Fastback looks right at home in multiple tones of simulated primer, dust, rust and body filler. It even feels gritty to the touch. Special details include grimy windows and soiled tire sidewalls. Really nice touches are the wiper trails on the windshield. The doors and front bonnet open to reveal moderately detailed and clean interior compartments. Dusty 1:24-scale companions to the Volkswagen Fastback include a Beetle and Bus, Mustang Fastback, Jeep Rubicon and Chevy 3100 Pickup. Maisto also has Old Friends in 1:18-scale, featuring a ’57 Corvette, ’52 Citroen 2CV and 15CV models and a pair of Mercedes-Benz convertibles. maisto.com