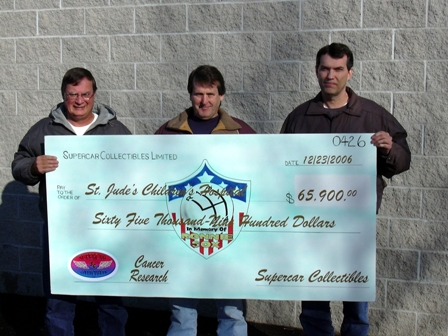 The gang over at Supercar Collectibles asked us to pass along a very special message:

“Thank you to the many motorsport fans, toy car collectors, hobby shops, toy vendors, and automotive venders, that purchased the Ronnie Sox 1:18 scale Commemorative ’67 Hemi Belvedere. You helped raise $65,900.00 that was sent to the St. Jude’s Children’s Cancer Research Hospital, as Supercar Collectibles donated 100-percent of the net profit from this die cast project. You who purchased this car made this possible. We also want to thank Die Cast Promotions/Highway 61 for the special pricing, plus the many fine publications that ran a mention of this die cast car. It was a real group effort, and you should be proud to have assisted in this cause.

Our business relationship with Ronnie Sox started in 1999, and after talking on the phone with him, meeting with him, talking cars, and sharing model car ideas and such, he became much more than a signed contract driver to us. Even now, we sometimes have to stop a moment, to regain our composure when speaking about him. He is missed by many, yet will never ever be forgotten. Even in his passing, he has now touched even more lives.

The $65,900.00 was forwarded to Diane Sox for her to present to St. Jude’s. All of the Commemorative cars are now gone, but we want everyone to know through Diane’s kindness, additional different cars of the Sox & Martin race team will be produced in the future. If interested you may contact Supercar Collectibles at www.Supercar1.com or 763/425-6020.”

Again, we thank you.