The early 1970s were a great time to be a kid who loved car toys. Hot Wheels and Johnny Lightning fueled the imagination with cool cars that were designed to go fast. Slot cars were going strong with the battle between AFX and Tyco. And the folks at Kenner came up with their own take on speed play: the SSP. 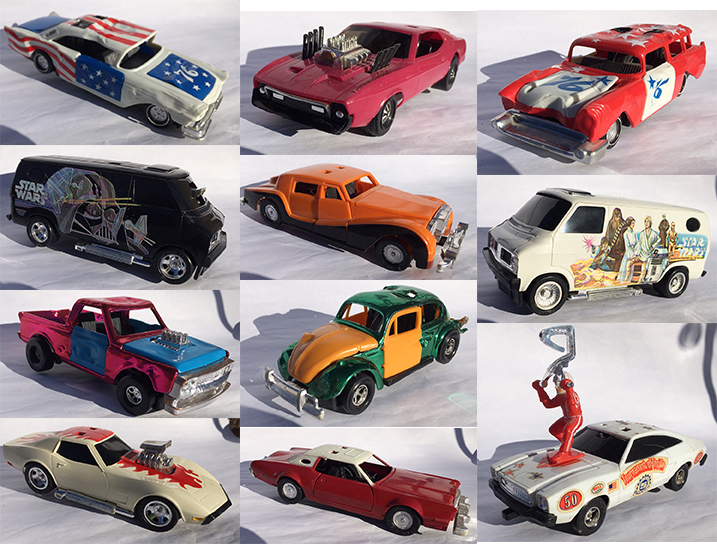 Kenner’s SSP (Super Sonic Power) cars featured a central gyro wheel powered by a ripcord that could propel them to ridiculous speeds. The brightly colored plastic cars were usually six to nine inches long—about the size of the popular 1:24 scale model kits. Details were generally well executed, but often compromised by the need to make the cars stand up to playwear, with chunkier parts and black rubber details. And of course, they all had either a visible giant fifth gyro wheel or holes in the roof to insert the rip cord.

The SSP line was made from 1970 to 1978 in the U.S., with many of the models available in other countries under different brands for a few years after that. Like Hot Wheels and Johnny Lightning, Kenner’s designs included a wide range of fantasy racers, plausible dragsters, and realistically proportioned stock cars.

The Super Stocker was one of their first reality based cars, a nicely scaled rendition of the Plymouth Super Bird. Licensing the design of real cars for toys was kind of a gray area at the time, so the early SSP models used nonspecific but suggestive names instead of the cars’ actual nameplates. The Super Stocker tends to sell for big bucks these days, as it was only in production for one year (it had a fragile wing that frequently broke off) and gets extra attention from MOPAR collectors. 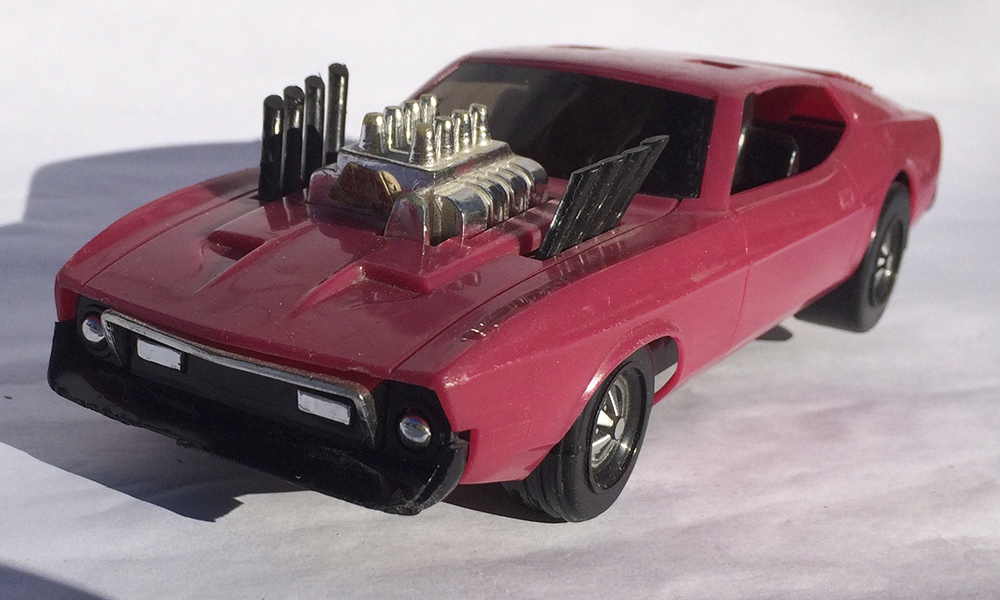 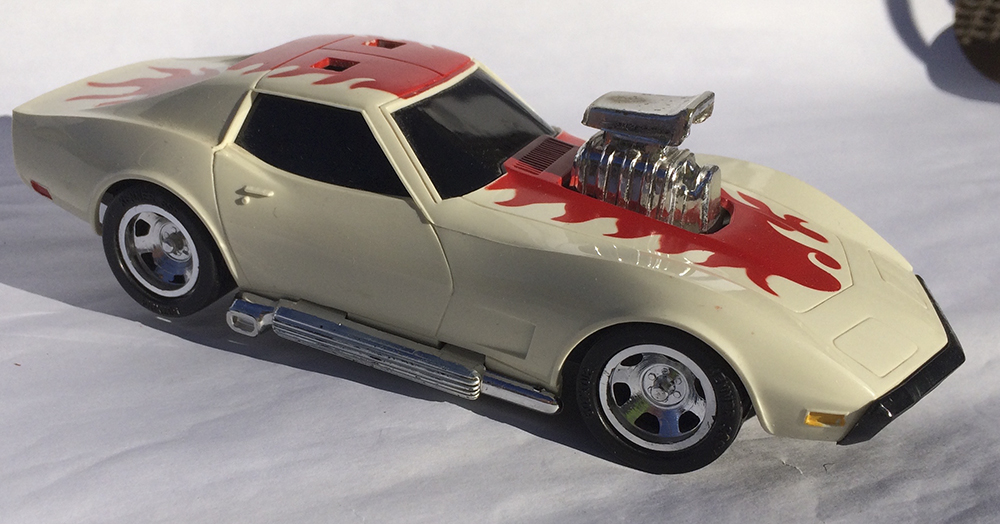 Later models based on real cars often included non-stock details that appealed to kids but might make purists cringe. The Boss Hoss (a Mach 1 era Mustang fastback), the Cuda (a second-generation Barracuda) and the V-1 (an early C-2 Corvette) all had well-proportioned bodies but with ridiculous engines and pipes sticking out of the hoods. 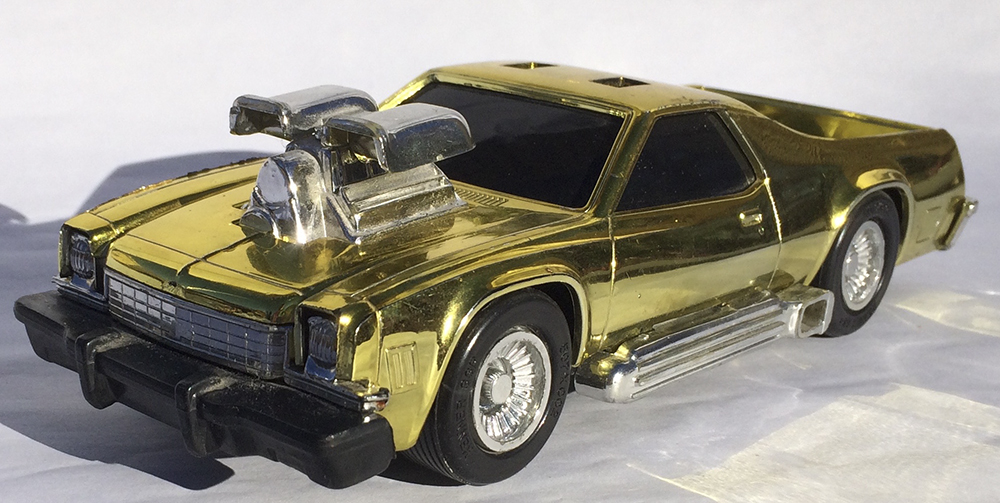 A later El Camino model looked more cartoonish with an even more ridiculous engine. The SSP line also included a Mustang II that was designed to do tailspins and other stunts as part of the “Tournament of Thrills” set.

Kenner reached way back in automotive history as well. 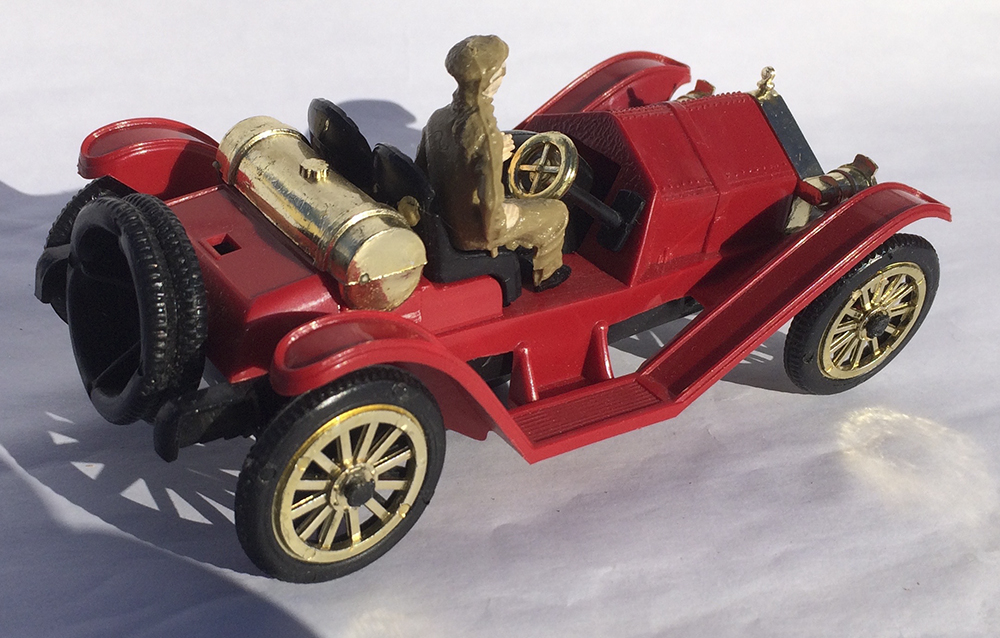 The Mod Mercer was a based on a 1910 Mercer Runabout (watch out for that fragile hood ornament!) and the Cord Roadster was a faithful reproduction of the 1930s Cord 810/812. 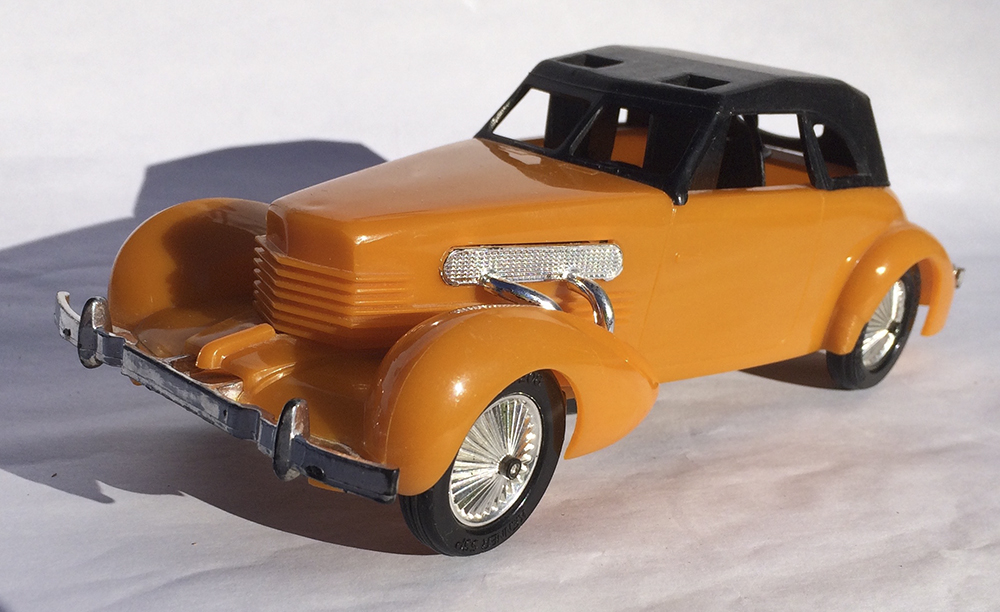 The Cord is fairly rare model, as it was only sold as part of the 1972  “4-n-1 Collectors Set” which contained one chassis, 3 bodies, and enough extra parts to assemble a fourth jalopy.

If zooming cars in a straight line was fun, smashing them into each other was a total riot. 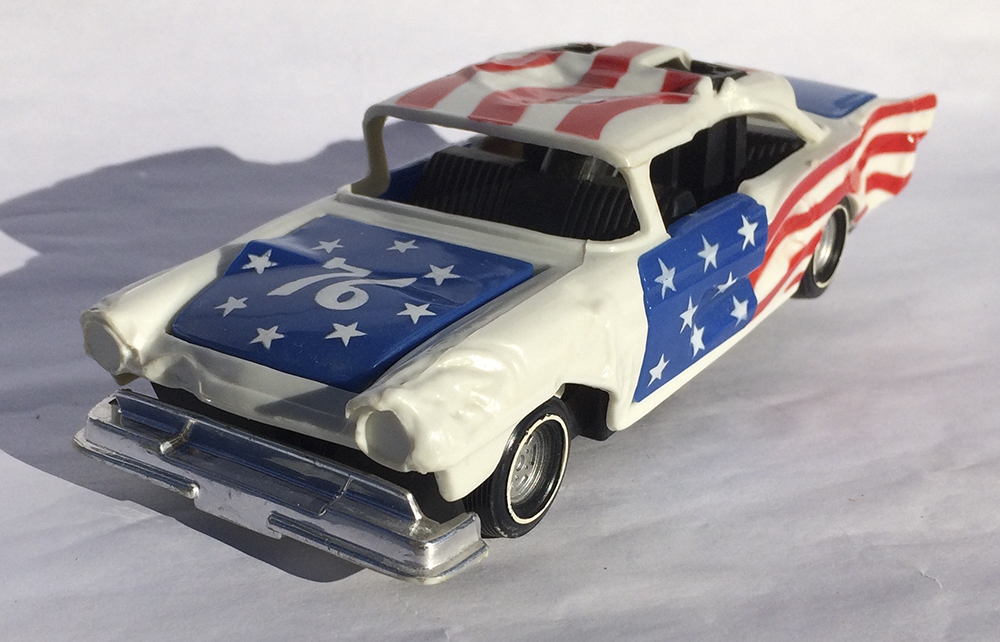 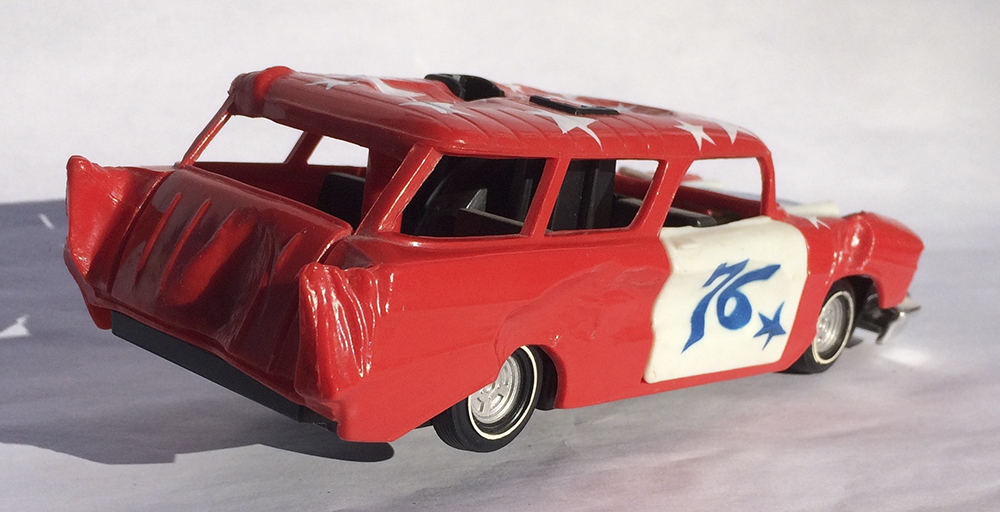 These came pre-dented and included contrasting colored fly-off parts for extra excitement during crashes. The bodies of the cars look like they were at one time nice models that had been melted and distorted to look damaged. The next year, SSP added the Tough Tom (early ’70s GMC pickup) and the Buggem (a VW Beetle). 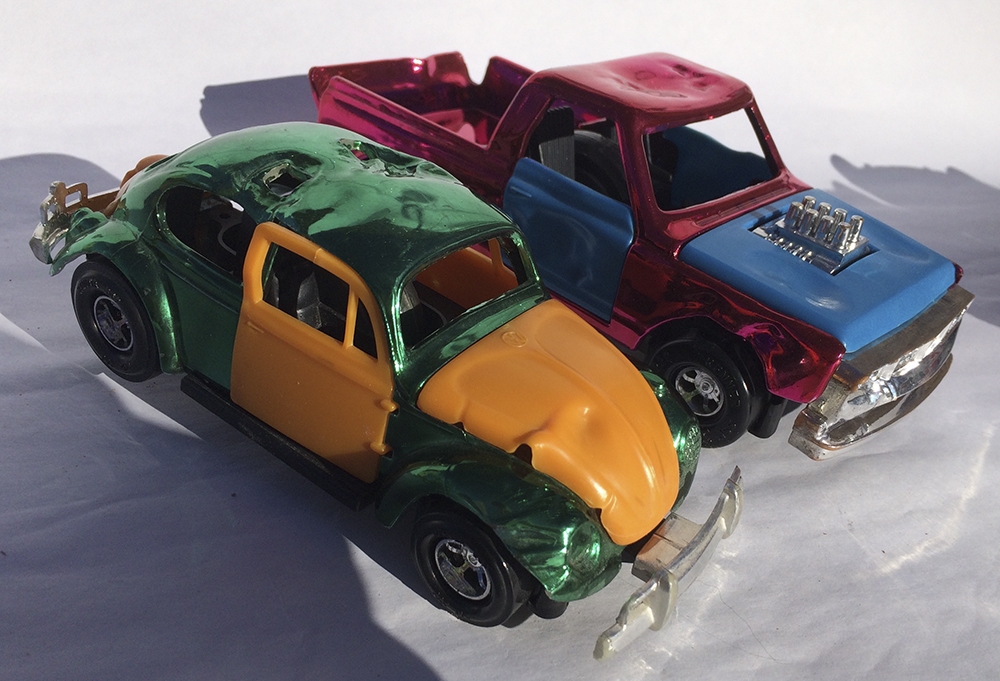 Subsequent Smash-Up cars were a bit different, in that the cars did not look damaged. The Classy Crashers set included the Sedan Royale (a Lincoln MK IV Continental) and the Luxury Limo (a nonspecific mid ‘60s Rolls Royce).

And in Europe, there was even a set featuring a Renault 4 and a Citroen 2CV.

The final American SSP models were custom vans, seemingly based more on Dodge than any other marque. 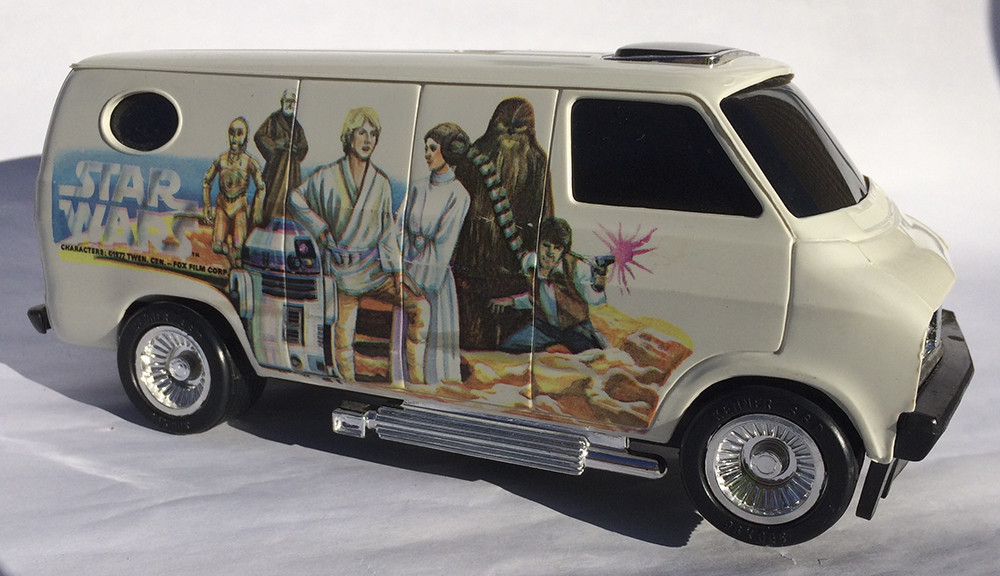 A Star Wars themed set was final hurrah before kids got their first Pong consoles and moved onto video games. Hasbro briefly revived the SSP line with new models in the mid-1990s, but they were short-lived. 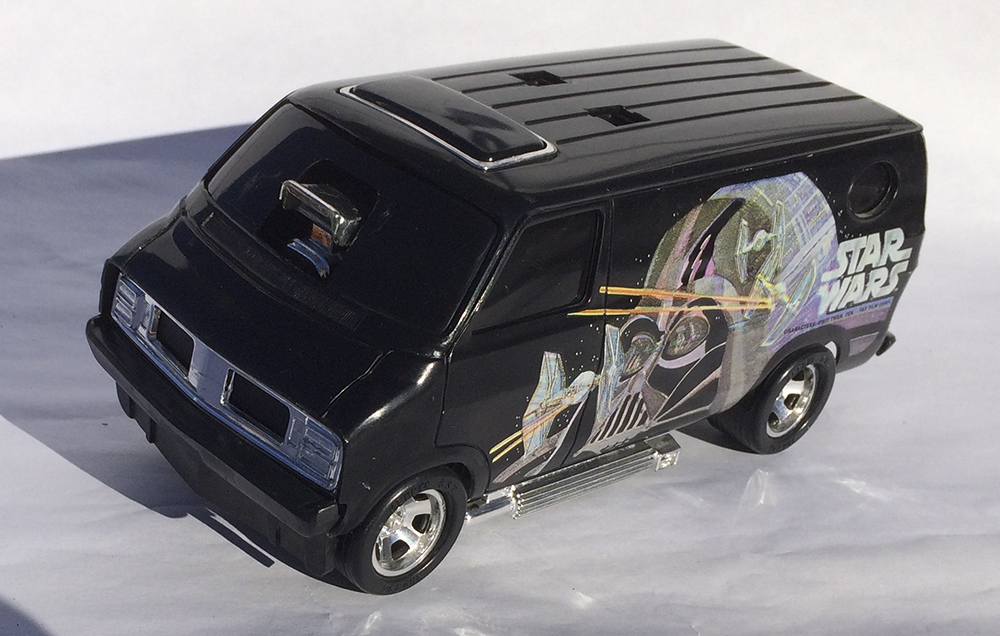 Many collectors of SSP cars try to obtain pristine examples, along with some beater cars so they can occasionally fire them up and zoom them across the room. The racing action is a fun now as it was back then, which is why the cars remain popular today.