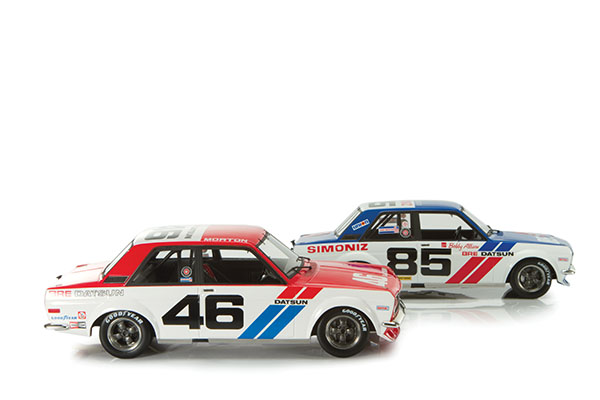 The story behind the Brock Racing Enterprises (BRE) Datsun 510s is one of pride, personality, and perseverance. The pride element came courtesy of Datsun’s arch rival Toyota. Founder Pete Brock had inherited an inroad to Toyota when the Japanese firm bought the Hino brand — which BRE had done design work for — in 1967. Brock created one design for Toyota, and a preliminary deal was struck to have BRE campaign the new Toyota 2000GT coupes in 1968. However, at the last minute, Toyota decided to go with Brock’s former employer Shelby American. Feeling jilted, Brock wanted to exact revenge on Toyota — and kick a little dirt in the eye of his old boss in the process. So he started looking around for a suitable vehicle to beat the 2000GT with. The ideal solution presented itself in the form of rival Datsun and its strangely unsuccessful 2000 roadster. Brock was convinced he could win with it — if only he could convince Datsun to let him try!

This was harder than it might seem. Datsun’s factory racing effort in the U.S. was being headed up (poorly!) by the son-in-law of a Datsun executive, so Brock’s inquiries quickly hit a dead end. But he persevered, and in a stroke of coincidental good fortune, Brock’s former boss at Hino just happened to be an old schoolmate of Datsun U.S.A. President Yutaka Katayama — Mr. K himself! Brock made his pitch to Mr. K, who agreed and quietly had BRE shipped a pair of roadsters from Japan. When the BRE-prepared cars showed up on track at the start of the ’68 season, no one was more surprised than the Datsun factory team — particularly when they got beat! In following seasons Mr. K’s baby — the 240Z — was introduced, and BRE was put in charge of the factory race program, dominating in SCCA club racing. 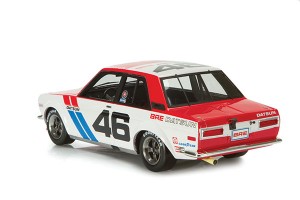 By 1971, imports were becoming hugely popular in the U.S. and the SCCA decided to expand its Trans-Am series to include small-displacement imports. They established the 2.5 Trans-Am, or Two-Five Challenge. The little 510 sedan was selected by BRE to fly the Datsun flag. At Mr. K’s insistence, the American-market 510 had been imbued with sporty attributes from its introduction: an independent rear suspension, even weight distribution, light weight and a potent (and tunable!) engine. The boxy little body concealed quite a nimble little performer, and with a level of factory backing that exceeded any other team in Two-Five BRE managed to take the title with lead driver John Morton, supported by Mike Downs. The team defended in 1972, adding a third “guest” car to the team. Over the course of the season, guest drivers included Bob Sharp, Peter Gregg, Sam Posey, Hershel McGriff, and for the final two races at Laguna Seca and Riverside, NASCAR legend Bobby Allison. Guest drivers won several races and Morton easily took the title for the second — and, as it turned out, final — year of the Two-Five championship. The BRE 510’s success was key to establishing Datsun’s performance image in the U.S. Brock’s striking livery became the face of the brand for many enthusiasts. It’s a car that deserves to be modeled, and it’s the perfect choice for TrueScale Miniatures new spinoff brand — The RetroMotoring Collection (RMC.)

MAKING A NAME FOR ITSELF 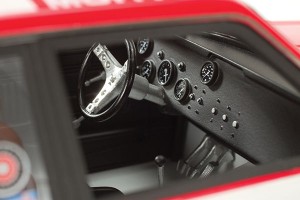 Like BRE itself did, RetroMotoring is making quite a dramatic entrance with the 510. They’ve chosen to launch the project with two versions: Morton’s championship-winning no. 46, and the guest car no. 85 as driven by Bobby Allison in the final two races of the ’72 season. What you see here are the very first two RMC prototypes. They are resin, with tons of surface detail molded into the sealed body shells and nice crisp panel edges. The seemingly simple three-box shape features quite a bit of subtly sporty styling in the form of character lines and contours, further enhanced by BRE’s flared fenders to clear up-sized racing rubber — all of which RMC renders beautifully. The models feature separate castings or etchings for all of the trim, from windshield and backlight reinforcements, to wiper blades, to window surrounds. The photo-etched hood and trunk pins are amazingly delicate. The rear valence features an external fuel filler and a safety kill switch. RMC even got the notches in the rocker panels where the racing jacks lift the car during pit stops! It should be noted that the 46 car wears 1971 livery, while the no. 85 carries 1972 colors with its Simoniz and Coca-Cola sponsorship. The placement of sponsor decals evolved slightly race to race, but both models are extremely authentic to period photos — RMC really did their homework. 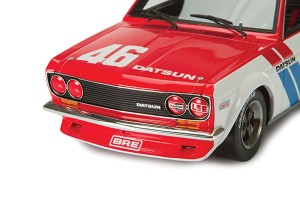 The doors do not open, but the tall greenhouse and open windows give an excellent view of the stripped-out race interior. A low-back racing bucket seat and slim 4-point roll cage were considered top-notch safety equipment in 1971-72, but look pretty dicey by today’s standards. Good detail though! There’s a nice woven 4-point racing harness as well, but I got a good chuckle from the scripts on the shoulder straps: I’ve never heard of “Sinpson” racing belts! That’s ok. Like I said, these are the first prototypes — plenty of time to help the overseas factory tune up their spelling. There’s a transmission-tunnel-mounted switchbox just aft of the shift lever, and the dashboard has been replaced with a flat panel housing racing gauges with very legible faces.

The hood and trunk are sealed, so the fuel cell and engine are left to the imagination. In 1971 the BRE 510s ran hopped up versions of the L16 1595cc inline-4, bolstered by a host of factory–tuned parts to push output to an estimated 190 horsepower — double the stock figure, and pretty fierce for a car weighing barely 1,700 pounds! Goodyear racing tires mounted on tiny 13×5.5-inch American Racing Libre magnesium wheels put the power down and kept the nimble little 510 stuck to the track. The cars have been restored and now run aluminum Libres painted dark gray to resemble the raw magnesium color. It is this version that RMC’s replica depicts to excellent effect. Brake detail — discs in front, drums aft — is visible through the spokes. The wheels need a slightly wider stance to perfectly match the way the real BRE 510’s Goodyears filled its wheel wells, but otherwise the rolling stock is spot-on. There is some modest chassis detail; the highlight is the big-bore ceramic-coated exhaust tip which you can see when the car is upright. 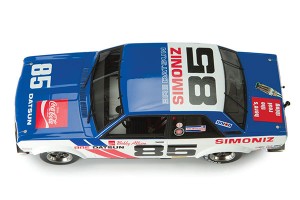 Peter Brock is one of those automotive legends who had a hand in many famous and memorable machines: the Corvette Sting Ray, Shelby’s Cobra Daytona Coupe, and Datsun’s 240Z to name a few. But his greatest racing achievement may have been in taking the fight to the racing establishment — specifically Alfa Romeo and BMW — with the mundane little 510 sedan and whipping them at their own game. In doing so, BRE put Datsun on the performance map in the U.S. and made legions of fans in the process. Many of those fans doubtlessly collect diecast, and they will be thrilled with this new RetroMotoring  Datsun duo. And collectors of all types should be happy to see this new brand, as their choice of subjects and the craftsmanship with which they have executed both bode extremely well. Prices, production numbers and most other details had not been finalized at press time (such are the perils of exclusive first looks at prototypes!) but the importance and the quality of these models are undeniable. They’ll be worth it. 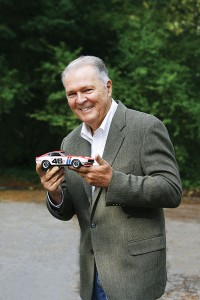 Pete Brock started his career at the Art Center College of Design in Los Angeles as a walk-in straight off the street. He had been studying Engineering at Stanford, but felt a school more singularly focused on automotive design would be a better fit. The problem? Art Center was a school for art professionals, not inexperienced kids with no work experience or formal training. But what Brock did have was a singular talent — and the gumption to walk in and try. Fortunately for him, the admissions director was impressed with the former and not put off by the latter. Brock was accepted. While at Art Center he honed his skills and made connections that soon landed him a job as a designer; at the tender age of 19 he became the youngest designer in the history of General Motors! His tenure at GM was fairly brief — but he stayed long enough to sketch an outline for the Corvette that Bill Mitchell selected to become ’63 split-window Sting Ray. Not bad for a 21-year-old kid!

But Brock’s passion was racing, and with GM’s corporate ban on factory-backed racing still in effect he decided to move back west to pursue his racing career. His design, driving, and engineering skills got him noticed by one Carroll Shelby, who was preparing to open his own driving school. Brock became his very first official employee, hired to run The Carroll Shelby School of High Performance Driving. As Shelby branched out into vehicle design, Brock got back to his passion. He helped craft the visuals that distinguished the GT350 from mundane Mustangs, but his crowning design achievement was surely the beautiful Cobra Daytona Coupe! As Shelby mothballed the Daytona Coupe to concentrate on running the GT-40 Le Mans program, Brock left to start his own firm: Brock Racing Enterprises, designing racing concepts for Hino, De Tomaso, and Triumph before connecting up with Datsun. The rest, as they say, is history!