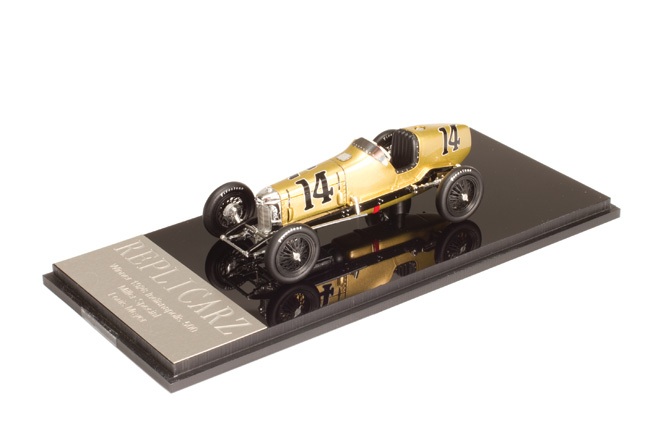 The Fothergill brothers at Replicarz are at it again, this time in 1:43 scale resin, and bringing us some of the most delicious cars that ever raced the Indy 500. Manufactured under their own Replicarz brand name, these will be a joy for anyone who loves spending that one day in May—glued to the TV or there in person—hearing the melodious rendition of “Back Home Again in Indiana” followed by “Ladies and gentlemen, start your engines!”

Harold Arminius Miller’s creative vision, along with his obsession with the smallest details, made the race cars and engines coming out of his L.A. shop beautiful works of art that ran as good as they looked. Miller’s cars were so dominant at Indy that they represented 83% of the starting grid for the 500 between 1923 and 1928! Along with six Indy-winning race cars, 12 other cars won the race with Miller engines that were coveted for both power and reliability. T e Great Depression took its toll on Miller’s business, and in 1933 he declared bankruptcy. He was bought out by his shop foreman, Fred Offenhauser, and the business continued—later under partners Louis Meyer and Dale Drake—to build racing engines on into the 1970s based on Miller’s original designs.

Above: Miller engines powered almost every Indy Champ of the 1920s, including Louis Meyer’s ‘28 winner. The engines lived on as Offenhausers for decades to follow.

Replicarz has given us Louis Meyer’s Miller Special that he drove into the winner’s circle at the 1928 Indy 500, this was Meyer’s fi rst of three career wins at Indy. Replicarz’s model is beautifully executed with a gleaming gold finish, black racing numerals and several photo-etched pieces and lots of chrome. The wire wheels are molded plastic, but look totally credible with their delicately executed spokes, and are mounted with white-lettered Firestone balloon tires. 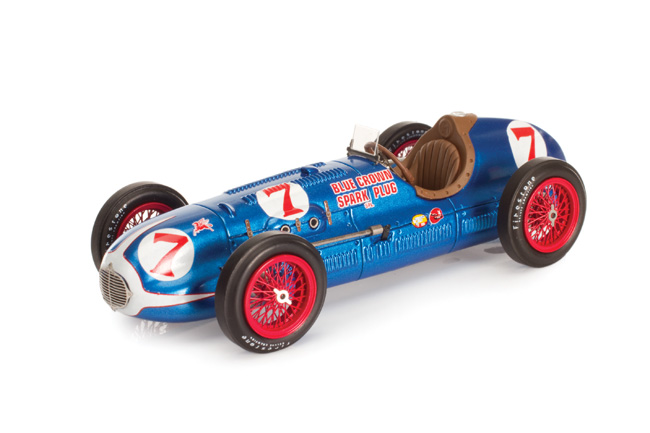 Above: Bill Holland finally broke through with a win in 1949.

When Lou Moore hung up his driving helmet and became a team owner, he sought the Indy 500 victory that had narrowly eluded him as a driver. For the 1947 race, he hired hot shoes Mauri Rose and Bill Holland to drive his cars—Offenhauser powered Deidts. The rookie Holland led most of the way, but a late-race pit board miscommunication caused him to slow, and his teammate Mauri Rose passed him for the win in his Blue Crown Spark Plugs-sponsored no. 27. Moore brought the winning car back for the 1948 event, again with Rose at the wheel and Blue Crown on the flanks. Only the number was different; it now wore no.3. T e car was still fast, and took the checkered flag with teammate Holland in 2nd for the second consecutive year. It could have been three in a row but for a magneto failure on Rose’s car in 1949, finally allowing Holland to cross the line first at the Brickyard in his own no.7 Blue Crown Special— giving Moore three consecutive victories, and his 5th overall as a team owner. 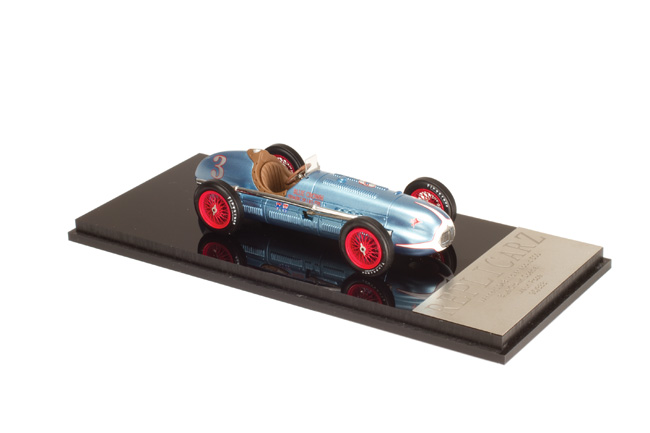 Top: Mauri Rose passed teammate Bill Holland for the win in the closing laps of the 1947 Indy 500.
Bottom: The 1947 car was repainted with a number 3 but the result was the same for Rose in 1948.

Moore, Rose, and Holland were able to convert a single car configuration into three winners, and Replicarz does the same thing in 1:43 scale. T e Blue Crown Specials from ’47-’49 diff er only in paint (the ’47 was repainted and won again in ’48), so all use the same excellent mold. T ere are delicate louvers over the Off y engine and down the flanks of the cars. There’s a bulge in the left side where photo-etched intake trumpets sit almost flush with the body, and a nicely chromed exhaust header exits on the right. Delicate steering rods run half the length of the car to connect to wonderfully molded front suspension pieces. Intricately spoked wheels (with etched spinners) are wrapped in Firestone racing tires with proper sidewall markings. 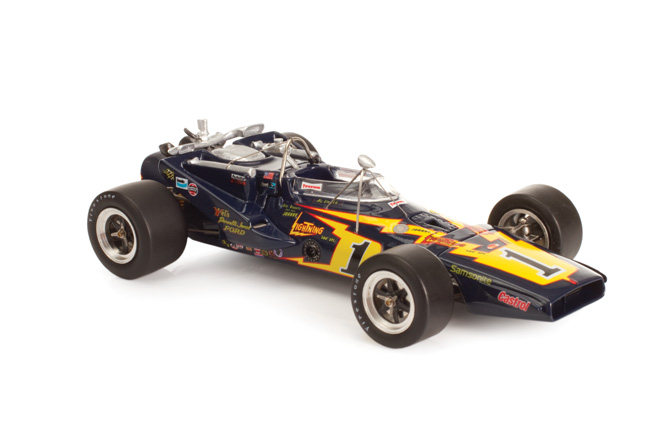 Above: Unser Sr. went back-to-back, winning again in 1971 with the same Ford-powered setup.

In 1970-71, Al Unser won back to back Indy 500’s in his Johnny Lightning-sponsored PJ Colt. Working for the Vel’s/Parnelli Jones racing team, Crew Chief George Bignotti and Co-Chief Jim Dilamarter cloned two additional pavement cars from a highly-modifi ed Lola team car and fi tted with turbocharged Ford four-cam Indy engines. Unser also won the USAC National Championship Trail in 1970 using a combination of the three pavement cars and one dirt car. Replicarz’s ’70 and ’71 Unser Johnny Lightning cars are drop-dead gorgeous. With rich blue paint and the high-resolution livery rendered in yellow, red, white and black, the cars have a level of detail rarely found in this scale. T e Firestone tires add realism and the use of fi ne wire and photo-etched pieces really kicks the quality up a notch. Take a magnifying glass to the livery and you will be amazed. Even the tiny sponsorship stickers are legible. 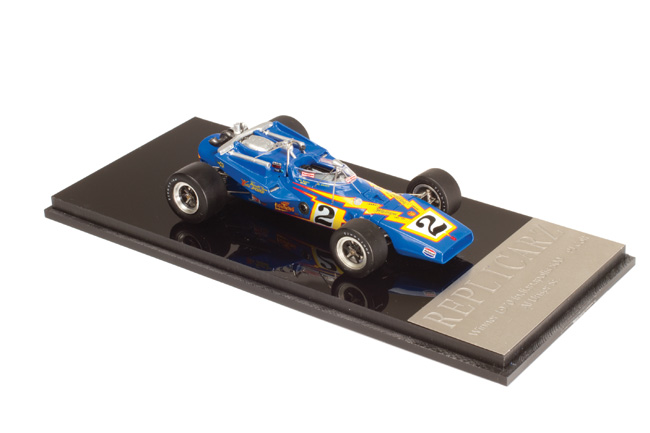 Each of these cars comes mounted on a black acrylic base with an engraved identification plate. A clear acrylic cover completes the presentation. All are historically important to Indy Car fans and it is nice to see that Replicarz has done such a nice job in making these for us. T ere is even a hint that sometime in the future we may see these same cars in some larger scales (1:18 and possibly beyond). But, in any scale these are highly recommended. Tanks, Mark and Brian!