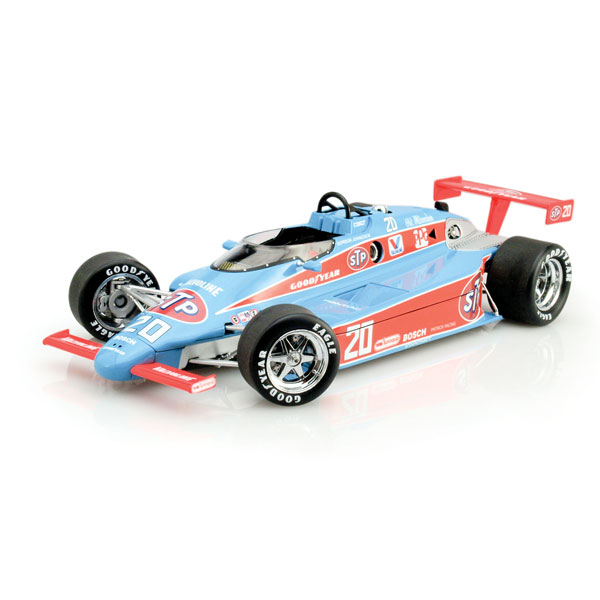 For all the preparation and planning, Indy can be a cruel place. Gordon Johncock found that out in 1984, when the March 84C he was piloting crashed on lap 104, injuring his ankle and twisting the car up beyond repair. Powered by a Ford-Cosworth DFV turbo V8 making an impressive 800 horsepower, Gordon’s March wasn’t alone. Tom Sneva (another DNF – blown CV joint) and Rick Mears (who won that year) left the starting line in 84Cs, as well. That means that Replicarz can make the most of this Carousel 1 mold set, and from what we see in this hand-built advance sample, they plan to. Given the 11-year difference between this car and Johncock’s victorious ‘73  Eagle-Offy, the tech gap between the cars is dramatic, as you’d expect. Though sleeker on its outside, when this beautifully liveried and painted model splits (one of the coolest tricks in all of 1:18), it does so literally from nose to tail, exposing everything from the triple fluid reservoirs at the foremost bulkhead, to the nicely patterned and rivet-detailed carbon fiber shell. Behind that armor is the stressed-member V8. This one’s a real treat: among all of the sharply cast pieces, we counted a couple of different shades of metallized finishes, and at least two different sheens of graphite black on the engine and transaxle, in between all the vinyl and plastic wiring and plumbing. Once you’re done tracing all the forward-running cooling pipes and the full-on cockpit (the gauges alone are almost worth this one’s price), break out your best squint to see the spring within the manifold blowoff valve and the impeller nested inside the turbo intake. Cruel day – cool model. Highly recommended.  — Joe Kelly, Jr.