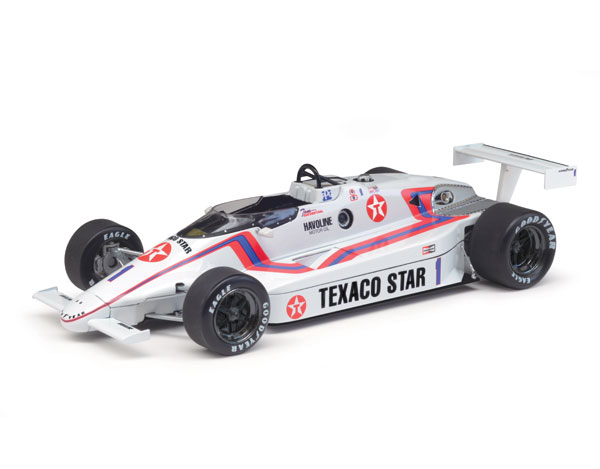 After winning the Indianapolis 500 in 1983, Tom “The Gas Man” Sneva returned to Indy in 1984 with a March-Cosworth sporting his reigning champion’s #1, and snared the prestigious pole position with a scorching 210.029mph — over 2mph faster than Howdy Holmes, who qualified second. Rick Mears was the third-place qualifier, and ultimately won the race. Sneva led more laps in 1984 than all contenders except Mears, but retired after his 168th lap due to a failed CV joint.  Replicarz has recreated Sneva’s red, white, and blue Texaco March 84C in diecast using the same tooling used to previously build Mears’s 1984 Champion, and it’s a  gem of a model. The stance is correct, and the white paint with red and blue livery captures the pole winner perfectly. Lift off the one-piece upper body and the molded composite tub and well-detailed cockpit jump out; the former is nicely rendered in faux carbon fiber, and the latter has a three-gauge instrument panel and fabric and photo-etch belts. At the rear, the turbocharged Cosworth DFX engine and all of its accessories are compelling. All of the detail is there, right down to the turbo impeller. This is a car worth having not only for its place in history, but also for the immaculate execution by Replicarz.  — Bill Bennett