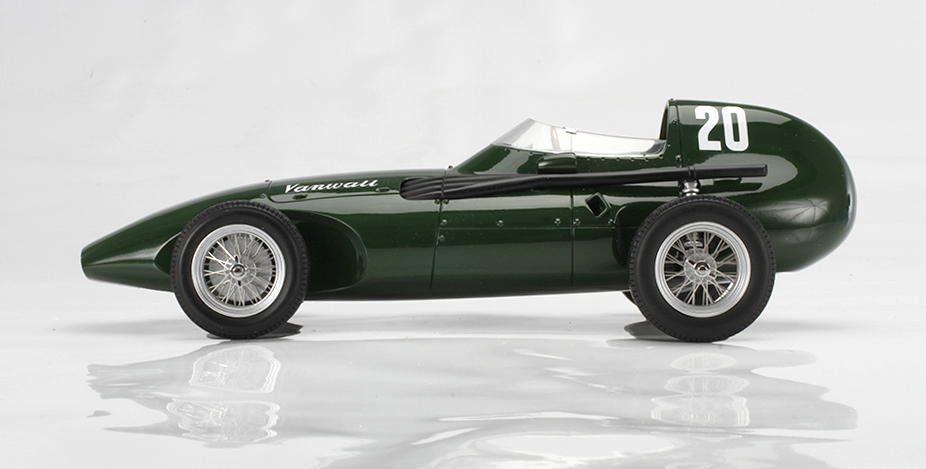 Vanwall holds the distinction of being the first British car to win in Formula 1 era of Grand Prix racing (1950+). It also holds the honor of having won the very first F1 Constructor’s Championship (1958.) The team was founded by Tony Vandervell, a wealthy industrialist who had previously been involved in the BRM V16 project in the early 1950s, but that car’s failure led him to create his own F1 team in 1954. The Vanwall debuted using modified Ferrari chassis and an engine based on four single-cylinder Norton Manx motorcycle engines joined in a common crankcase (Vandervell was a majority shareholder in Norton.) That borrowed chassis hampered results the first two seasons, so for 1956 they brought in a promising young designer by the name of Colin Chapman—of Lotus fame—to develop a tubular space frame chassis (to reduce weight) and a revised suspension (to improve grip and balance.) Stirling Moss—who was contracted with Maserati for 1956 championship races—was asked to evaluate the car in a non-points event at Silverstone to race for the British Racing Drivers’ Club International Trophy. He won handily—giving the Vanwall its first victory and proving the soundness of Chapman’s design. 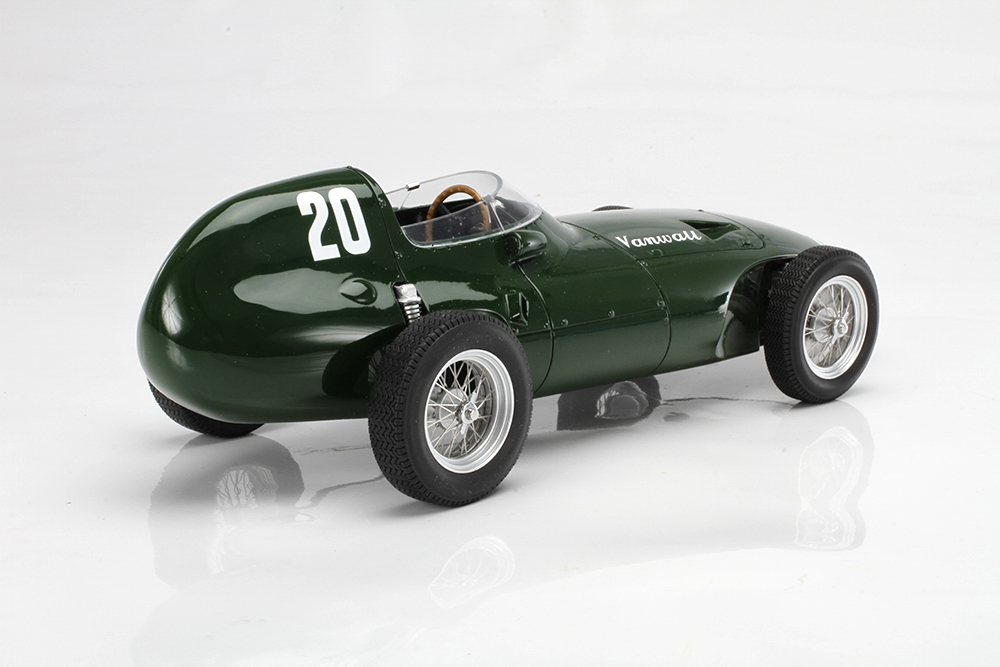 So impressed with the car’s potential was Moss that he signed with the team for the full 1957 season, and that year’s British Grand Prix would be Vanwall’s proudest moment. Moss put his no. 18 on pole, with teammate (and fellow Brit) Tony Brooks starting 3rd in the no. 20. Moss led the early going but developed an engine misfire. Knowing the ailing no. 18 could not win, the team made the decision to swap Moss into the no. 20 car during a pit stop. He rejoined the on lap 26 race in 9thplace, but gradually worked his way through the field, setting and resetting fastest laps while chasing Frenchman Jean Behra in a Maserati, who had inherited the lead when Moss pitted, and Mike Hawthorn in the 2nd place Ferrari. Late in the race Behra suffered a clutch failure, spewing debris which also caused a tire puncture for Hawthorn. When he pitted to change tires Moss swept back into the lead and never looked back. The record books show Moss and Brooks sharing the victory in the no. 20, meaning not one but two British drivers delivered the first ever F1 victory for a British manufacturer, and they did it at the British Grand Prix! 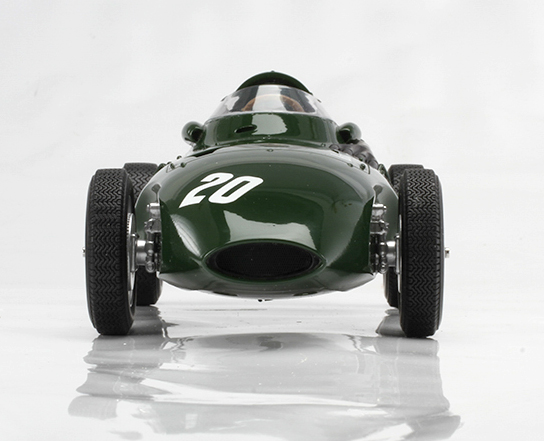 Replicarz is poised to release the 1957 British GP-winning Moss/Brooks Vanwall VW57 Special as part of its 1:18 Grand Prix series, and they gave us an advance look at the final pre-production sample of this sealed body resin racer. As many fans know, classic-era race cars in international competition were assigned their color by nationality. The “British Racing Green” is rich and smooth, and the reflections it picks up accent the Vanwall’s curves beautifully. As you survey the car a couple of interesting things immediately jump out. 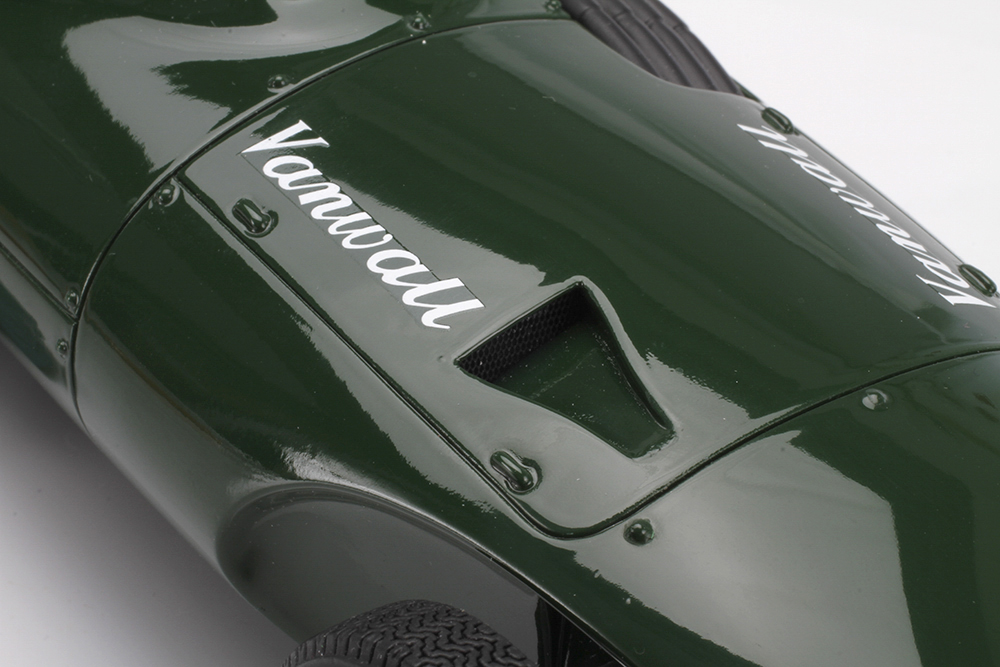 First, that the Vanwall’s shape foreshadows the simple elegance Colin Chapman would later employ on his own Lotus formula cars. Second, that it looks unusually tall compared to other 1957 cars. This is not an optical illusion. The Vanwall used a copy of the Ferrari transmission from the 1952-53 Tipo 500 augmented with a 5th forward ratio and Porsche synchromesh. That gearbox was designed to sit under the driver’s seat in the older upright Ferrari, necessitating a similar placement in the Vanwall. With Moss perched atop the gearbox the Vanwall was by far the tallest car in the 1957 field. Aerodynamicist Frank Costin (who would later co-found the sportscar manufacturer Marcos) penned the fuselage-like body, employing a cigar-like taper to help cover the increased height. Even the exhaust header was laid flat to reduce drag. The resulting shape was slippery enough to make the Vanwall the fastest car in a straight line. 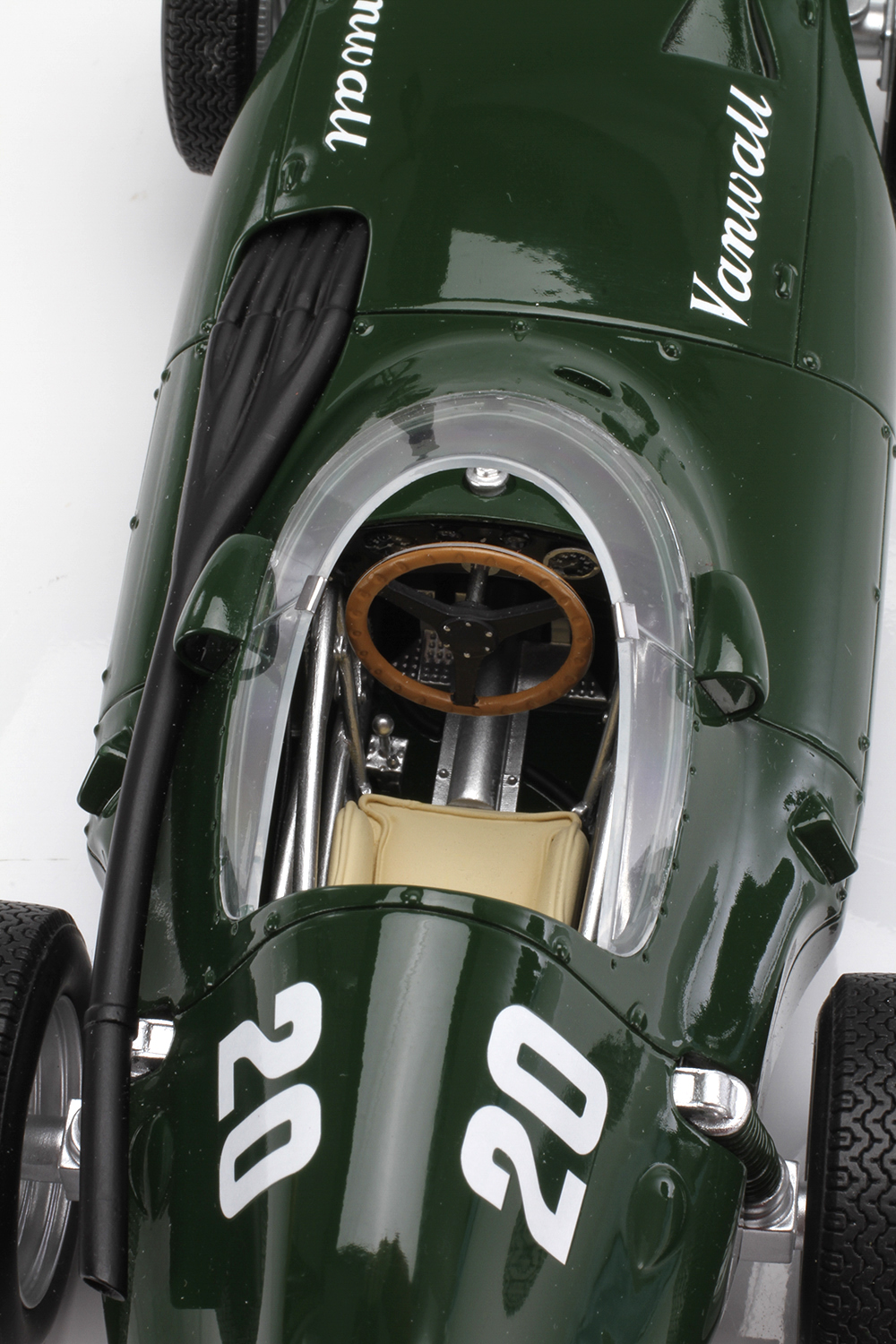 That tall driver’s position is on display in the superbly decorated interior. Tubes from Chapman’s space frame bracket a squarish bucket seat wrapped in beige material that even has the correct piping around the edges. No safety harnesses though—Moss and his contemporaries were devil-may-care when it came to driver protections! A tiny gear lever actuates a short linkage to the gearbox under the seat, while an instrument panel shows four gauges with legible faces. The gauge to the right (a speedometer?) has a different color bezel than the others, and sure enough photos of the real no. 20 show that to be precisely accurate! So is the wood-rimmed 3-spoke wheel. Speaking of wheels, the replicas of the 16-inch wire spoke Borrani wheels are lovely; realistically shaped and spaced spokes are capped with a two-eared knock-off spinner. Tires are convincing replicas of the Dunlop R5 treaded racing tires that helped the Vanwall maximize its aero grip advantage. Something of the coil spring suspension for the De Dion rear axle can be seen molded into recesses in the rear bodywork. 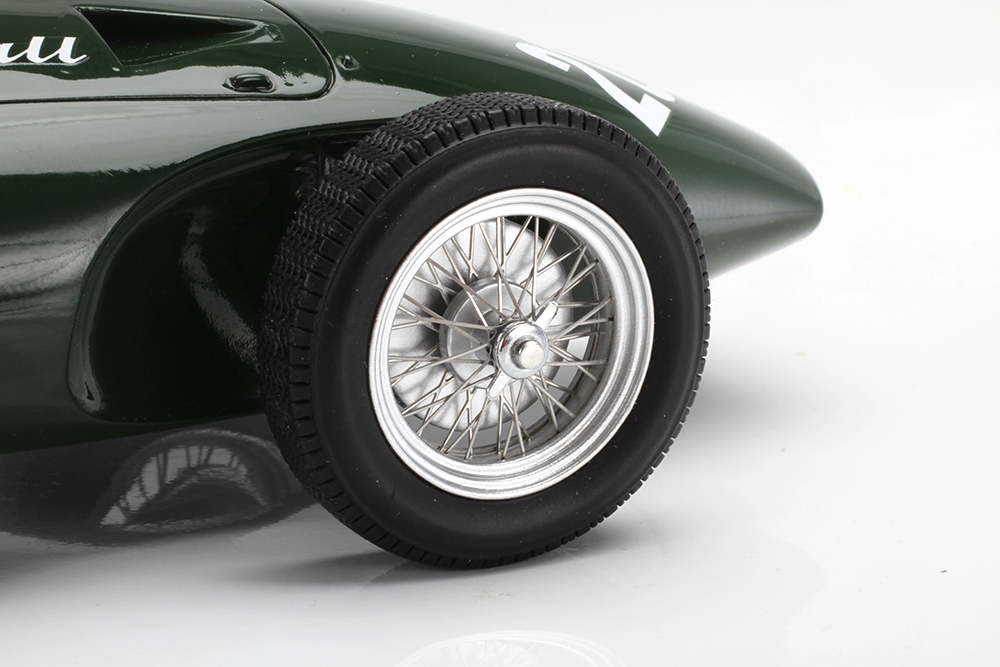 Sir Stirling Moss is generally considered the greatest Formula 1 driver never to win a driver’s championship—a dubious honor that is a commentary not on his driving skill, but on the extraordinary quality of competition during the era in which he raced. In winning the 1955 British Grand Prix for Mercedes he became the first British driver to win his home race in the F1 era, and came 2nd only to his teammate—the great Juan Manuel Fangio—for the 1955 Driver’s Championship. It would become a familiar pattern; Moss would finish 2nd to Fangio for three consecutive seasons—1955-57—and again finish 2nd (by a single point!) to countryman Mike Hawthorn in 1958 while helping deliver Vanwall the very first Constructor’s title. Moss would finish no worse than 3rd in the driver standings for the final seven seasons of his career, and remains in the Top 10 all-time in terms of winning percentage today. The 1957 British Grand Prix must surely rank among his greatest performances, driving a replacement car through the field to capture the first ever F1 victory for a British marque, and do so on British soil. This car is steeped in history, and is the perfect choice for the next in Replicarz’ Grand Prix series. 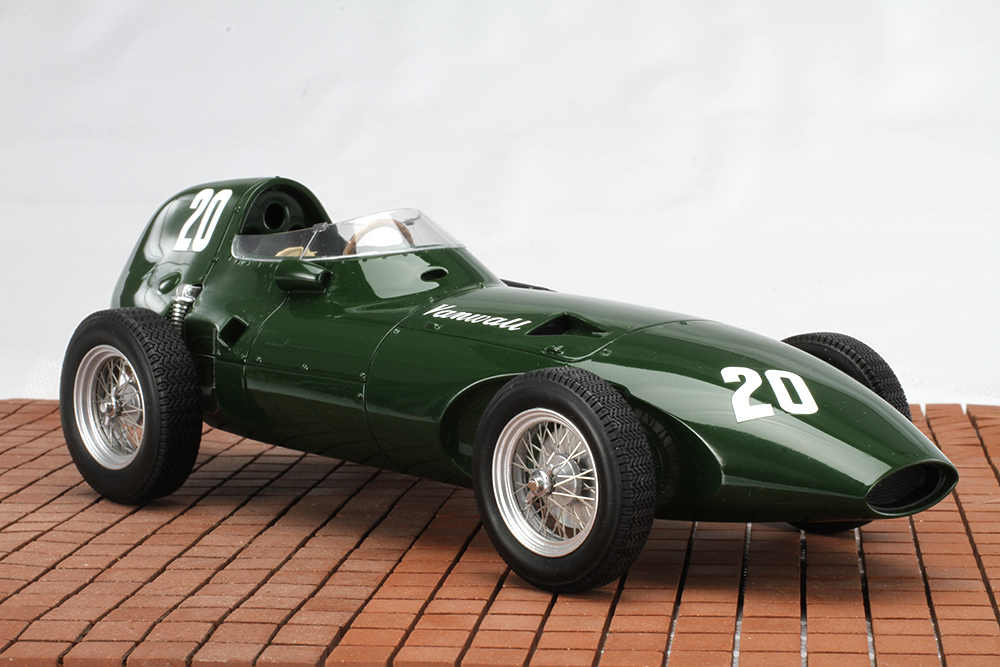