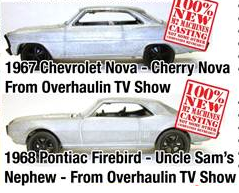 Richard Mena and the team at M2 Machines were kind enough to share some pre-production images of their latest endeavor.  As a company who redefined the small scale diecast market the question became how do they top what they already accomplished?  The answer – partner with one of the world most respected craftsman in the full scale automotive industry; Chip Foose. That’s right – under development now, the first release of M2 Foose diecast replicas will include some of his most respected creations as well as several vehicles from the “Overhaulin” television show.  Expected to be available spring 2013, enjoy this early first look for what’s to come.