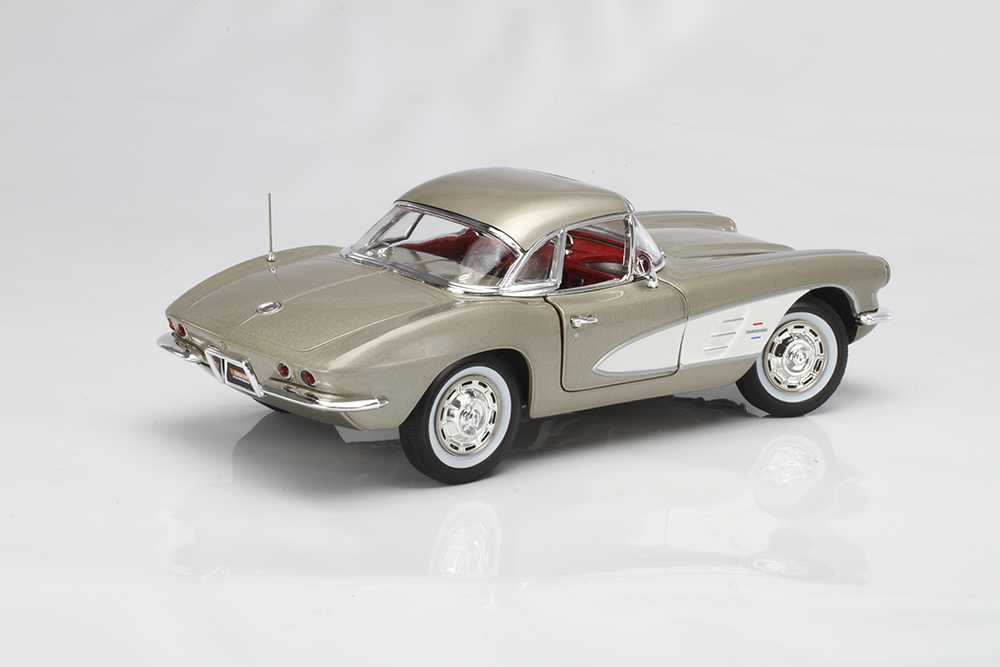 Though few fans knew it at the time, when Chevrolet pulled the wraps off the 1961 Corvette with its thoroughly redesigned squared off tail section and four round taillights, they were getting a first look at design language that would define America’s sports car decades to follow.  The look was the vision of Bill Mitchell, the Harley Earl protégé that had stepped into the role of GM Design Chief upon Earl’s retirement in 1958. Mitchell and his team had actually first experimented with a square tail—sometimes called a boat-tail or duck-tail—on the Vette when developing the 1960 Stingray Concept, which in turn had been based on the 1957 Corvette SS experimental racer. The smooth rear deck and more angular corners were both aerodynamically superior and gave the Corvette more of a family resemblance to other Chevy vehicles, which was thought to be a good thing. 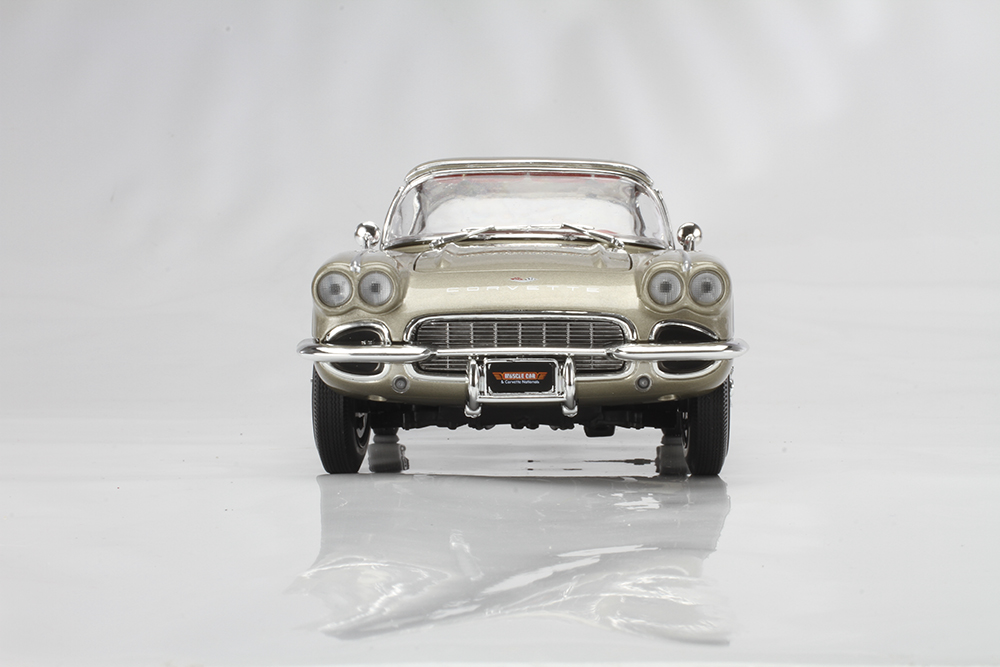 While the 1961 model was the beginning for the square deck and quad taillights, it also represented the end for a couple other Corvette features. Most notably, this would be the final year for contrasting paint colors in the coves in the flanks, which had been a stylish signature since 1956. It was also the final year for dual quad carburetors, the Rochester fuel injection option having made them largely irrelevant as a performance upgrade. Auto World’s model is patterned after Roger Schmidt’s ’61 hardtop that was featured at the 2017 Muscle Car and Corvette Nationals event held in Chicago each fall. Auto World has done a number of MCACN award winners, and this car comes with special MCACN box graphics and is limited to just 1002 pieces. That will make its production almost triple the just 358 Vettes in Fawn Beige with White coves that were built in ’61! The paint looks great on this example, and the trim is mostly separately molded pieces, but the trim bordering the coves is painted-on. The casting captures the shape of the square tail nicely. The only exterior hiccup is the stance; it sits very high on its suspension and the wheels and tires look a touch too large in diameter to boot. 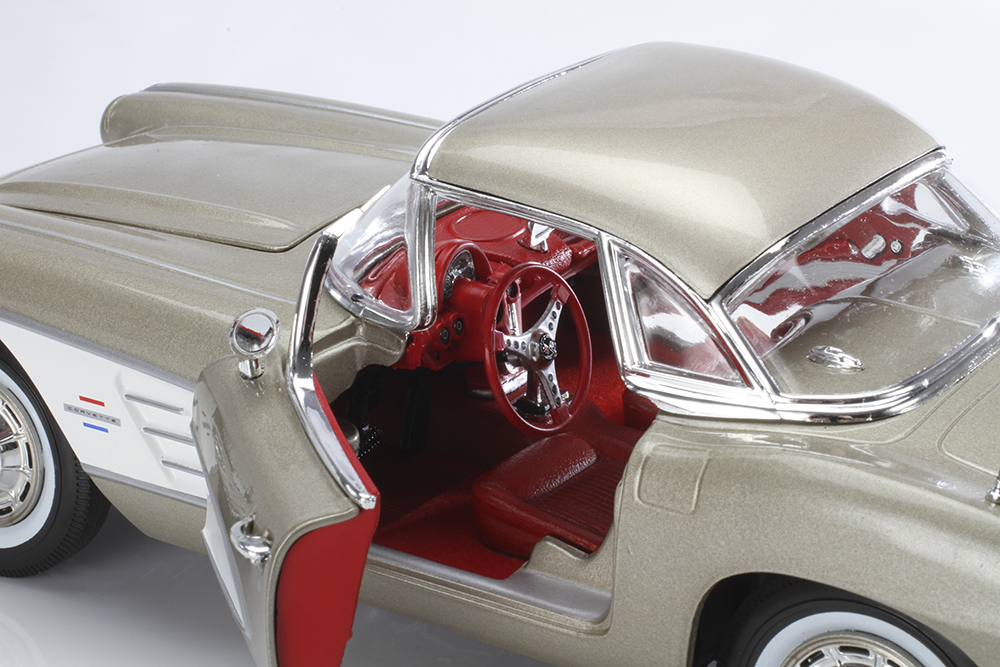 The model has the correct factory hardtop and a red vinyl interior too. There is shallow flocking in the foot wells and nice chrome trim on the dash. They even got the year-specific colored bars above and below the ‘Corvette’ script the on the passenger’s side trim panel. Schmidt’s car features the base 235-horse single 4-barrel 283 V8 backed by a 4-speed. This is the one area that the model departs from the original. It has a carbureted 283 and a 4-speed, but the three telltale divots in the top of the air cleaner and the raised edges of the intake manifold reveal this to be a dual-quad setup. It’s a very minor difference, and actually the 2x4bbl setup is more appealing than the base motor so its not really a problem. 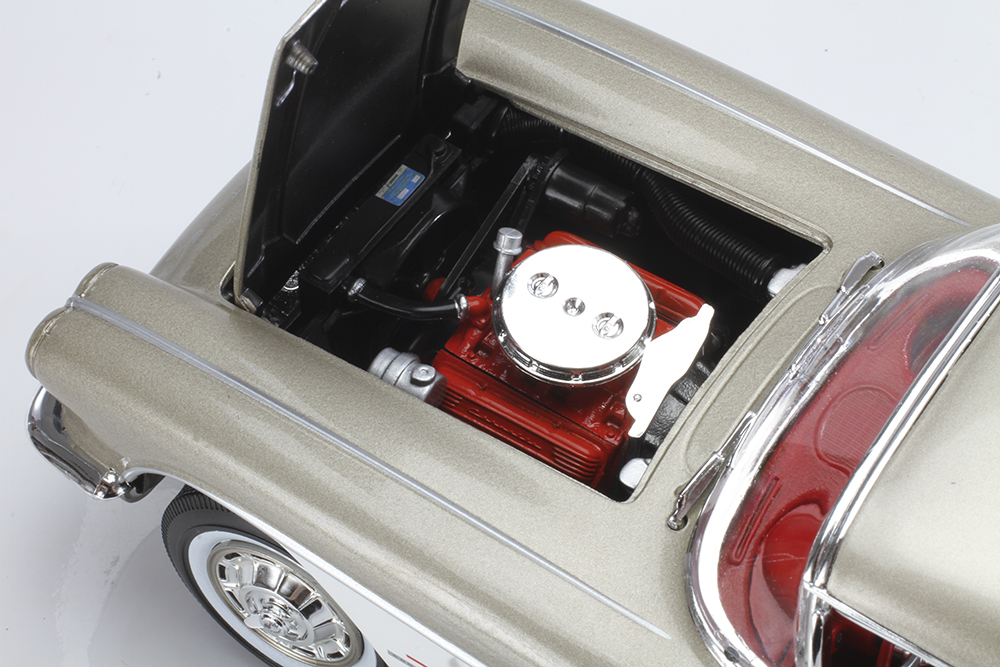 1961 Represents a high-water mark for the first-generation Vette, both stylistically and in terms of performance, retaining the best of the old (2-tone coves and dual quads) for one last year while bringing in the best of the new in the form of the square tail and four taillights. The Fawn Beige is pretty classy too. That makes this MCACN edition worth picking up for your Corvette collection. 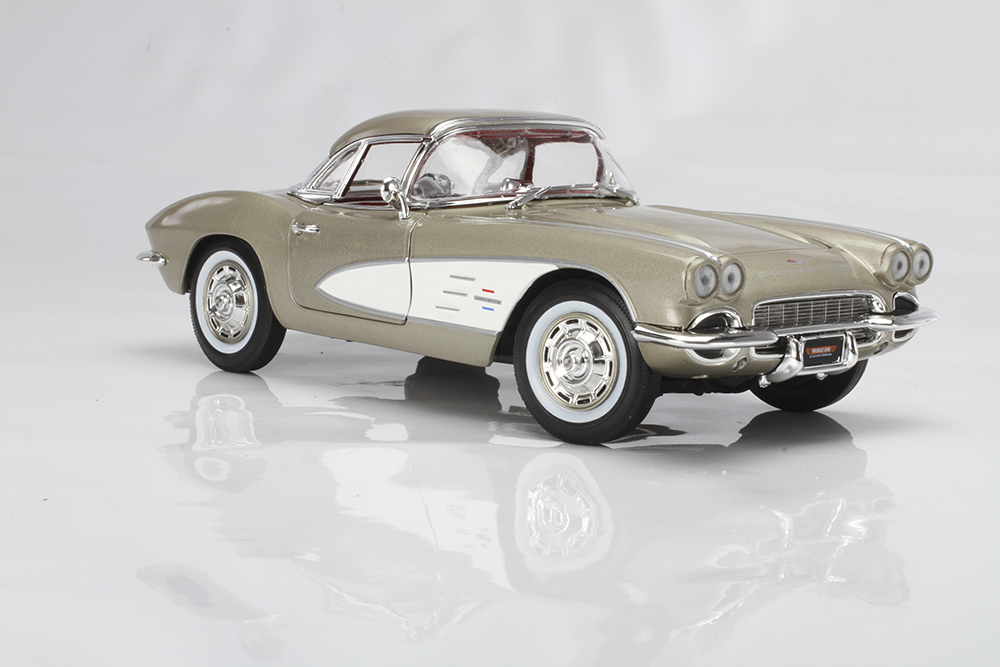