Every car—big or small—has a story. Every car in my diecast collection falls into one of the following categories: cars I owned; cars I wish I owned; or, as in the case of the GTO I call “Evil Twin,” a car made out of leftovers from other projects. But this story really starts with, of all things, a full-size Chevy Nova. In 1972, I had a ’62 Nova “race car” project that wasn’t going the direction I had hoped. One day, while cruising by the local Ford dealer’s used-car lot, I noticed a really clean Cameo Ivory ’66 GTO sitting in the back row. It didn’t have a dent or scratch on it and had only 35K miles, but an aggressive test drive had resulted in a seriously spun rod bearing. Well, $600 and a log chain got it from that lot down to the Standard service station where I worked at the time. I pulled the 327 out of my Nova, swapped the dual-quad tunnel-ram race manifold for a more streetable Offenhauser single-quad hi-rise, and dropped it in place of the broken 389. It turned out to be one of the nicest, best-handling cars I have ever owned.

Forty-some years later, that GTO was long gone but certainly not forgotten. In my conscious decision to attempt to collect replicas of cars that meant something to me, I had picked up a Cameo Ivory ’66 GTO from Ertl, but upon receiving it, I was a bit disappointed with the detail and so was not motivated to make it into a replica of “my” ’66 GTO. In the meantime, Highway 61 had introduced its version of a ’66 GTO, which was much more detailed. The company eventually produced a white one, but it had a red interior (mine was black). I could fix that! I bought a second triple-black version and swapped interiors. I removed the Tri-Power 389 and scrounged a detailed small-block Chevy to replicate the 327. I added a set of dark-center mags to finish off the look. Meanwhile, the Ertl GTO had surrendered its interior for another project, so I had a body and chassis just lying there. So I thought, “Why not do a quick build and make a radical street racer?” That’s how the “Evil Twin” was born. 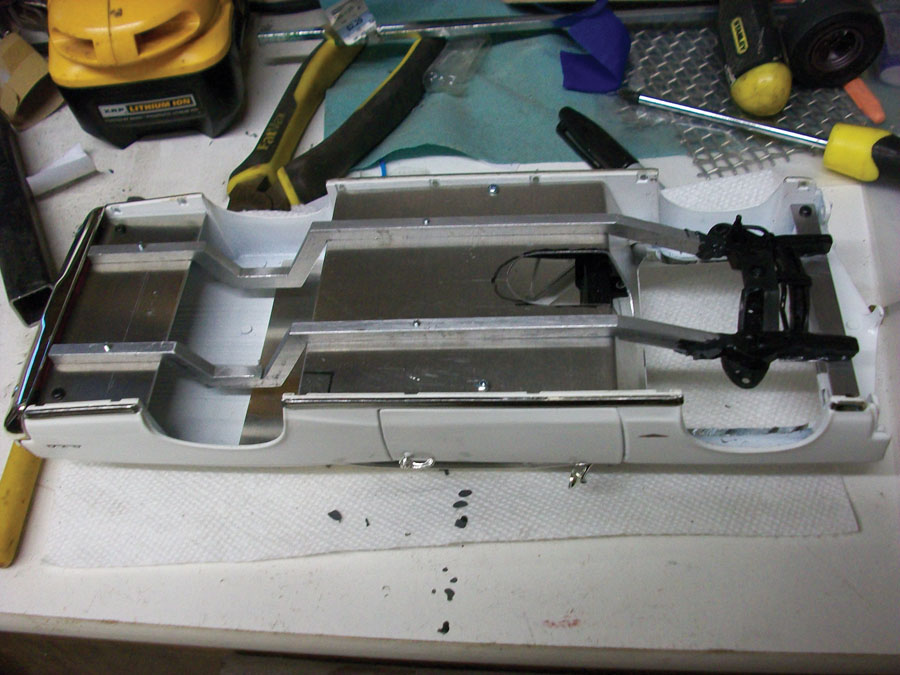 I machined all the surfaces of the hand-cut frame rails and sized them to correspond to 2×4-inch rectangular tubing. I attached them to the floor pan and added a trunk pan. 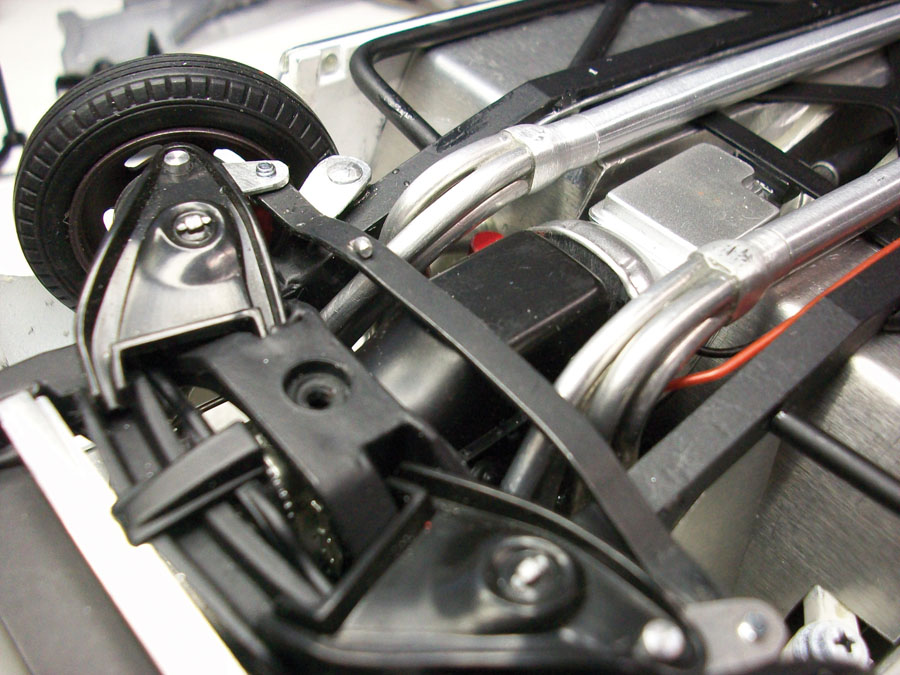 I scrounged a Camaro subframe left over from a Highway 61 car. The spindles were sloppy and didn’t work for the required height, so I machined new ones out of 3/16-inch aluminum rod and added disc brakes made out of 3/4-inch aluminum rod. 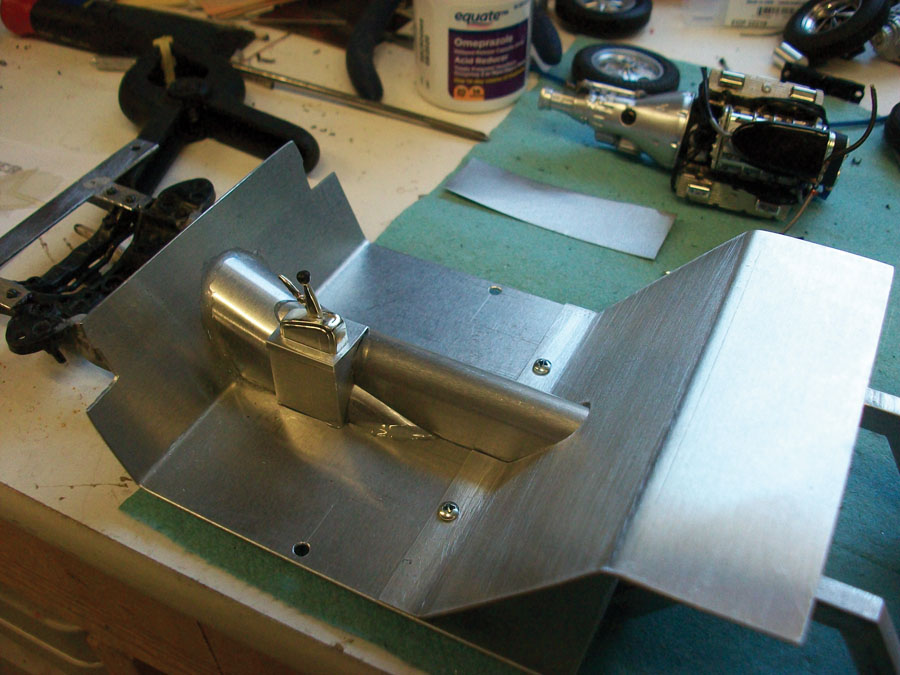 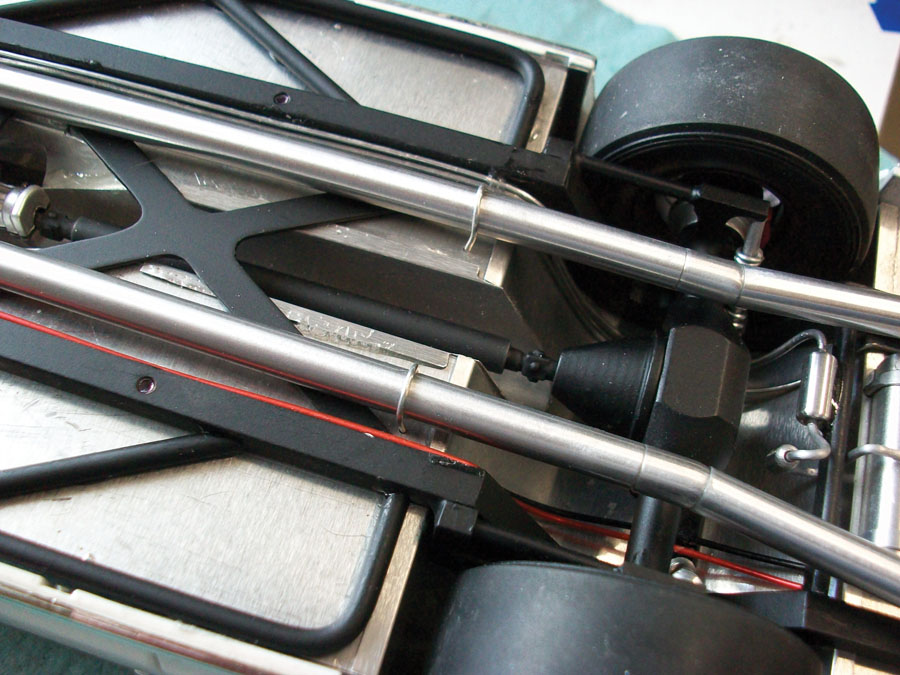 What was supposed to be a “quick build” soon turned into something else. If this were going to be a serious drag car, it would need to be tubbed. The stock plastic chassis was not going to lend itself to that, so I decided to build a set of frame rails from some 3/16-inch aluminum sheet. Front-suspension pieces came from a Highway 61 Camaro, but I didn’t like the loose spindles, so I made some new ones from 1/4-inch aluminum rod along with some disc brakes to fit the wheels from GMP. The rear suspension and diff were built from scratch—a fabricated Ford 9-inch with a 4-link and coil-over shocks—all from aluminum. As a serious street racer, it needed an all-aluminum interior, too. The floor, tunnel, dash, seats, pedals, steering wheel, and roll bars are all fabricated out of aluminum. I added some belts to finish off the interior. The engine of choice was a blown big-block Chevy from GMP. I added a Turbo-Hydramatic transmission and built my own distributor, rewired with the correct firing order. I didn’t want this to be a normal blower-through-the-hood build, so I had to remove the blower scoop. The injector under it didn’t look good, so I built a new set of injectors, complete with brass butterflies. I built a set of headers out of aluminum wire to fit with machined collectors mated to a rendition of a full-length 4-inch exhaust. I built an electric water pump and plumbed it into a handmade aluminum radiator. 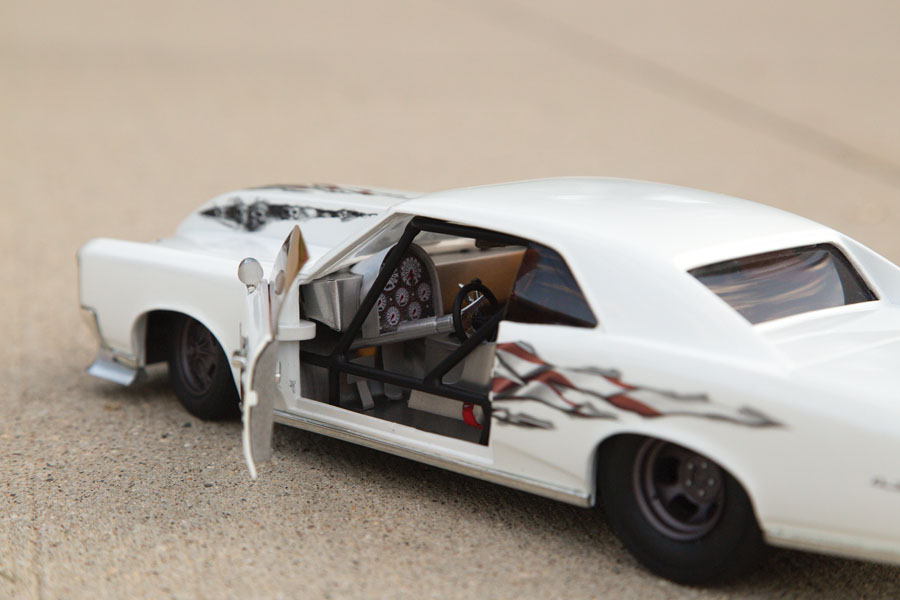 I fabricated a fuel cell with strap mounts along with a fuel pump, lines, and a filter—all from aluminum.The 4-inch exhaust has minimal resonators and hangers and handmade headers. 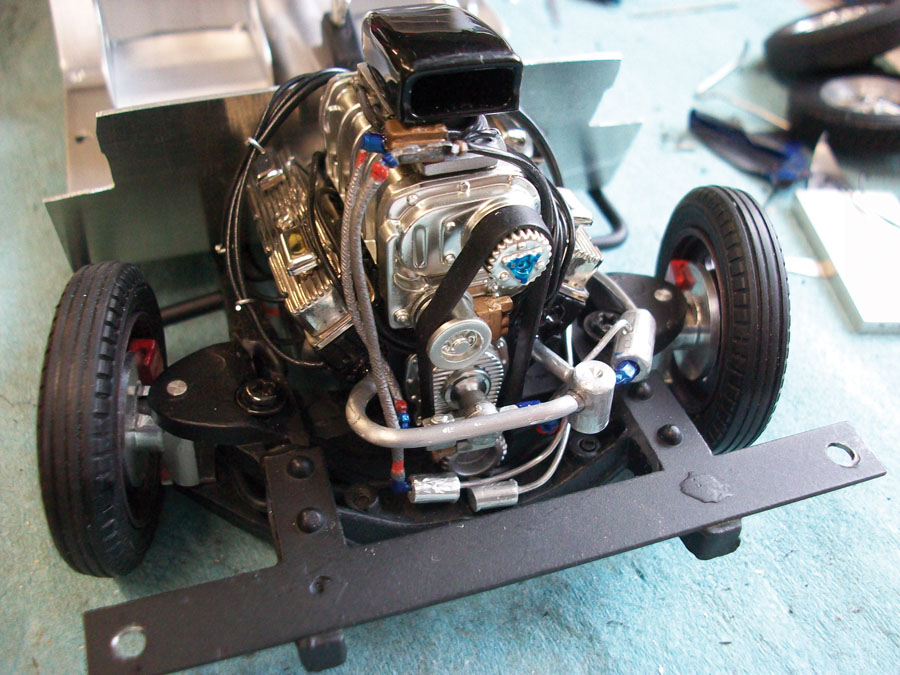 Here, you can see the fuel lines to motor and water lines with the electric pump 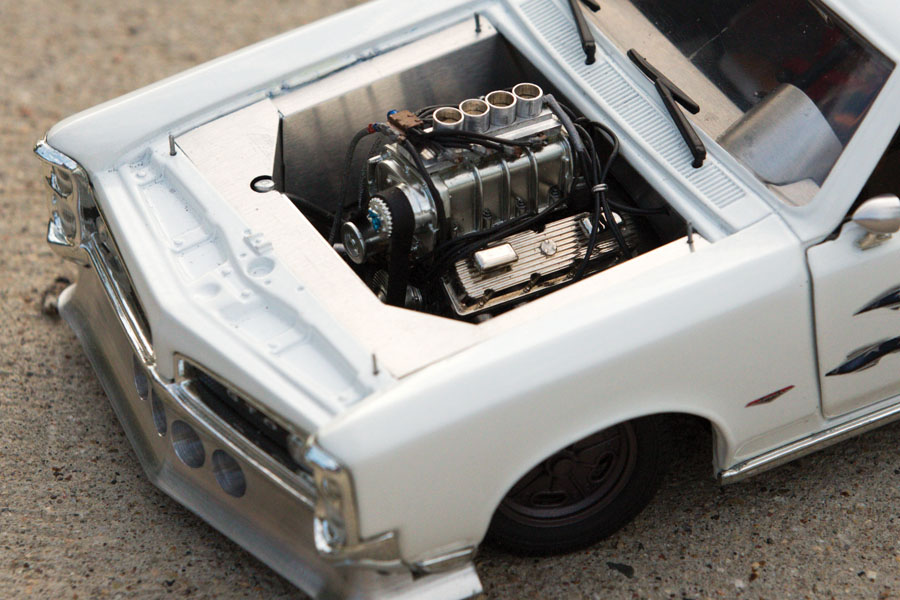 Here, you can see and the handmade aluminum injector unit 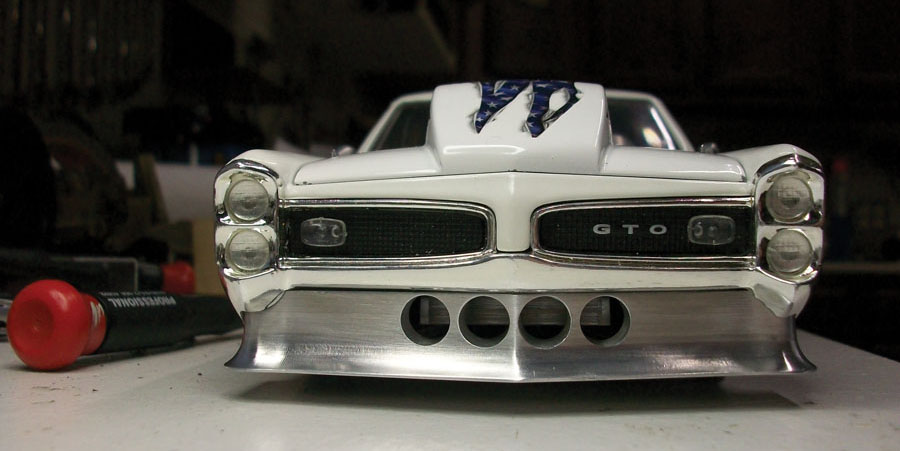 I added a machined aluminum air dam to give the Evil Twin GTO a lower stance and a more sinister look.

For the exterior, the blower required a scoop, so I built one from aluminum plate. The front of the car just didn’t look sinister enough, so I modified the front bumper and added a machined-aluminum air dam. The Ertl body didn’t come with any side glass, and I decided if I were going to take the time to make side glass, it should be tinted. To be different, I cut up an old plastic whiskey bottle with a yellowish tint and made the side and back glass from it. With roughly 260 hours into this build, I didn’t want it to be plain white on the shelf, so I contacted a fellow customizer to help design and produce the graphics for the exterior to give it “the look.” With that, what started as leftover parts became a radical race car and a fun counterpart to my replica street GTO.