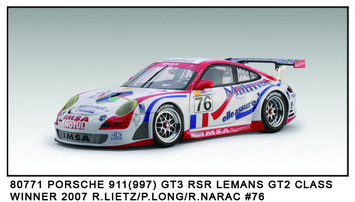 The Porsche 911 — in its various incarnations and evolutions — is the winningest single model in racing history, and second place is so far back it doesn’t even show  up in the rear-view mirror. Among its most recent accomplishments was a victory at the 2007 24 Hours of Le Mans in the GT2 class. AUTOart has just released a 1:18 diecast of the winning no. 76 car utilizing their excellent 911 GT3 RSR casting.

Also just released is an all-black GT3 RSR representing Porsche’s customer-racing program. Privateer teams are the backbone of Porsche’s racing program, and this model is an excellent example of the car virtually any customer can buy, race and win with.