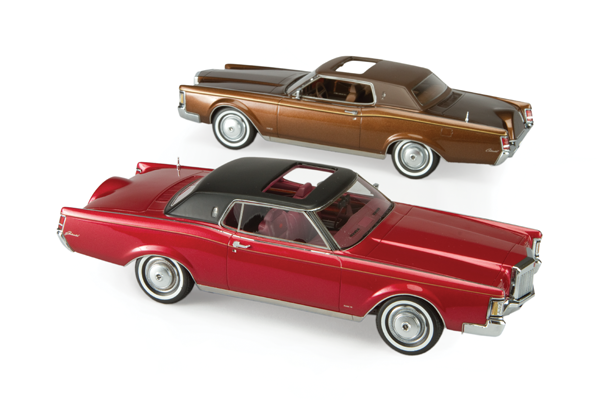 Henry Ford II was nothing, if not confident. It must have been in his blood. His grandfather had started the company, and his late dad, Edsel, was a legend among designers. Henry II was married three times, didn’t think twice about acting once, and had taken the family business public in 1956 — only to blow a sizeable amount of it two years later on an ill-fated car bearing his father’s name. There was more good than bad; truth be told, the eldest son of Henry Ford’s only child did some remarkable things in his tenure as the head honcho, major-domo, and seated King of the Realm at FoMoCo. It was HF II who’d green-lighted the Mustang. It was he, Hank the Deuce (to his closest friends, or underlings who were well out of earshot), who had courted Enzo Ferrari and then turned the tables on the recalcitrant fellow emperor on the race tracks of the world. And it was he who decreed that the new Lincoln Continental Mark that was being finalized in his studios in 1966 was going to be called the Mark III.

While not as earth-shattering as corporate stock sales (or rubbing mercurial Italians the wrong way), this flew in the face of the correct order of ascendance. In 1958, there’d already been a Mark III, which was a giant, garish automobile that Henry had hated. But Henry Ford the Second was never one to let mere numbers get in the way of a gut feeling — or an opinion. He simply announced that those 1958-60 Lincolns were not “true” Continentals, and were, therefore, null, void, and bereft of their place in the lineage of the marque. This meant that the new car, of which he was well pleased, would carry the mantle of the Continental Division last upheld, and regally, by the 1956-57 Lincoln Mark II. 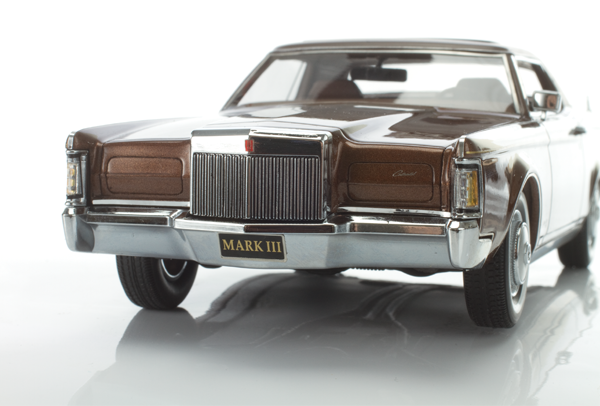 It was an outrageous — and truly inspired — call from a passionate and intelligent man who’d made dozens of them. The new Mark III was a handsome car, designed from the beginning by Ford’s Gene Bordinat and Buzz Grisinger and their crew of merry clayslingers to carry the general proportions and overall prestige of the Mark II, a stylistic and marketing coup (if not sales success) that had redefined the Lincoln name in the postwar era. The Mark II’s success was mostly credited to its graceful reflection on its 40s-era namesake; subdued, refined, and stately, the 50s Mark had taken the original 1941-1948 Continental’s sweeping style and made it both contemporary and timeless. It was powerful with its long hood and short trunk, and unmistakably Lincoln in its elegance and relatively unadorned poise. Henry II’s dad Edsel had created the first Continental after a pre-war trip to Europe had filled his head with “continental” styling ideas; it’s entirely possible that the younger Ford saw the new car — slated for production in 1968 — as the chance to honor his father’s vision with one of his own.

Like that older car, this one would be powerful; a new 460cid V8 — a stroked 429 with 10.5:1 compression — would debut under its six-foot-plus hood, making 365 horsepower and a thundering 500 pound/foot of torque, parked in a slightly modified Thunderbird frame with a 117.2-inch wheelbase (a full nine inches shorter than the Mark II’s). Its length would be the equal of its cross-town (and front-drive) rival, the Cadillac Eldorado, which had more gee-whiz tech on tap. That didn’t stop Lincoln from selling almost as many Mark IIIs as Cadillac sold Eldos — a remarkable feat, since overall Lincoln sales were never in the same class as Cadillac’s. The Caddy was space-aged; the Lincoln was old money. The Cadillac was thrilling; the Lincoln whispered grace and substance — even if it copped a little style from another car known for gravitas: Rolls-Royce. According to historians Mike Lamm and Dave Holls, it was Lee Iacocca, during a restless night’s sleep, who envisioned a Rolls grille on a Thunderbird, and phoned his top designers to make it so. Of course, that didn’t happen; Lincoln got the piece, and it set the tone for a classic style that didn’t change much for 1970 or 1971. It didn’t need to. 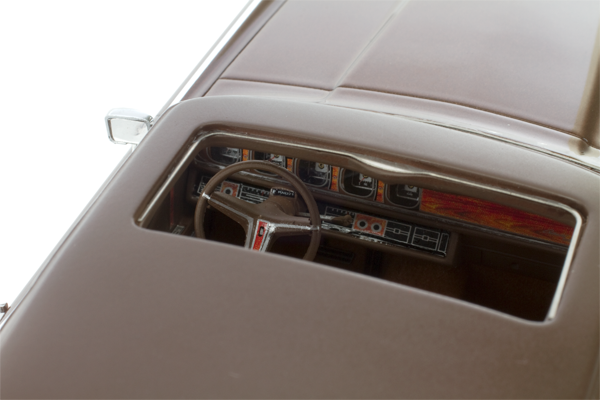 If there’s a parallel to old Hank in the scale auto universe, then James Cowen is it. His Automodello line has been a passion and source of pride for Jim and the collectors who have snatched his product up for the better part of the last half decade, and his vision has carried the maker into rare hobby-business territory: a startup that is thriving. This pair of Lincoln Mark IIIs came, as all of Cowen’s cars do, in elegant black boxes with sturdy black outer sleeves; these are extremely heavy, thanks to the overall mass of the models within — and that makes for an expectation that’s not dulled, not one bit, by what’s inside. We tilted the box tops open, removed the side pieces that keep the plinths locked down for transport, and pulled up on the sateen ribbons that run beneath each base, and suddenly, we were face to face with as exquisite a set of personal luxury cars in scale as we’ve ever seen.

We got two samples for review: one, in Ginger Bronze Moondust — one of the many “Moondust” colors in the catalog during those Apollo days — is from the “Tribute” edition; only 171 will be made. The other arrived in Red Moondust, and there will be “up to” 499 of these built. A third run of 50 pieces made up the “Homage” edition — and they’re gone, baby. Credit the exclusivity of the paint — black on black with a tan interior — and Cowen’s horse sense about what collectors want.

From every aspect, angle, and view, these cars look exactly right from their neo-classical grilles to the “Continental Hump” on the trunk. Deeply chromed resin bumpers are hung at either end, and above them, clear lenses — yellow and clear side markers at the front fenders’ leading edges, and beautiful red resin units at the rear — sit in the castings tightly and cleanly. There isn’t a bit of trim on the car that’s been cheat-sheeted; everything has been done in plated parts, foil appliqués, and wonderful, dead-even chrome metal tape of various — and, it seems, correct — widths. It’s hard to pick a favorite color between the two; the red car has a lipstick-colored interior and the ginger variant has a tobacco brown cabin. Both stand at just the right height on outstanding whitewall tires with perfect chromed wheel discs, and each wears a beautiful contrasting pinstripe along the break lines on each side of the body. Wow, and wow. 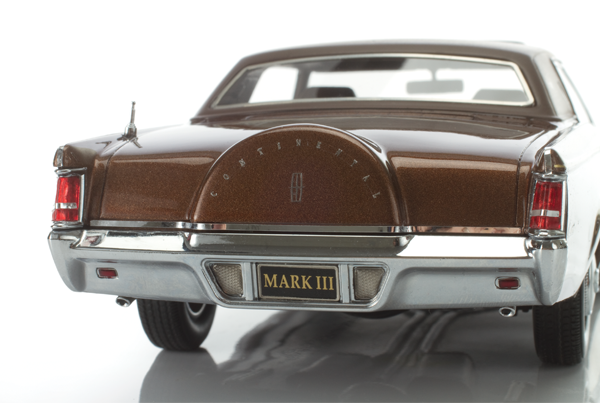 The smaller trim, which is so important on a scale car, is lovely — from the “Continental” script on the driver’s side headlight door, to the Continental Star set into a recess on the car’s roof, to the incredible — and impeccable — “C-O-N-T-I-N-E-N-T-A-L” that arcs on the spare tire hump out back. Another set of scripts are set just before the ends of each rear fender, and there are “Mark III” markers behind each front wheel well. They haven’t missed a trick. Kudos to Automodello, super-designer Raffi Minassian, and to those who do the building for the company. This is top-shelf stuff.

So is the scaled-down interior, made all the easier to see thanks to a removable moon roof and a thoughtfully rolled-down driver’s side window. The castings are sharp, and well-decorated; the decals for the dash controls and vents aren’t exactly state of the art, but they do the job. We liked the deeply relief-cast door panels and seats, the wood grain on the dash, the inset, readable gauges, and the moderately well-detailed chassis below.

‘60’s and ‘70s personal luxury cars are something that a lot of collectors have wanted to include on their shelves for years, but tooling costs and the vagaries of the die cast market made it a tough sell to the makers. Resin, and the opportunity to cater to smaller groups of dedicated buyers, make the argument easy for a series of these now-or-near classic American automobiles in 1:24. We’ll see if there’s an Eldorado, or a Thunderbird (or, if the deities of mold making are truly tuned in, a mid-’sixties Coupe deVille or two) in our future. If there’s one thing that Henry Ford II – and his scale car counterpart – have proven, it’s that one man can make a company. Very highest recommendation.