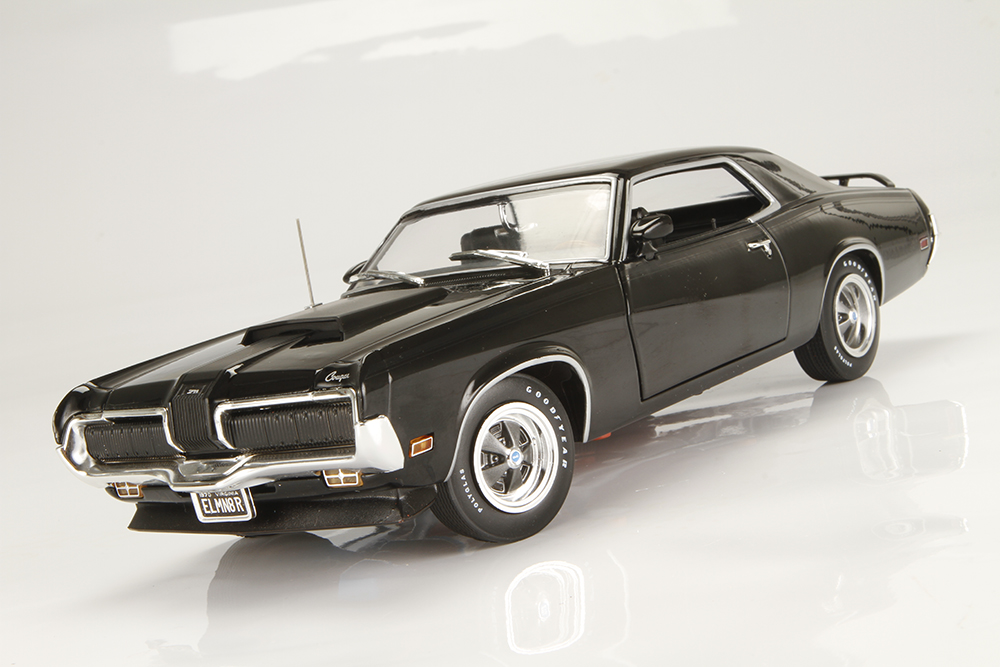 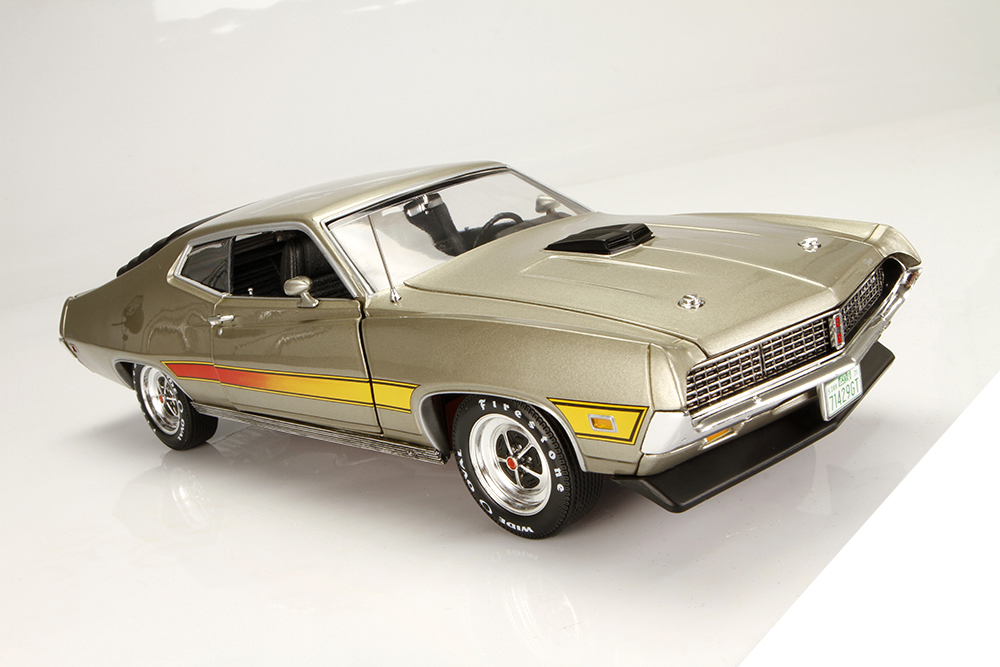 Ford had the pony car segment covered with its industry-defining Mustang, but in other muscle car classes it battled for market share. Mercury was positioned as the mid-priced option in the Dearborn stable—more mature and upscale than Ford, but more youthful and energetic than Lincoln. With Mustangs flying out the door in record numbers Mercury sought to capture a piece of the action, launching the Cougar in 1967 to coincide with the Mustang’s first refresh. For 1970 the Cougar got a mild facelift, but the big news was under the hood where the full complement of Mustang V8s was made available to Cougar buyers. On the Blue Oval side, Ford sought to take a larger chunk of the traditional intermediate-size muscle market above the Mustang being dominated by GM and Chrysler products by updating its Fairlane with an even more aggressively raked fastback for 1970-71 to help it on NASCAR’s superspeedways—and, it was hoped, on showroom floors. Auto World has updated its American Muscle 1:18 castings for the Cougar and Torino and has released two interesting larger, more luxurious muscle car models. Let’s take a look.

Although the Cougar shared almost all its major mechanicals with the Mustang, it rode on a more luxurious 111-inch wheelbase (3 inches longer than a Mustang.)  More luxurious, yes, but Mercury still had sporting intentions, and made most of the Mustang’s powertrain options available in the Cougar. For 1970 that meant a quartet of V8s. Standard was the 250hp 351 Windsor, but for the first time it was joined by a big-valve 351 Cleveland sporting 300hp. Quarter mile warriors could opt for the 428 Cobra Jet big block, but the rarest, most interesting, and—depending on your tastes—potentially the most desirable was the high-winding little Boss 302. The vast majority of Boss motors were delivered between the fenders of Mustangs, but Ford needed to sell enough to ensure it was legally homologated for Trans-Am competition according to SCCA rules, so 469 Cougars left the Dearborn, Michigan Assembly Plant with Boss 302 power. It was available only with the Eliminator package, and only as a hardtop with a Toploader 4-speed (both wide and close ratios were available.)

In the intermediate class—the heart of the muscle car market—Ford’s Torino went big for 1970: bigger body, bigger motor, bigger graphics, and the options carried over virtually unchanged for 1971. You could get it in several configurations, but the GT was the best blend of sport and luxury, giving you the beefed up suspension of the Cobra and the interior options of the Brougham. The wheelbase was stretched an inch to 117, and the fastback body style from the 1968-69 models was made even more radical, and christened the ‘Sportsroof.’ Most of Ford’s V-8 range was available in the Torino and the GT got the best of them. Standard was a (non-Boss) 210-horse 302, with a pair of 351s—a 240hp Windsor and a 285hp Cleveland—and a pair of 429s optional. 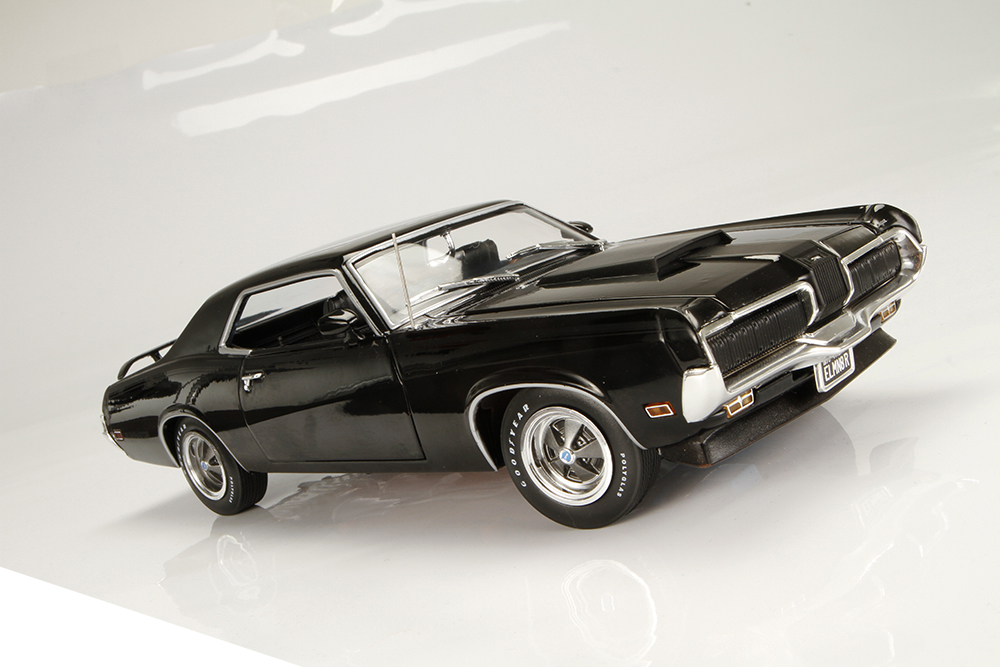 Auto World intensifies the rarity quotient with this triple-black 1970 Boss 302 Eliminator—black paint, black interior, black Eliminator graphics. According to Auto World, Mercury built exactly three Cougars in this configuration. The casting has its roots in the old Ertl American Muscle line, and certain telltale signs—painted on window and wheel arch trim for example—clue you in to that, but the overall shape is faithful to the ’70 Cougar with its plunging character line. The paint is very nice, especially the subtle flat graphics across the rear wing. There’s also flat black in the grille, and with the exception of some clumsy-thick wipers the chrome bits are very nice; just check out the marker lights and parking lights! For 1970 the Cougar got a hood/grille with a little Charlie Chaplin mustache center section, which the model captures nicely. It also got a broader hood scoop that straddles the stripe graphics but the model’s isn’t open. 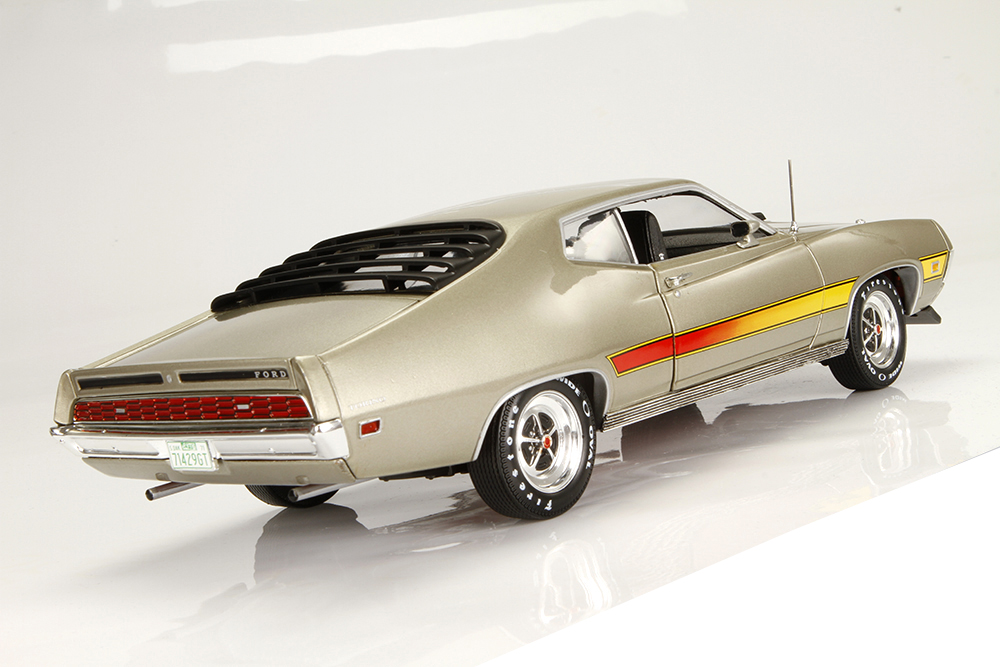 Auto World has updated its Torino casting with a unique combination of features for its 1971 GT. Included is the ’71-specific center vertical-stacked ‘GT’ emblem on the optional hideaway-headlight grille, and a revised chin spoiler. The car is bathed in authentic Light Pewter Metallic with the distinctive yellow-to-red fade stripe down the side, and a groovy set of louvers on the rear window! Like the Cougar, this Torino is an older casting, and there are just a couple of very minor blemishes on the hood and C-pillar where its age reveals itself. As an added bonus this GT comes equipped with a shaker hood—a hint at what lies beneath for those Ford aficionados that know the peculiarities of the 1971 model year. The hood itself has those cool Ford twist-locks, but the fit on the hood could be a bit better. 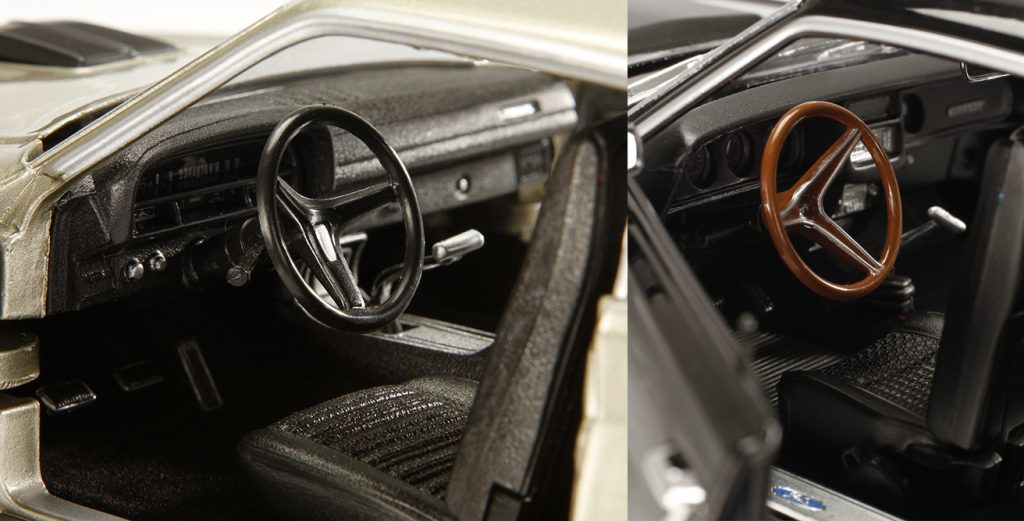 Luxury is relative when you’re talking about classic muscle cars, but the GT delivers the better of the two. The three-spoke rim-blow steering wheels should be the same—literally they use the same wheel—but the Torino’s molding and paint is superior. So too the seats. Both have folding seatbacks, but the Cougar’s sit unrealistically upright, whereas the Torino’s look pretty natural. Both have interiors with black plastic simulating vinyl and black flocking for carpeting, so that’s a toss-up. Dashes are pretty even in terms of detail and instrument legibility, but the Cougar’s is definitely more sporty and attractive. The Torino regains the lead with its painted center console and much cooler Hurst T-handle shifter. The big Ford’s pedals are nicer too.

Both cars have nicely detailed trunks, with full-size spares, and patterned trunk mats; the Torino gets extra points for adding a painted and detailed jack.

When you lift the hood it rises up on some beautiful sprung scissor hinges to reveal a nicely painted and detailed rendition of the Boss 302. It was rated at 290 horsepower—just 10 below the Cleveland—but that figure was at a low (for a Boss) 5800rpm. It is generally accepted that the actual peak power was some 30-40hp (and 1000 revs) north of that. Why the deception? It likely had to do with the Boss’s peaky, somewhat finicky character. With its huge valves and ports the little 302 made its power way up the rev range, but below 5000rpm those big valves were inefficient making the Boss noticeably weak on low end torque. On the street where torque is king, that made the Boss 302 slower than engines with lower—but more useable—power. The Cleveland was better for the street so Ford rated it 10hp higher to draw the attention of the aspiring stoplight heroes, but for road racers the 302 was boss. 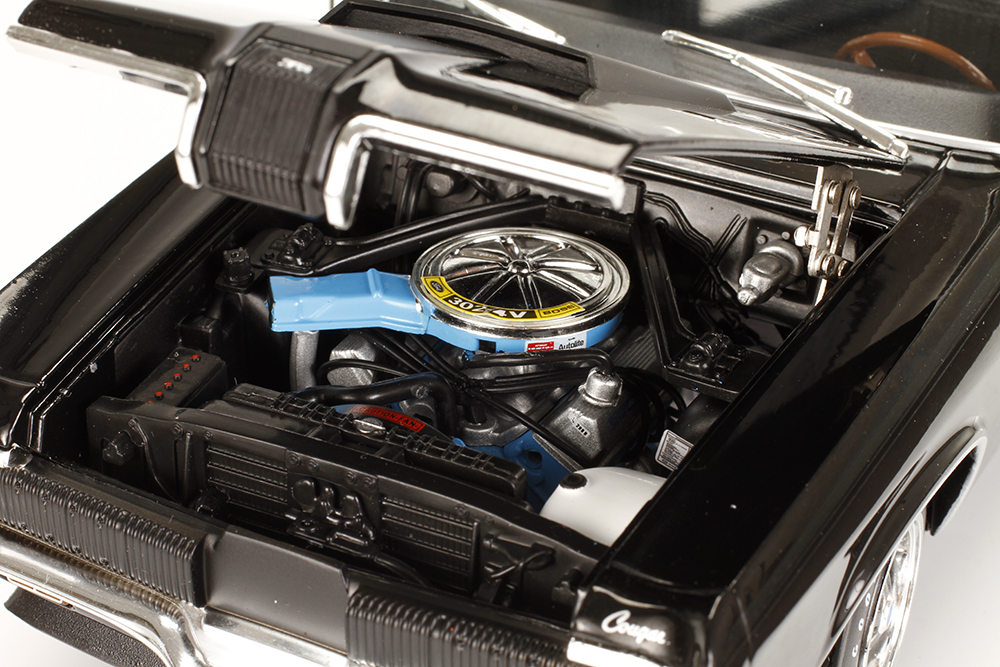 So too for collectors, and Auto World’s Boss has some nice features. The raw metal intake manifold and valve covers are excellent. There are plug wires, radiator and heater hoses, and even a line from the breather into the air cleaner. The warning labels and decals add nice depth, but the one on the air cleaner is a bit too large, and so it sits in the wrong place on the chrome lid. Also too large is the engine itself. On the real car the air cleaner diameter stretches nearly to the outer edge of the valve covers, whereas on the model it doesn’t even reach the inside edge. The block size is perfect for a 428 CJ—perhaps Auto World re-used a 428 mold and simply swapped on Boss 302 valve covers? Many collectors may not notice—or care—but I’d like to see a smaller-block small block.

The shaker scoop poking through the Torino’s hood denotes ram-air that could be ordered on the 351 Cleveland or either of the 429s. The 429 Cobra Jet had 2-bolt mains, cast pistons, hydraulic lifters, and a Rochester carb and was rated at 370hp—but pulled a lot stronger than that. Picking the Drag Package automatically upgraded you to a Super Cobra Jet, which swapped in 4-bolt mains, forged pistons, an aggressive solid-lifter cam and a Holley carb on a special intake manifold—a combo that was laughably underrated at just five extra horsepower! (The reality was more like 25-30.) 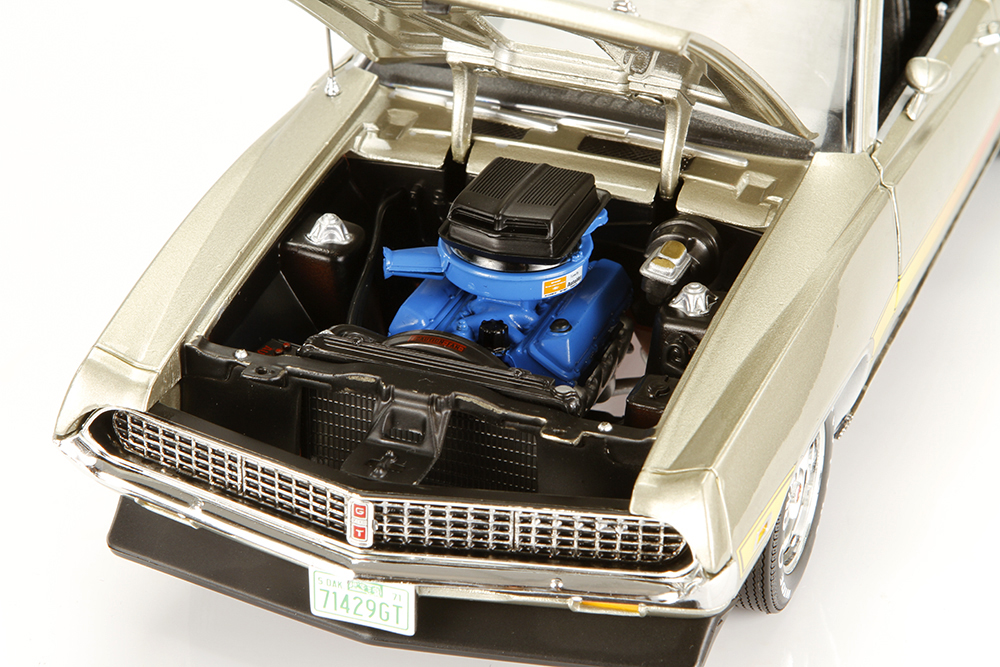 Raising the hood on the Auto World Torino GT reveals a 429, but some collectors may be confused because this motor wears block-colored valve covers. Typically blue valve covers were used on lesser Thunder Jet 429s available on non-GT Torinos, while CJs got finned aluminum covers. It may have been that some CJs left the factory with blue valve covers, but aluminum would remove the ambiguity and definitely help dress up the engine. The block and intake shapes are correct but the motor looks small—and in fact it measures 0.2in. narrower than the “little” Boss 302 in the Cougar. The Autolite battery is better than the Cougar’s and there are accurately molded hoses for the radiator and heater. The ram-air scoop is definitely a draw, but the lack of plug wires, the old-school hinges, and the less paint detail on small items like fluid reservoirs cede the engine compartment victory to the Cougar here.

Flip the cars over to see a lively burst of color. A brick-red covers most of the chassis on both cars, except for stripes of body-color overspray along the edges. These cars both now come in vacuum-molded packaging, but there are vestigial screw mounts from back when earlier versions came affixed to baseplates. There is nice paintwork on the fully molded dual exhaust system on both as well. The front suspension subframes and rear axles—though well molded—make due with unpainted black plastic. Better are the wheels. 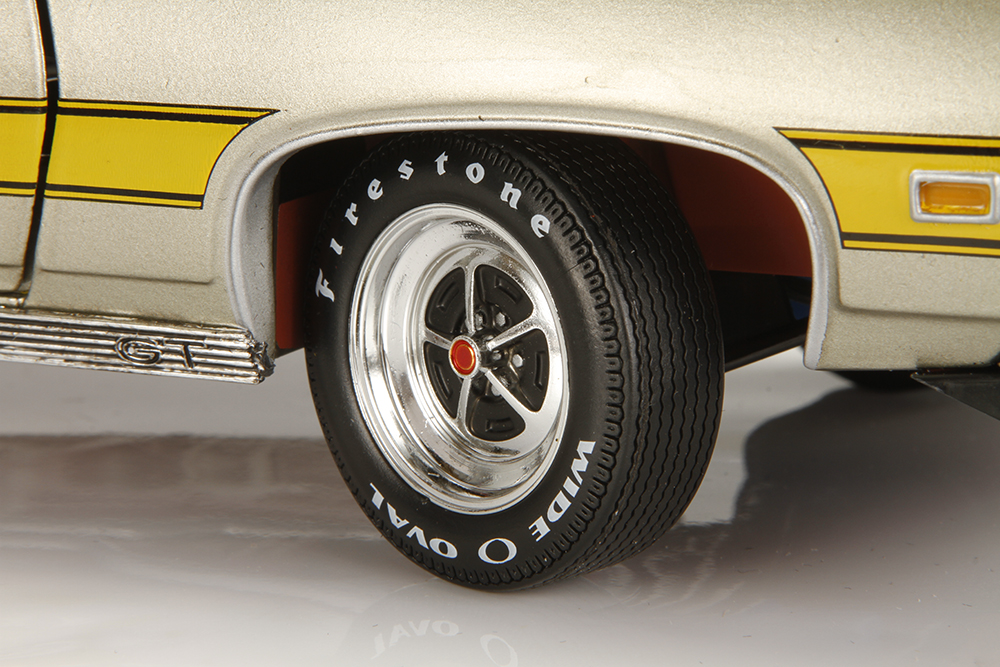 The Torino wears the optional Magnum 500 chrome wheels that were seemingly available on every muscle car of the period from any of the Big Three. The Cougar wears something more unique: the styled steel 14x7s that were optional on any Cougar in 1970 have been painted with the proper Argent centers inside a chrome outer ring, and there is even a blue center cap with a Cougar emblem. I give the nod to the Merc for originality, although both wheel sets present very well. 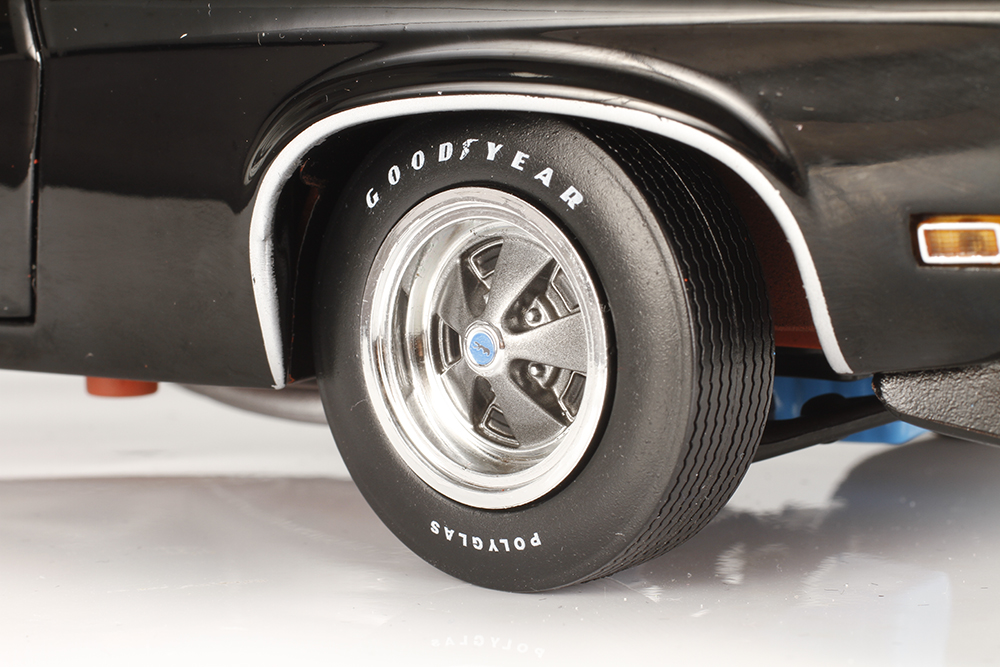 Which of these cars appeals to you more probably comes down to personal taste—there isn’t much to separate them quality-wise. The Torino is the more showy of the two, and likely the faster as well—at least in a straight line. With its Mustang underpinnings and 500 fewer pounds to lug around, the Cougar’s agility and high-winding Boss 302 would eat the Torino’s lunch on any twisty road. For me, the comparative rarity, the extra engine detail, and a slightly better exterior finish put the Boss Eliminator Merc ahead by a nose. But really both of these models bring refreshing new life to veteran castings and Ford fans can’t go wrong with either choice.