Loftiest of the High Rollers

Last year I reviewed Kyosho’s Rolls-Royce Phantom Coupé, and just last issue I examined their Bentley Mulsanne Speed—exquisite 1:18 models of two of the most extravagant, exclusive conveyances known to man (or at least a very few, very rich men—and women—for whom these scions of British luxury are within economic reach.) If one were to mix the genes of the two, then add another couple links in the DNA chain, you’d end up with something like the Phantom Extended Wheelbase (EWB) Sedan. Kyosho has just released it in 1:18, and if anything it is even more impressive—and just more period—than its siblings. This is one immense model. No, really. It is more than 13.3 inches long (within an inch of the length of a 1:12 Mercedes 300 SL I have sitting on my desk!) Translated to full scale, that puts the Phantom within a whisker of 20 feet long! (Lucky then most Phantom owners have large garages.) The additional length—about 10 inches of it—is inserted predictably in the rear seat area, which also extends the rear ‘coach doors’ (we daren’t call them ‘suicide doors’—life is good when you’re in a Rolls!). The midriff area is certainly long, but given the huge proportions of the rest of the car it doesn’t have that full stretch limo look, despite its 150+inch wheelbase. The towering roofline helps in this regard—this sedan comfortably overlooks some crossover SUVs. At better than 6000 pounds it handily outweighs them as well. It outmuscles most of them with its 453hp 6.75L V12 (the BMW-built mill that has powered all Phantom models since its 2003 introduction.) 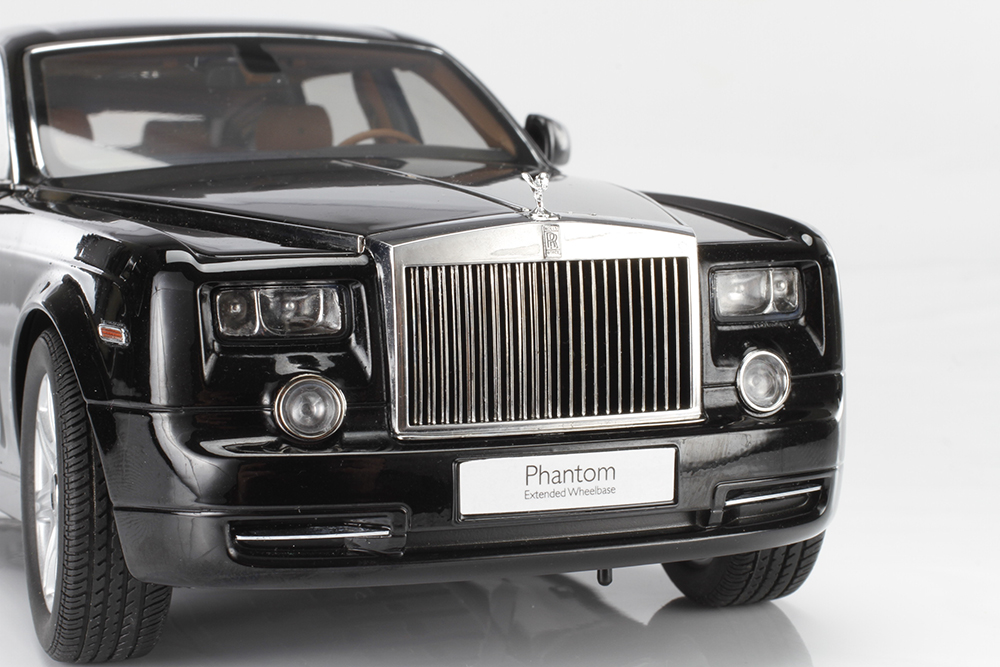 Like the previous Coupé, this EWB Sedan represents a later Series I Phantom—after the 2009 facelift, but before the 2013 model year Series II introduction. You can tell that by the front fascia; for 2009 the front bumper was smoothed into the body and the grille made shallower to bring the sedan into line stylistically with the Coupé models. But this car still has the round driving lamps on the lower front fascia, which were phased out with the Series II. Kyosho captures all of this beautifully. Kyosho offers the model in just a few of the estimated 44,000 colors real Phantoms are offered in. (Hey, when your car costs north of $480,000 on average, they’ll paint it pretty much any color you want…or invent you a new one!) This one is Diamond Black—a properly limo-ish hue for a long-wheelbase Roller. The tiny grains of metalflake only really shine under direct light, which is true of the real car as well. It is formal, and classy and expertly applied, and contrasts nicely with the individually cast and polished chrome trim at the window surrounds, door handles, and of course the signature RR upright grille. 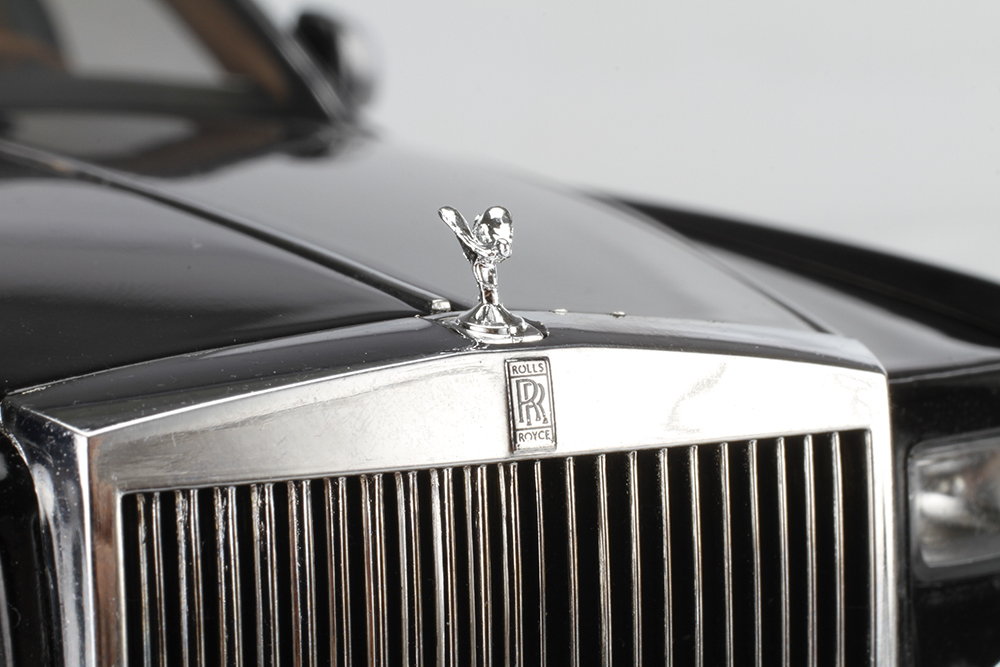 To ensure the Spirit of Ecstasy hood ornament is both accurate and durable, it is molded individually as well, and stashed (with a spare) in the ample, nicely flocked trunk. The side mirrors even fold in. 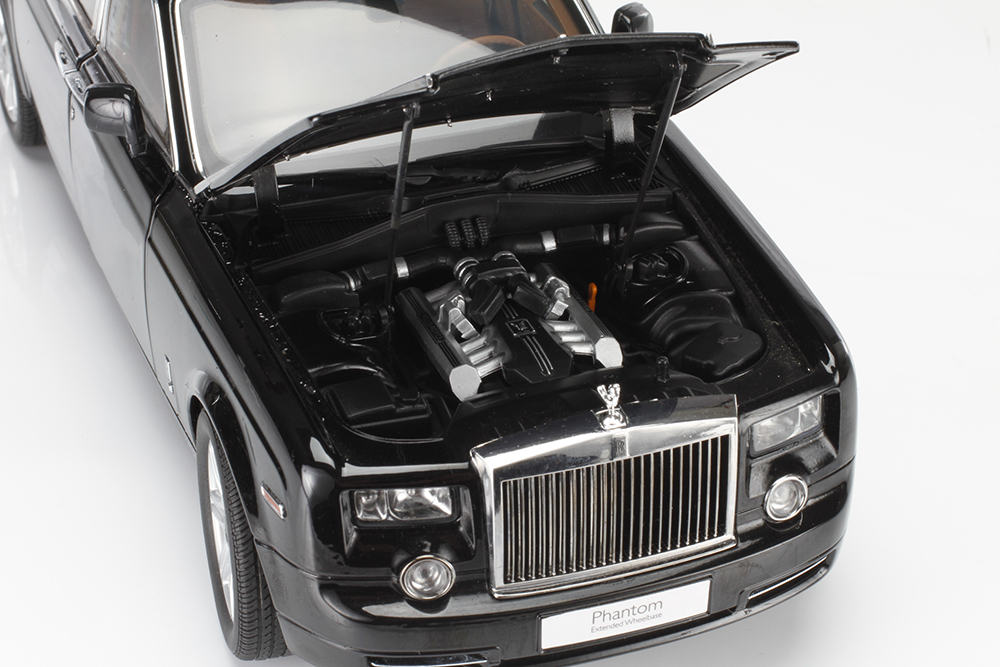 The panel gaps would make lifting the hood next to impossible were it not for the button hidden side under the front bumper driver’s side that tips it upward just enough to grasp. Beneath is a relief-molded version of the V12 topped by separate intake throttlebodies, runners and plenum. There are also simulated pneumatic struts that support the expansive panel (more than 6 feet long on the real car!) The relief-molded tray itself is a tad shallow but has lots of detail, and the intake assembly gives a realistic splash of metallic color and crisply scripted emblems as well. Rolls models are seldom about the powerplant, but Kyosho’s model provides a solid effort underhood. 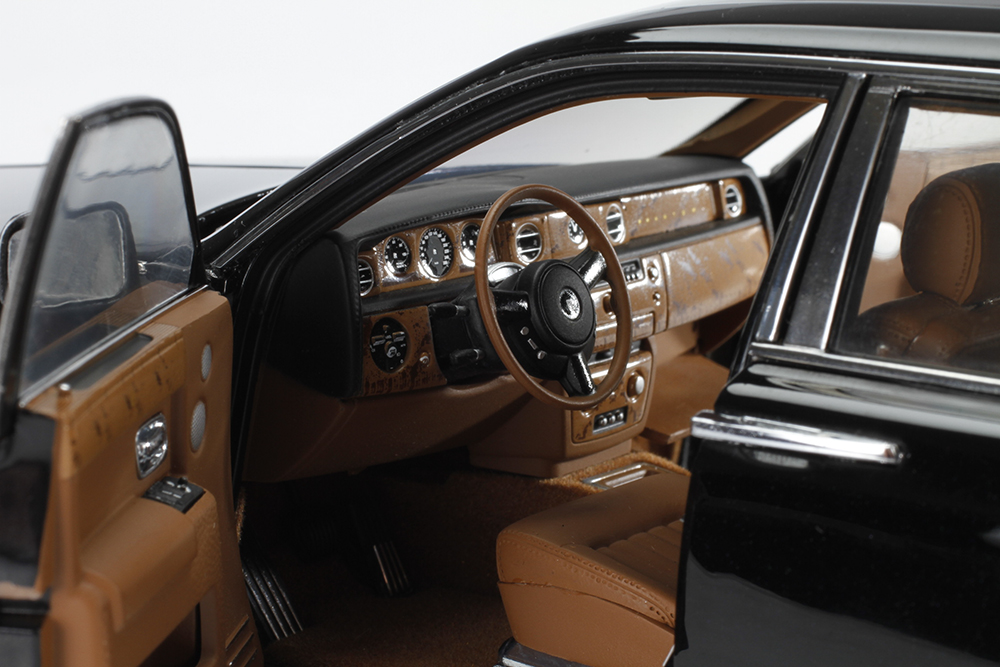 The front doors open conventionally, while those extra-long coach doors are rear-hinged. The combined effect is akin to swinging open the double doors to a cathedral, or perhaps to Buckingham Palace. Rear-seat passengers walk more than climb in. Before we move past the doors, take note of the opening panel housing additional switchgear and what looks to be an ashtray big enough to accommodate Daddy Warbucks’ most extravagant Cohiba. Even more fun are the silver knobs in each doorjamb; depress each one lightly and it springs outward to reveal an umbrella! (After all, it wouldn’t do to have that Cohiba—and the plutocrat perched on the end of it—precipitated upon.) 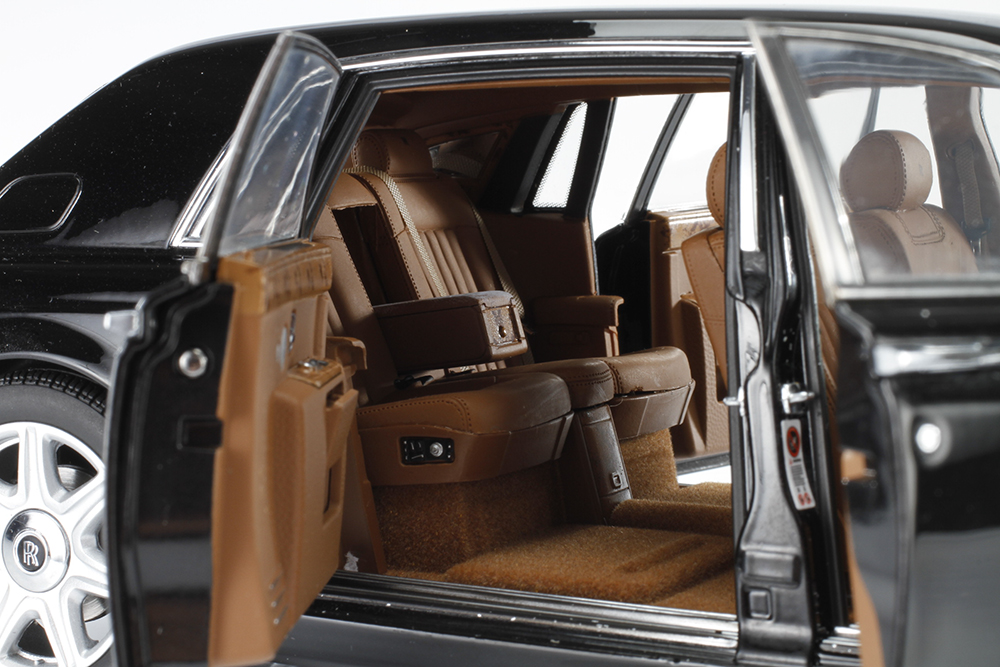 Once inside, passengers are no less pampered. There’s enough leg room for Shaq to do his Pilates in without ever touching the forward seatback. Koysho has bathed the whole area in a super-authentic rendition of Rolls’ Fawn Brown with flocking for the carpeting, soft-touch plastic for the leather, and complementary simulated burled walnut inlays liberally strewn about the interior. Rolls provides burled walnut writing desks for the rear seats and optional video screens for the seatbacks, but neither are included on the model. What is included is a fold-down arm-rest in the rear, and in the front an opening glovebox and a clamshell-opening center divider. The front seats slide fore and aft on polished metal rails and the instruments in the dash are meticulously detailed. This is as nice an interior presentation as you’ll find in a 1:18 model of a modern automobile, and it is the star of this show. 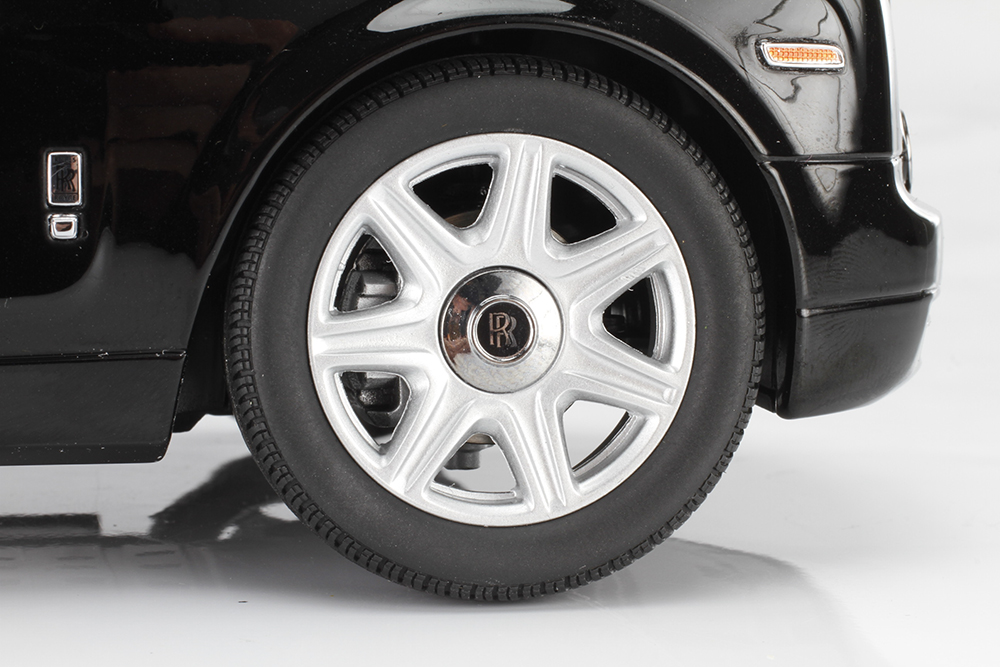 Immense matte-aluminum finish 7-spoke wheels with polished center caps emblazoned with the RR logo carry tires with authentic tread, but they lack sidewall markings. Behind them you can just make out revolving brake rotors and calipers. The underside of the Rolls is mostly obstructed by an underbody tray, although there is gratifying detail on the exhaust system and rear suspension subframe (which even has some spring-action to it.) 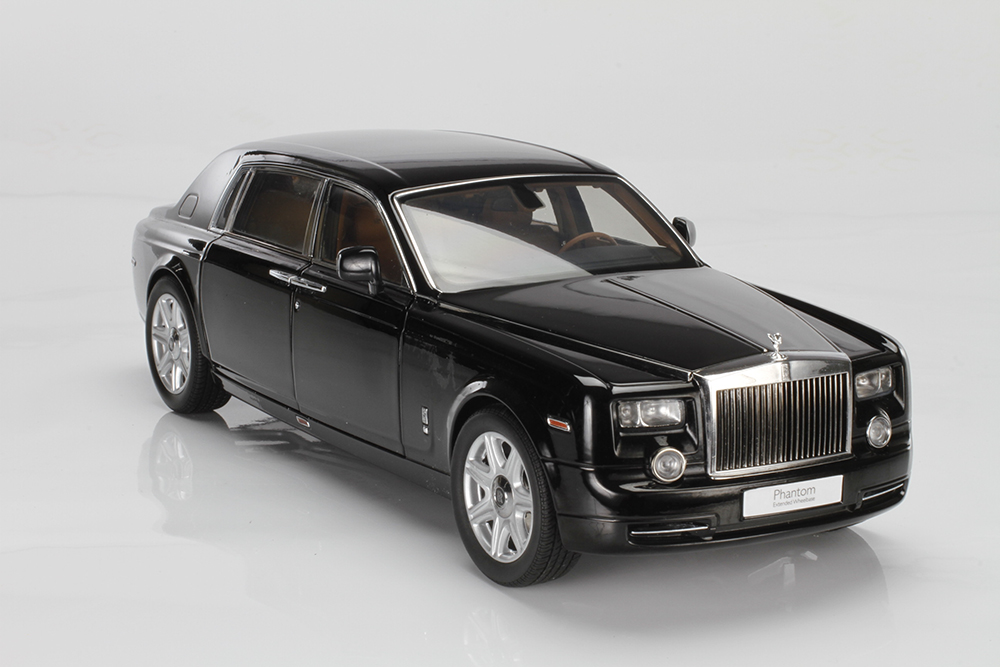 Rolls-Royce enjoys a singular status atop the automotive world—no other brand is so universally associated with class, prestige and uncompromising luxury. For Kyosho that sets both a high standard and offers up an enticing reward for living up to it in scale. It’s fitting then that its Rolls models are among its most detailed and impressive 1:18 offerings, and the EWB Phantom is the flagship of the Rolls line. It’s a majestic model that showcases what Kyosho is capable of. 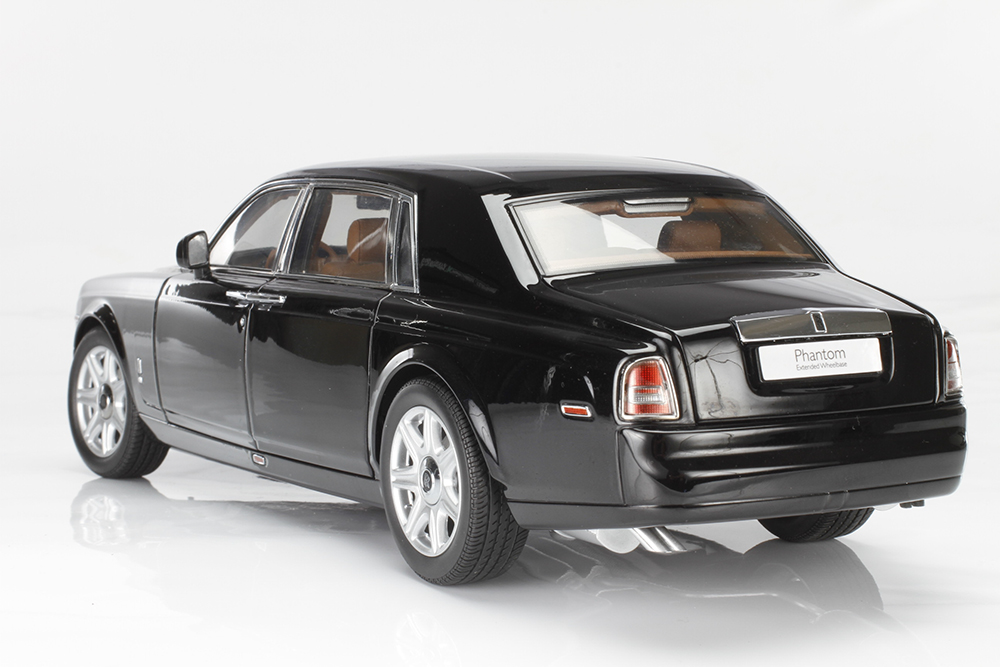