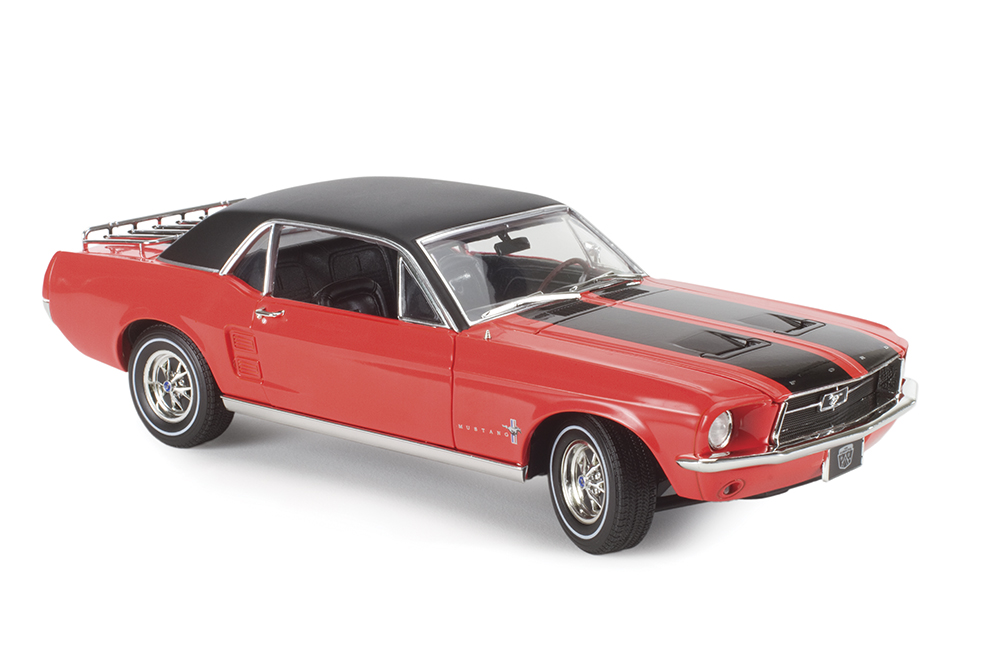 Not that any diecast company really needs an excuse to release a classic ‘60s Mustang replica, but this year’s 50th Anniversary of Ford’s foundational pony car has inspired a veritable stampede of scale ‘Stangs. Among the most prolific has been GreenLight, with several interesting variations on its 1967 coupe casting. When it comes to diecast, the coupe (aka notchback) is much less common than the higher profile fastback, which definitely makes it compelling from a collectors’ perspective. Adding to the collector appeal is the variety of the offerings. Ford released several region-specific versions of the Mustang starting in 1966 and carrying through the 1968 model year. The best known (and most numerous) were the 1968 GT California Specials, although it was actually one of the later regional specials. But there were numerous other regional models offered before the GT/CS. 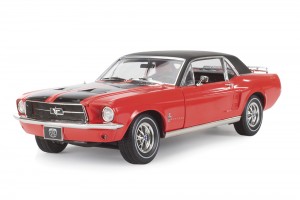 The Ski Country Special was a winter-season promotion for the Colorado region to complement the summertime High Country Special. Unlike the HCS, the Ski Country Special more than just a cosmetic option package. Targeted at skiers, the package included an ‘equa-lock’ rear axle, snow tires and a special trunk-mounted ski rack affectionately known as the “coffee bar” for its tendency to hold coffee cups securely on the rear deck while owners secured their skis! It could be ordered one of five special colors, each named after a famous ski resort: Aspen Red, Breckenridge Yellow, Loveland Green, Vail Blue, or Winter Park Turquoise. The exact number of Ski Country Specials sold is unknown, as the count is complicated by the fact that the package could be ordered on Mustang coupes and fastbacks, as well as the Galaxie and Fairlane. Best estimates point to either 198 or 247 Ski Country Special Mustangs in total for 1967. 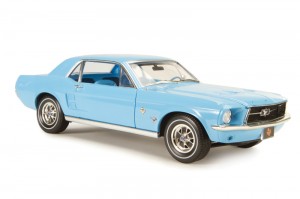 The Lone Star Limited Mustangs (better known as the “Bluebonnet Special” due to its color) were even rarer. Just 175 of these Bluebonnet babies were sold in 1967, and only in Texas. They were all notchbacks with the Sprint option package, luxury interior, and styled steel wheels. Blue Bonnet Specials could be ordered with the inline-6 or a 289 V8 with a stick or automatic. 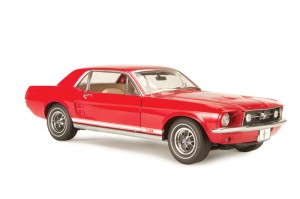 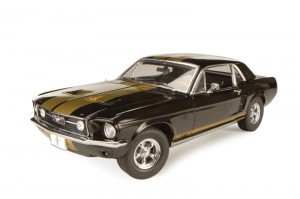 Performance enthusiasts didn’t need to resort to a limited edition special, however. Starting in 1967, for the first time a factory big block appeared on the Mustang option sheet. If you selected the GT package, you got a host of appearance and functional items. Power front disc brakes, dual exhaust, handling package, and 289 V8 engine as standard equipment. GTs were recognizable by their grille-mounted fog lamps and rocker panel striping. But most importantly, selecting the GT also unlocked the options for the K-code Hi-Po 289 or new-for-1967 390 big block engines. 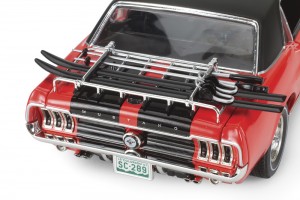 In the past few months GreenLight has released quite a range of notchback ’67 Mustangs. Among them are a Ski Country Special and the 1967 Lone Star Limited, as well as a couple of GTs. GL’s Ski Country Mustang is painted Aspen Red with black stripes and a black vinyl top, although their version of the color is a shade brighter than the original. Of course, the signature exterior feature of the Ski Country Special is the ‘coffee bar’ ski rack, which GreenLight molds quite accurately out of chromed plastic. They augment it with a scale pair of skis, poles, and brackets to clamp them to the rack. As reviews back in 1967 observed, the rack is rather small to hold skis, but the brackets do work. It would have been really fun if GreenLight had also included a 1:18 coffee cup! Other Exterior highlights include the nicely etched scripts and badges on the hood, trunk, and front fenders. Just below the trunk rack on the rear deck is a special badge emblazoned with crossed skis and the label “Ford Ski Country Special.” 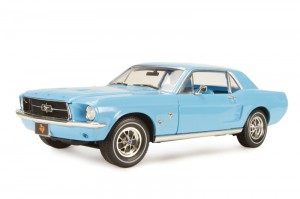 The Lone Star Limited’s exterior is at once more basic and more striking. Bluebonnet is a quintessentially ‘60s Ford color, and without any stripes or contrasting vinyl you can see why it became better known by that than by its official name. The only exterior extra to differentiate the Bluebonnet Special from more mundane Mustangs is a Texas-sized badge on the quarter panel just above the ‘Mustang’ script and galloping logo. Paint on this one is spot-on, but oddly the door hinges don’t allow the doors to sit quite flush. 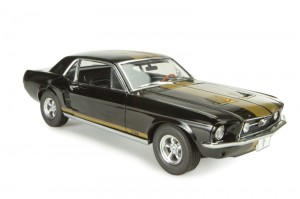 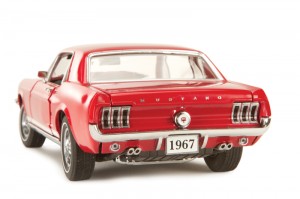 The pair of GTs are a nice counterpoint, both to the specials and to each other. The red car represents a typical performance model as it might have rolled off the showroom floor, while the black and gold coupe is more indicative of a personalized Mustang one might see on the street. The black-with-gold stripes color treatment is not coincidentally reminiscent of a Hertz Shelby, although of course that was a 1966-only model. The color scheme looks just as dapper on a 1967 in my opinion! Paint quality on both is excellent, and while the GT rocker stripes replace some of the etched trim, they too are expertly rendered. 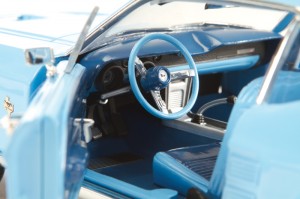 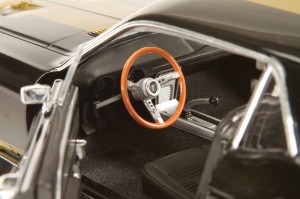 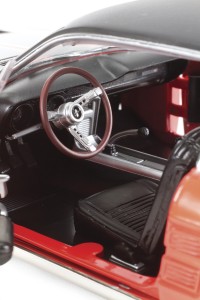 All four coupes are 4-speed cars with a matte-silver finish deluxe center console with tabs for holding the cast metal seatbelt buckles when not in use (which, in 1967, was probably almost always!) The belts themselves are woven nylon material, color-keyed to the rest of the interior. The door panels and seat backs are also Deluxe Interior spec, although the emblems and door inserts are not painted silver on the Bluebonnet and Ski Country Specials, so they are more representative of the base interior. Perhaps the biggest difference is the floorboards; the two specials have hard plastic floors, whereas the two GTs have finely flocked carpeting. Dashboards on all four are all well detailed, but here the Bluebonnet and the red GT are the stars; thanks to their other-than-black interiors, the dashboards receive two-tone treatment that better showcases their detail. 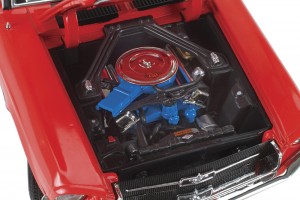 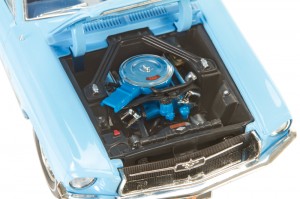 Ford offered quite an array of powertrain options in 1967, from the lowly 120hp inline-6 all the way up to the burly S-code 390 with 320hp. Sandwiched in the middle were a trio of 289s, with 200, 225, and 271hp, respectively. Being that the two Mustang specials are not GTs, the top option would be the 225-horse 289. Lifting the hoods of each of these two reveals a V8 adorned with a 289 decal on the air cleaner. So far so good. But closer inspection reveals chrome valve covers, which came only on the K-code 289 (GT only.) Hmm, perhaps they were a dealer installed dress-up item? But no, the shape isn’t right for a 289 either. 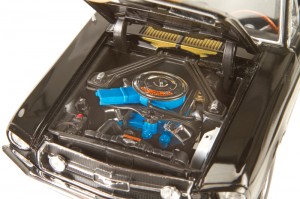 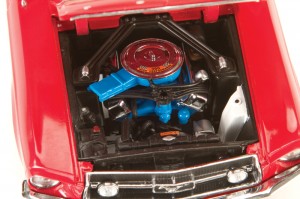 And when we hoist the hoods of the GTs we see why. The casting for all four engines is identical, save that the two GTs are sporting decals on their air cleaners denoting the presence of the 390! And the engine casting is a realistic representation of a 390. It has plug wires, a properly molded accessory assembly, and a strut tower brace. The GTs even have painted coolant overflow reservoirs (but oddly the specials do not.) Given the price point of GreenLight’s notchbacks, it is understandable that they would not want to tool up two separate sets of molds for the motor. However, Mustang guys can be a particular lot when it comes to engines, so I have to say GreenLight only gets 2 out of 4 here. 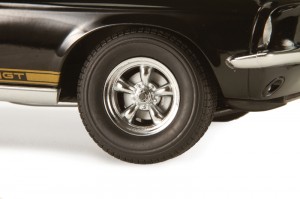 When it comes to rolling stock, one of these ‘Stangs is not like the others, but all of these ‘Stangs definitely belong! The two specials and the red GT come with styled steel wheels, nicely polished with the gaps painted flat black for authentic contrast. The white line on the sidewall stands in for any other markings, but the tread pattern is outstanding. The outlier in the group is the black and gold GT, which wears as set of 14-inch Torq Thrust IIs. Note the differing optical effects. Both wheel/tire combos are the exact same dimensions—and in fact use the same tire molding—but the differing design and lack of a sidewall stripe makes the Torq Thrusts look smaller diameter and the tires look bigger! Regardless of which style you prefer, both are superbly executed. 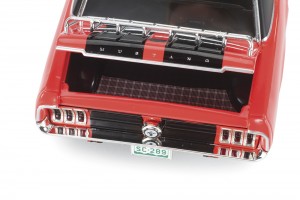 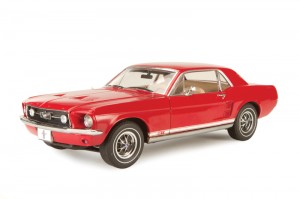 In this 50th Anniversary year we’re seeing a lot of Mustang replicas; many of the usual suspects, but credit GreenLight for dishing up some of the rarer special models as well. That is the appeal of the Ski Country Special and the Lone Star Limited models in particular. They are interesting footnotes in Mustang’s history that some collectors may never have known existed, while others will enjoy a blast of nostalgia. The GTs are more mainstream of course, but their appeal is in their additional detail and accuracy. I’m an engine buff, so I have a slight preference for the 390-equipped GTs, but at price points in the $50-60 range for each, all four of these represent solid values, and GreenLight has several more ’67 coupes planned in the coming months so stay tuned!