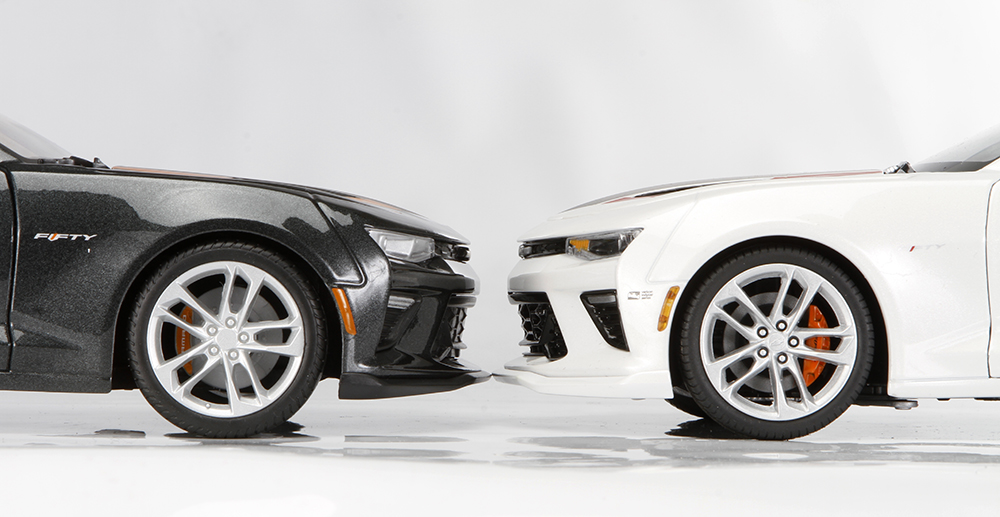 Just about everybody knows by now that 2017 marks the 50th anniversary of the Camaro. Certainly Chevy is doing its part to raise awareness, starting with introducing a special 50th Anniversary Camaro SS to pace the 100th running of the Indianapolis 500 on May 29, 2016. If that weren’t enough, the pace Camaro was driven by none other than Roger Penske in his 50th anniversary year as a team owner—a partnership that started with Penske fielding the original ’67 Camaro in the Trans Am series with driver Mark Donohue. The Anniversary package that debuted on the pace car is now offered on the 2017 Camaro in LT (base motor) and SS (V-8) guise, in both coupe and convertible body styles. They include features seen on the pace car like the package-exclusive 20-inch wheels, a special grille and hood stripes, specific “Fifty” fender badges, and special leather upholstery and interior treatment.  While the pace car was white the Anniversary road cars come in Nightfall Gray Metallic. Both Auto World and Maisto produce 1:18 models of the Anniversary Camaro—Auto World has the white pace car, while Maisto is releasing the gray production version. Given their price points ($100 versus $30) they are obviously not direct competitors, but it’s still cool to see them door to door, and both are worthy additions to a Camaro collection. Let’s take a closer look at both! 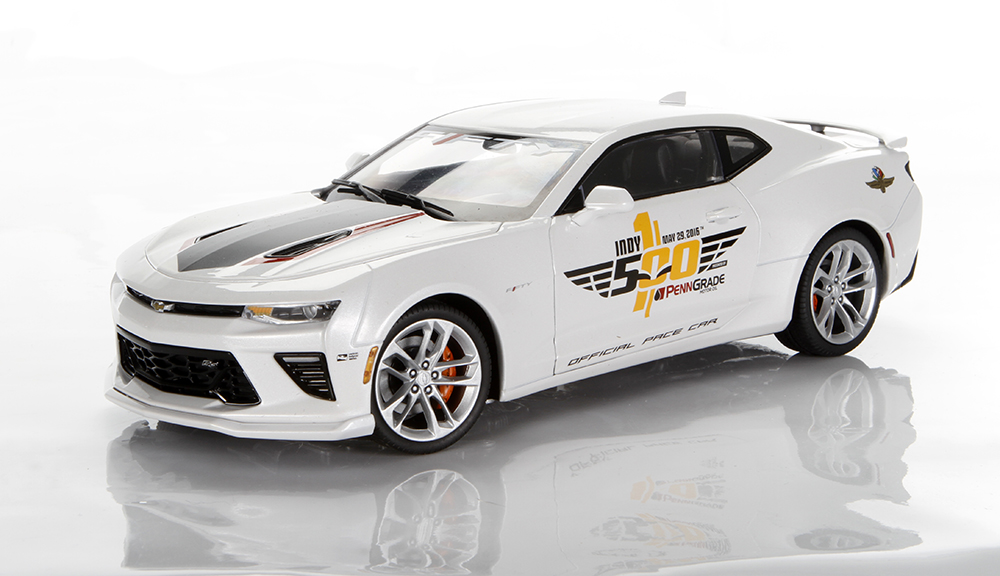 Auto World released its excellent 6th-generation Camaro casting earlier this year with a 2016 SS. This 2017 edition gets new wheels, a front splitter on the bottom edge of the front bodywork, new interior trim, and a comprehensive graphics package emulating the Indy 500 Pace Car that Roger Penske helped reveal to the world at the “Greatest Spectacle in Racing” last May. The pace car wears a color Chevy calls “Abalone White”—a fine metallic pearl white that shines nicely in person, but is tricky to get to display to full effect in photos. The gorgeous door graphics depicting the 100th Running of the Indy 500 display wonderfully, as do various smaller IndyCar-related graphics on the rear flank and front corner. Inlaid lenses for side marker lights, separately cast door handles and egg-crate grille are other features that give the Auto World Camaro visual sophistication. The grille has a panel behind (instead of a radiator) which detracts from the realism a bit, but otherwise the exterior really sets the pace.

FROM THE RACE TRACK TO YOUR DRIVEWAY (OR SHELF) 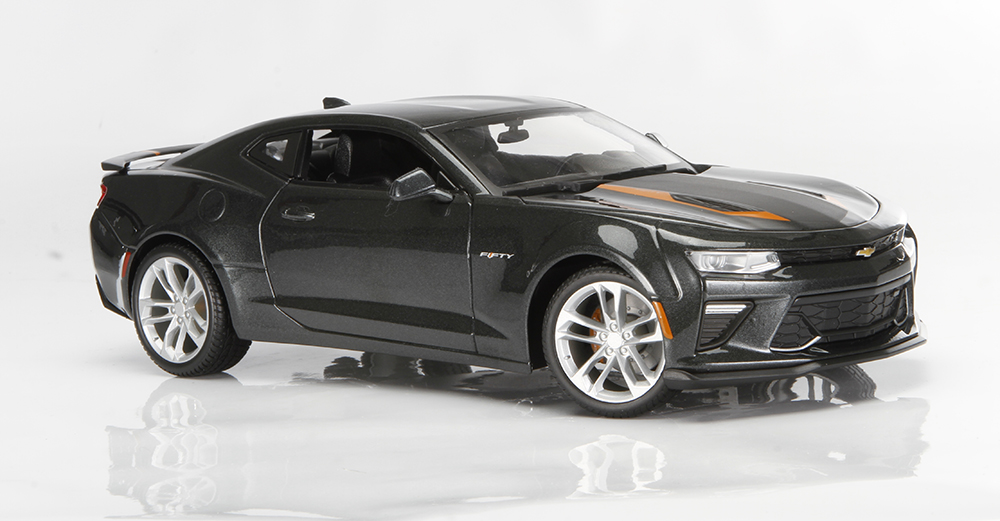 We reviewed Maisto’s ‘16 Camaro SS back in the Summer of 2016, but this 50th anniversary version enjoys a number of updates—including the special Nightfall Gray Metallic paint and stripe package—while still coming in at the same bargain price. What strikes you first about the Maisto car’s exterior in this company is how little difference there is between it and the Auto World car. Contours for both virtually identical, as are their stances. The Maisto car is just a hair narrower, but that might actually be slightly more accurate to scale. There are some concessions to price-point; the marker lights are painted rather than inset lenses, there’s a bit more waver to the clear coat, and the window surrounds are slightly thicker. But these are minor differences. From anything further than arm’s length two could be color variations of the same model—which is a tribute to Maisto’s bang for the buck to be sure! 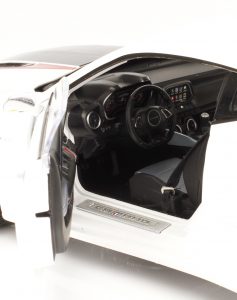 When we look inside we start to see where Auto World’s extra cost is justified. The two-tone upholstery, embossed sill plates and fabric seatbelts with etched metal buckles greet you right away. There are more subtle details as well—the infotainment screen is detailed, the center console and inner door panels have paint accents, and there is flocked carpeting on the floorboards. The car is a 6-speed (you didn’t think “The Captain” would wheel a slushbox, did you?) and the nicely detailed gear lever is matched by a 3-pedal arrangement in the foot well. Even the seatbacks move, but you may want to resist testing that lest you mess up the positioning of those nice woven seatbelts. 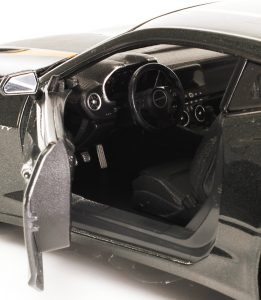 Maisto’s version delivers plenty of visual appeal inside as well, although it is more monochromatic without the console and door inserts. They opted for open side windows (the AW car’s are up) but they look just as good. The complicated shape of the dashboard is well rendered, down to the trim represented by semi-metallic paint. Seat shape is great and there is convincing surface texture molded in, but the floorboards are hard plastic rather than carpeted. Maisto even gives us hidden hinges (a rarity at this price point) but it lacks the embossed door sills and seatbelts.

The biggest difference between these models shows up in the running gear. Hoisting the peculiar rounded-nose hoods reveals two versions of the 6.2L LT1 V-8 that powers the all SS versions of the Camaro. At 455 horsepower and an equal amount of torque, it dishes up plenty of performance for pace car duty—in fact, it is more powerful than the race motors Penske installed in his original Trans Am Camaros! Whereas Maisto’s version is a relief-molded motor plate, Auto World includes a fully 3D-molded engine with block, heads and exhaust manifolds than connect realistically to the exhaust system under the chassis. 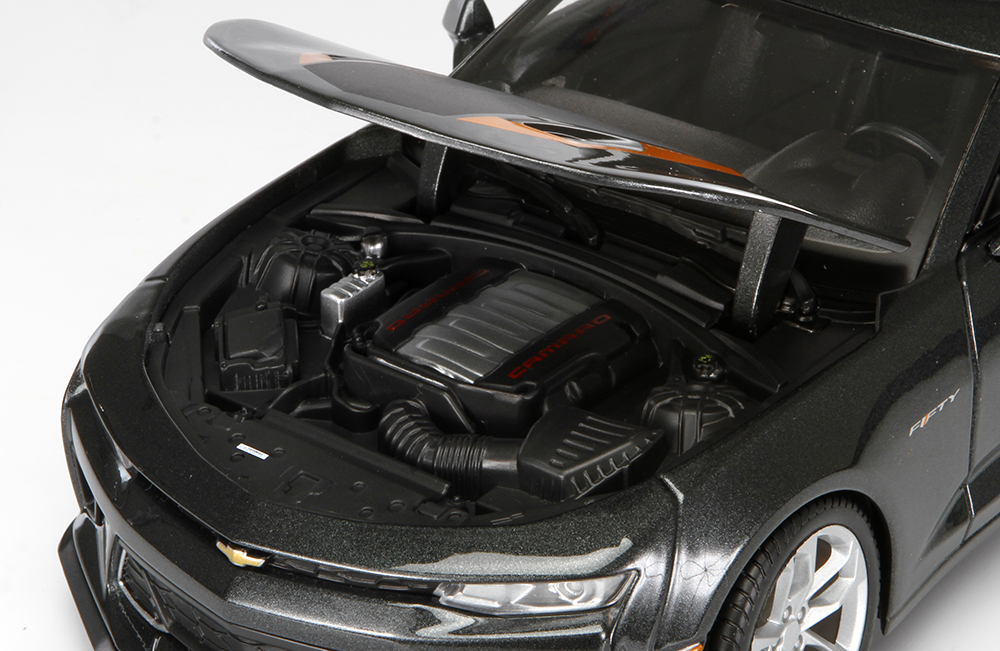 Maisto does a fine job putting realistic touches into the plate, and accent paint further picks out molded details, but looking down the gaps at the front and sides reveals the limits of that design. For engine geeks Auto World’s treatment is much more satisfying, and it further distinguishes itself with a full set of hoses for intake and cooling systems. 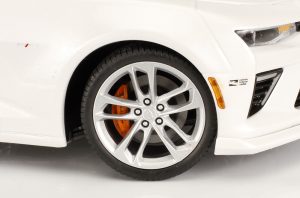 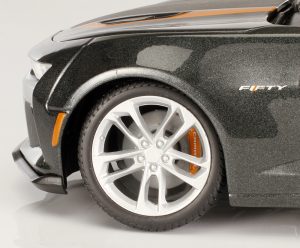 All 50th Anniversary Camaros come with an exclusive design 20-inch wheel—a split 5-spoke design with the void in the center of the spokes emulating the diagonal shape of the ‘I’ in the special “Fifty” script that adorns the flanks. Both versions are spot-on with wheel and tire design. When you get close you see the Auto World version has more detail on the lugs, and the brake discs behind are quite a bit more realistic, but both sets are excellent. Both cars feature working springs as well. When you flip the car over the Auto World car truly shines with a meticulously recreated chassis stellar suspension detail. Both cars have a fully molded dual exhaust; Maisto’s is chromed plastic, while Auto World paints theirs a realistic steel color. 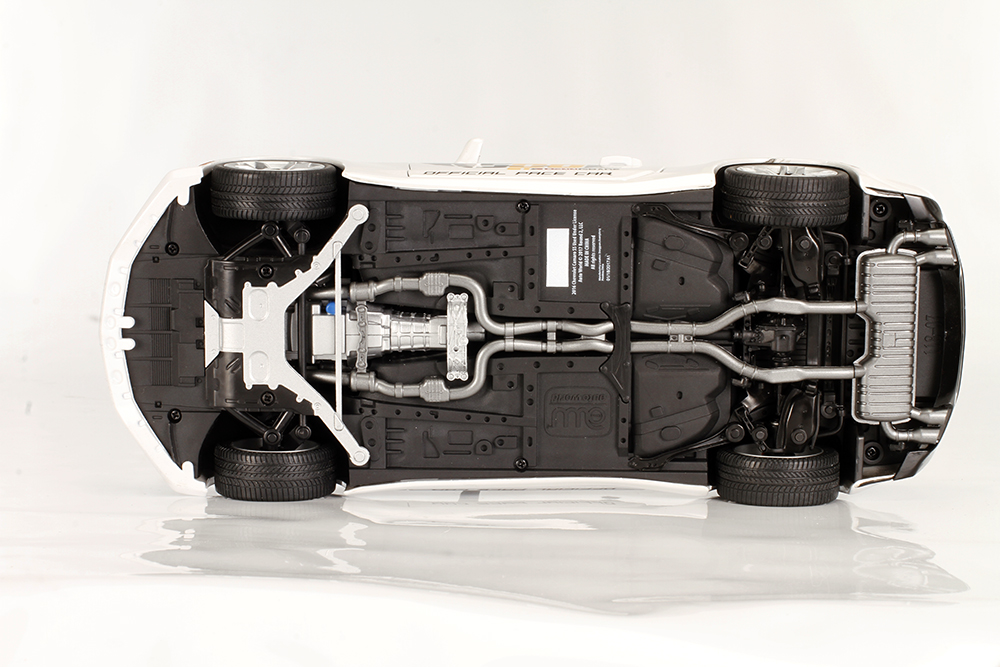 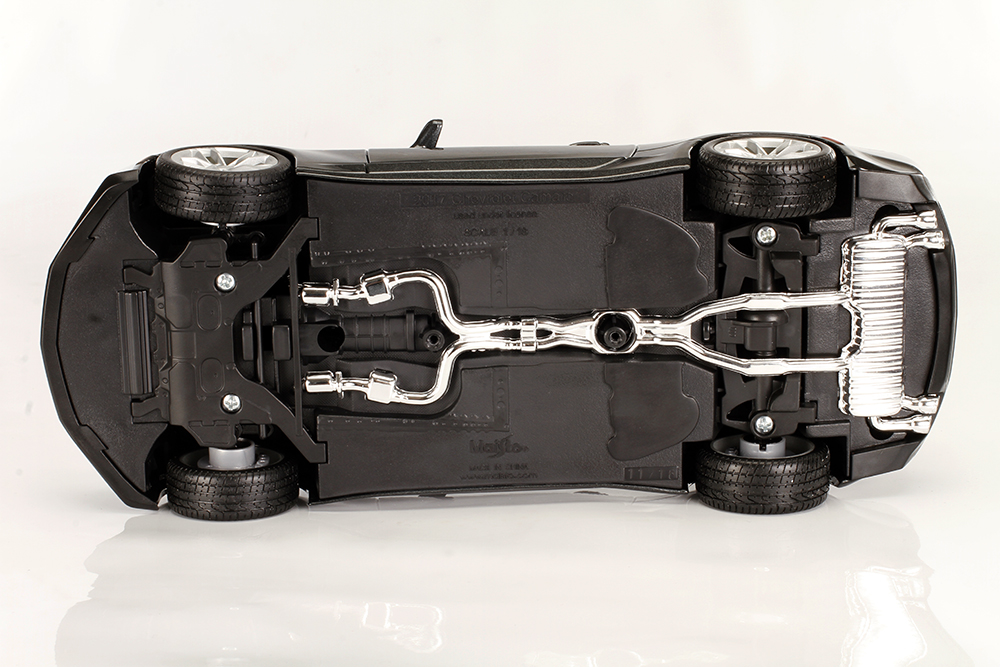 To say the 6th Generation Camaro is a revelation is an understatement. That it offers performance that rivals world-class sports cars for around $40K is astounding. It is without question the best all-around performance car ever to carry a ‘Camaro’ badge, and it comes at the right time. To celebrate Chevy has put together the 50th Anniversary package, and in the process provided the perfect opportunity for collectors—whether it be full-scale or in diecast. Both Maisto and Auto World have done exceptional jobs with their respective 1:18 models. The Auto World version offers tons of detail for its sub-$100 price, making it an exceptional value. If you can be satisfied with less detail—particularly in the engine and chassis department—the Maisto is a downright steal at around $30. I would not hesitate to recommend either. In fact, given their affordability, why not get both? 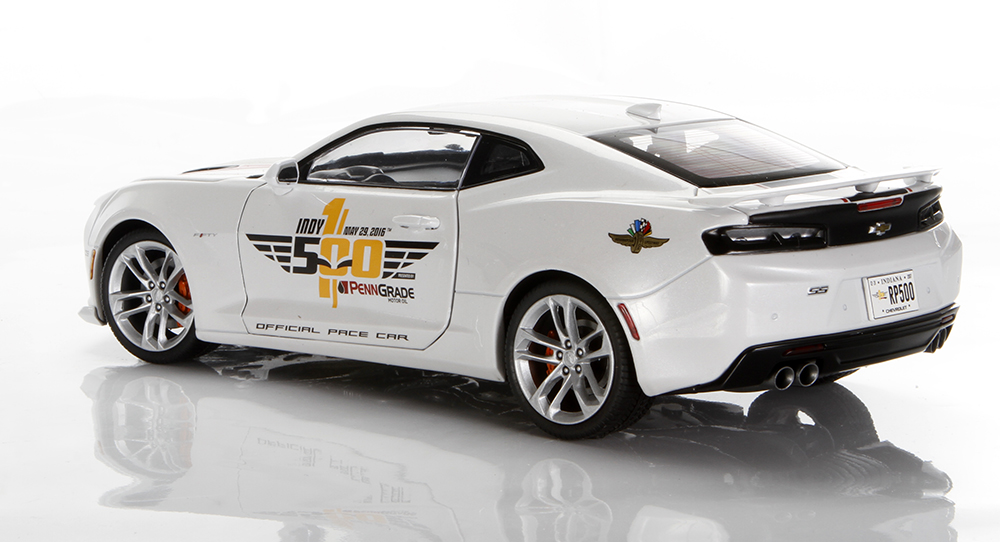 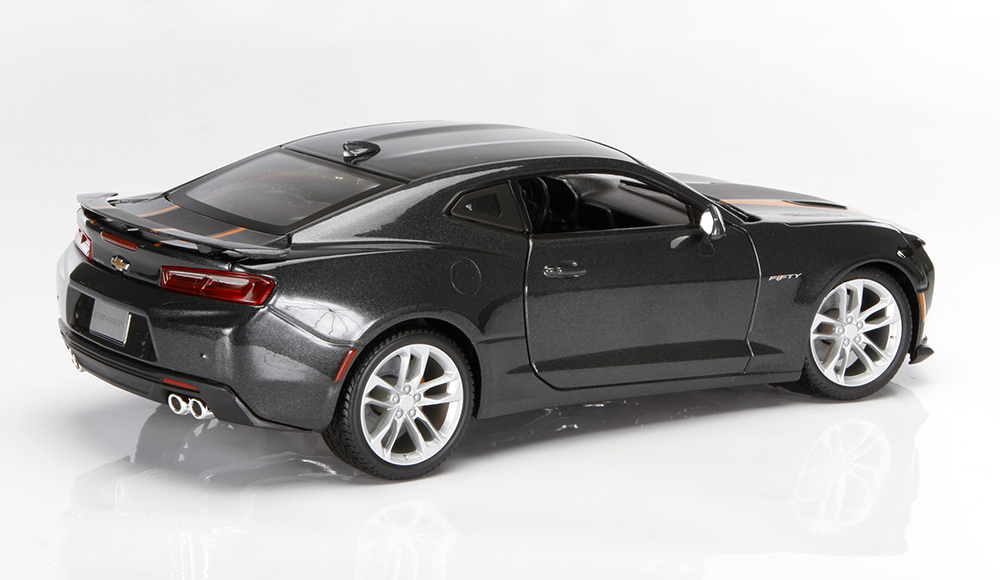