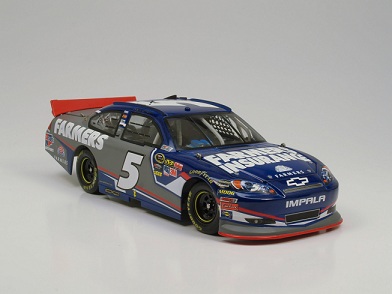 Lionel – yes, that Lionel – is now a player in the NASCAR collectibles field, and they’re making some killer stuff. This pre-production pair of 1:24 Hendrick Motorsport Impalas is deco’d in 2012 liveries, replicating Dale Earnhardt, Jr.’s forthcoming “Diet Mountain Dew” No. 88 and Kasey Kahne’s No. 5 “Farmers Insurance” – sponsored car. The models are well featured, with opening hoods and trunks, steerable wheels, meticulously wired Chevy engines, flip-up roof flaps, and full race interiors jammed with all the gear the real cars haul. The wheels and tires are impressive, as is the chassis and lower engine detail, and the netting on the driver’s side –  but the models’ decoration, done in superb tampos (seal coated on the limited edition “Frost” finished 88, and left natural on the primer finish No. 5) is what really sells these images. That, and the fact that the company also recently announced a full line of golden-age “NASCAR Classics”, would seem to indicate that Lionel is on track in more ways than one. 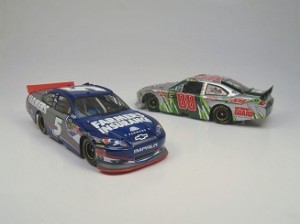