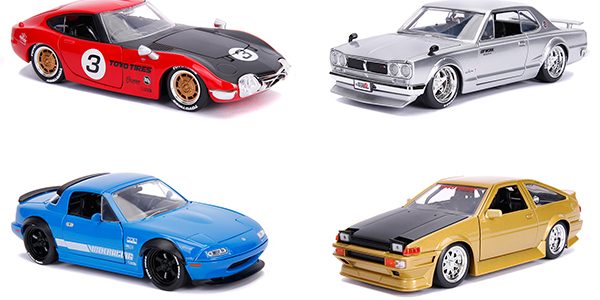 Jada’s JDM Tuners series has risen to become one of the brand’s signature lines in a relatively short period of time. Comprised of offerings in 1:64, 1:32, and 1:24, it has a little something for everyone, though being fans of detail we naturally gravitate toward the big scale cars. The 1:24 lineup has included the expected complement of modern Japanese performance cars, but tucked into the first release was also a classic Datsun 240Z. The Z turned out to be the star of the set for many collectors; certainly that was the case for us! It turns out the designers at Jada felt the same way, and after seeing the reception that first Z received they immediately went to work developing more classic JDM cars for the line. They showed us a sneak peek at some of the planned releases earlier this year as resin mockups, and now those cars are just about ready to hit the market so Jada has shared with us the production-ready final versions, and—much to our delight—snuck in one or two surprises that we did not see earlier this year. Notably, of the four 1:24 cars in this upcoming release none is newer than 1990—demonstrating that Jada is committed to feeding the collector appetite for classic Japanese performance cars as the JDM Tuners series moves forward. In chronological order, they are: 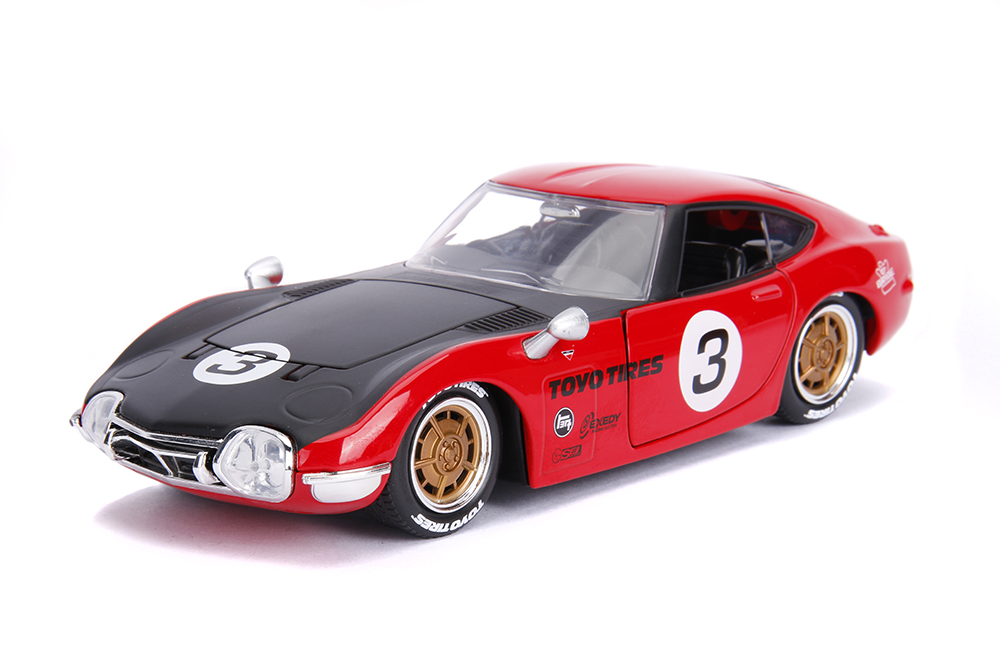 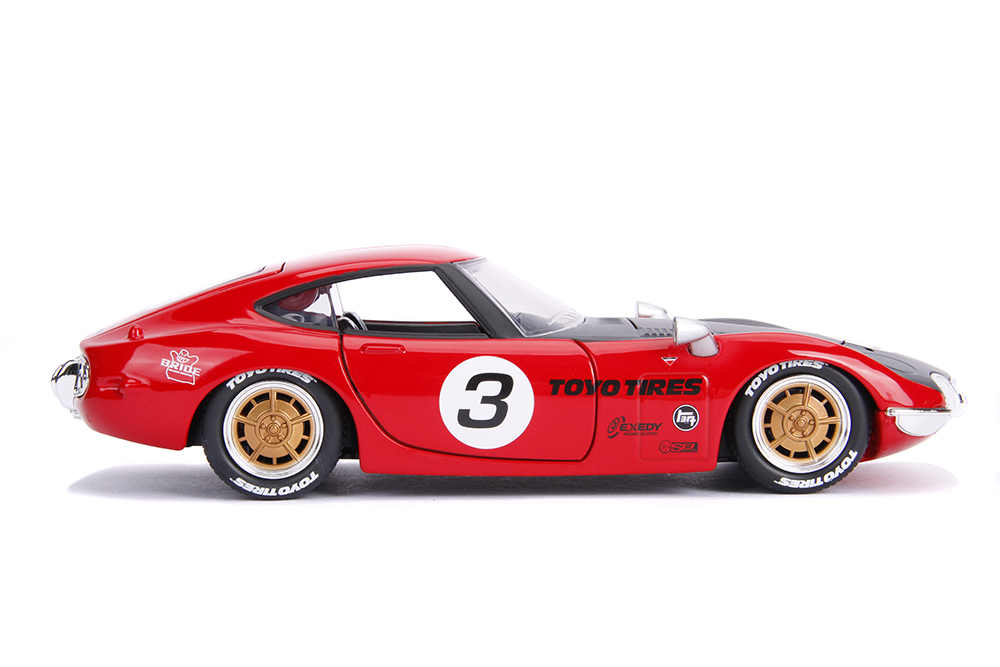 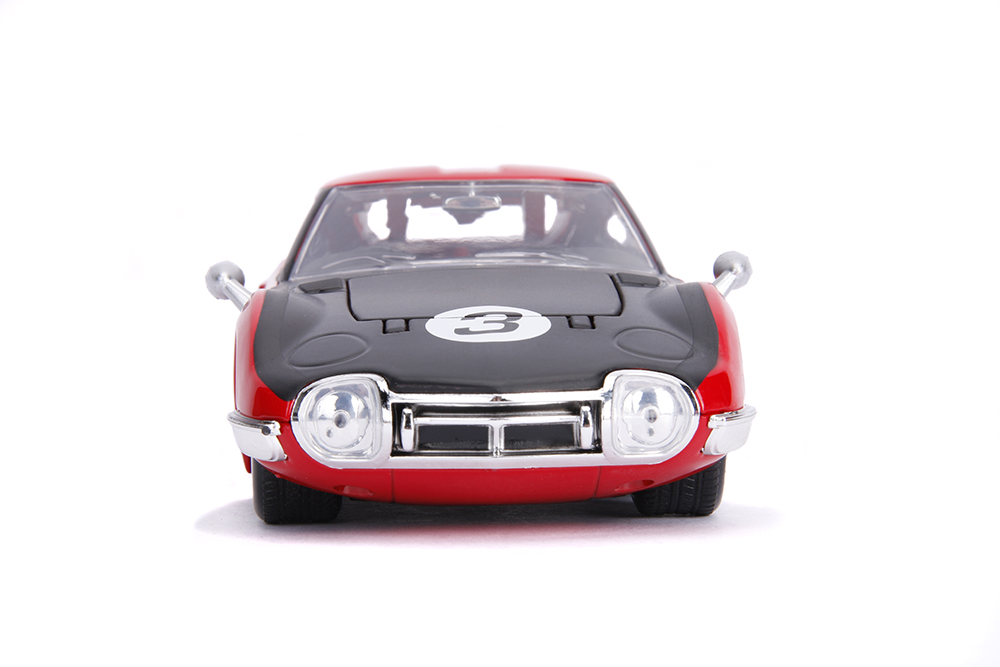 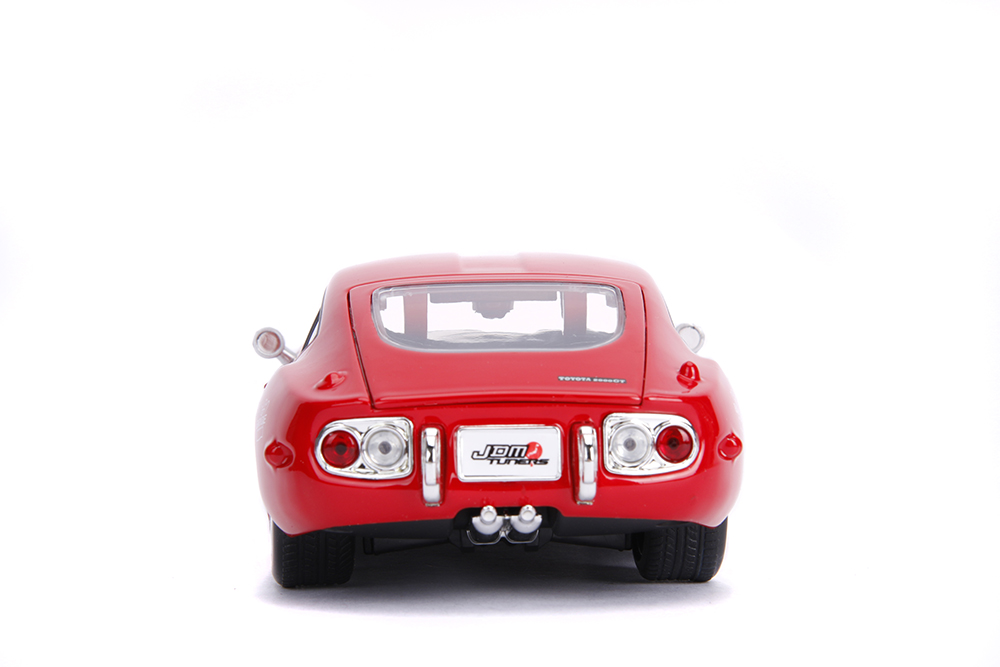 The mockup of the 2000GT wowed us back in February, and the finished piece delivers on the promise that rough version contained. As Michael Jimenez—Jada’s Director of Vehicles and Creative Service—explained to us back in February, they wisely left the lines essentially stock because Toyota’s original supercar is so classically beautiful already. Modifications for duty in the JDM Tuners line were limited to slightly lowering the stance and equipping it with slightly larger diameter (but still quite realistic) versions of the stock pattern wheels wrapped in modern (and wider) Toyo radial tires in place of the scrawny Dunlops that came on the original. It wears number billboards and a few racing decals, but seeing as how several of the just 351 original 2000GTs built found their way into sports car racing, including three campaigned by Carroll Shelby (yes, that Shelby!) in SCCA—one of which carried the number “3” like this (although the color scheme is different than the Shelby car.) 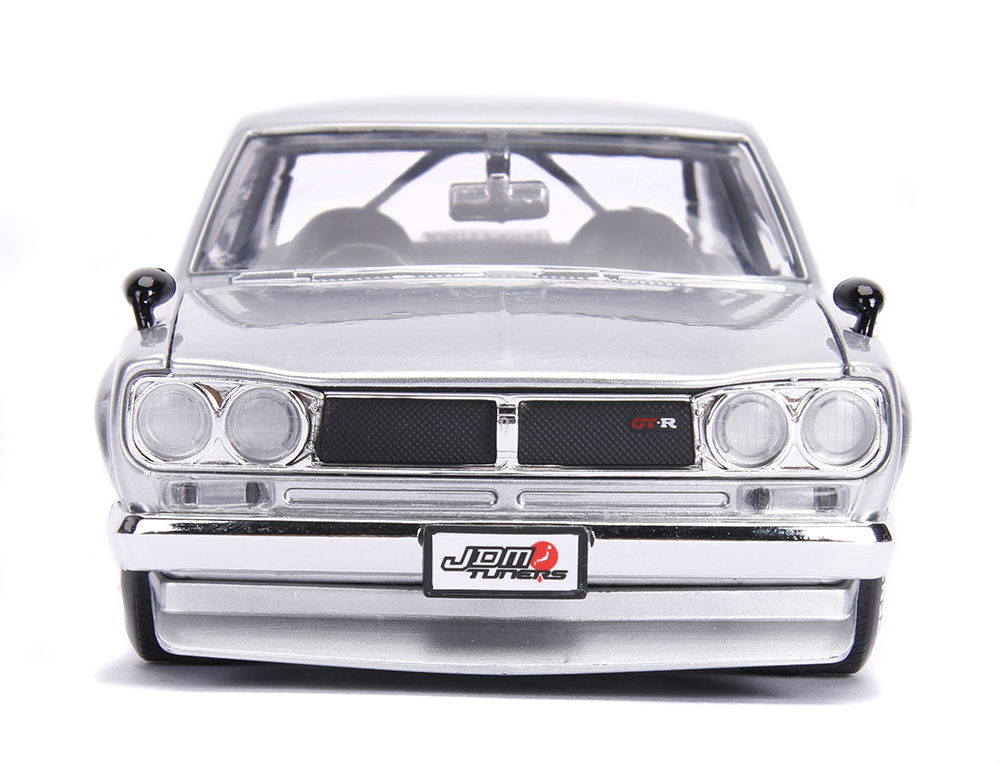 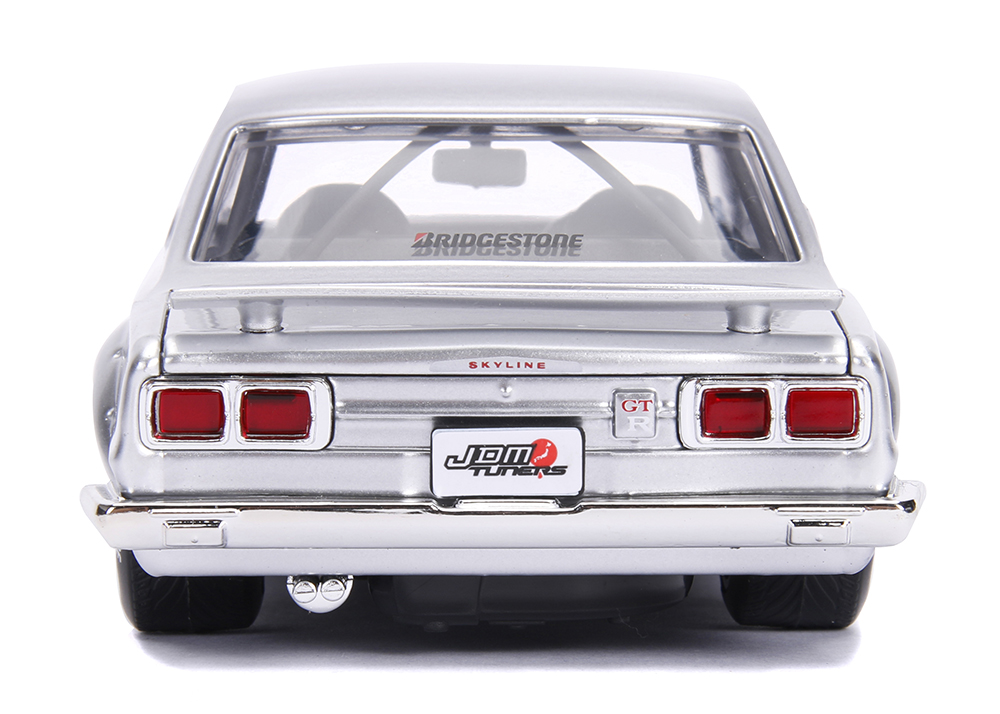 The 1971 Skyline coupe designated KPGC10 but better known by its nickname “Hakosuka” (meaning ‘boxy skyline’) isn’t technically the first GT-R. That distinction goes to an even boxier PGC10 sedan version launched in 1969 which shared the same chassis and legendary S20 inline-6 engine, but for collectors the Hakosuka coupe is really the first GT-R that matters. With a fully independent suspension, slick-shifting 5-speed gearbox, and weighing in at just 2400 pounds it handled beautifully. And while 160hp may not sound like a lot by today’s standards, in the lightweight GT-R that 7500-rpm screamer of an S20 had better power-to-weight ratio than a 350-powered Corvette! Jada’s 1:24 version gets similar treatment to the Toyota 2000GT, with exterior embellishments limited to larger diameter aftermarket wheels and low-profile tires (Bridgestones in this case) and a couple decals. Inside it sports a racy looking roll cage. 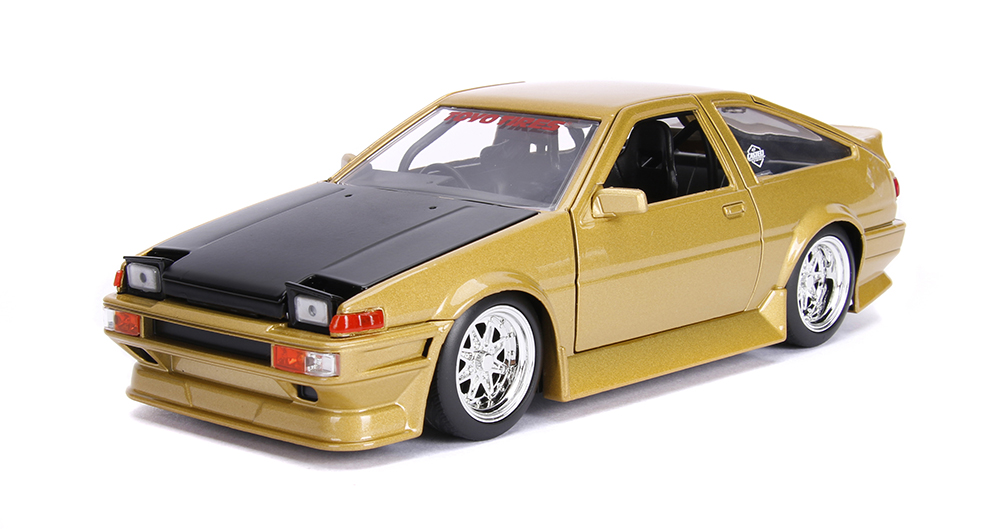 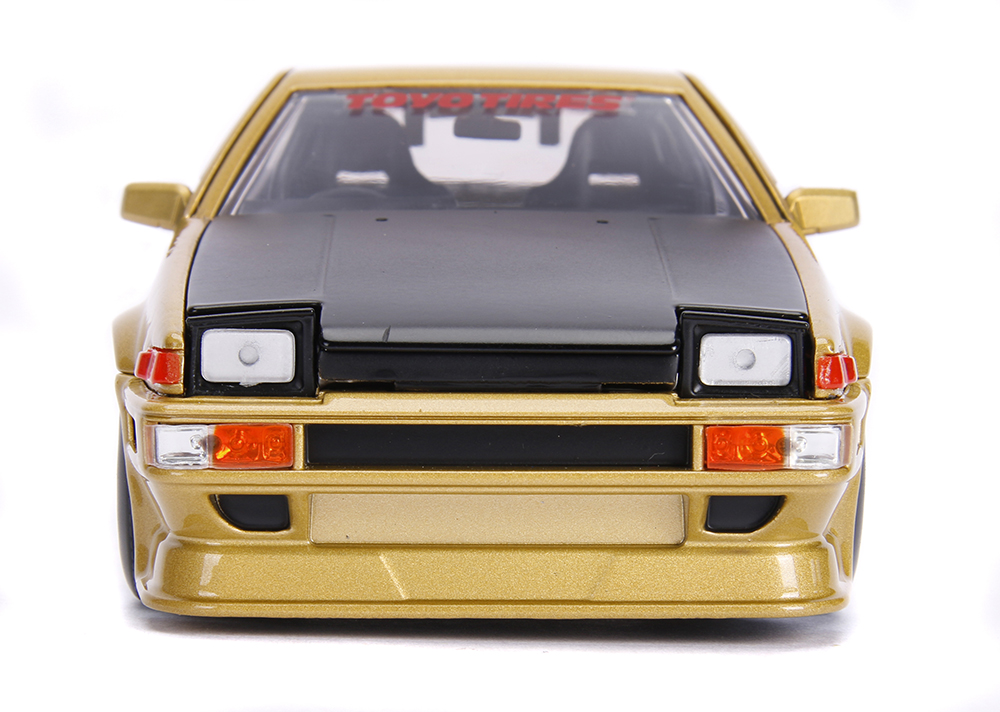 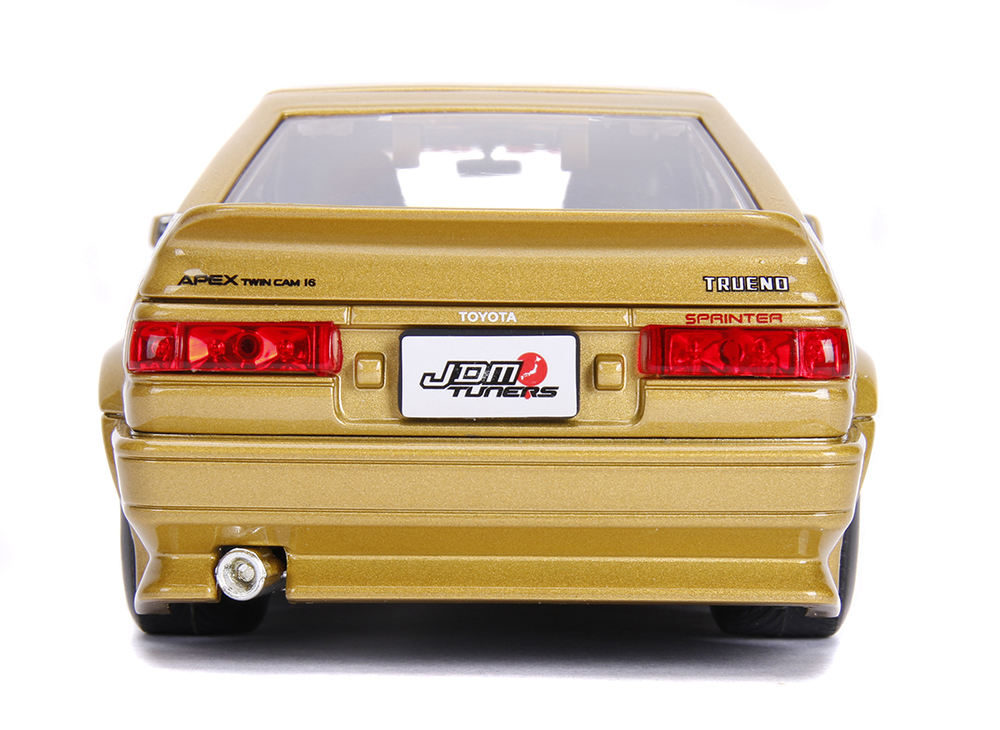 The fascination with the AE86 family of Toyotas—the JDM-exclusive Sprinter Trueno and the exported Corolla Levin/GT-S— is an unlikely one. After all, we’re talking about a mid-80s hatchback economy car that came with less than 130hp. There is no question that the AE86 is infinitely more popular now than it was when new, and that is all thanks to two things: the JDM-invented sport of drifting, and the drift-inspired Initial D manga (comic book) and anime (animated TV) series which helped propel the regional sport into an international cultural phenomenon. The AE86 is the hero car of the Initial D series precisely because the ultra-light, rear-drive, solid-axle hatchback is perfectly suited to sideways driving—so much so that surviving examples are now highly sought after to convert into drifters! Jada’s AE86 is the Japan-only Sprinter Trueno version—a true JDM car!—and with its deep-skirt body kit, blacked out hood, and aftermarket rolling stock it very much has the look of a drift car. And like the GT-R the AE86 comes with a caged interior. 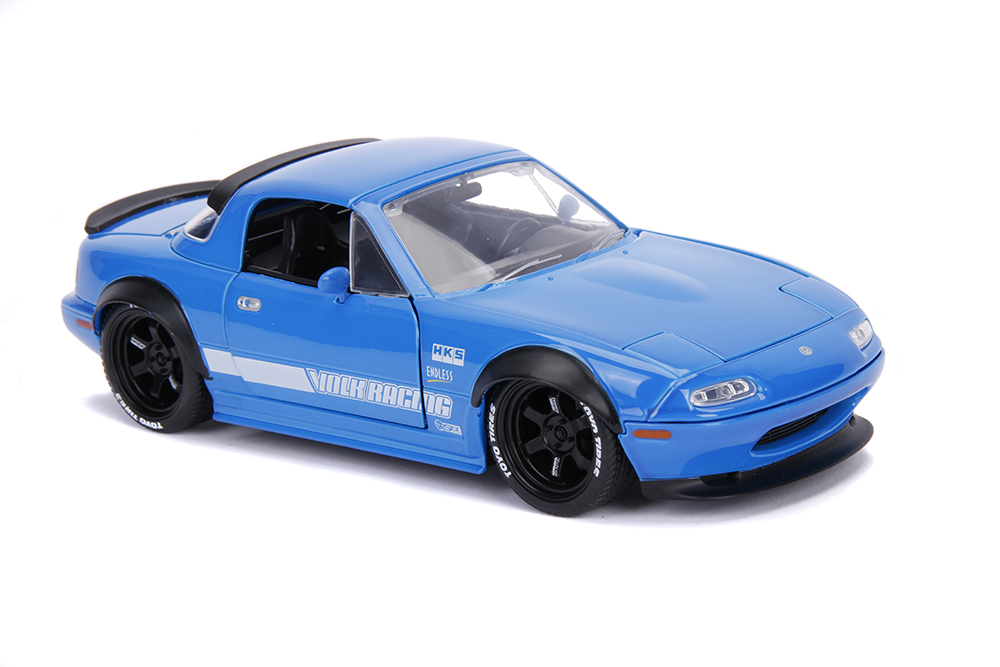 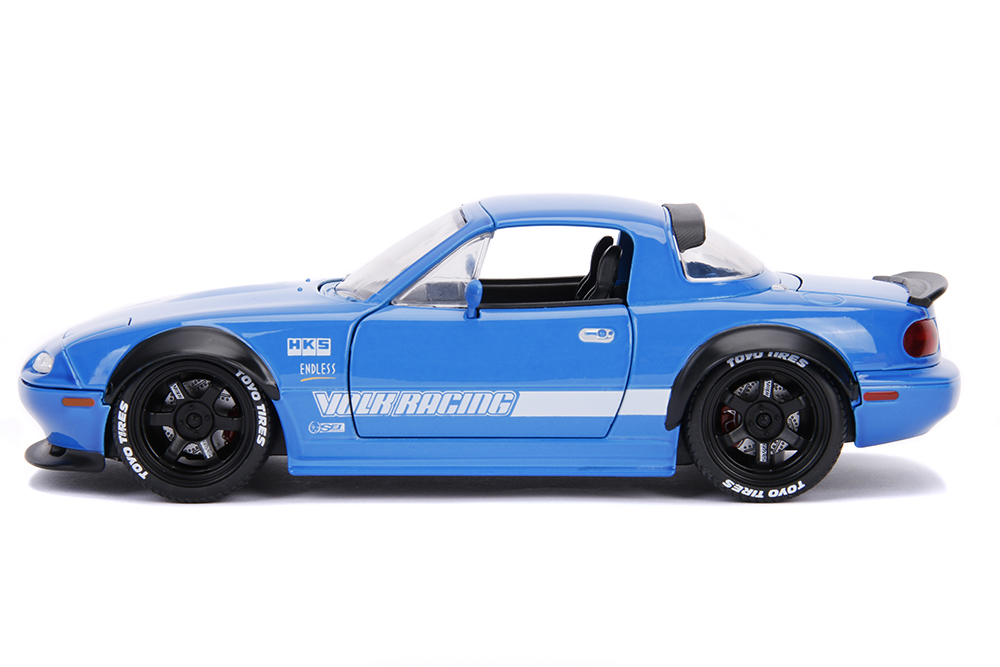 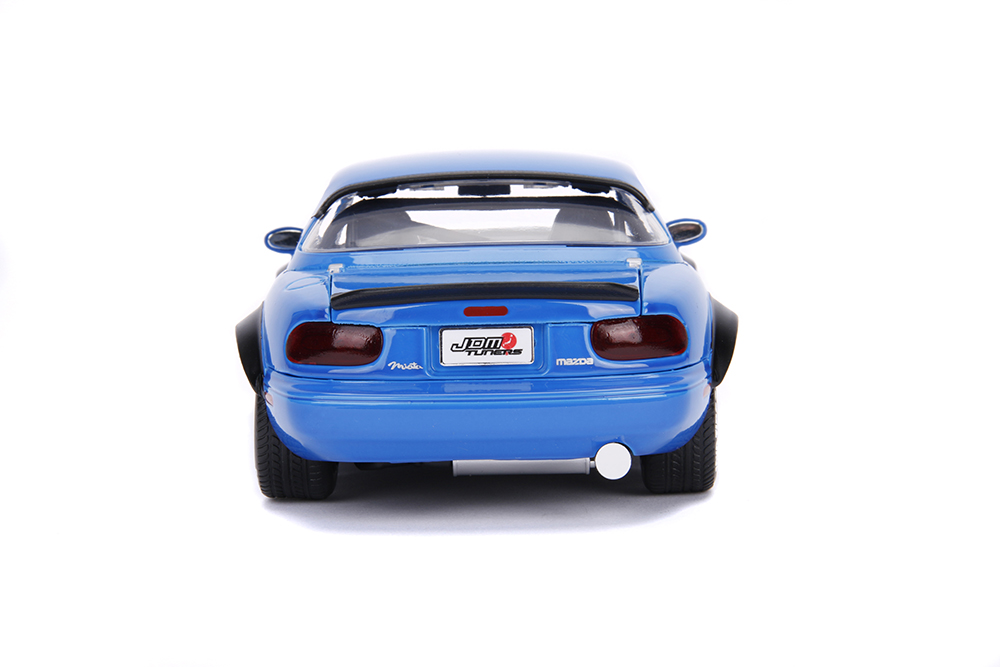 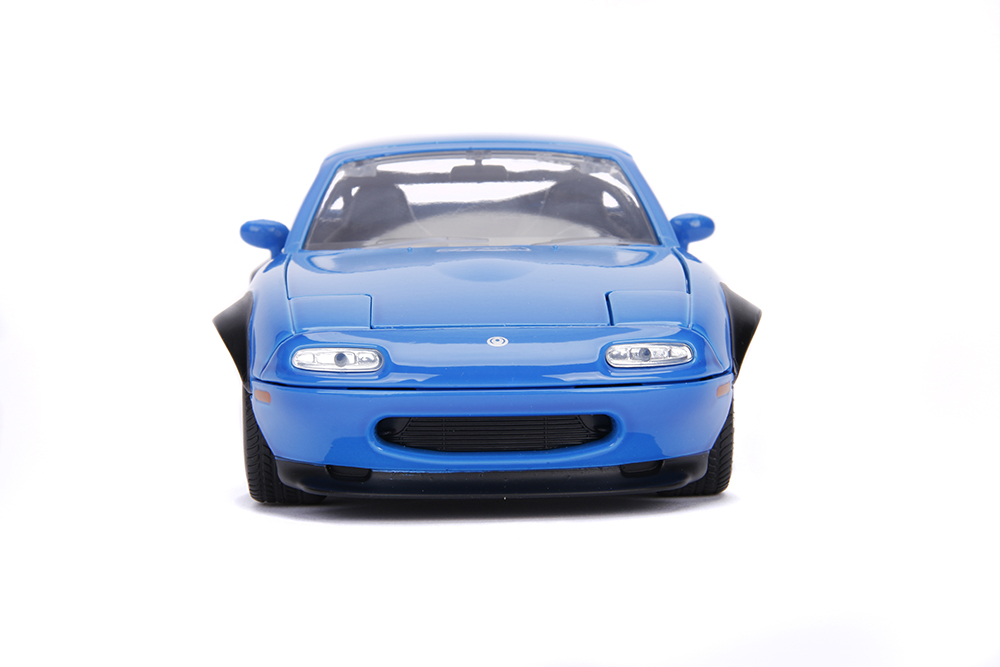 If there is any vehicle of the modern era that has inspired a cult following to rival the all-time classics it is the modest little Mazda Miata. This car singlehandedly resurrected the affordable sports car genre that had been dominated by British roadsters like MG for decades. When it debuted in 1989 who could have predicted it would become the best-selling 2-seater in history with more than 1 million produced? Its mix of light weight, perfect balance, cute styling, zingy 4-cylinder, affordability, and surprising practicality added up to an irresistible formula. For many, the first generation “NA” is still the purest Miata, and that’s the one Jada has modeled in 1:24. This one features the removable hardtop that was a popular option with club racers, and it has been further enhanced with a front lip airdam and spoilers on the trunk and roof  trailing edge. There are also brows over the wheel arches to give extra clearance for a wider set of Volk Racing TE37 wheels wrapped in Toyo-branded low-profile performance tires, and decals for tuner staples like HKS (turbos), Endless (brakes), and the aforementioned Volk Racing wheels.