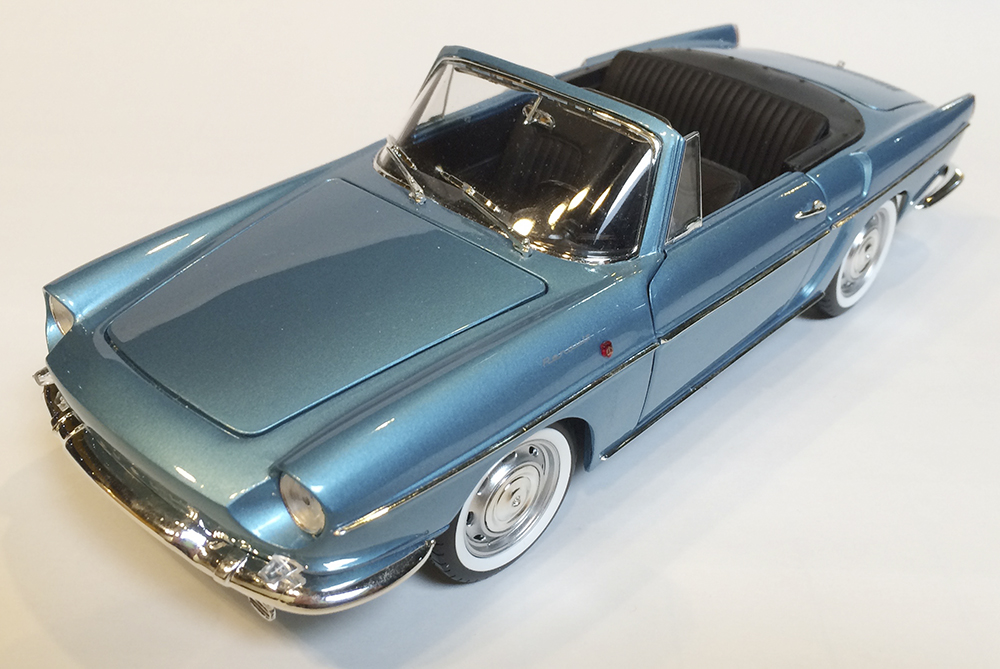 In the issue of Die Cast X due out later this month (Spring 2018) we took a look at a model of a fast, swoopy marvel of sports car engineering from Renault: the Alpine A110 recreated by Maisto in 1:18. This time we’re checking out a model of an earlier, somewhat slower, but still gorgeous Renault sports car. The Caravelle first debuted in 1958, and with its tiny tailfins looked very modern at the time. The Ghia-penned body had a very short wheelbase with relatively long overhangs, and if you squint real hard, it sort of looks like an Amphicar, but in a good way. It had a surprisingly clean face for its era, partly because, as a rear engine car, it didn’t need a grill up front. The Caravelle could be had as a coupe or a convertible with an optional hardtop. 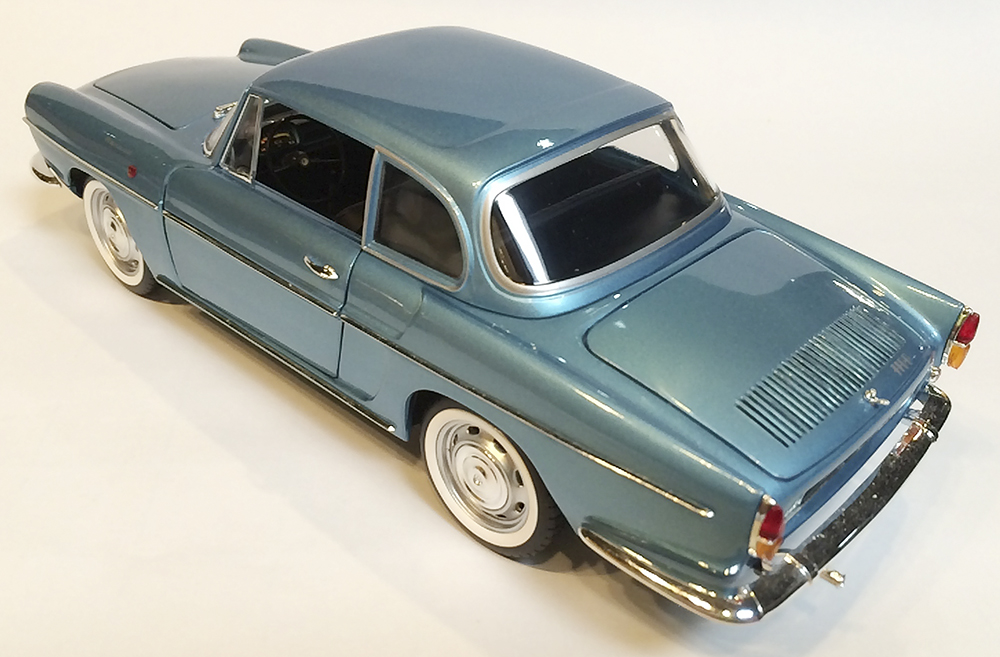 The car was originally called the “Floride” but in the U.S. market Renault thought that all the states not named “Florida” might be turned off, so they renamed it “Caravelle” and used that name for most markets outside of France. It’s hard to judge how successful the Caravelle was. Renault sold as many as they could possibly make, but their production was severely limited by the company’s failure to foresee the booming French economy in the 1960s. Renault likely could have sold a lot more of all their models if they had had more manufacturing capacity. Renault introduced a larger engine to perk up performance, but the styling was starting to look dated, and in the face of newer, less expensive sports cars being introduced throughout Europe the Caravelle ended production in 1968.

Norev made a beautifully detailed 1:18 model of the 1964 Caravelle with an impressive assortment of textures and finishes to compliment the details. That profile that had begun to look dated by the late ’60s looks downright charming here. This one has a perfect “Finlande Bleu Metallic” finish offset with lots of separate chrome bits and reflectors molded in the appropriate colors. The combination of whitewall tires, steel rims, and chrome hubcaps is indicative of the thought that went into the materials for this model. 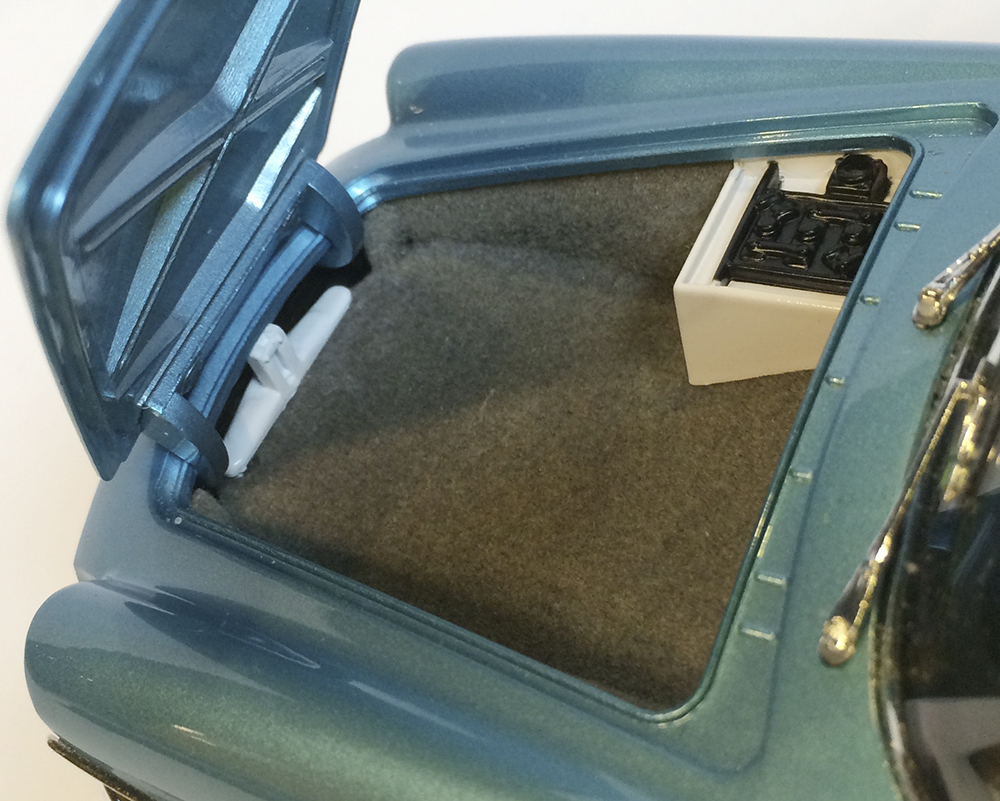 Since there is no engine up front, you get a flocked trunk—empty except for the battery. The same gray flocking is used on the floor of the interior, really giving contrast to the the otherwise black interior. The doors have separate chrome window cranks and handles as well as thin silver piping, something you don’t see on a lot of models. The seats are a soft rubbery material, and have additional chrome trim on the sides. For a sparse interior, there’s a lot of detail. 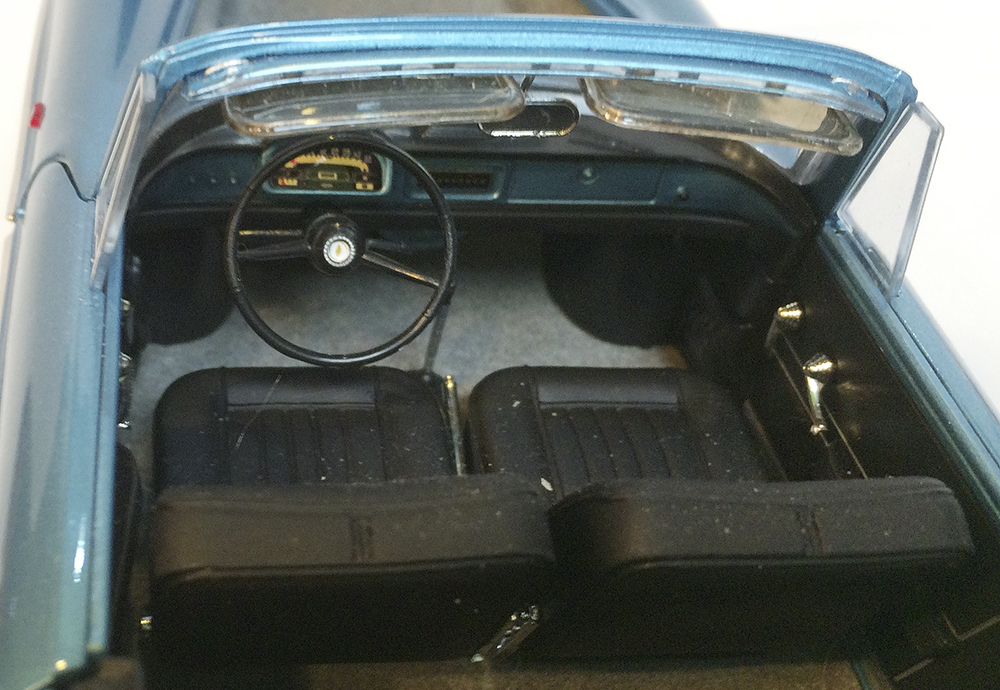 There’s also a convertible boot that has just enough wrinkles in it to look real. If you remove that boot, you can snap on the optional hardtop, which gives the car a much taller, more formal (and less sporty) profile. Around back, the decklid has all the vent slots cut out, almost unheard of in models this size. You can even see the engine through the slits. The tiny plastic handle for opening the trunk is a marvel of miniature design. The engine has parts in several colors including the engine wiring and hoses. One detail Norev didn’t quite get right, however… the radiator on this model is located in front of the engine, as is was for the early small block cars. For the larger blocks, like this model represents, it should ride behind the engine up against the rear grille. Quel dommage… 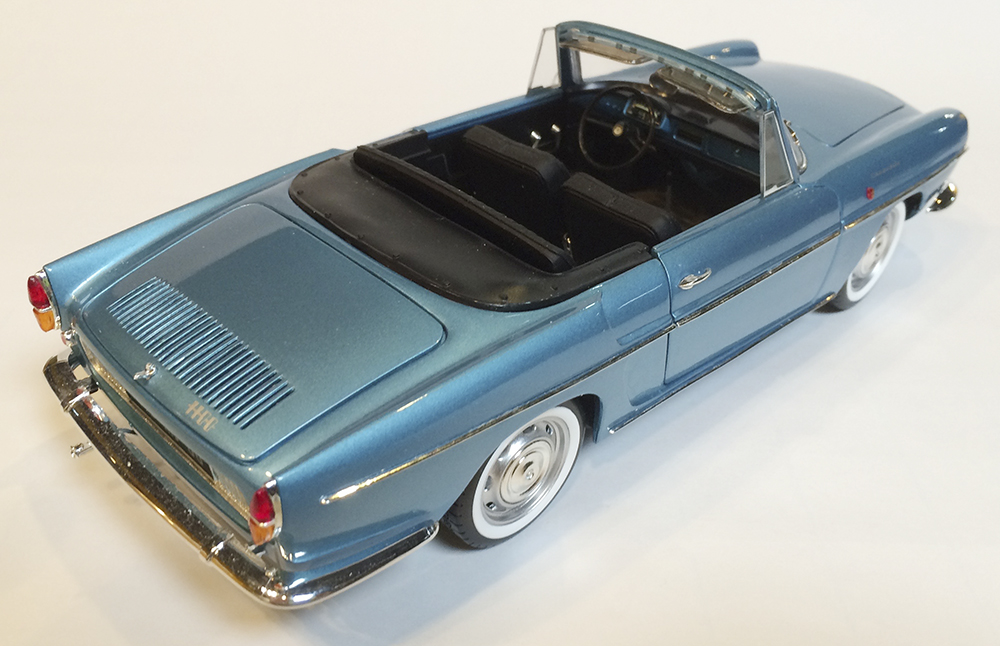 Time has been kind to sports cars of this era including the Caravelle. The dated styling is now considered classic (never doubt the folks at Ghia!) and the limited speeds are acceptable considering the car’s handling characteristics. C’est bellissimo!

Ron Ruelle is Social Media Guy at hobbyDB, a website about anything and everything collectible.