Masterworks from the 1/18 Custom Diecast Syndicate

We’ve been spending a lot of time lately on the Web and social media admiring the brilliant custom work being done by some genuine artists in the world of diecast. One place where many talented builders congregate is on the 1/18 Custom Diecast Syndicate Facebook group. After chatting with Syndicate group moderator Giannis Lo, we came up with the idea of asking the group members to submit some of their builds in the custom muscle/restomod category. The models on the following pages are some of the most interesting submissions. We made an effort to select a broad range of cars; many different price points and skill levels are represented. We wanted to show some of the “pro” level builds, of course, and we’ve got some that feature truly jaw-dropping craftsmanship. But we’ve also selected some tastefully executed versions of less complex builds, giving those of you who are thinking about getting into customizing some ideas on the kinds of things you can do on a modest budget and without years of building and painting experience. So let’s take a look and find out a little about what went into each of these modified muscle-car models. 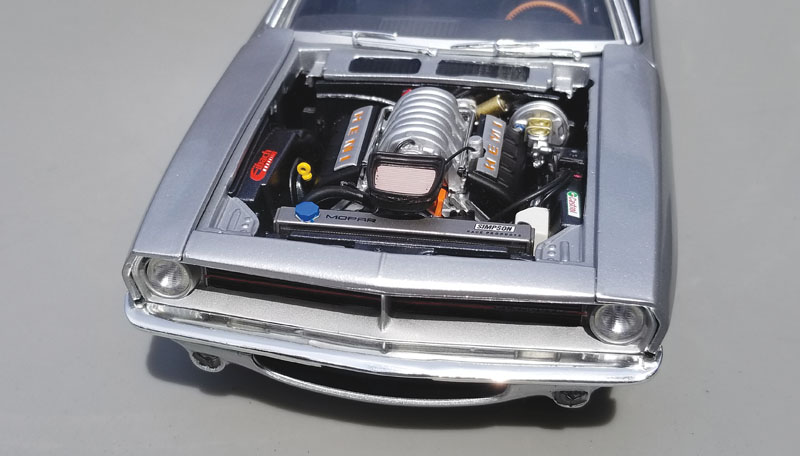 The concept behind HellFish was to create a Pro-Touring ’Cuda built around a modern-day Hemi motor. Damon built it from parts of several different Highway 61 ’70 ’Cudas, and sourced the last few remaining parts with help from friends from the Syndicate Facebook page. He lowered the suspension over a set of 20-inch BBS wheels designed by Uli Nowak, and installed photo-etched brake rotors with resin Brembo calipers. He added a resin Optima battery and relocated it to the trunk. The interior got new front seats and belts, a pedal set, and a new steering wheel. There’s also an oversize fuel tank, a custom radiator, and a new exhaust system, plus an aluminum driveshaft and a reworked rear suspension, with the leaf springs replaced with coil-overs. Body mods include shaved mirrors and door handles, cutouts in the rear valance for the exhaust tips, a ’71 lower front valance with driving lights, plus a modern-style hood scoop to cover the enlarged opening needed for engine clearance. Damon finished off HellFish with a coat of silver paint, making for one sterling modernized Mopar! 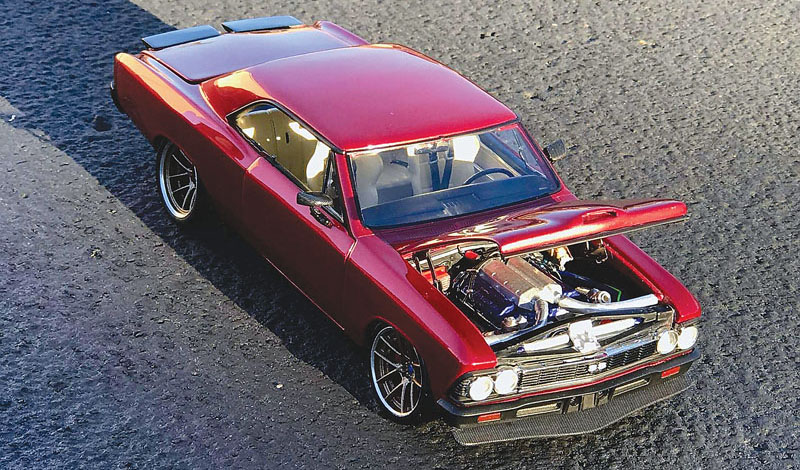 Giannis built this ’66 Chevelle—which he named “Nemesis”—for his good friend Rob, who sent him the original Auto World Chevelle for an overhaul. What Giannis produced is his vision of the ultimate street restomod. He stripped the trim, added a carbon-fiber aero package and rear diffuser, and painted the whole thing Electric Currant Red. Under the custom hood sits a 572ci big block with a pair of 7475 Precision turbos with dual wastegates and a custom intercooler backed by a TCI transmission. Out back is a methanol tank, dual fuel cells, and diff/oil coolers. The suspension features tubular A-arms, upside-down coil-overs, and oversize brakes behind Rotiform RNA 20-inch wheels. The interior got custom bucket seats with 5-point harnesses, digital gauges, and a Jerico-style shifter, making it one of the most complete restomod makeovers you’re likely to find. 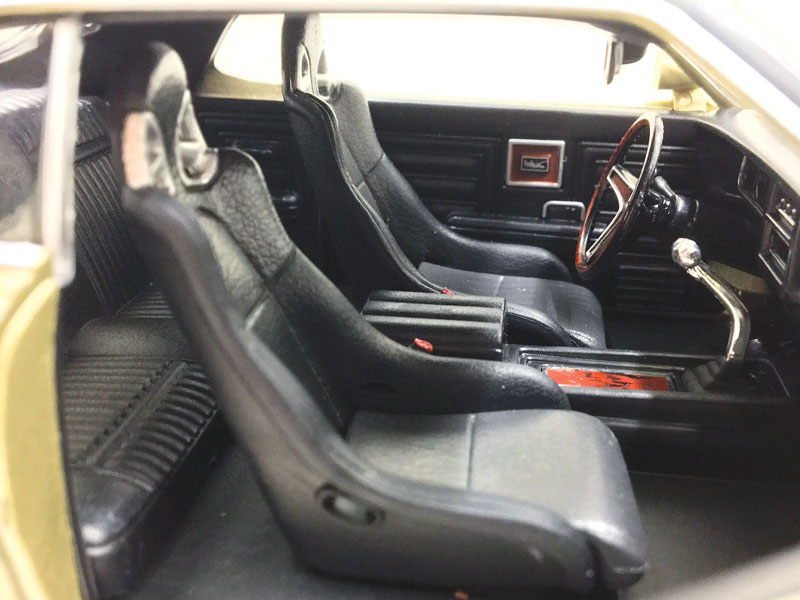 Thierry got into building casually about six years ago and has completed 15 cars, including this subtle modernized Mercury. He started with a Cougar XR7 from Welly and treated it to a few well-chosen mods to produce a great budget build. He lowered the suspension and selected a set of GMP wheels and tires, and removed the yellow sidewall lettering for a more reserved look. For power, he pulled the supercharged “Terminator” DOHC 4.6 from a Maisto 2003 SVT Cobra Mustang with a custom intake, and repurposed the ’Stang’s exhaust tips for his side pipes. A Maisto Porsche Carrera GT supplied the seats. The production Welly paint looked pretty classy, so he kept it. Thierry’s Merc is proof that you don’t need to spend huge amount of money on donor cars or parts to make a great-looking, personalized custom muscle car. 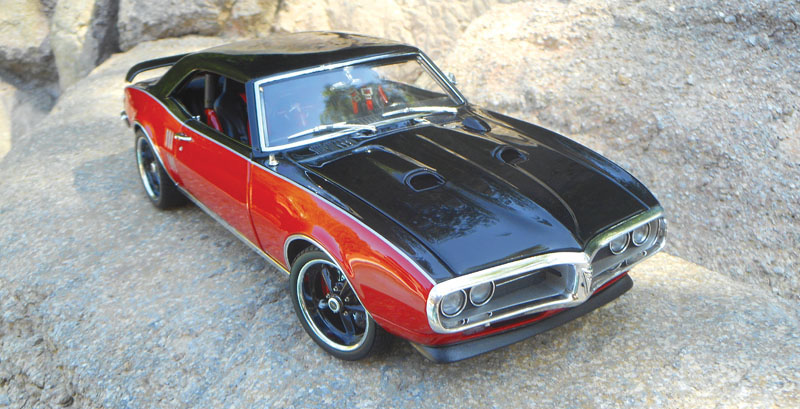 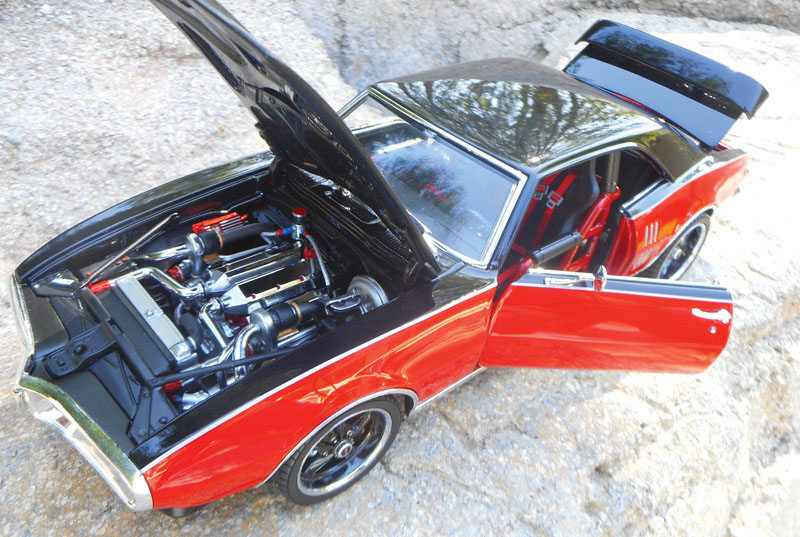 Gabriel started with kit models when he was seven and has been building ever since, switching from plastic to diecast about 18 years ago. He calls this creation the “Fathers Firebird”—a twist on the famous Mothers Camaro. The base car was a Guycast-exclusive version of the Lane/Exact Detail ’67 Firebird. He built it for fellow Syndicate member John Kieffer, who supplied the photos you see here. For power, Gabriel transplanted the twin-turbo small block from the GMP Streetfighter ’68 Camaro, after adding additional paint detail. He changed the interior to black and hand-built a roll cage. He repainted the Streetfighter wheels and installed the center cap from the Firebird wheels on them. He did that for the steering-wheel horn button as well. He ceramic-coated the exhaust and changed the tips, then installed a ’69 Firebird-style rear wing and a custom chin spoiler off an import tuner car. For paint, he sprayed black on the top half over the stock red, laid down a silver-tape stripe, then clearcoated the whole car. Gabriel tells us he does automotive paint and bodywork for his day job, and his pro experience definitely shows with this stunning Firebird. 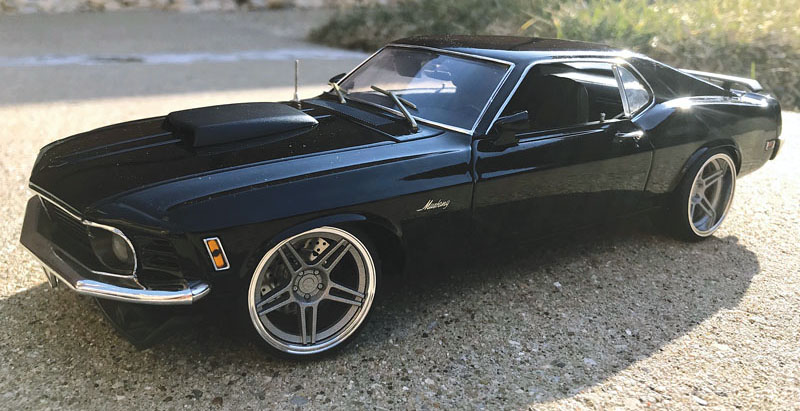 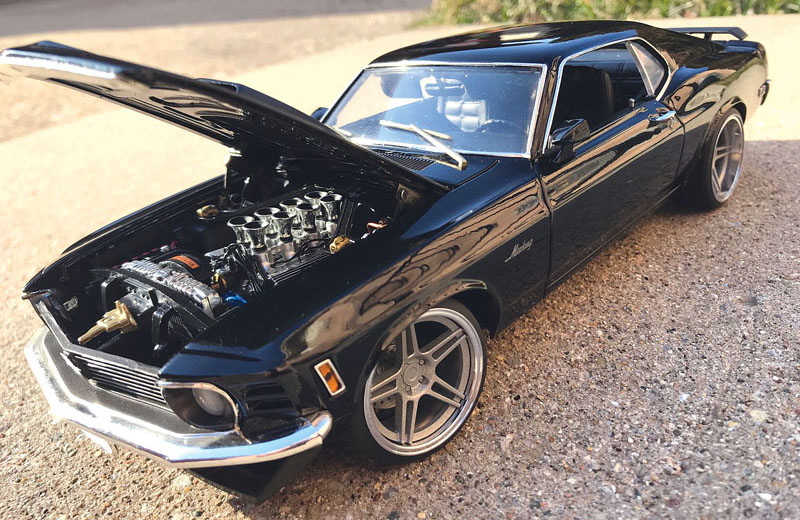 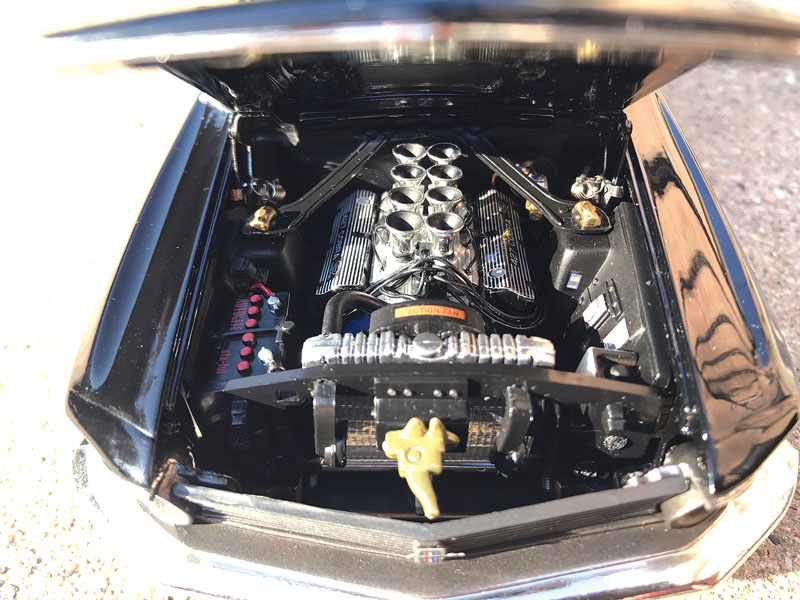 Andy started with a pair of Highway 61 ’70 Mustang fastbacks for this build: a custom Boss 429 drag car and a stock Mach 1, both in black. His goal was to replicate a specific full-size custom Mustang he had photos of, and he did a masterful job. The Mach 1 supplied the main bodyshell, while the drag car supplied the hood and rear wing. The fuel-injection manifold and stacks came from a GMP Drag Hemi, and were combined with pieces from both donor engines. He scored a set of resin headers from Shapeways. Dave’s Decals created a set of custom water-slide decals to re-create the vein pattern of the Cobra valve covers. Andy redid the interior with charcoal gray flocking and corrected the seat belts. He lowered the suspension to replicate the original car’s stance, and installed two-piece wheels from Uli Nowak, repainting the insert a stainless-steel color. Meet the new Boss!

Here, we have another first-gen F-Body con­vertible. Paul started with an affordable Road Signature 1969 Pontiac Trans Am, and like others on this list, he too sought to emulate a specific 1:1 custom. For the engine, he looked to GMP’s Chevy Z/28-spec 302 for the basic block, then added his own scratch-built intake-manifold plenum and runners for its custom fuel-injection system. He borrowed wheels from GMP’s Gulf Camaro and stripped them down to the chrome. For the interior, he chose not one but two pairs of Ertl Corvette seats, so both the front and rear occupants ride in style. Paul cut the headrests down so that they fit at the appropriate height. An Ertl Camaro supplied the convertible boot, while a Roush Mustang donated the roll bar. The visors are from a ’77 T-Top Trans Am, and the side mirrors are from a ’70 Camaro. The chin spoiler came off GreenLight’s Daytona. The center console is scratch-built from styrene, as is the custom side-exit exhaust. And underneath, the rear axle has been converted to coil-overs. This T/A is grade A! 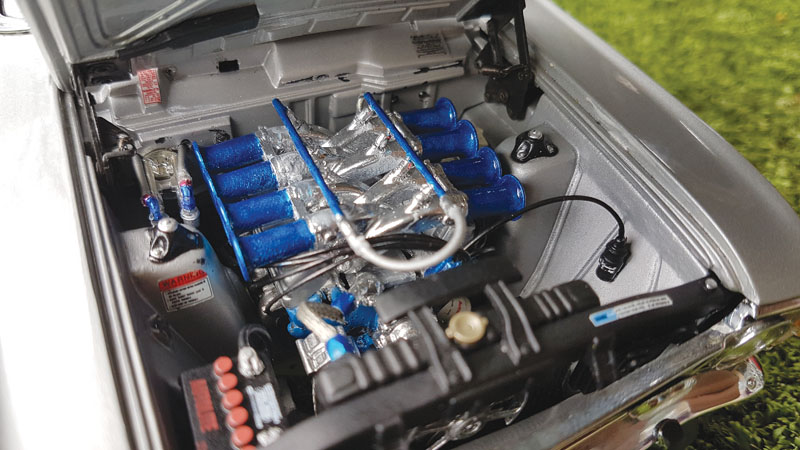 As you might tell from the subject of his build, Joel is from Down Under, and we actually first approached him about a different Aussie custom: a 1976 Holden Torana SS with a wild turbo LS3 swap. He is still working on that one, so he suggested we take a look at his ’69 Ford Falcon XW sedan—and we liked it even better! It started life as a Falcon XW GT-HO Phase 1 from AUTOart/Biante, and other than the upgrading of the wheels and carburetor to GMP pieces, this is how stayed for almost five years. He had acquired a 3D-printed cross-ram EFI manifold for a big-block Chevy from Shapeways for a different build but adapted it for use here. The cross-ram is so large that Joel had to relocate the upper radiator hose and distributor, and he fabricated fuel rails, injectors, and a lifter-valley cover out of styrene, before painting the manifold silver and the rails and intake trumpets metallic blue. 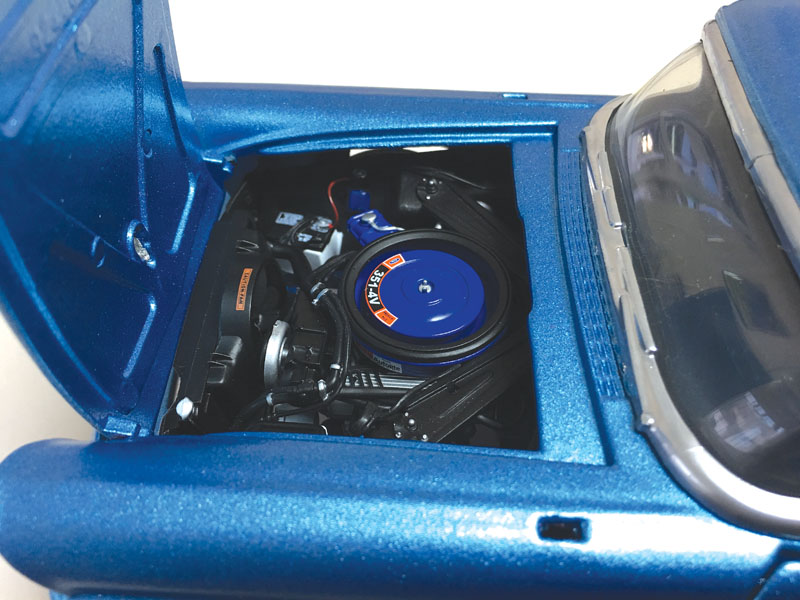 Eduardo is from Spain, but he has a fondness for classic American cars and decided to spruce up a budget Road Legends 1957 Ford Ranchero Courier Sedan Delivery. He didn’t like the ugly garnet primary color or the raw black plastic roof, and the engine was toy-grade. He addressed the color by first removing all the trim and sanding down to bare metal and then spraying Dupli-Color beige primer on the body and the roof to get a consistent base between metal and plastic. He then shot Rust-Oleum blue metallic from a rattle can over both. He resprayed the chrome trim to remove the “plasticky” look to them, then reinstalled it in the now-blue bodywork. The wheels and tires were cribbed from a Corvette Stingray, and Eduardo installed a salvaged engine/firewall/inner fender assembly from an AUTOart ’71 Mustang—the 351 Cleveland fits like a glove! For the interior, he covered the floorboards in red flocking and installed seats from a scrapped Lamborghini. He finished off the Ranchero with a set of custom decals he had made by a company in Spain, and posed it in a garage diorama for photos. 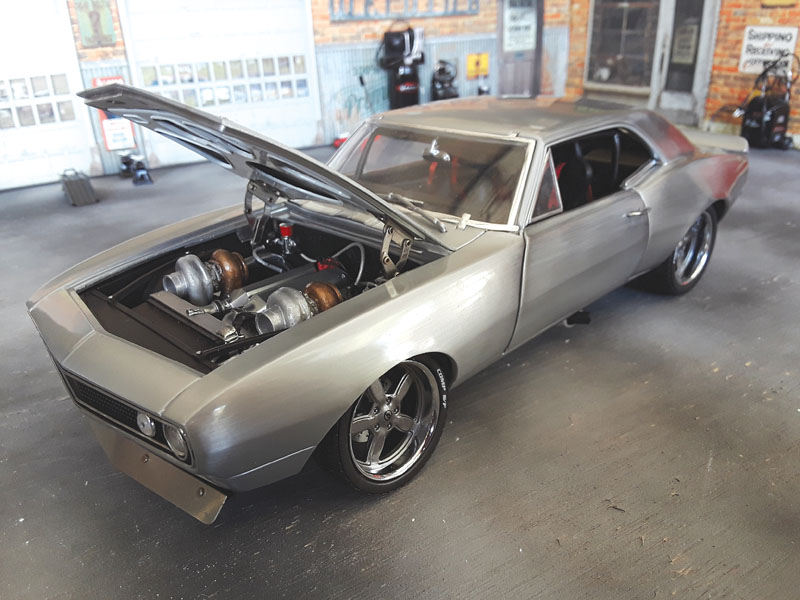 Michael has an impressive collection of augmented Camaros, mostly based on GMP’s first-gen casting. One of the coolest is this brushed-steel ’67. It started as a special-finish Z/28 Trans Am–spec racer, but Michael saw potential for something a bit more exotic. In his note to us, he joked it was his vision of a Pikes Peak contender! To help make sure that high-altitude air doesn’t rob too much power, he swapped on the fuel-injection manifold from a Streetfighter Camaro and a pair of giant turbos made from a resin kit by Michael’s friend William Darosa. Michael swapped in the interior from the Streetfighter too, as well as its set of GMP 5-spoke wheels and low-profile street tires.

Final Thoughts
There you have just a small sampling of the creativity and skill on display among the members of the 1/18 Custom Diecast Syndicate. Thanks to all the Syndicate members who submitted builds, and a special thanks to Giannis Lo for helping us connect with them. To all of you customizers out there—experienced or just starting out— keep building! And connect with us on Facebook/diecastxmag to show us your creations. While you’re at it, check out the 1/18 Custom Diecast Syndicate group page, too—it’s a great community, full of information and inspiration for any aspiring builder.

by the DCX crew