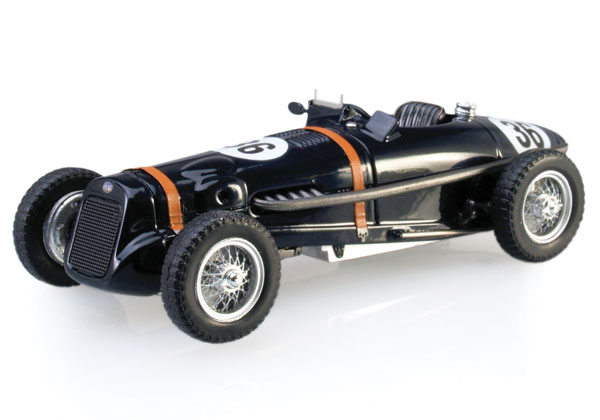 Few single cars have generated this much history: First, this Delage was part of the team that won every (yes, every) Grand Prix in 1927, then, in 1936, Dick Seaman drove it to dominate voiturette racing so thoroughly that he earned a spot on the 1937 Mercedes GP team. Siamese Princes Chula and Bira (White Mouse Racing) bought it from Seaman, and had Delage build a new independent front suspension chassis, and replace the aging Delage straight-8 with a new six-cylinder ERA engine for the ’37 GP season. The parts of this car and two others were jumbled during wartime storage; Rob Walker bought the IFS chassis, ERA engine, and enough parts in 1946 to rebuild it for Rob Walker Racing. Still in his signature dark blue, it’s now in the Mullin Collection – and the subject of this little gem of a model. The resin castings are clean and crisp, paint is excellent, and the IFS chassis, six-cylinder exhaust, and rear suspension details are all just as they should be. Check out the plumbed oil tank and shifter to the left of the drive shaft, pedals, and detailed gauges in the cockpit. The photo-etched wire wheels and polished knock-offs match photos and yes — those are hoses to the big drum brakes. Yet another Minichamps masterpiece – and another reason to visit the real cars, some day. – Wayne Moyer